Falling off the wagon (or bike)

I can’t believe that in the five of six years that I’ve been getting into triathlon I’ve not come off of my bike. I’ve had a couple of close shaves and have seen a couple of nasty crashes but somehow I’ve gotten away with being the one going down. Well, until earlier this week that is!

I was out for a long ride and about 13 miles from home I was on a small country lane. It had been raining a little overnight and the roads were not fully dry. As I followed the road around a right hand bend the next thing I new was the bike had just slid out from beneath me and I was falling to the ground. I wasn’t going particularly fast at all. I thought I was being fairly cautious and had no chance to get any ‘real’ speed up as the road had lots of speed humps.

Next thing I’m sliding along the road to a standstill. The road was very smooth (which is good as it didn’t tear my £150 pound bib-shorts!) but the smoothness was no doubt a large contributor to what happened.

I pulled myself back up, picked up my drinks bottle that had ejected itself from the bike and assessed the damage. Bike - scuffed handlebars and a very scuffed right pedal (all that sliding on the road!). I took it worse than the bike by getting a large scrape on my right thigh and shoulder. I also somehow bashed my left hand/wrist as well and cut my thumb. 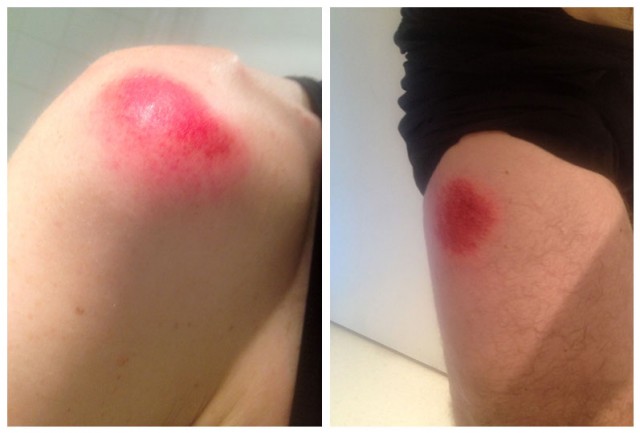 So, as you always see if you see crashes in cycle races such as the Tour de France it was time to MTFU and carry on. Although I was much more cautious during the hours that followed I got a decent bike ride in that day.

My shoulder/thigh will bruise and scab over nicely, that’s for sure. My left wrist has taken a right knock and I got it looked at by a professional yesterday. We (well, she) thinks there’s no bone damage and its most likely just soft tissue related. I’ll give it a few days and see how it goes.

Unfortunately (I can’t believe I’m saying this!) I really cannot swim at the moment because of this. Hopefully my wrist will be better in a few days time so that I can get a pool swim in before a little race I’m doing next weekend.