I’ve decided I mustn’t over-do the swimming. What I really want to do is build up some bike fitness again. Perhaps the lacklustre ride on Friday was partly to do with acclimatisation - at least I’m going to use that for part of the reasoning, especially after spending Saturday evening reading through the ‘diaries’ from Russell Cox’s visit to the big island in 2010.

When I woke up this morning (at 5:30am) my foot wasn’t noticeably more painful than before yesterdays run so I’m taking that as a big positive. However, up on my left thigh it really really aches. It’s like I’ve been given a *massive* ‘dead leg’ or something! Very bizarre. It was fine when I went to bed, and then I woke up it hurt! I’ve probably pulled some unknown and very unused muscle from yesterdays ‘run.’

Anyway, my plan today was to head up the Queen K (I’ll explain the name of the highway in a another post) towards Kawaihae. Provided my leg didn’t fall off first!

For my bike rides I’ve been taking three bottles of drink with me - one between the handlebars, one on the frame and another in my jersey pocket. When heading north out of Kona there’s pretty much nothing but highway for about 35 miles. I froze one of my drinks bottles overnight and that was the one in my back jersey pocket. It was lovely having something cool against your back.

The weather this morning was really hot. Temperature is in the very high 80’s. There were hardly any clouds in the sky. I put plenty of suncream on and set off in the same direction as on Friday. The frozen drinks bottle was completely thawed out within an hour.

After Fridays shocker of a ride I planned to take things a little easier today in the hope that I wouldn’t blow up and would ultimately be a little quicker overall. The winds were really light (or non existent) heading north to Kawaihae. Where I was being thrown around on the bike on Friday just wasn’t happening today. It was great.

Today I saw my first (no doubt of many) sighting of a triathlete being motor-paced down the highway. Haha, after seeing it in videos it really does happen here in Kona.

An hour and 50 minutes later I’d reached Kawaihae. I stopped at the garage (er, I mean gas station) and bought myself a feast! Drinks bottle top ups, a litre of coke and a banana-nut muffin. This was just right for a picnic down at the beach! Back on the bike and about a mile and a half away is the Samuel M. Spencer Beach Park.

At the beach I parked the bike, took my shoes off and went for a stroll along the waters edge. There were quite a few families there enjoying their Sunday morning. It’s a great looking beach and a fine spot for a little breather. I chatted to a couple of locals ‘Are you here for the Iron-man?’ and then sat by a tree and took in the view (and my muffin, which was bloody lovely). 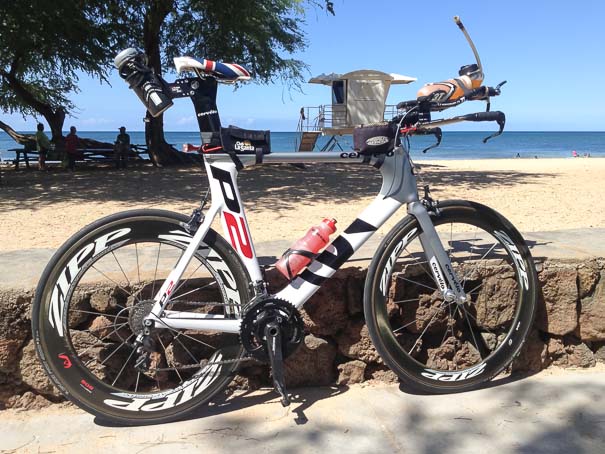 Oh how wrong was I. Within a couple of minutes I had a headwind. All the way back to Kona.

It’s funny, when I was in Lanzarote in April and May of this year much of the race specific training I was doing was trying to get used to riding into ridiculously strong headwinds as that seems to be the norm for most of Lanza. I also cursed a little at the seemingly never ending ‘Fire Mountain’ section of the Ironman course.

Well, that’s nothing compared to here. The Queen K segment of the Hawaii Ironman is literally 32 miles of fully exposed highway (you do it twice, once up, once down). It glides up, and down, and up, and down. Oh, with a headwind all the way. Lanzarote, although hillier is like Hawaii’s little cousin. If you’re wanting to train for this course, get yourself on a time-trial (TT) bike, get down on the aero bars and pedal. And pedal some more. For a few hours. Do it indoors on a turbo trainer with the heating on full blast and the doors and windows closed. Oh, and put a hair dryer on pointing at your face. That should do you fine for this part of the course.

The hillier part of the course (Hawi) I’ll explore in a few days time and report back!

The road in the distance was giving off a heat mirage flickering away. A couple of miles outside of Kona I caught up with a chap on a road bike and we got chatting. He lives here and with his wife they manage the first special needs aid station for the pro-athletes on the run course at the Ironman. He said he remembered Chrissie (Wellington) coming through a couple of years ago looking so focussed and not a hint of a smile. On the way back to the finish the trademark smile was back. We had a lovely chat - and I balanced his bike after his chain snapped and he carried out a quick roadside repair.

When I got back to the condo it was early afternoon and I’d ticked off another 75 miles on the bike. I had a *huge* fruit smoothie (there’s a lovely blender here) and then kept an a close eye on a friend, Gary, who was competing in Ironman Lake Tahoe in the US today. The weather there (snow the day before) couldn’t have been any different. He’s had a pretty tough time during his training but today he delivered the goods and finished second in his age group. He’ll be here in Kona in 2014. Awesome. I thought about him a lot during my bike ride. I know that in three weeks time conscious that there’ll be people (virtually) cheering me on will really help. However you don’t have to stay up all night watching the Ironman on-line tracker ;)

Todays ride was so much better than Fridays. Maybe acclimatisation is starting to happen. Going out easier in the first half paid dividends, especially with the mild headwinds coming back. I was stronger on the bike (the power numbers were higher) but ultimately slower (because of the winds). My heart rate it also settling down a bit more.

After (virtually) cheering him in over the line I thought about going for a dip in the pool but decided that the ocean would be much nicer. I drove a couple of miles to one of the local beaches and had a little play in the surf. The beach was really busy, there were lifeguards on duty and when I got out of the water I saw a sign that said ‘Shark Sighting’ and that the beach was closed. 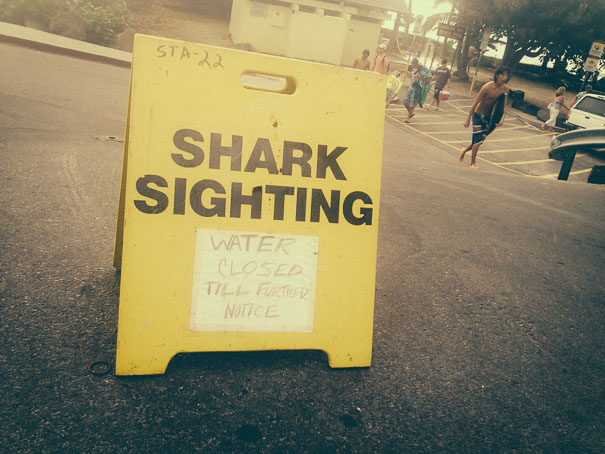 Well, with about 50 or so people in the water it didn’t look particularly closed to me! It reminded me of a tweet from Gina Crawford yesterday evening… 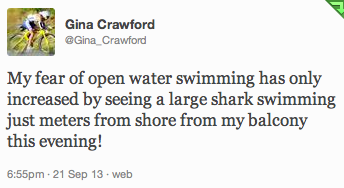 Well - that was my day today. Tonight (Sunday) I’m going to treat myself to dinner in town. Tomorrow morning I plan to get back in the ocean again for a reasonable swim. Regarding my foot/leg I’ll probably delay my second ‘comeback’ jog/run until Tuesday.

Plenty of time to get run-fit… the marathon isn’t for another three weeks!