Sleep by 10pm and awake just after 6 - just in time to watch darkness turn into day. It is lovely spending an hour or so on the lanai in the mornings. You look out to the ocean and most mornings you see some of those funky ‘outrigger canoes’ out training. They’re from the Kai ‘Opua Canoe Club who are based at Kamakahonu Beach which is right by the Kona pier where I go ocean swimming.

I headed off in the jeep into town to go for a little swim. A little swim for me at the moment is 1.2 miles, which is half Ironman-distance. The ocean was the calmest that it’s been since I got here. There were calm patches of water at sea - it really was tranquil. The water was also really clear too, either that or my goggles were having a good day! There were so many fish in the ocean. If there’s half as many during the race then it’ll be hard not to be distracted by them all!

At the end of my swim Sharon had arrived at the pier after running down from the condo. She kept on saying that it was ‘awful hot.’ I reminded her that I would be running a marathon in this in 12 days time. It was ‘awful hot.’

There’s some nice freshwater outdoor showers by the pier so I had a lovely shower. With (crazy but cute) Danish professional triathlete Michelle Vesterby. When I say ‘with’ I mean I was drying myself off whilst she was showering. Either way I wasn’t complaining!

We then headed over the road to Splashers Grill for breakfast. We both (that’s Sharon and I, not Michelle!) went for pancakes and watched as a super huge cruise liner unloaded loads of people onto the pier for a day of tourist stuff! 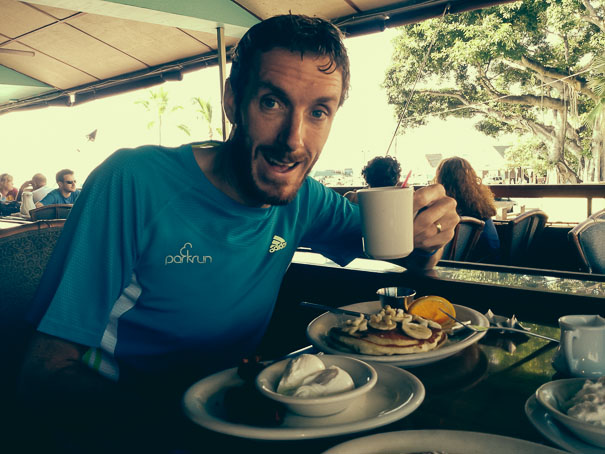 As the water was so calm I thought it would be a good idea to go snorkelling. Three miles down Ali’i Drive from where we’re staying is Kahalu’u Bay. We’ve got some kit that we bought about 15 years ago and it worked a treat. Although the coral wasn’t super colourful or anything the fish certainly made up for it. They were everywhere. It was really really cool. OK, we went at a busy time of day but once you got into the water it was easy to find plenty of free space to go exploring. As we walked into the water there were a couple of turtles playing in the water literally inches from the shore. They were nibbling on algae on the coral. It was ace. We saw fish including Picasso Triggerfish, Moorish Idol, Yellow Tang, Coronet fish, Racoon Butterflyfish, Threadfin Butterflyfish, Cleaner Wrasse, Yellowtail Coris, Redlip Parrotfish, Hawaiian White-Spotted Toby and more! Before you ask, we checked these names against a fish-chart after we’d been swimming - we’re not just awesome at everything… yet!

Here’s a few photos from this morning… 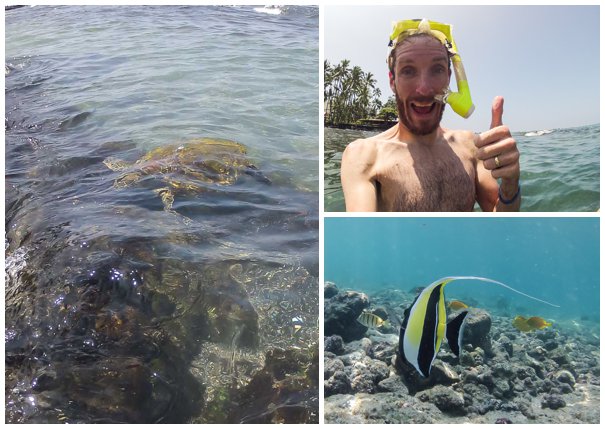 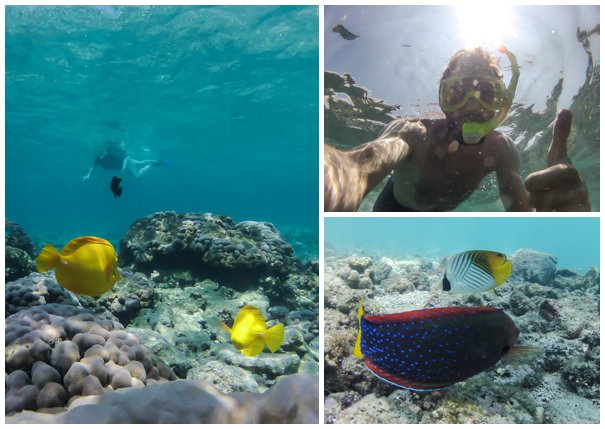 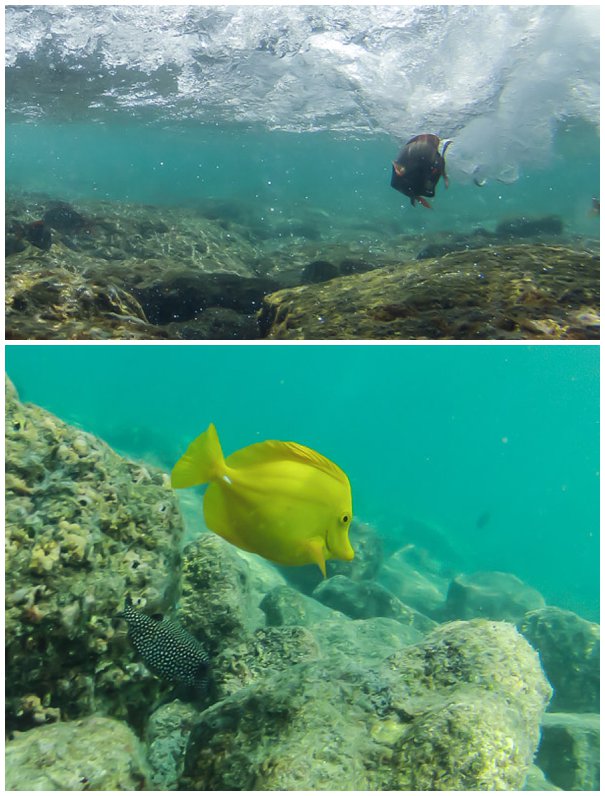 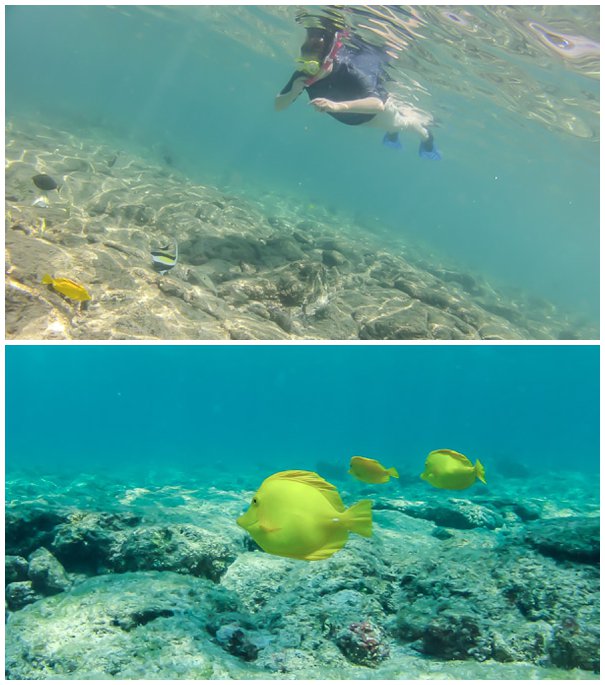 Back home for lunch whilst I tried to think of an excuse not to go for a run in the almost 90 degree heat. There was very little wind today so no chance of a cooling (or warm) breeze. Unfortunately by 4pm I couldn’t think of one so decided to go for it!

My runs so far post-injury (I say post-injury… I think I’m still ‘with’ injury but since I’m back running a bit) have been as follows - 1.8, 2, 4 and 6.3 miles. Today I wanted to do a little more so I ran into town (just over a mile away) turned round and came back. When I got to the condos where we’re staying Sharon was there holding out a water bottle for me (one of the ones I take on the bike) filled with sports drink and ice cubes. A quick kiss from the lovely lady at that ‘aid station’ and I was back off down Ali’i Drive.

With next to no breeze blowing it was boiling hot. I went for the super cool bare-chested running look - obviously with visor to look the part! I’ve not gone for the bare chest running with heart-rate monitor strap yet. Plenty of other people are though. Give it a few more days I say…

When I got back to the condo I’d run about 8.25 miles. Brilliant. No additional foot pain. The only pain was in my upper legs from all this running of late. This I have no complaints about. 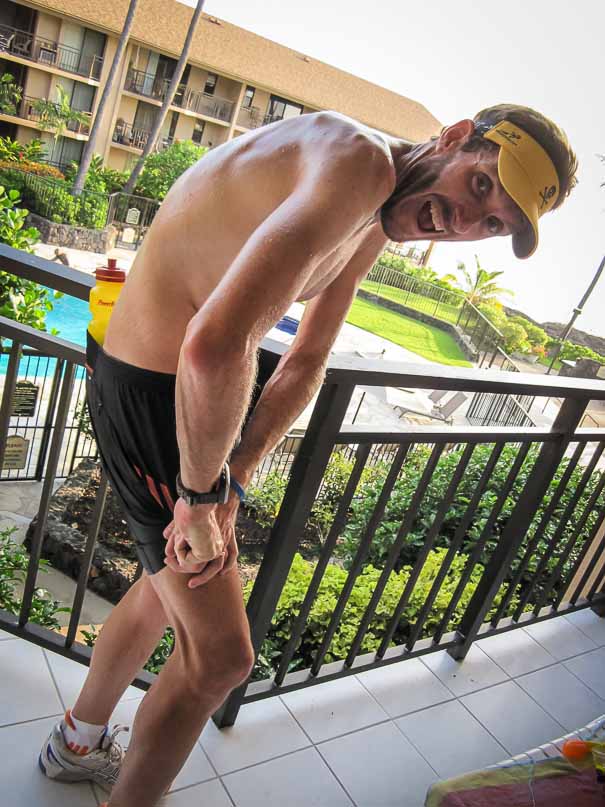 My lovely moisture wicking shorts that I had on today couldn’t cope at all with the heat. They were absolutely drenched with sweat. They were stuck to my legs! When I got back I took them off and wrung them out!! I’ve never wrung a pair of shorts out with sweat. Rain, yes - sweat no!

After a semi-refreshing cold shower Sharon and I sat down by the rocks on the sun-loungers they have where we’re staying and watched the sunset (and that bloody huge cruise ship that was getting ready to leave Kona for its next port of call). 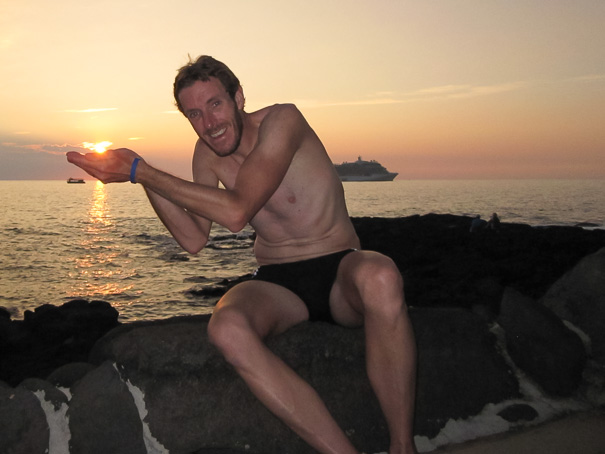 My attempt to stop the sun from setting failed to achieve the desired result.

I think however I’ll stay here another day or two…