Sunday morning. No such chance of a lie-in though of course. Woke up at 5:30am. Lovely. I was asleep by 10:30pm so seven hours sleep is pretty good. Last night (Saturday) Sharon and I went to Huggos for dinner. A lovely pre-dinner cocktail and then dinner right by the ocean. Bliss. I’ve also scouted out where ‘Breakfast With Bob’ is normally broadcast from so this info could be handy in a week or so’s time. If you’ve no idea what I’m talking about here then you don’t pass the “I’m obsessed with Ironman Hawaii” quiz! You’d best move on…

After reading about the crazy winds that the pro women were talking about yesterday I decided that I wanted to have another ride up to Hawi (which is 55 miles away from ‘home’). I didn’t want to do a 110 mile ride so Sharon decided to drive to Kawaihae (35 miles away) and meet me there after I’ve come back from Hawi - meaning that I’d get to ride about 75 miles. That sounded perfect.

There was a slight breeze this morning when I left the condo just before 8:30am. Heading up the Queen K highway…. actually, let me quickly tell you firstly why it’s called the Queen K.

The Queen Ka’ahumanu Highway (or Queen K) is named after Ka’ahumanu - the queen consort and also regent of the Kingdom of Hawai’i. She was the Queen consort of Hawaii between 1795 and 1819. According to Wikipedia…

A portion of the Hawaii Belt Road, state highway 19, on the Big Island of Hawai’i is named in her honor. It connects the towns of Kailua-Kona and Kawaihae. Often referred to by locals as “the Queen K,” it is used for the bicycle and running portions of the Ironman World Championship Triathlon. It also provides access to the Kona International Airport.

Back to today… heading up the Queen K highway the winds weren’t particularly noticeable. A good way to see how windy it is can be determined by looking at the clumps of grasses beside the road. If they’re going nuts, it’s windy! Simple. Today they were just moving gently.

Well.. not for long. At about 25 miles into my ride all of a sudden I got hit by a huge headwind. The grasses were going crazy and the wind wasn’t letting up. The atmospheric conditions must have just turned against me (when the lava fields heat up from the sun - it was a mostly clear blue sky - the hot air rises and cooler air takes it’s place from the ocean). It was really really blowing its socks off! At the junction of the Queen K and Waikoloa Road there’s a heliport and the windsock (and flags) were pointing directly at me from the direction I was headed. This was not ideal!

I got to Kawaihae (about 37 miles into my ride and stopped off for my usual drinks refills). I didn’t hang around at all, just a quick stop and then back on the bike for the 18 miles to Hawi. It was pretty breezy going up to Hawi, mostly cross winds pushing me around. What I’ve read (thanks to SportieDoc) is that normally if it’s really windy on race day more people end up in the post-race medical tent.

Records show that the stronger the winds at Hawi (key part on bike course) on race day - the higher the number of med tent admissions.

In windy conditions, athletes typically hold onto their bikes more, tense up, use more energy & forget to eat & drink. So energy output is higher but input is insufficient. Inadequate calories in on the bike, comes back to bite you on the run at which time its often too late.

When I got to Hawi I did a big u-turn and started heading straight back downhill. The winds were strong but not throwing me around too much. I think perhaps being a larger person (just under 80kg) no doubt helps. If I was a 49kg female then I can presume these conditions may feel much tougher. Because of this I’ll have some ice-cream later to ensure I don’t lose too much weight in the run up to the race!

It took me an hour to get to Hawi and 45 minutes to get back down again, and I didn’t push quite as hard coming back. It is a lovely rolling descent provided the conditions aren’t too nasty.

Once at Kawaihae I knew I only had a couple of miles to go before meeting up with Sharon so I stopped off at the gas station and treated myself to a litre bottle of Coke. The total ride was 74 miles. Just what I wanted to do today. I’m really happy with the bike mileage I’ve been getting in since getting to Hawaii - since arriving here I’ve ridden just over 420 miles. That’s like, er, normal training. My swimming seems to be going well and running is looking like it’s improving a little - just in the nick of time I might add!

When I got to the beach at the lovely Spencer State Beach Park Sharon had only arrived a few minutes before me. We found a nice little picnic table by the beach and I went for a little paddle in the sea before getting out and having a lovely cold-water shower to wash the salt water and sweat off of me. 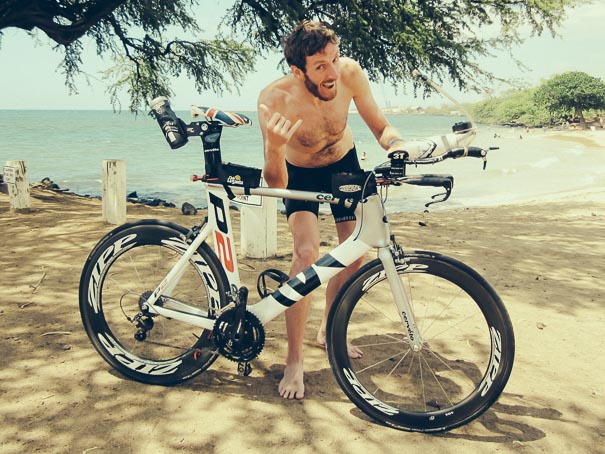 We then had a leisurely drive back to Kona after taking a couple of detours to look at some of the super posh mega resort hotels and golf courses on the west coast of the island.

Now… here’s the interesting thing. You hear these stories about the the wind changing direction during the race at Hawaii. Well, on the way back along the Queen K to Kona when I looked at the windsock at the heliport it had changed direction 180 degrees and was blowing just as strong as when I cycled into a headwind there a few hours ago. This place is nuts. Come race day, do not… and I repeat DO NOT expect a lovely tailwind back to Kona if you get a headwind going out on the Queen K. If the conditions are anything like today you’ll be battered in both directions. Oh what joy!

Once we got home and dropped off the bike we headed off for a few groceries and then walked up the road to a little beach about 10 minutes away to watch the sunset. Another day drew to a close.

Finally, todays ‘Sharkwatch’ update - Gina Crawford posted on twitter earlier that “The shark is back, swimming around outside our condo. All the surfers are out of the water!”

This place is awesome and after 12 days here really does feel like home! I’ve no idea how I’m going to cope back in the UK!