I was looking forward to Wednesday morning as Tom Williams from the UK had arrived in town late yesterday evening. Sharon and I know Tom really well and I enjoyed reading his blog a few years ago during his ‘Ironman years.’ When I first met him I felt I knew him already from reading his blog.

We also met up with Ian Osbourne who’s the editor of Triathlete Europe magazine. This is the finest of the triathlon magazines in the UK. Some great stories in there. It’s not full of kit reviews - it’s more of a ‘timeless’ magazine if you know what I mean.

My plan for today said I needed to be at the coffee boat at 8am. The sail wasn’t up on the boat this morning but I found this handy underwater sign on the sea bed that helped me. Oh, and the hundreds of swimmers who were heading straight for the boat! 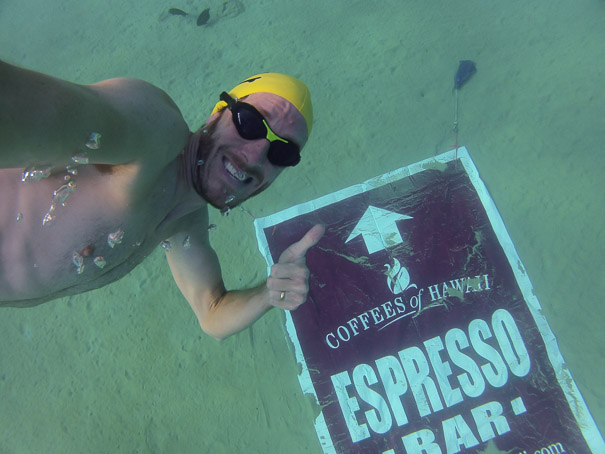 I told Tom that if you swim to the bottom and come up with a handful of sand then you get a free pair of goggles. Tom had a go. If the seabed was about 10 feet below he may have just about made it. His only words were something along the lines of “It’s a bloody long way down!” 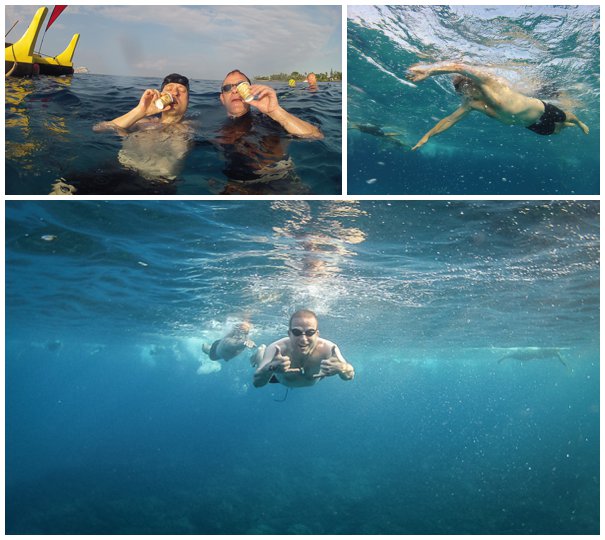 At about 8am I bumped into Paul Deen who was at the boat. He and I were both there for the same reason. We’d previously seen a tweet about a special offer. The 2012 Ironman World Champions (Pete Jacobs and Leanda Cave) would be on the boat at 8am giving out special swimcaps. These then allow you to get a pair of blueseventy swim trunks for a charity donation of five dollars.

Next thing we saw Pete and Leanda standing up on the boat along with a chap from blueseventy with a handful of caps. They asked if everyone knew why they were there. The folk in the water seemed to know. Dammit. The rules were explained and then it was like a free-for-all! It was pretty manic and 50 swimcaps don’t take long to fling into the water.

Paul and I got lucky and next thing we were swimming back to shore with our new swimcaps.

On arrival at the beach I bumped into my friend Dave - the local chap I met a few times whilst cycling and swimming in my first couple of weeks here. We had a chat and I had to get a photo of him. He volunteers on one of the aid stations on the run on Saturday. Good chap.

Over the road for our usual cup of post swim coffee (I don’t think we’re addicted - it just is very very nice).

Paul, Sharon and I then strolled down to the expo to get our new trunks. Paul somehow managed to get the last pair of 32-inch waist trunks. Following a discussion with the chap in the booth I walked out with a pair of 30 inch trunks! Oh dear oh dear.

I would post a photo of me and my new purchase but I think the readers could do with a day of respite as I fear tomorrows blog will be on overload as Thursday of race week is a very very important day! Stay tuned…. 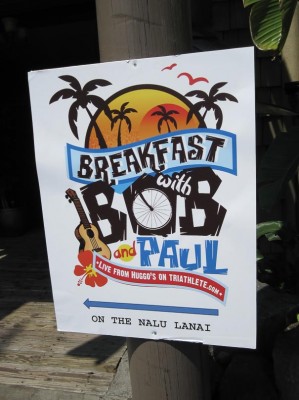 Whilst walking back to the jeep we thought we’d see if we could spy on the recording of the ‘Breakfast with Bob and Paul’ interview show that is broadcast live on triathlete.com each morning of race week. They’re interviewing the greats of triathlon and I thought we might be lucky to see what was going on from a distance.

We saw a sign…. we followed it. Next thing some chap asks me if my name is Sebastian. Meaning Sebastian Kienle - a german triathlete who won the 70.3 (half Ironman) World Championship in 2012 and 2013 and is at Kona with great expectations on his shoulders. I explained that unfortunately I was not a world champion. Dirk (Bockel) then walked past as he was the previous interviewee - stopped and said hello as he’d recognised me from when I had a photo with him a few days ago. Love it.

It’s funny - if something isn’t happening at the expo or down by the pier in the mornings then people just don’t seem to want to get involved. Fools… the lot of them.

Before I sat down I just had to have the one photo… with PonchoMan. He’s one of the real stars of Breakfast with Bob. He plays the uke and does a lovely musical intro and outro to each guest. He was lovely. 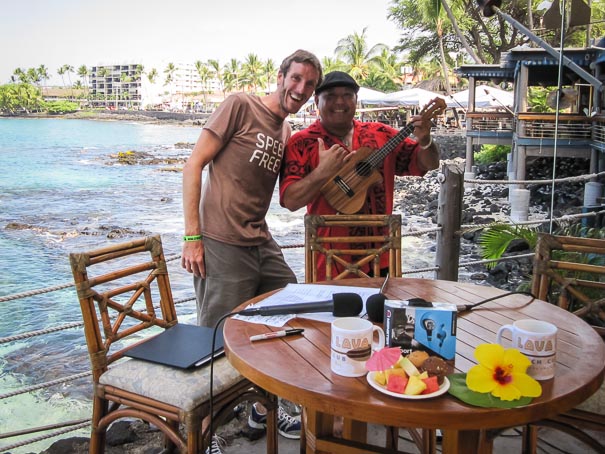 Anyway… we sat down, waited for the real Sebastian Kienle to arrive and watched the 15-20 minute interview. It was really interesting. This and all the other interviews this week are available at triathlete.com to watch. 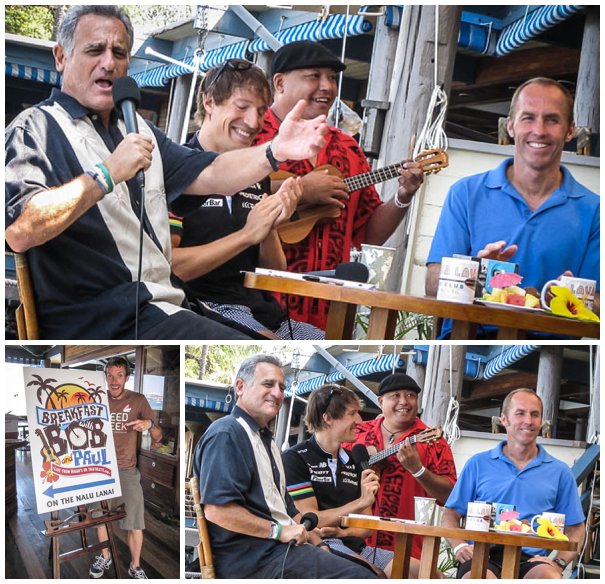 After this excitement we needed to calm down so it was home for another later breakfast (11am!) - not before a quick photo opportunity… 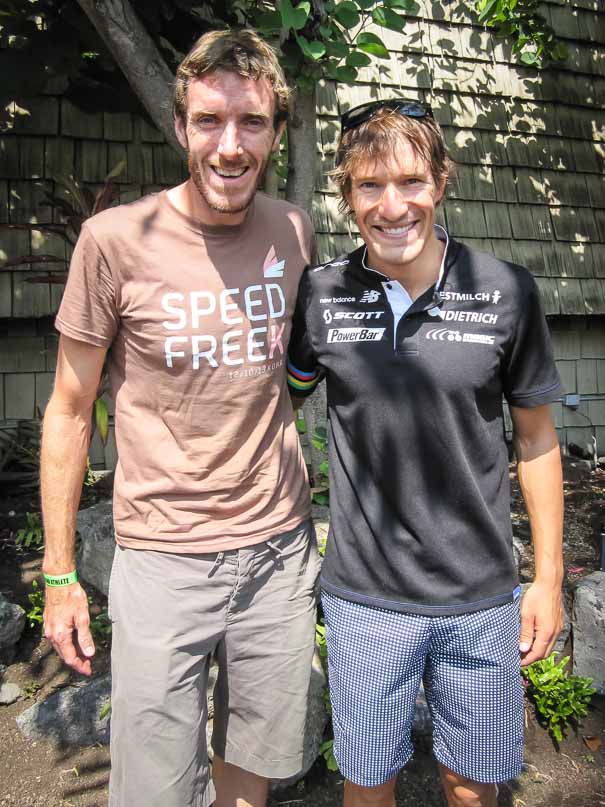 A little later I headed down to the Cervelo stand at the expo and dropped my bike off for a free check-up. My bike is made by Cervelo and this is a service they offer to all athletes riding their bikes. Sharon then collected me in the jeep as we had another appointment to get to! Oh, whilst waiting for Sharon I bumped into Gina Crawford (from New Zealand) and picked up a new cycle jersey… as you do! 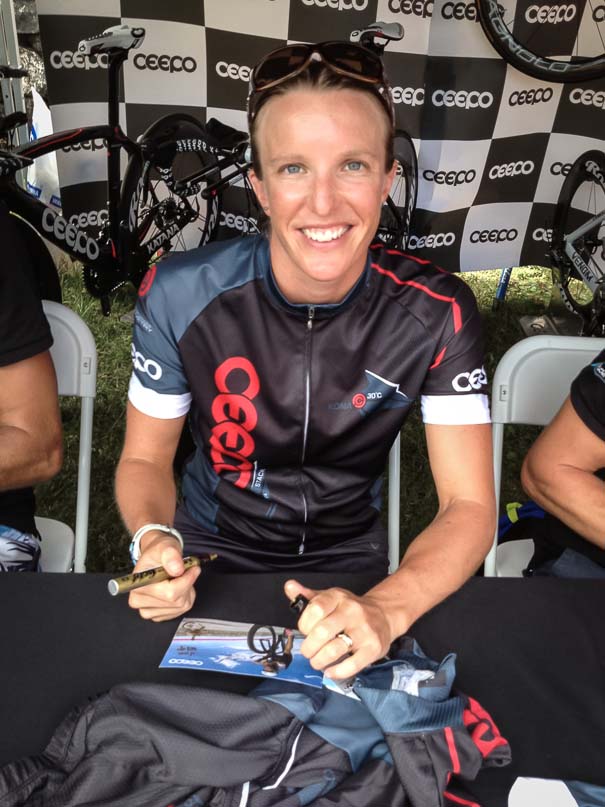 Shortly after heading out to Hawaii triathlon clothing brand Fusion Sports announced a special deal for UK qualified athletes. You could buy some of their kit (really cheap) to take to Kona. All they wanted in return was a few photos of you racing or wearing the gear. Seeing as though we got a good deal it was only fair to get some photos. Sharon was in charge of the shoot and I arranged to meet up with Paul half way down Ali’i Drive at a location I’d scouted out a few days ago.

We had a bit of a giggle and got some great photos. I’m sure the chaps at Fusion will be pleased. It was the least we could do. 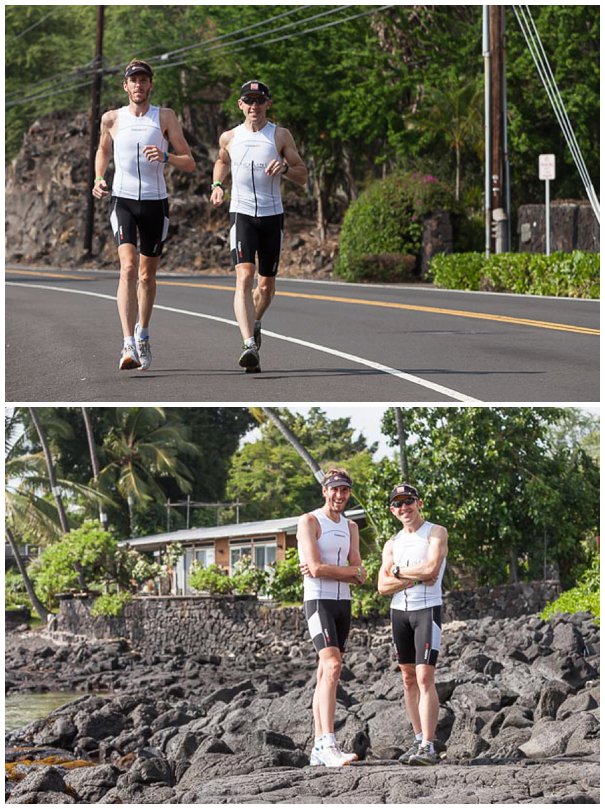 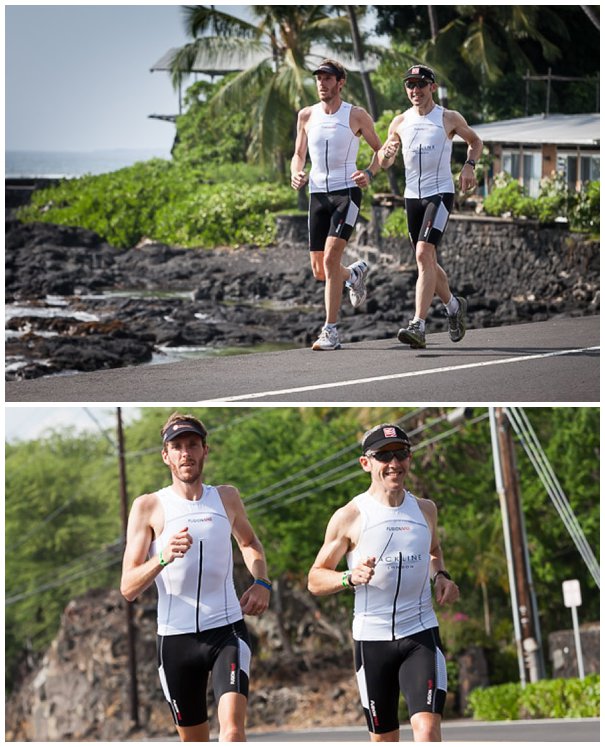 Next thing Sharon was tapping her watch…. we had to get up the road to our next ‘appointment.’ It was 3pm and former Ironman Champion Chris ‘Macca’ McCormack announced that he’d be doing a signing and giving away limited edition t-shirts. Oh… if you insist!

The three of us headed over there (it was about a mile away if that) and met the man. Chris McCormack is a great character for the sport. He knows his stuff and isn’t afraid to tell people what he thinks. Unfortunately he isn’t racing this year due to illness but it was lovely to see him on the big island and of course get a photo! 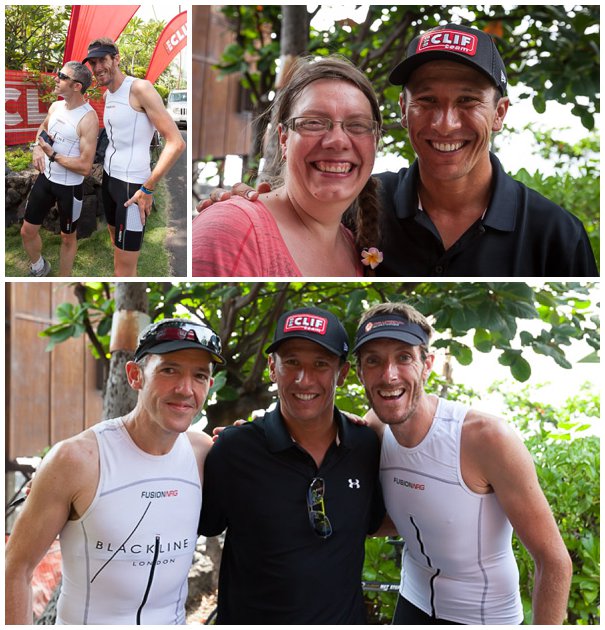 I then ran down to the expo to collect my bike and when I got home there was time for a super quick shower before heading out of the door again! Sharon and I strolled down the road as I wanted to go to the ‘Slowtwitch Gathering.’ Slowtwitch is a hugely popular American website/forum and I’ve used the forum plenty of times and they have some great content on the rest of the website. Each year they put on a gathering (which I’d signed up for weeks ago) at a super posh oceanfront home and we headed down there, saw a few people we knew, listened to the live music, had some free Longboard lager and enjoyed the sunset. The place was super busy and to finish the evening they put on a fantastic raffle. There were some very very good prizes including racing wheels and also a Boardman bicycle. They even had the man, Chris Boardman there to announce the winner. 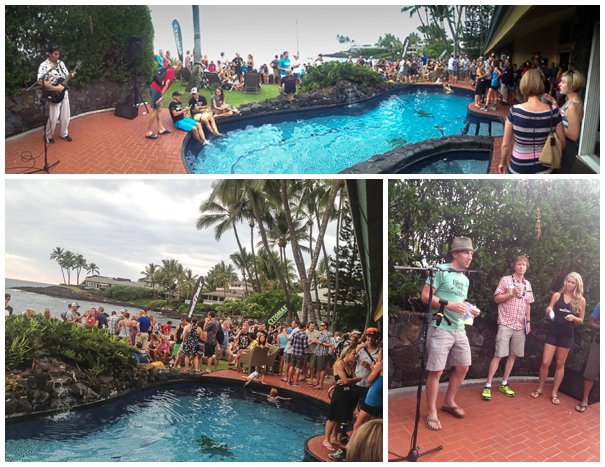 I usually bring bad luck to raffles and unfortunately tonight was no exception.

We then walked back home, had dinner and I sat down to write my daily update. Which is where I am now, and I have nothing further to add. Goodnight.

PS. There’s been no shark sightings for a few days but this was the front page of the West Hawaii Today newspaper today (Wednesday)… 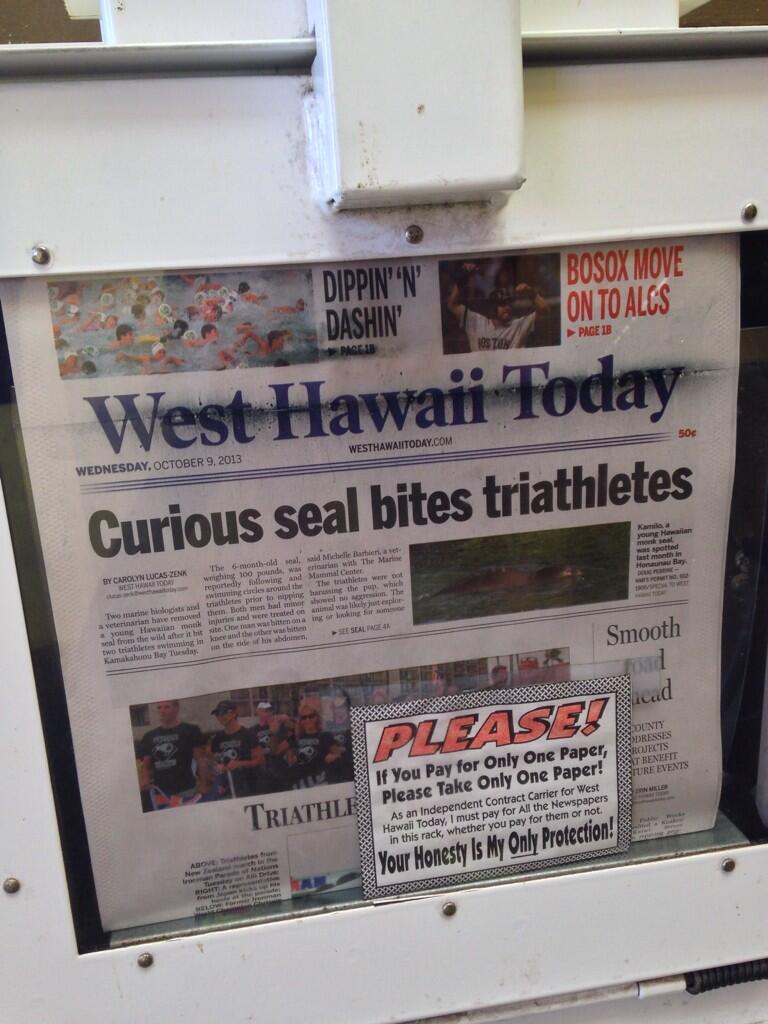