The Ironman World Championship on Saturday is a very important event. 8am Thursday morning in Kona is a sporting event that holds almost as much stature - The Underpants Run. I’ve heard about it, I’ve read about it, I’ve seen pictures of it, now I’m in Kona I have to do it surely! This is an abridged description of the event from the underpantsrun.org website…

IF IT’S THURSDAY IN KONA, IT’S THE UNDERPANTS RUN!

The run conceived of in 1998 by Chris Danahy, Tim Morris, and Paul Huddle as a protest against wearing Speedos in inappropriate places (stores, restaurants, etc.) has morphed into an Ironman pre-event ice breaker and local fund raiser that has become an integral part of the Ironman World Championship event week.

Before I get started with the ‘meat’ of this diary entry, if you’re reading this at work I’d suggest you don’t - as there’s a bit of bare flesh in the photos below. Worse of all is the fact that much of it is mine!!! OK, now the disclaimer is out of the way lets continue…

Now… I’ve got my funky trunks which would be ideal attire for this event but people have been giving me a little bit of stick for looking so good in them! I’ve worn them as advised and read the safety instructions very clearly: 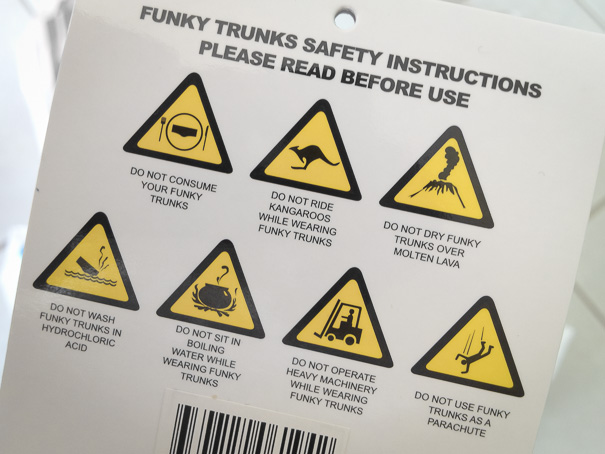 After Wednesdays visit to the coffee boat where I picked up a pair of rather small blueseventy trunks this entitled me to enter a competition to win 1000 dollars of blueseventy gear. All I had to do was wear my new trunks at the underpants run and meet up with the guys after the run and enter a little raffle.

So… squeezed into my new trunks I was down at the pier at about 6:45am looking the part. As you do. Well… as I seem to do! 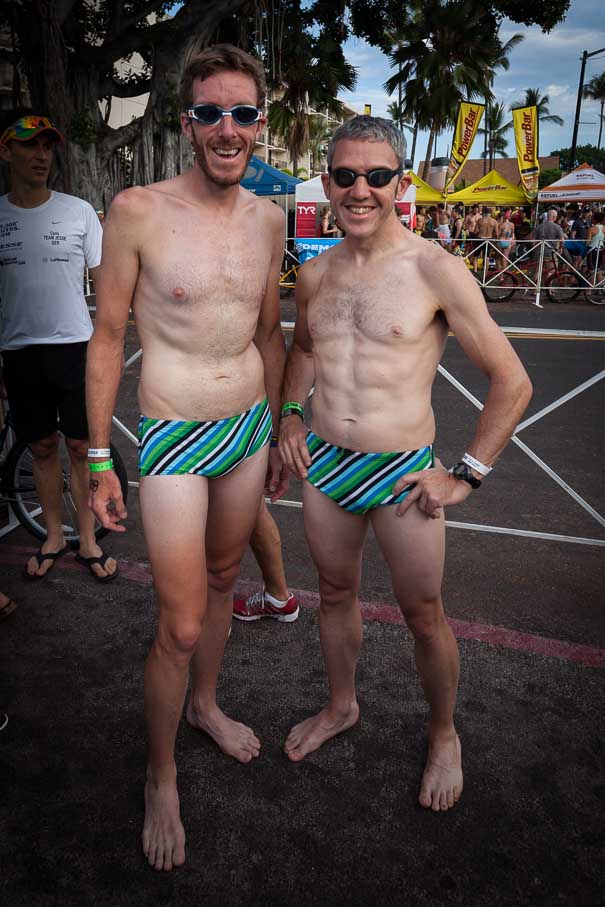 I met up with Paul (I swear he’s following me at the moment) and we went for a swim. The coffee boat was too far away (says the man who’s got to swim 2.4 miles on Saturday) so we went for the big inflatable banana that’s been anchored off shore for a couple of days.

We swum out, we swum in, we showered and I got changed for the underpants run. This involved putting my pirate visor on and a pair of running shoes! Paul had a post swim recovery shake and Sharon caught a photo of him in deep concentration. 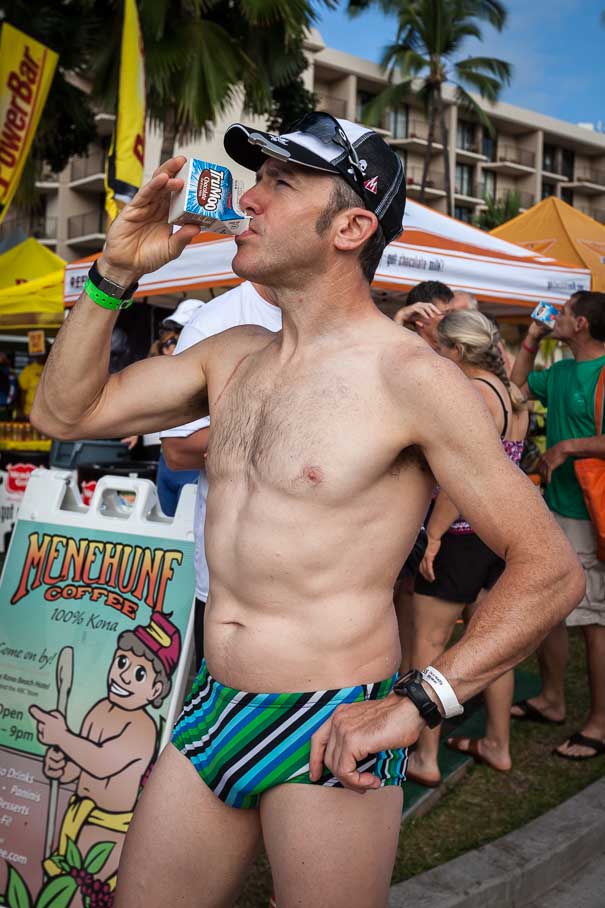 It was about 8am at this point so we headed quickly to the start, just down the road from the pier. We joined the mob of people - there were hundreds and hundreds of them and cheered at the supporters lining the sides of the roads. If its half as busy as this when I finish the race on Saturday it’ll be amazing. It was like when I ran the London Marathon earlier this year. Crazy. 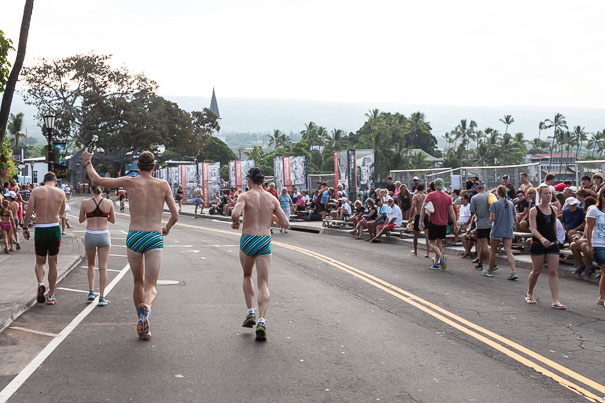 Obviously I took my GoPro with me so I could get some photos and video of the spectacle. Oh and it was quite some spectacle. 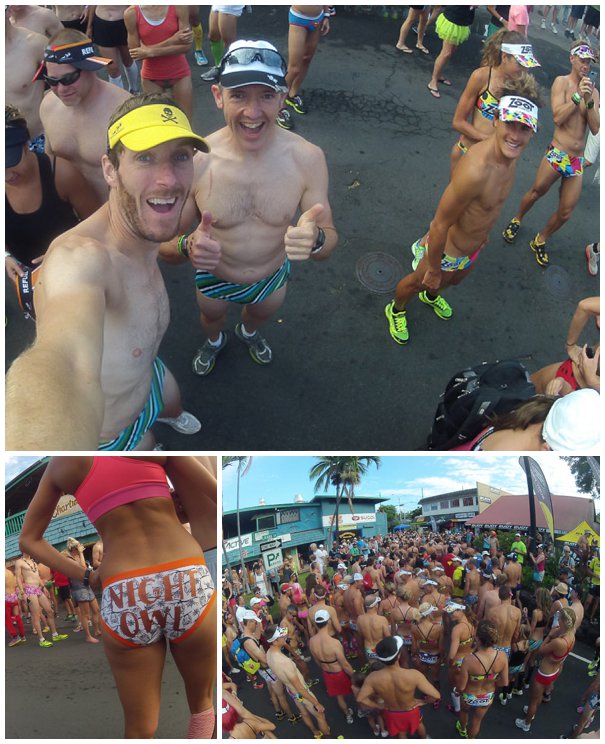 I cannot think of any decent excuse for someone not to come and watch (there’s all the ‘bleacher’ seats by the Ironman finish set up if you want a seat) or to take part in the event. It’s free, you just turn up, look like an idiot (which is optional but kind of comes naturally to me) and jog/walk the course. If you ever get the opportunity to come to Kona during Ironman week you need to come along and take part or just watch. You’ll love it. It’s been a true highlight of my three weeks here so far.

Thankfully the course is broken into two segments - with the first part being a run to the pier. According to the official route map it says “Short stop at the Pier for Calisthenics.” I had no idea what this means but Wikipedia explains all:

Calisthenics are a form of exercise consisting of a variety of exercises, often rhythmical, movements, generally without using equipment or apparatus. They are intended to increase body strength and flexibility with movements such as bending, jumping, swinging, twisting or kicking, using only one’s body weight for resistance. They are usually conducted in concert with stretches. Calisthenics when performed vigorously and with variety can benefit both muscular and cardiovascular fitness, in addition to improving psychomotor skills such as balance, agility and coordination.

Right, I see. When I got to the pier I suddenly found myself very near the front - this was ideal as I would then be able to hear the all important instructions from Paul Huddle. Yes, the one and only ‘Huddle’ - husband of eight time Hawaii winner Paula Newby-Fraser. He’s often known as the sidekick to Bob Babbitt but he’s a fine chap all by himself. He was easily spotted as he had a loud-hailer and had the Ironman M-Dot logo shaved into his chest!

Anyway, whilst at the pier we had to do a number of ‘feats of strength’ including star jumps, squats and muscle flexing - after each interval we were requested to check our heart rates.

“Stop…. Check your heart rate…. Yes, much too high…. Take some rest”

After some essential recovery time we continued the run. This time down Ali’i Drive to ‘Uncle Billys’ hotel where we run through the parking area and then back onto Ali’i Drive back to the start finish. 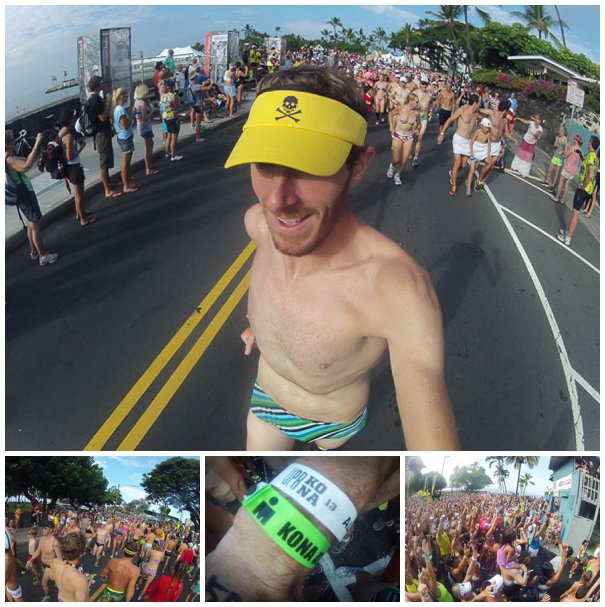 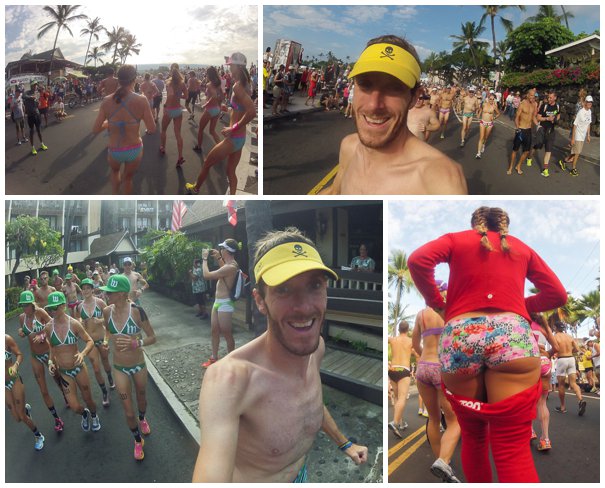 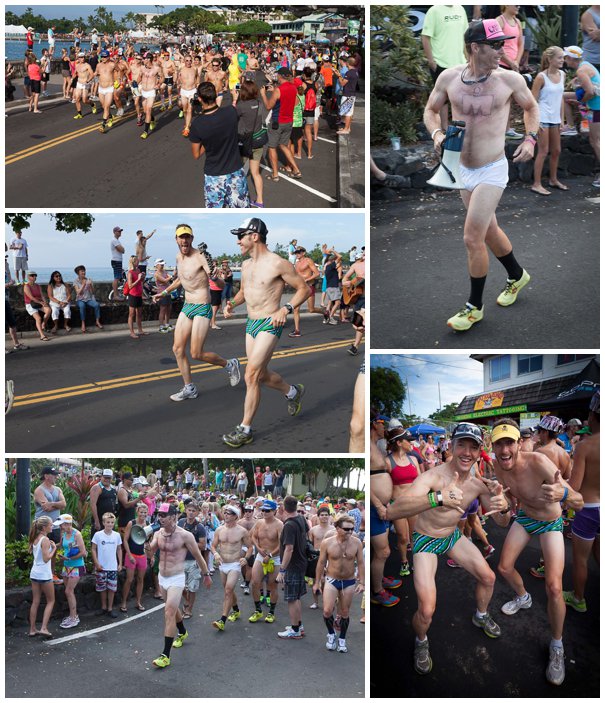 The run finished back where we started and everyone got together for a semi-organised group photo. As I was fully warmed up I flexed my muscles a little more and I think that myself and Paul in our new trunks carried off the look pretty well. 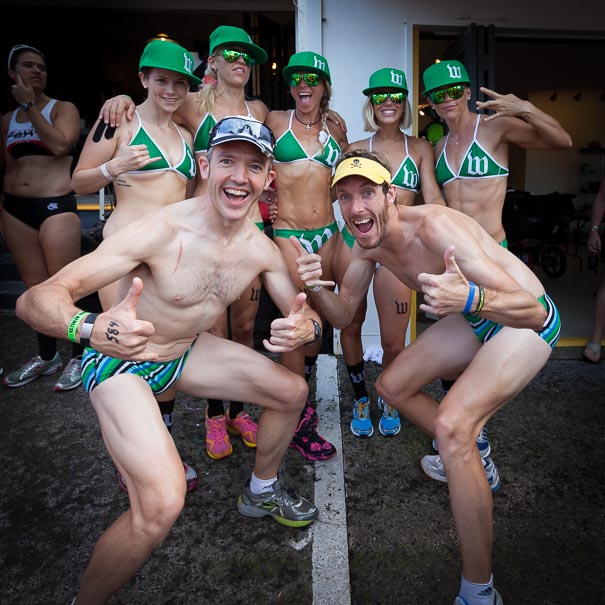 Just as a quick aside here, later on Thursday evening I was chatting with Paul and he said to me… “David - I’m 42 and you’re 40 years old - and we’ve still got it!” Yes Paul, we’ve got it. Well, we’ve got something, that’s for sure!

I found the blueseventy people to get myself ‘registered’ for the 1000 dollar raffle. The one that I paraded around town in my size 30 trunks for! I registered along with about 30 other people. The winning ticket was drawn…. 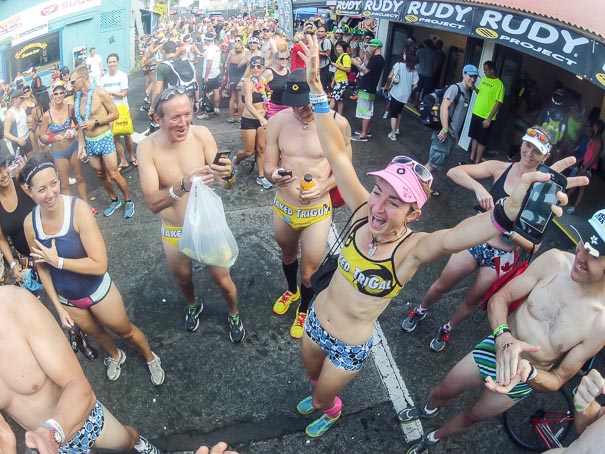 …and it was someone else! Doh. I still celebrated though - so much that I ended up in a photo of the winner that found its way onto twitter. 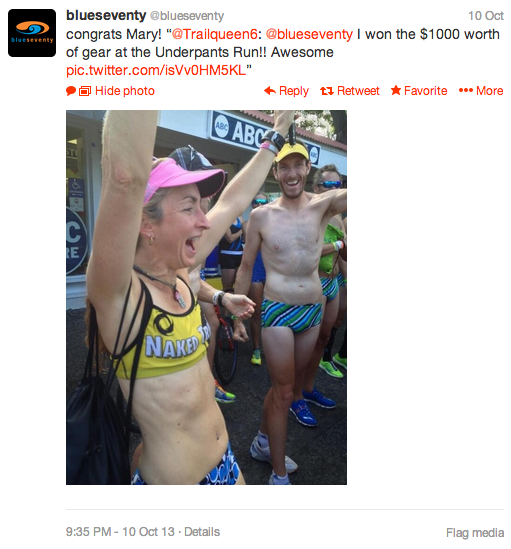 After all of this excitement I needed a rest. A little cuppa, another couple of purchases from the Ironman shop (good job we’ve got some room in the bags for when we come home) and then home for lunch.

But first on the way back I had to do something…. I wrote about Greg Welch’s 1994 finish a few days ago. I just love it. Actually, before I continue please take a moment to look at this YouTube video of his 1994 finish.

The enthusiasm is just amazing. I so so love it. Meeting him the other day was ace.

So… as we were walking back from the Ironman shop it was time I showed the world how hard I’ve been working on his finish line celebration over recent weeks. There’s huge ‘signs’ along the final part of Ali’i Drive showing finishing photos from many years of the Ironman World Championship. I found the one of Greg, then proceeded to leap up and down in front of it like a mad-man. 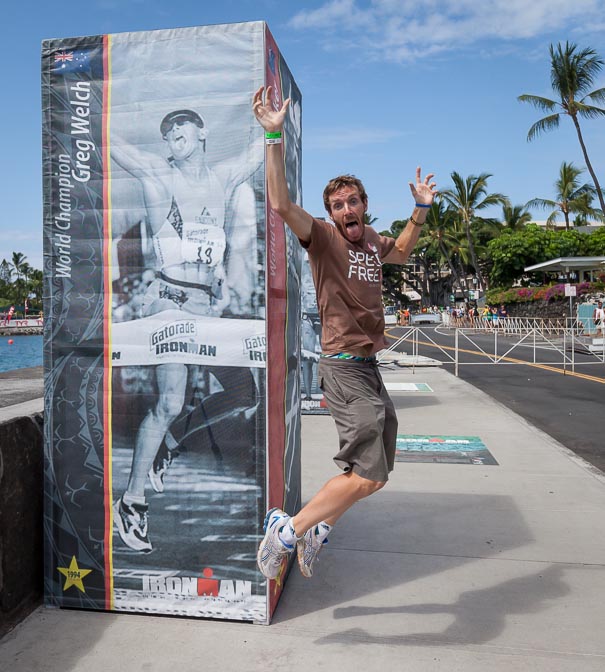 Next thing I’m being laughed at from a restaurant over the street. It was some of the Team Freespeed chaps wondering what on earth I was doing. Well chaps, this is what I was doing!

This afternoon consisted of making sure my bike was in tip top condition, oiling the chain, ensuring the bolts are all nice and tight and giving it a little test ride where I headed down to the Gu Energy house a couple of miles away to pick up another mighty fine free t-shirt. If you’re wondering what makes a ‘mighty fine t-shirt’, pretty much as long as it says ‘Kona 2013’ on it then it passes the test. 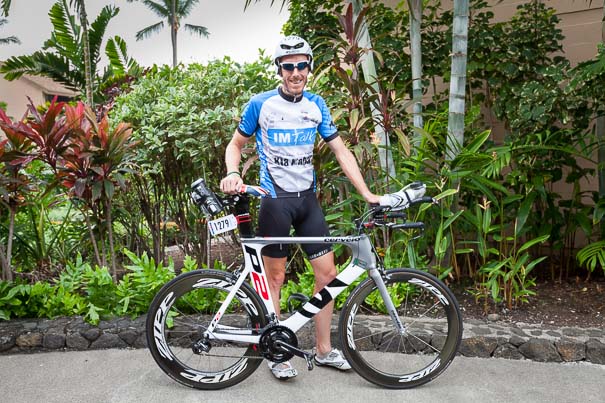 I also got lots of messages from people who’d seen photos of me from this morning in the galleries of triathlon websites including Slowtwitch and triathlete.com! Oh dear. Here’s one I love from the muscle-flexing segment on the pier from Slowtwitch! Please see the rest of their photos on their fine website. 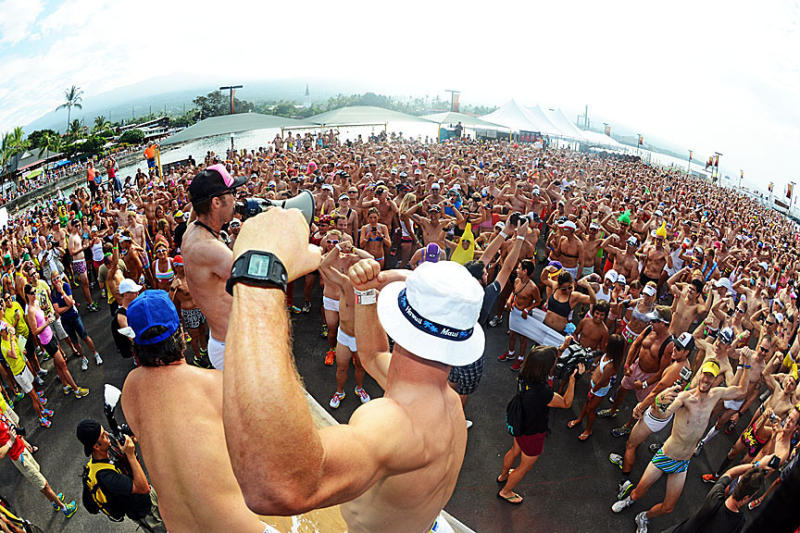 I am at the bottom right of this photo recording some video of myself on my GoPro!

On the way back home I popped into the local florists (the one where I bought Sharon’s lei from) and said hello. They still had a note of my name and race number resting on the till and the Michael showed me his little Ironman ‘shrine’ that he set up in store. I said in my earlier blog about them that they do flowers for previous multiple Ironman winner Mark Allen and today was no exception as he said he’d just done a selection of flowers for him. Nice. 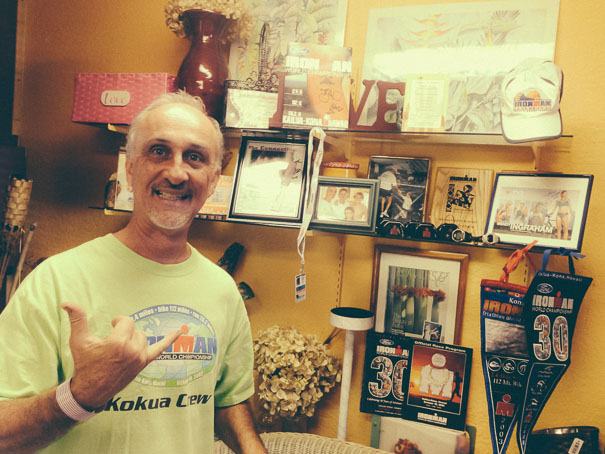 I said I’d see them on the run course (as they support right by their shop) and they said they’d look out for me. Awesome.

Back home for a shower and then back into town for the pre-race ‘banquet and race briefing.’

It was huge! I’ve been to a few Ironman ‘pasta party’ type events before but this was on a different scale. It was more like going to a pop music concert at Wembley Stadium in London or something! Crazily big. I saw a couple of people I’d met since arriving here which was nice and then managed to hook up with Liz Pinches from our local triathlon club whom we sat with for dinner. 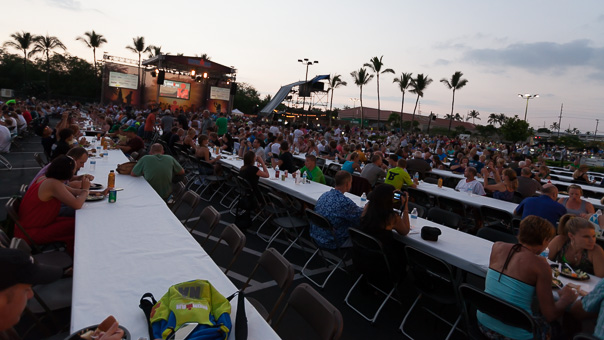 The evening had some fancy traditional dancers up on the stage, speeches from the race director, the CEO of Ironman, the ‘voice of Ironman’ (look that one up if you don’t know what I’m talking about) and Bob Babbitt (of course). We saw last years age group winners and also the youngest and oldest competitors on Saturday. The youngest is 18 and the oldest is a Japanese man who is 81 years old. They also introduced Ken Glah up on stage, racing his 30th (yes, 30th) Ironman World Championship on Saturday. Superb.

The event did seem to go on a bit partly as we were all waiting for the race briefing which was at the end. The briefing started at about 8:15 and was finished less than half an hour later. The information given was good, but nothing that couldn’t have been put in the athlete information guide. This late (yes, getting home after 9:30pm is very late for us here) meant I was delayed in getting this daily update done. So much so that I’m finishing it off on Friday.

Finally, as we were walking back to the car after the ceremony we could see the finishing line area all being set up on Ali’i Drive. It’s really getting real now. I’ve wondered how what you see on TV and in the photos fits in the space available and now it’s starting to make sense. 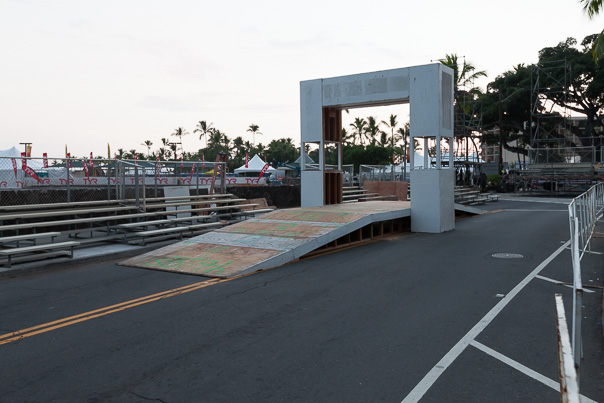 It looks just a bit different to how things will be on Saturday evening when I plan to run up and over it. It’s getting close.