I know you all want to read my race report from Saturday’s Ironman World Championship. (yes, the World Championship) but I’m afraid you’re going to have to wait a few more days for it. I’ve got three long airplane flights in a few days time so I’ll be working on it during the flights. You got a brief posting for Saturday anyway with a photo so that will have to do for right now.

The thing is, I’ve now got Sunday to tell you about…

As Saturday rolled into Sunday I was stood at the finish line party at the race cheering in the final finishers. Well, I cheered in finishers for about the last three hours or so of the race. I’ve got some great photos of some of the final finishers of which some will no doubt go into the race day blog. 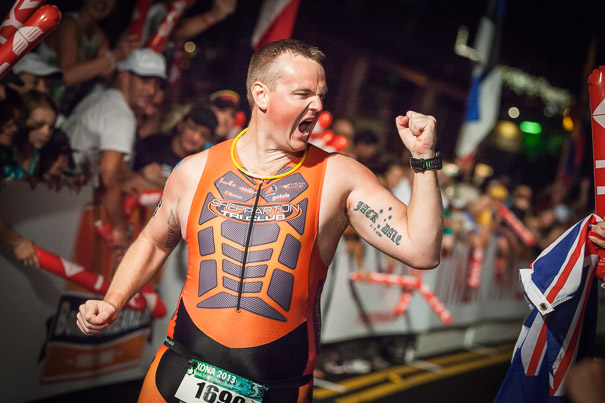 We got back to our condo shortly after 1am. Seeing as though I was up before 3am on Saturday morning and had quite an energetic day I was a little worn out! Whilst trying to calm down from the euphoria of the best race finish line party in the world (yes, it is, that’s a fact) I saw the following message on Twitter… 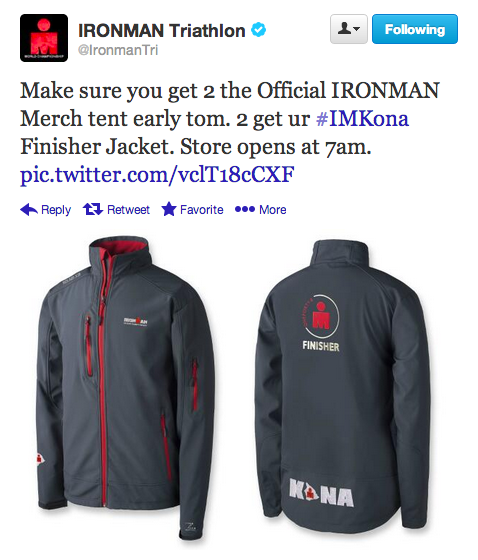 Dammit, they say if you see something in the Ironman shop you should just buy it there and then as if it sells out then it may not come back on sale. So… we needed to be at the merchandise tent/shop in a few hours time. The lie-in will have to wait for another day.

Up early again (yes, I’ve been here nearly 25 days and not once been up after 6am) and then we were out of the door at about 7am. As we drove up Ali’i Drive towards town there were fewer people out running as had been over previous days and weeks. I wonder why!

We parked up and strolled over to the merchandise tent. It was about 7:15am and there was a queue out of the door with about 30 people in front of us. This is crazy. I don’t think I’ve ever queued to get into a shop before. I just don’t really ‘do’ shopping. Anyway, another 200 dollars later and we walked out with another carrier bag of ‘stuff’ that I didn’t really need! It’s just like the things I bought a few days ago but this time they say the word ‘finisher’ on them as well. Damn you Ironman and your marketing!

The finish line area was being dismantled really really quickly - so much so that by later in the day it was completely gone and cars were driving up and down Ali’i Drive by the pier as if nothing had been there 18 hours beforehand.

I did like the huge pile of bike ‘track pumps’ all stacked up in a huge messy pile - being packed away for another year. These bike pumps were available in the transition area before the race started on Saturday.

As Tom from parkrun was here supporting we decided to have a 9am gathering by the pier. There was a good little group of us - some in running gear. They went for a run. I did not. 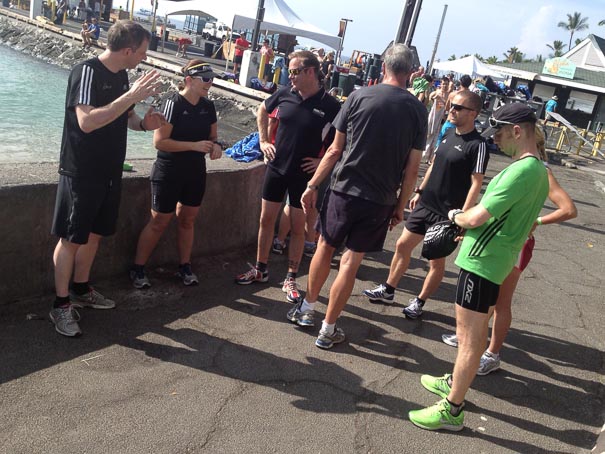 I’d read that ‘Breakfast with Bob’ was doing a ‘Championship Edition’ special broadcast this morning so suggested that some of us walk up to Huggos, and the keen ones go for a run and meet us there. Huggos was bound to be busy as the World Champions were being interviewed.

Well… we got to Huggos, strolled on in, I asked the chap (the one who thought I was Sebastian a few days ago!) if we could be part of the studio audience and he said sure thing. In fact, there were five or six of us sat there and we were the studio audience. A handful of people were on the grass area just a few feet behind the camera but apart from that nobody else was there to see the newly crowned Ironman World Champions. Unbelievable.

The access you have to people in this sport is incredible. OK, so the money isn’t quite like Tennis, Golf or Formula 1 but for people who love the sport of Ironman, read the magazines, watch the videos, go to races then this place is stunning. You can go to the expo stands for an autograph session or whatever and pick up some freebies but with a little bit of effort (i.e., walking a quarter of a mile from the expo) you can sit down 10 feet away from the world champions and listen to them being interviewed.

We watched an interview with first US finisher Tim O’Donnell and then next up with Mirinda Carfrae - the womens champion (and his fiancee). I was so pleased to see that Rinny had won (ok, I would have been really pleased too if Rachael Joyce had won as well) and it was lovely to watch and listen to the interviews. She was so happy (unsurprisingly) and not in any sort of a rush to race off after the interview. I turned round during the interview and saw my good buddy Paul sat there. He’s like a bloody limpet I tell you! 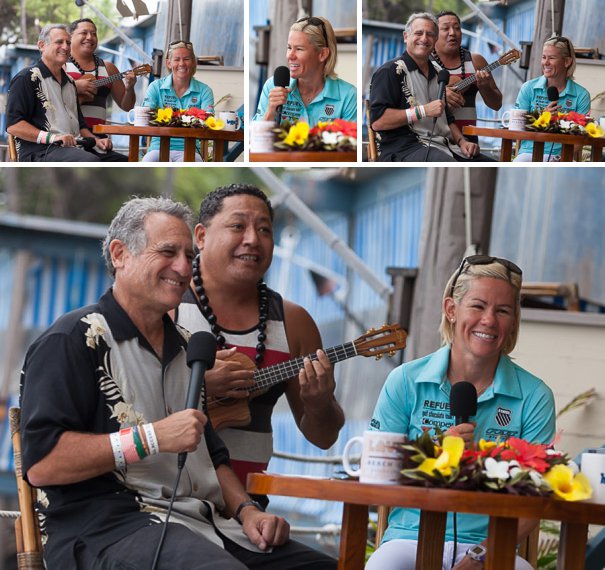 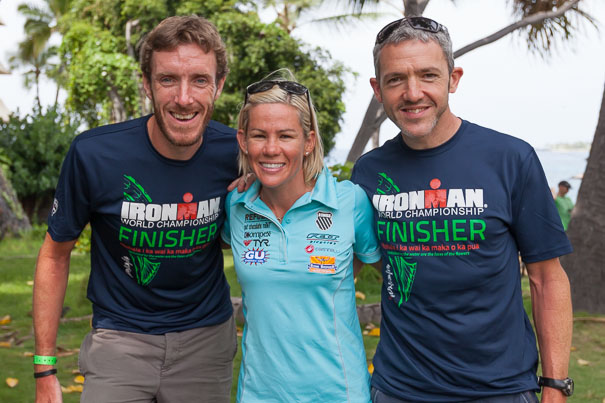 We had a few photos, then welcomed the male world Champion Frederik van Lierde in for his interview with Bob Babbitt. In previous years I know a fair bit about how the pro race unfolded during the day from watching online at home but this year I didn’t know much about what was going on. Oh, that’s right - because I was in the same bloody race! 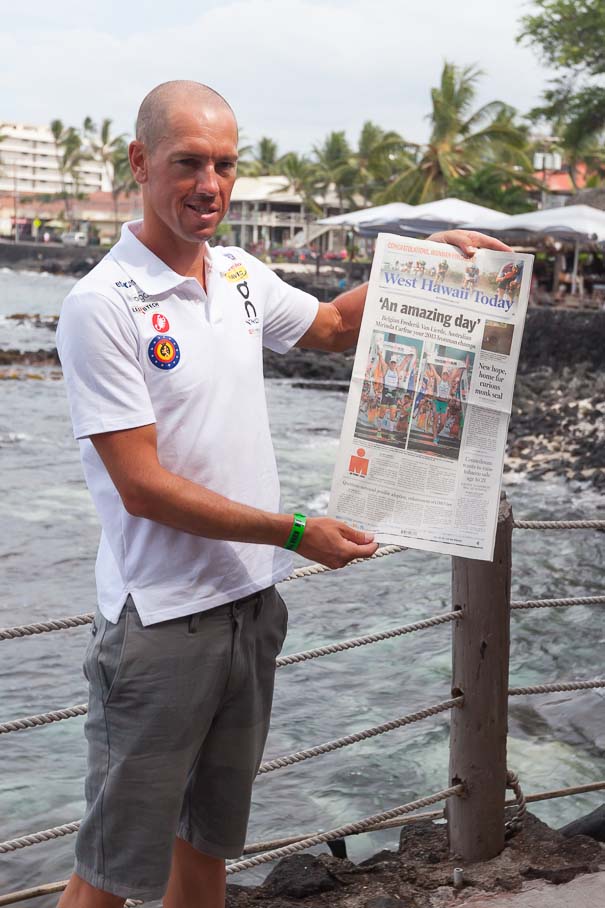 It would be rude to not get a photo wouldn’t it? The pro’s are so accommodating. There isn’t a queue of ‘groupies’ desperate for photos (well, as long as you don’t include Paul and myself that is) and they’re so so damn friendly. 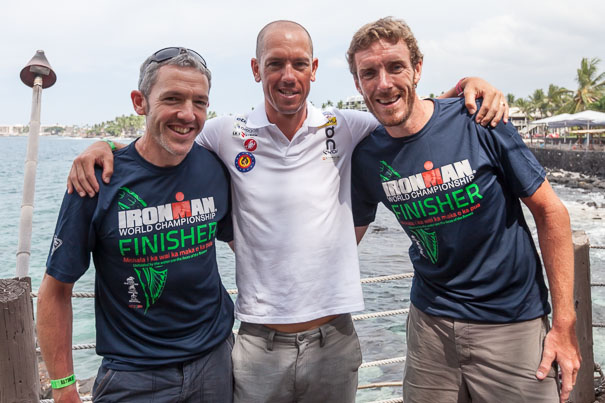 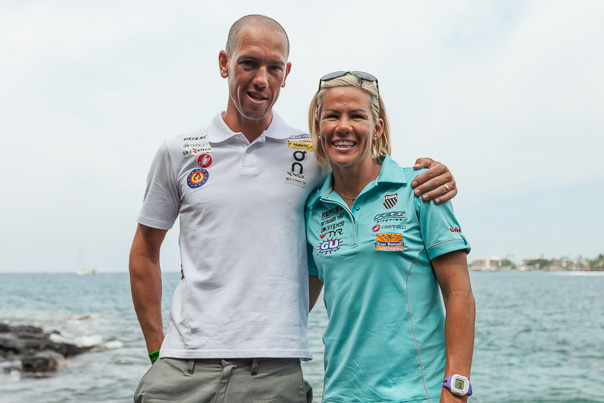 We then headed back to our place and Paul came along to collect his bike and kit that he’d left at our condo on Saturday evening. Whilst sorting out his kit bag we detected what can only be described as the stench of a dead skunk in there somewhere. Upon further investigation said skunk turned out to be Pauls running shoes. With a clasp like a nuclear scientist carrying toxic material he carefully took the shoes to the rubbish bin outside. Thank goodness for that!

Sharon and I then took a dip in the hotel pool and got chatting to a few other people who were also relaxing in the pool and trying to cool sunburnt arms and relax tired muscles. We’ve met some lovely people this trip - well actually pretty much everyone has been lovely.

Oh, and seeing as though I was going for a dip in the pool I thought I’d get a photo of my sunburn (mostly around my shoulders) and for the ladies out there, just one more photo of me in my Funky Trunks!!!! 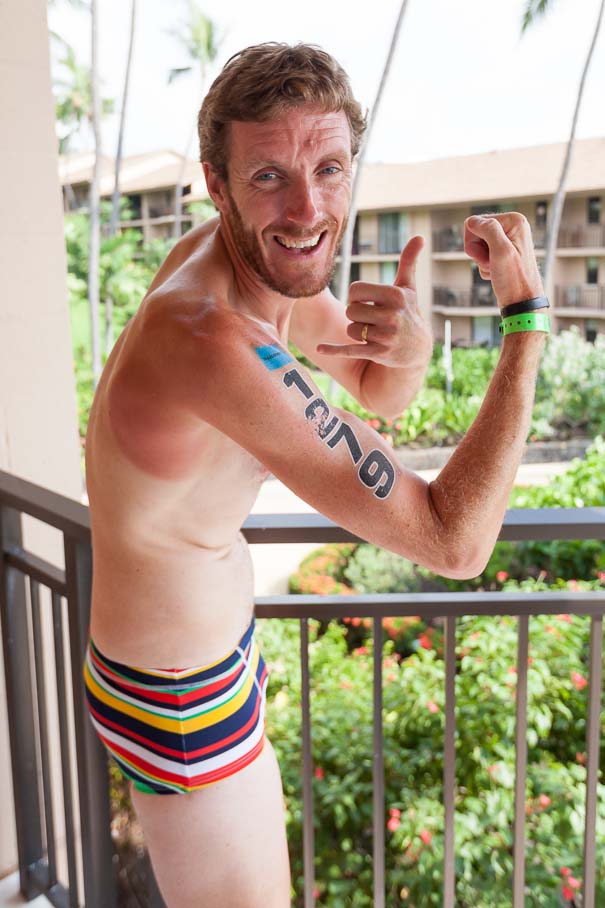 Back for a shower and then we headed into town for the Banquet of Champions. Just prior to that I met up with Tom Williams as he wanted to interview myself and another couple of Brits who raced on Saturday to ask about our race. The plan is that the interview with us will be featured on the hugely popular Marathon Talk podcast as their interview this week.

We then headed into the banquet and feasted on Kona Brewing Company lager and a little food. The event was pretty good. There was a good bunch of us on the same table and plenty to joke about and celebrate. Of course I was very serious and I don’t joke about anything you know!

We heard about the slowest transition times in the race (how’s 80 minutes in the bike-to-run transition sound?) and celebrated the first ever female hand-cycle competitor finishing the race.

One lady, Harriet Anderson, went up on stage. She’s 77 years old. She finished the Ironman World Championship in a time of 16 hours 56 minutes and 51 minutes. She’s amazing. When being interviewed she said that she’d crashed on the bike at about 95 miles and went over the handlebars. One of her aero bars (the things that stick out of the front of the handlebars which you rest your arms on to make you more aerodynamic) was broken for the last few miles of the bike but she just got on with it. Just a few bruises. 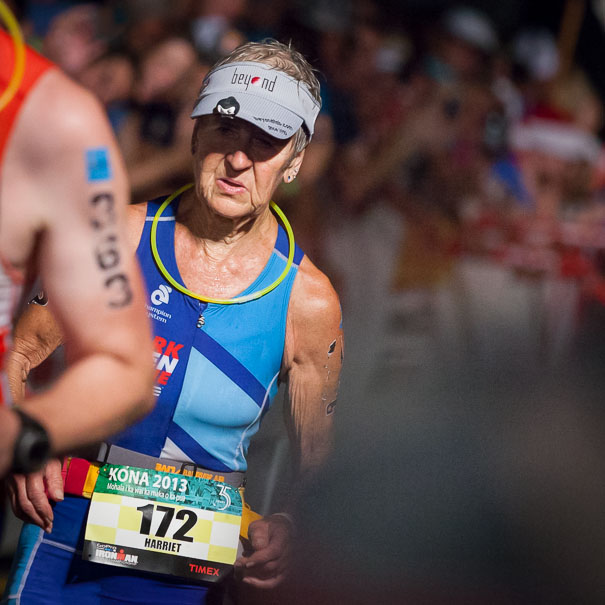 We saw video clips from the race (which were fantastic), celebrated the top 5 males and females in each age group and then the top 10 professional racers. It was great.

Mirinda gave a pretty long but very touching speech and spoke about Harriet being an inspiration. Frederik gave a slightly shorter speech but as he’s my Breakfast with Bob buddy from this morning I know all about the race he had anyway so it didn’t need repeating.

My left foot was really starting to hurt during the evening. Not on the top but underneath. I’ve got a couple of lovely blisters on my foot and it just seemed to hurt more and more as the evening went on.

Anyway, it was a fine evening and we left the banquet to a huge downpour of rain.