We watched our final Kona sunrise this morning from a very familiar spot. As per usual we saw a few fishing boats and canoes out on the ocean and the waves as usual crashing onto the rocks where the water meets the lava at the edge of our condo block. It really is a beautiful place. I don’t think I’ve posted a photo of our morning view on the blog yet so before I forget, this is what we would sit and enjoy every morning.

One thing that we wanted to do before leaving was get a nice few photos of me and my finishers medal. So as the sun was rising we headed onto the lava rock area and Sharon snapped away for a few minutes. 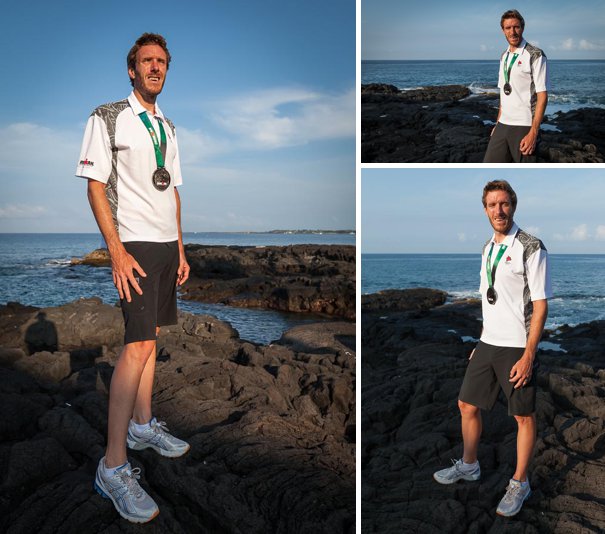 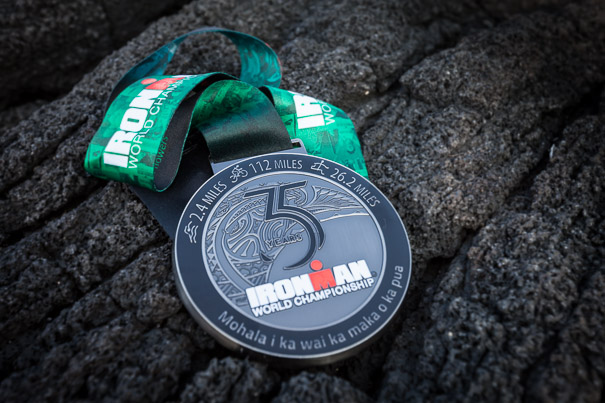 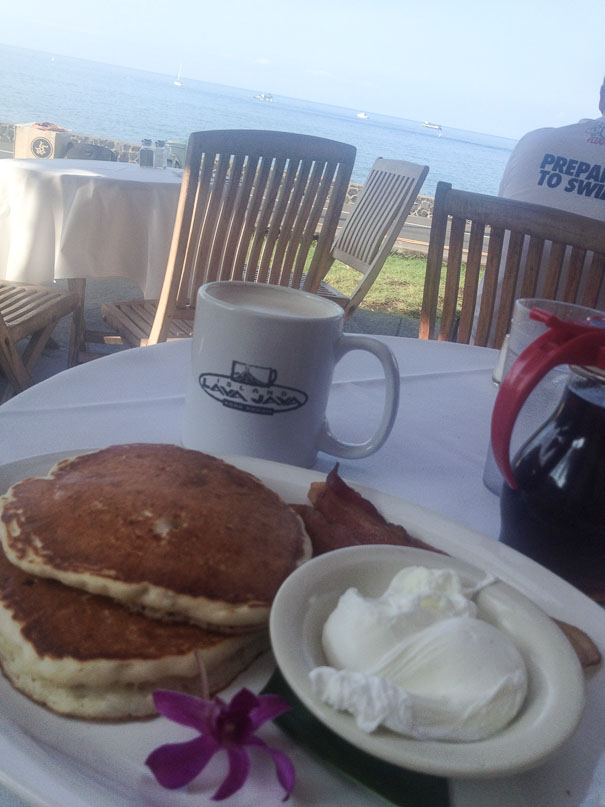 We’ve had a couple of breakfasts at Island Lava Java and thought we’d return to old faithful as we’ve had some lovely food there and the view is lovely.

It’s was really quiet this morning and at about 8:30am we could just stroll up to an empty table out front and sit down. There were a fair few swimmers out in the water (Lava Java looks directly out to the 750m and 1.2 mile permanent turn buoys - measured from the pier) and I suspect they were hanging around more than usual because of the pod of dolphins that was near them. We could see the dark coloured fins moving up and down on and off for quite a while whilst we were eating. It was lovely. This place is seriously chilled out now that the Ironman circus has pretty much completely left town.

We got back to the condo and whilst Sharon made sure all the drawers and cupboards were empty, I decided to try and count the fish in the ocean by going for a swim directly from the lava rock outcrop from the condo block boundary. One of the chaps who lives here told me that it was great snorkelling but you need to do it in calm seas as the waves crash onto the rocks and there’s no gentle step into the water. You just (gently) clamber down and drop yourself into the water. It was much easier than I thought and there was some great sealife to be seen. Yellow Tang fish seem to the most popular of all fish that we’ve seen whilst snorkelling. I swum around for about 10 minutes and then headed back, put my trunks out to dry (there’s not much fabric to them so shouldn’t take long!) and then showered and then got the jeep packed up.

Whilst packing we thought it would be a good idea to take a photo of the ‘stash’ of goodies that I got during the whole Ironman event. Ranging from swim caps, visors, goggles, t-shirts, cycling jerseys, cycle tops, rucksacks, jackets, a towel to a very very special finishers medal and oh, and swim trunks. Some of these were freebies we picked up along the way and some were *not* freebies from the Ironman store. Most of the time that we’ve been here we’ve said that we may never come back so just buy stuff if we want it as you may never have the opportunity to do it again. Lets just say that if I do come back I will hopefully spend less in the Ironman merchandise tent! 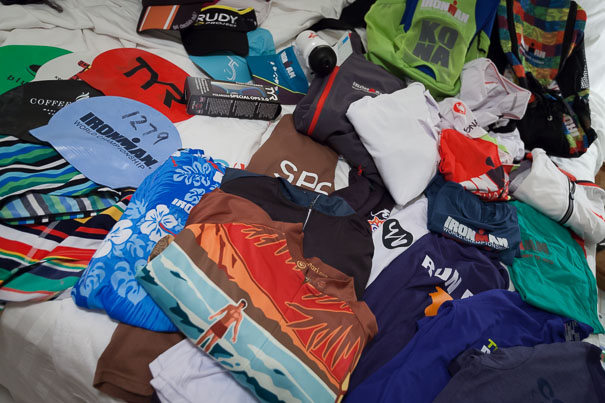 Closing the door to apartment #6-205 Kona Makai was strange. The place I’ve called home for a month and had some of the most amazing experiences of my entire life, and getting to share them with Sharon has just been the best. I’m a big softie you know (well, as my friend Ann put on Facebook as a comment to yesterdays blog - “I love the idea of Ironman David having a ‘favourite florist’!”) and my eyes did water up a little.

This place has been amazing and Pele, the goddess of fire, lightning, wind and volcanoes has been very kind and welcoming to me and for that I am grateful.

We returned the jeep, rolling into the rental car drop-off place with the vehicle practically running on fumes. At the airport we joined a really long queue to check-in, paid the 200 dollars to ship my bike back to London (it was 200 dollars each way) and made our way through security to the plane. Not before one final shaka when boarding the plane as unfortunately all of my attempts to lose my passport this morning failed miserably. 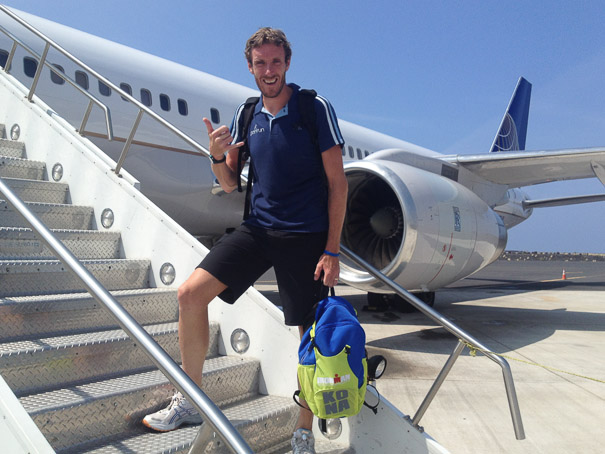 I’m now sat here on United flight UA1052 on the 2,370 mile journey from Kona to San Francisco. We then change planes and head to Washington DC before getting on the final transatlantic flight to London. I hear it’s a bit chilly at the moment.

Another update… it’s now 8am local time in Washington Dulles Airport. Two flights down and one to go before we land on English soil.

We’ve been on holidays many times before and after about 10-12 days of a two week break we’ve felt ‘ready’ to return home. Not this time. Seriously, not this time. We’ve had an amazing holiday, I did a ‘little’ triathlon in the middle of and it’s all been about the lifestyle we both love. The ocean, warm weather, swim/bike/run, friends, a few beers and some exploring. Oh, and not a drop of work! It’s been bliss.

There’ll be more posts on the blog soon, in the form of a race report. Stay tuned.