The second to last sunrise in Hawaii was watched as usual from the lanai at the condo we’re staying at. I’ve been sleeping pretty well the last few days, although not getting enough of it - that’s the problem if you go to sleep at 11pm and have the alarm set for 5:45am I guess.

This morning we wanted to go into town and have a swim from the pier (well, Dig Me Beach - they’re both pretty much the same thing) to see how much Kona has returned to normal. It was so so unbelievably quiet at 7:30am. We could park on the street just round the corner - we didn’t even need to look for space in the car park. It’s so so peaceful here now compared to a week ago when it was the day of the underpants run!

I set the GoPro up to record a timelapse video of the beach which I hope to do something with at some point - you’ll have to wait a while for this I’m afraid but I did get a few stills that give a good idea. 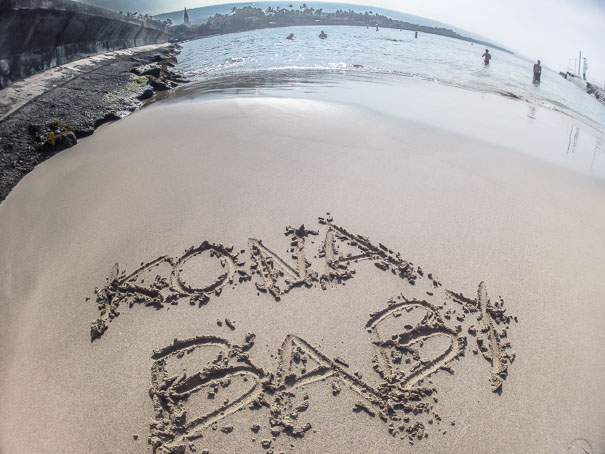 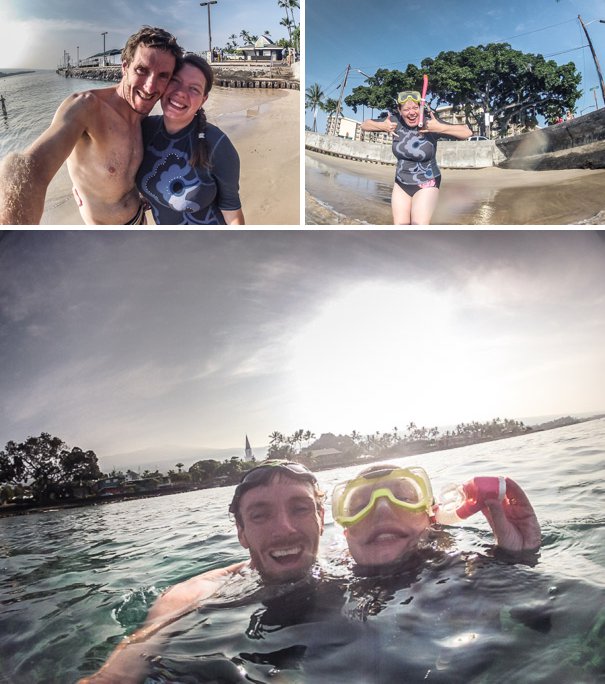 It was great to have a little swim with Sharon - the only plan was to get wet and look at the fish. A big tick on both counts. We then decided to cross over the pier and have a little swim from the lovely sandy beach of the King Kamehameha hotel. The water felt a fair bit colder this side of the pier but there were just as many fish.

I just love swimming in the ocean around here. Probably because I’ve not been attacked by a shark!

Yvonne van Vlerken, who finished fourth female in the World Championship was swimming with some friends and whilst Sharon was getting a coffee for us post-swim third place overall male Sebastian Kienle was just in front of her.

We headed home, picked up the boogie board that’s been sat in the cupboard since I arrived and went to Magic Sands Beach. There’s always loads of people playing in the shorebreak here and today was no exception.

Swimming amongst us this morning was a sea turtle. He (or she) came up, waved a flipper and then swam along the seashore a little more without a care in the world for the swimmers all around him. 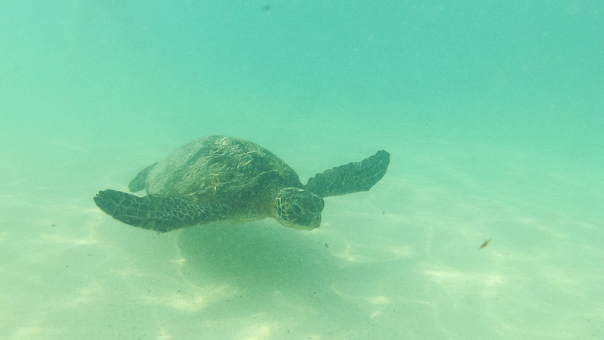 We had a right laugh out there this morning in the ocean. It’s funny… Sharon says she doesn’t want to do something, then she does it and loves it! Boogie boarding is one such thing. I just need to get her to sign up to an Ironman now… 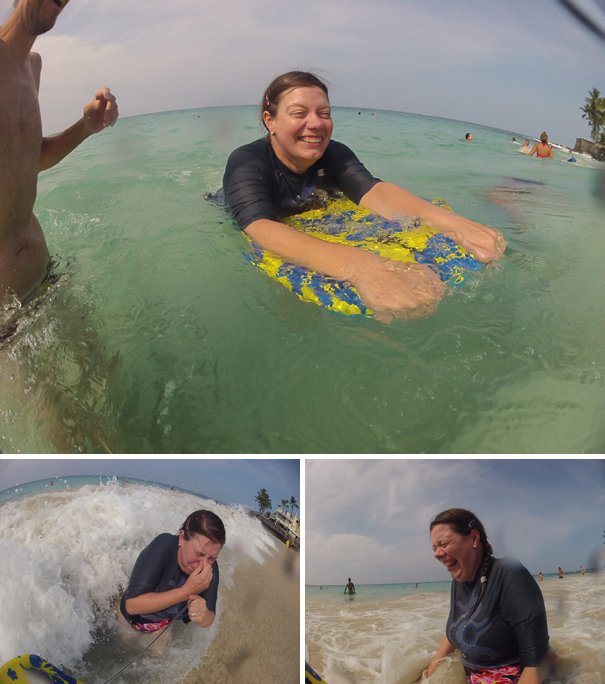 I said to Sharon that of the hundred or so people at the beach I believe I was wearing the smallest pair of shorts/trunks out of everyone! Oh my, I appear to be turning into a German tourist! 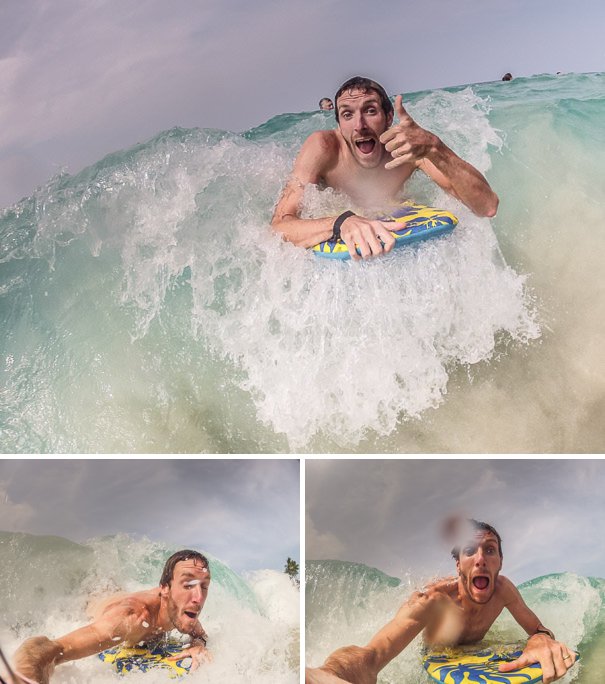 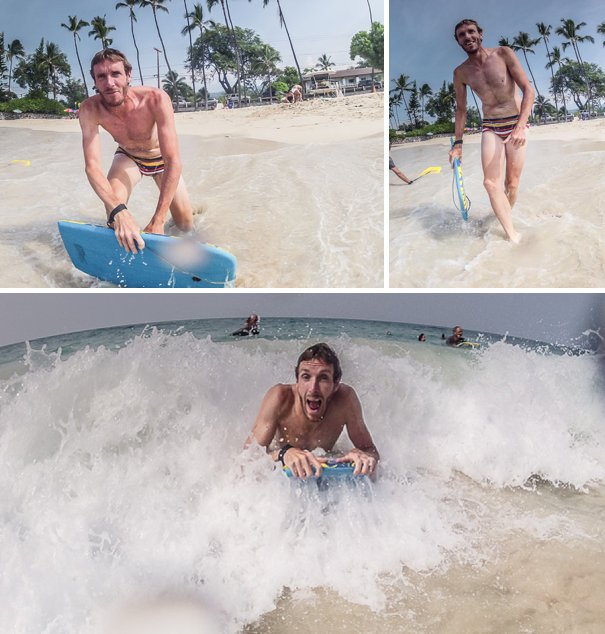 I found half of the beach in my trunks - which really does surprise me as there’s not a great deal of room in them! The other half of the sand on the beach was found in Sharons swimsuit.

Before heading home I had one of the (cool) freshwater showers and seeing as though the ladies who read the blog have been missing out on some Funky Trunks action (eh Carol D.?) here’s just a casual shot of me in the shower!! Sharon (and I) almost pissed ourselves laughing when we took the photo. 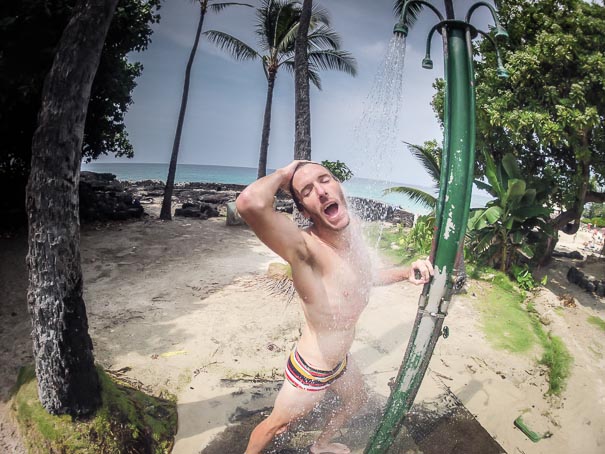 Over lunch we thought a bit about packing our bags for the flights on Friday but decided it would be better to pack after sunset - there were daylight hours to enjoy. We jumped back in the car and headed south a little, but first I wanted to stop by the florists down the road….

Early on in the marathon on Saturday afternoon the run heads past an aid station managed by Michael and Amy from the Island Orchard Florists shop where I bought Sharons lei a few weeks ago and also a few other flowers. I knew they would be looking out for me and I was looking out for them. We saw each other as I ran past which I loved. As today is our last full day on the island I wanted to stop by to say thanks for their friendship whilst I’ve been here and to show them my finishers medal.

When I walked into the shop both Michael and Amy were there and they said that they’d put a photo of me on Facebook this morning! 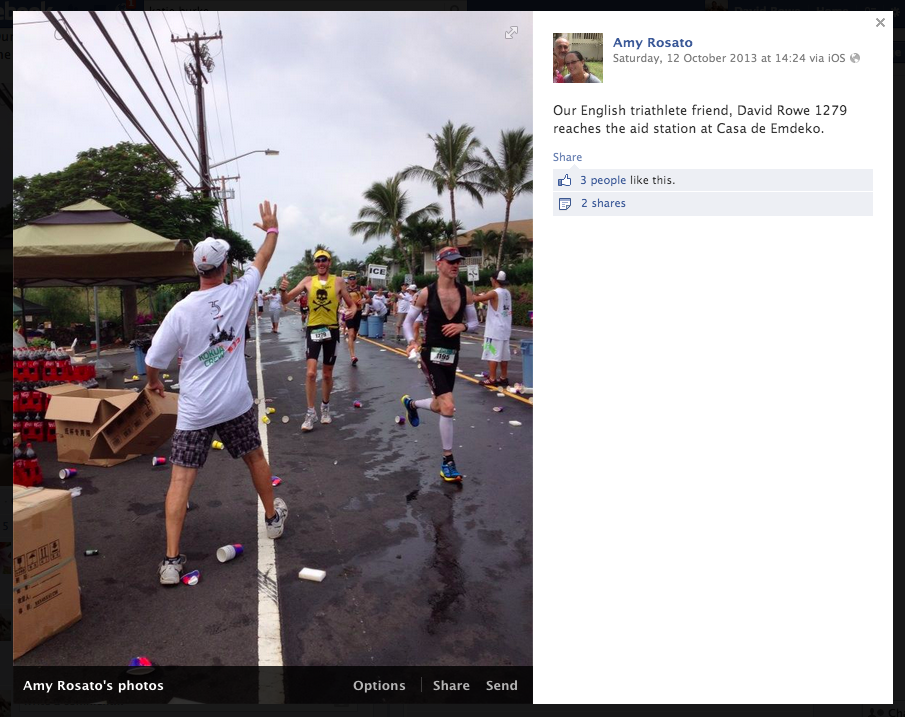 He then showed me his ‘Ironman Shrine’ and low and behold was the photo of me on the shelf next to one of him and Ironman legend Mark Allen! It said…

“2013 - David Rowe from England was in shop on several occasions. Said we would see him and encourage him to finish well! …. He Did.”

That was so so cool. As my eyes started to fill up, Sharon rushed to the car to get the camera so we could get a photo of it along with Michael, Amy and myself. 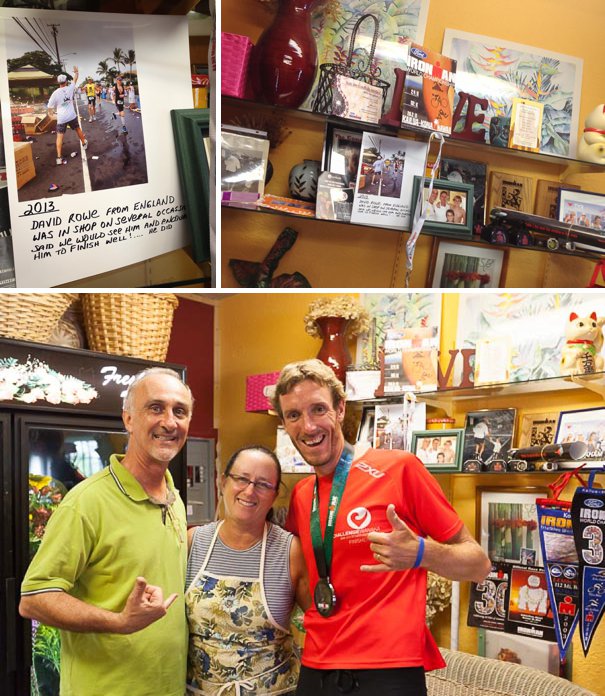 They asked if I would be back in Kona. I said yes. I don’t know when but I will be back. Sooner rather than later I hope.

It was so so nice of them.

Heading south of Kona we decided to stop in at the Painted Church. This is the church that I somehow cycled straight past about three weeks ago when I went on a bike ride down this way. It was a pretty cool place. 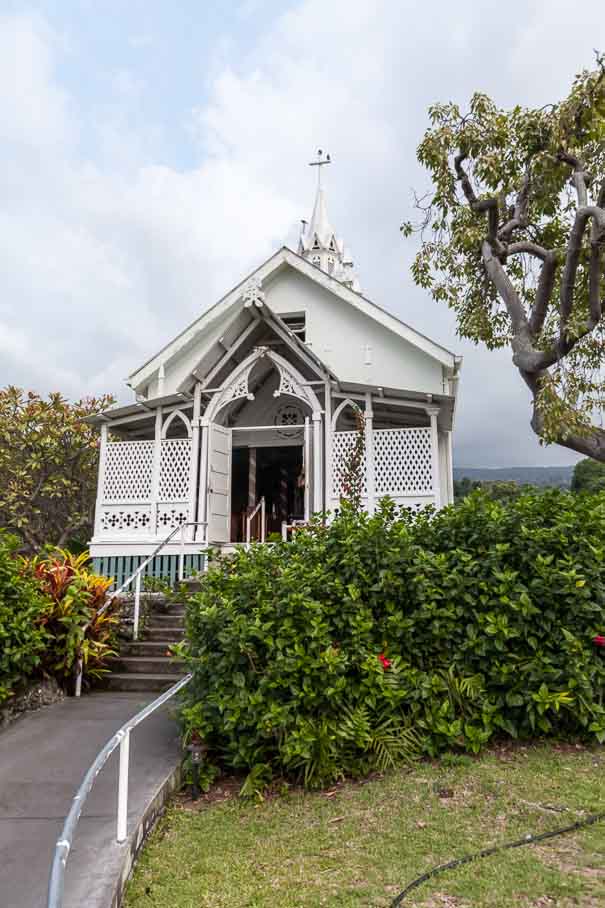 As we were in the area and also as the US Government Shutdown had just ended thus re-opening all national parks we headed to Pu’uhonua o Honaunau, a National Historical Park for a wander around.

There’s so much history here in such a small(ish), young island and it’s really interesting. I love to find out a little bit more about places rather than just doing the main tourist things in the middle of town. The park was very quiet and the afternoon was very overcast, so not much chance of a nice sunset. 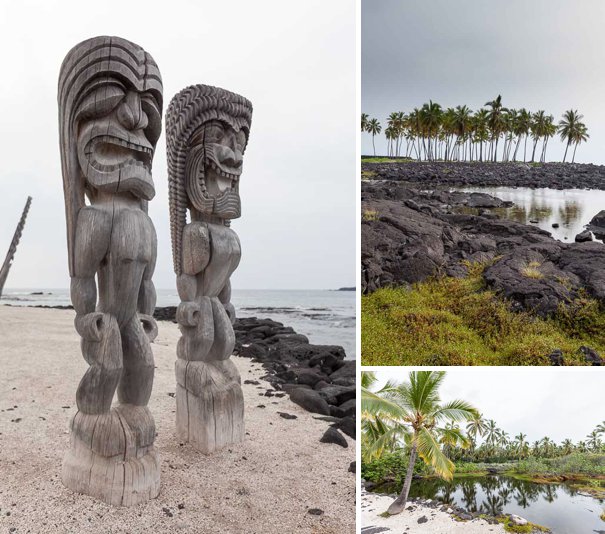 After leaving the park we headed home, had a beer by the pool, a final BBQ and then started packing our bags.

A little later after having a shower I said that I felt like I’d caught the sun today. Well… it turns out that I have sunburn that identically matches the design of my new skimpy swimming trunks which I was wearing at the beach this morning. OK then, if you insist…. one last photo! 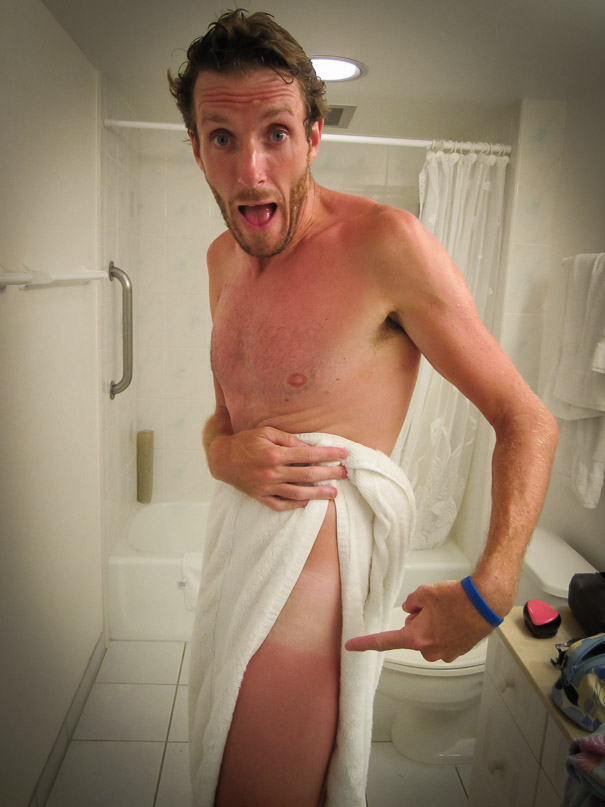