This is the second of a number of posts describing my day at the 2013 Ironman World Championship in Kailua-Kona, Hawaii. The previous part (pre-race) can be found here.

I quickly pressed start on my watch and started swimming. 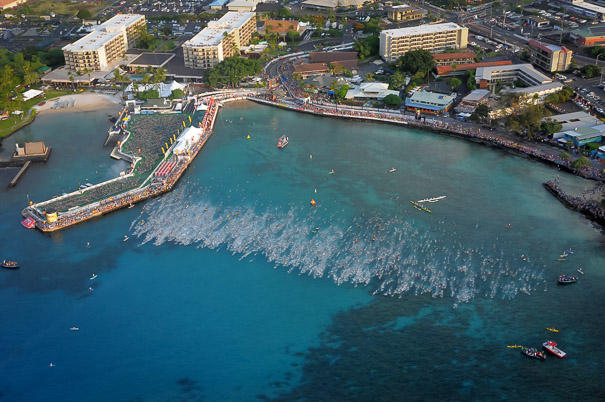 I had expected a good old fashioned bun-fight in the swim but it hadn’t materialised (yet). It was busy, don’t get me wrong. It was difficult to find any free space. When you think you have space it suddenly closes in on you and you have to either fight to get ahead, hope that the people beside you have space to move out of the way, drop back or just hold your ground and expect a bit of bumping about.

The swim course consists of swimming just under 1.2 miles out to sea (actually almost parallel to the shore alongside Ali’i Drive), you then turn right, swim a bit, turn right again and then you’re on the long home-straight back to the pier. Since the race I’ve had a look at the swim course using Google Earth and I firmly believe that my starting position on the far left of the course (facing the direction we’re going, in other words far away from the pier) probably only adds about 30-50 meters maximum onto the swim distance out to the far turnaround mark well over a mile away. Swimming a few metres extra for hopefully a little less ‘biff’ would hopefully pay dividends. 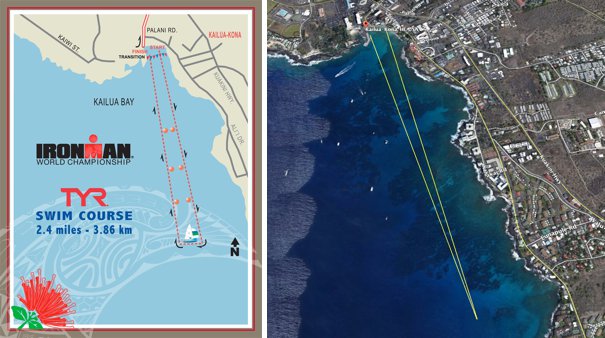 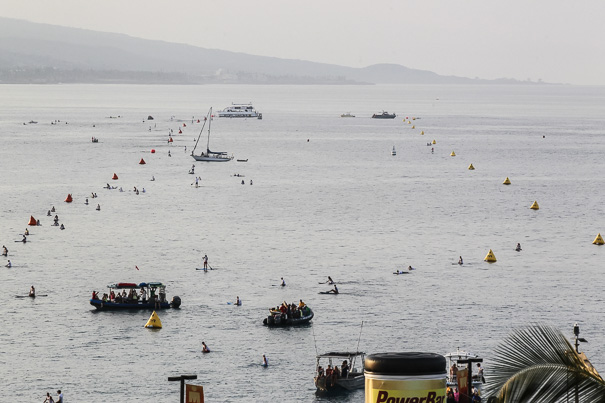 The course is swum in a clockwise direction. The turning buoys (boats) are about 1.2 miles in the distance.

In general sighting wasn’t that difficult. The ocean seemed really calm - I’ve written before that it’s been getting calmer every day since I arrived and the conditions were what I would call ideal. Every two or three times you look up and ahead you could see the marker buoys. I was over on the left and SUPs (stand up paddle-boarders) and kayaks were keeping us from heading in the wrong direction. 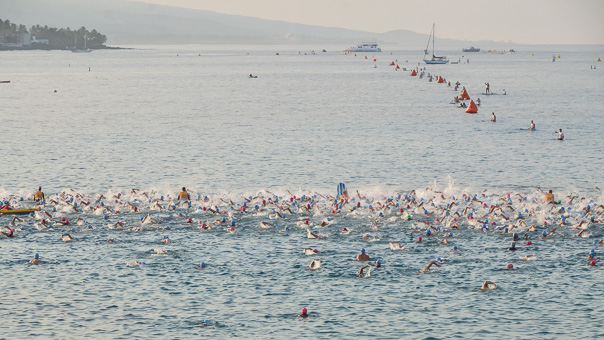 Even though conditions were good and there were loads of people up ahead it is easy to zig zag your way along the course and lose a lot of time by swimming further than intended. I did my best to head in a straight line, but at the same time trying to keep as close as possible to the swimmer in front of me (not that that helped me much in the training swim the previous week).

There’s a good effect you can get from drafting behind other swimmers and I did my best to find some ‘fast feet’ and stick with them. Every now and then you sit behind someone and because it might start to feel easier you then feel that you want to pass them and find some faster feet. Sometimes you do, sometimes you don’t. You might swim up beside someone intending to get past and then find that they’re swimming at a good old pace and it’s going to take too much to try and pass them - especially if there’s no faster feet in front of them to move to. Even with my being in a ‘quieter’ part of the start line there were people all around so plenty of opportunities to find faster feet to draft off of.

There were a few moments during the swim where I was incredibly close to other swimmers. At one point I remember my hand entering the water and smashing into another swimmers hand that was pulling back under the water. It didn’t half hurt. For a few seconds. You want to be close to other people to get a positive effect - but on the other hand not too close as to keep hitting them as it messes both swimmers rhythms. 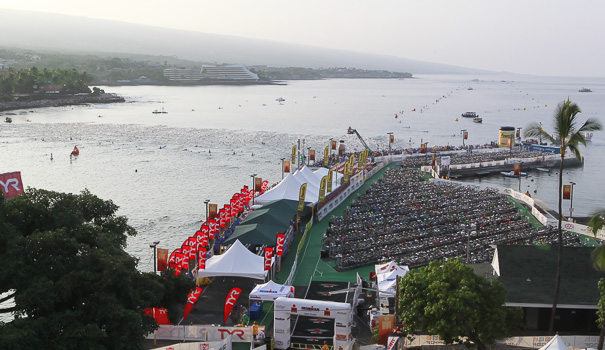 As I reached the turnaround markers I got caught in a bit of aggro. It was busy round the buoys and I remember getting scratched on my legs a couple of times - presumably from a female competitor. Apart from that it was fairly uneventful. I just swum fairly strongly, but never too hard and was well within myself. It felt easier than the training swim a week ago.

When I did the training swimit felt like it was never ending. Today it didn’t feel like it at all. Yes, it was a long way but I think with all the people around and constantly looking for someone to draft off, sighting and working on good technique it didn’t seem to drag on at all. I think I was concentrating so much on these aspects that I don’t really recall looking around much and admiring the amazing underwater fish tank that I was swimming in. I’d seen plenty of fish anyway whilst swimming since I got to Kona, so missing out on it during race day is just fine.

Heading back to the pier it got exciting. The swim was nearly over and that would be the first part of this huge race done. The swim is the part of the race that worries a lot of people, myself included. It was going really well - at least I thought it was. The true result would be from looking at the clock when I reached dry land.

I swum alongside the pier and on every breath to my left I could see crowds of people stood there watching us swim to shore. I also started to hear noise from the PA system. When I reached Dig Me BeachI was excited to run up the steps. I’ve seen photos and videos of the steps. Heck, it’s just a set of steps but for me these are special and are pretty iconic for the race.

As I ran up the steps I got a shout (and a couple of photos) from Tamsin. She lives only a few miles from where we do in London and is here in Kona to attend the annual Ironman Sports Medicine Conference and also to work in the Ironman medical tent on race day.

She gave me a shout of support which was lovely. The first of many friendly faces out on the course. 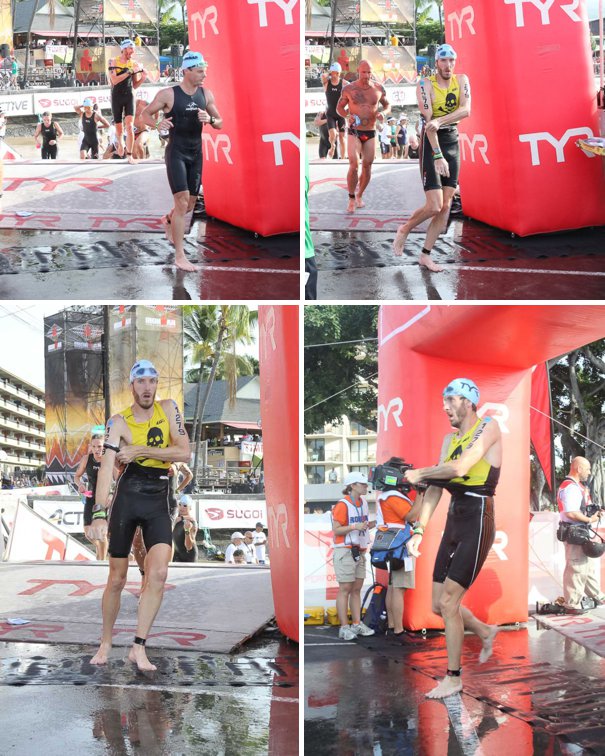 I ran up the steps, unzipped my swimskin, saw a large clock that said 1:04:50 and smiled big time. I feel that I swim much better in a wetsuit (the buoyancy helps me a lot) than without. This was the first Ironman I’ve done without a wetsuit (they’re not allowed as the water is too warm) and swimming only a few seconds slower than I did at Lanzarote earlier this year (which was a wetsuit swim) or Challenge Roth (also wetsuit) in 2010 was great to see. At Ironman UK in August I swum just over an hour but the general opinion that day was that the Ironman UK course was short.

I think there were some fairly substantial currents in the ocean for the swim - looking at some rough splits from my GPS it took me 27:57 to get to the first turn mark. To get back from the second turn mark back to the approximate race starting position (so under a couple of minutes away from the ‘steps’) took around 32:44. So nearly five minutes slower coming back than going out. Or perhaps I was just swimming a lot slower on the way back!

At the top of the steps you run through a cold-water shower section. This consists of around 20 or so short lengths of hosepipe hanging down from above. I grabbed a hose, rinsed the saltwater off of my face and then gave a quick blast of cold water down my shorts as it had been suggested that it was a good idea to get the salt away from areas that are going to rub for the next few hours on the bike!

I ran through the swim-to-bike bag collection area, grabbed my bag and ran to the mens changing tent. It was chaos in there. Naked and half naked bodies everywhere. All I needed to do was take my swimskin off, put in the bag and take my bike shoes out and find my bike. That was it. Maybe a plan for next years triathlon races will be to have my bike shoes already attached to the bike (although I did see quite a few bikes in transition without shoes attached, including at least one professional racer).

Once ‘showered’ and changed you then run round the perimeter of the Kona pier to collect your bike. This is to ensure that everyone racing completes the same distance in transition, no matter where their bike is racked. As usual there were volunteer marshals everywhere to try and ensure that you run the right course and don’t get lost amongst 2000+ bikes.

Here’s one little known point (at least to me anyhow) about the bike transition. When talking to one of the 5,000 volunteers involved with the race I found out that during the swim, teams of volunteers checked every tyre of the the 2000+ bikes racked in transition. That’s well over 4,000 ‘squeezes.’ If there’s any flat tyres they get one of the teams of mechanics along to replace tubes/tyres to try and ensure that there are no flats at the start of the bike course. 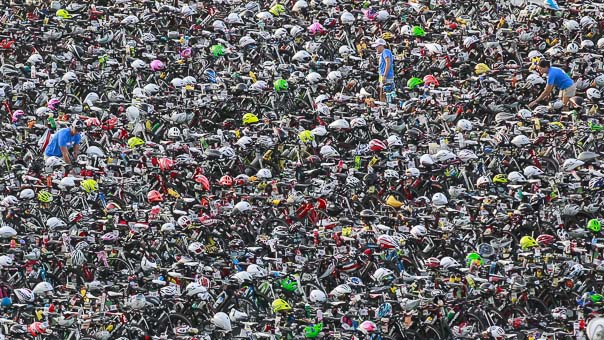 This is one of little things that makes a difference. Some you notice (like the unbelievable number of volunteers ready to help/escort you with just about anything) and then there are others such as the tyre checkers who get to work whilst you’re swimming 2.4 miles.

I got to my bike, quickly put my bike shoes on and then ran with my bike to the bike mounting line. I crossed the line, jumped on my bike and started to pedal.