Daylight is pretty much from about 6am through till 6:45pm. My plan is to make the most of the ‘light’ hours and not worry so much about the dark ones. Ironman is really starting to show its face in town at the moment. Signs are appearing on shops, every street corner seems to have a sign for ‘Ironman special massage’ details, the crowds are starting to appear and its getting more and more exiting. 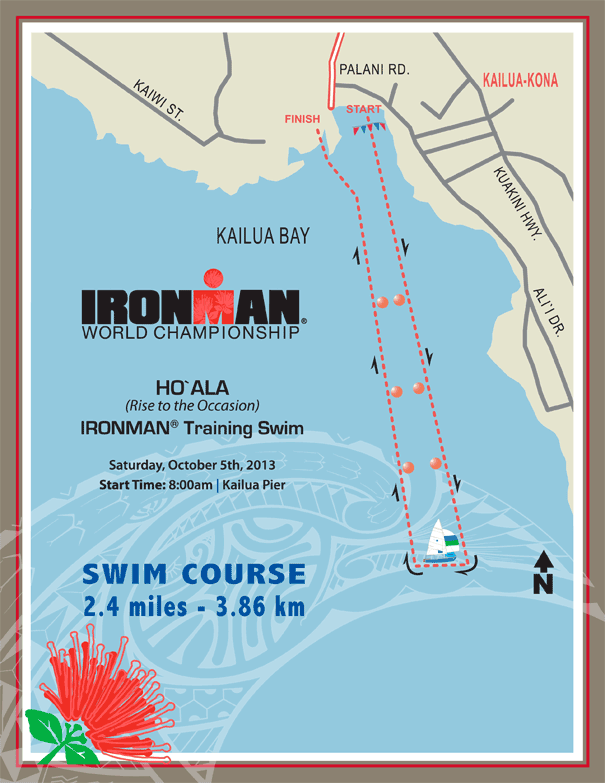 The first event in the Ironman race week is the Ho’ala swim. Ho’ala roughly translates as ‘wake up.’ The Ho’ala (Rise to the Occasion) event is is a ‘training swim’ (race) held on the 2.4 mile Ironman swim course. The finish is slightly different - we swim back to the beach at the King Kamehamehahotel. This was where the swim used to finish many many years ago (now the swim finishes on the other side of the Kona pier).

I entered this a week or so ago and the entry fee helps fund support the Kai Opua Canoe Club and the Ahu’ena Heiau (“the religious temple that served Kamehameha the Great when he returned to the Big Island in 1812 and is considered the most historically significant site in Hawaii”). With the race starting at 8am I got down to the pier to register at about 7:15am. A few of us brits seemed to congregate together which was nice. It was also great to see Paul Deen, who qualified at Ironman Copenhagen only a couple of weeks after I did. He’d arrived on Friday evening and was just starting to lap up everything Ironman. #bromance 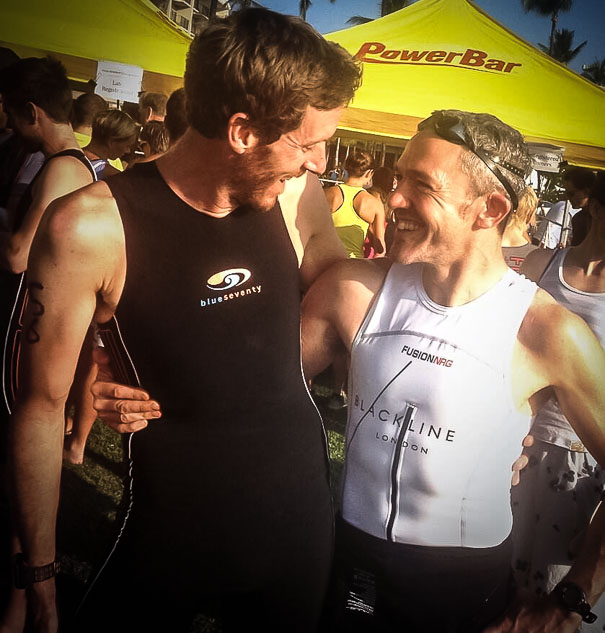 After trying my swimskin a few days ago in the water and then running in full kit yesterday afternoon for this full distance swim I went for the full race day outfit - so bike/run shorts and tri-top underneath the swimskin.

Waiting around for the start over the loudspeaker system was commentary and chat from Greg Welch. He’s an Ironman legend. He won the race in 1994 (with one of my favourite ever winning ‘leaps’ over the finish line) and was the first non-American to win the Hawaii Ironman.

“In the 17 year history of the event since 1978 only Americans had won the men’s race. From 1980 to 1988 only 3 men won it: John Howard, Scott Tinley, and Dave Scott, the latter winning it 6 times. In 1989 Mark Allen defeated Dave and won 5 titles through to 1993. In 1994, with Allen sitting out to rest his body and concentrate on marathon running, it seemed the year that a new champion could emerge.”http://www.leisureactivist.com/archives/1448

One of these two won the Hawaii Ironman in 1994. The other had no idea what triathlon was.

I took advantage of (well, made myself) a photo opportunity with the man himself. Another celebrity… tick! If you’re wondering why he has a GoPro camera strapped to his chest it is because the 2013 Ironman World Championship is sponsored by GoPro. 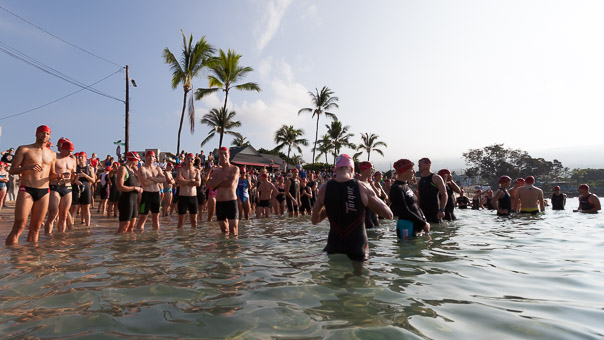 I headed into the water for a quick splash and to make sure my goggles felt OK. Paul had just been for a little warm up and when he returned tried to push me over. Thankfully my stomach of iron (er, or possibly shave ice) resisted his weakness and he got rather wet! 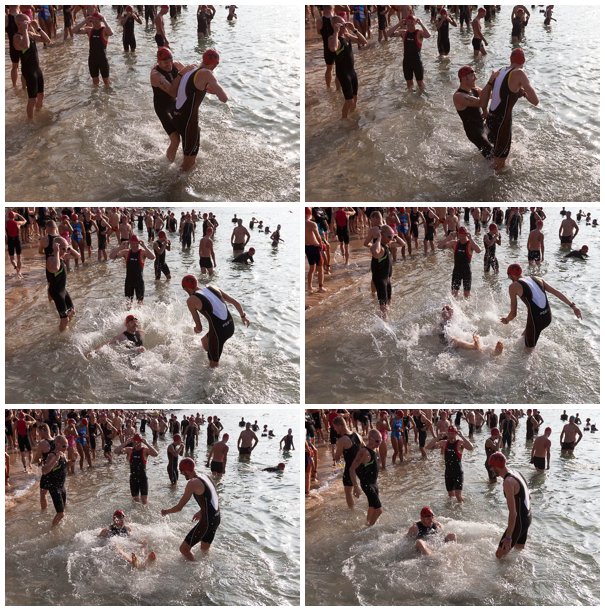 Ironman legend number two then lined up with us. Pete Jacobs from Australia. He won the race in 2012. Another photo and then it was time to get ready for the race. 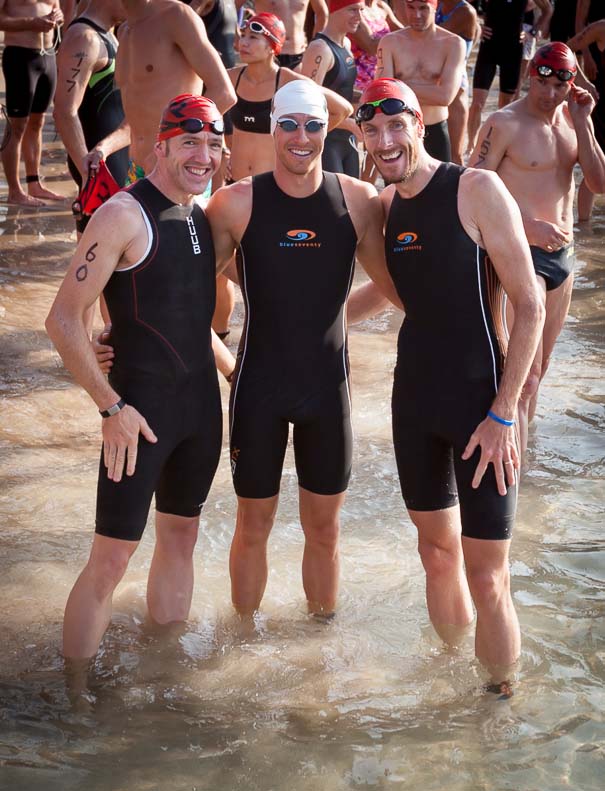 The swim start is pretty much the same as it will be in a weeks time. It’s a deep water start which you have to swim for a couple of minutes or so to get to. Then you just tread water waiting for the starting signal. I positioned myself on the left side as I really didn’t want to get pushed up against the marker buoys early on with no room to escape. 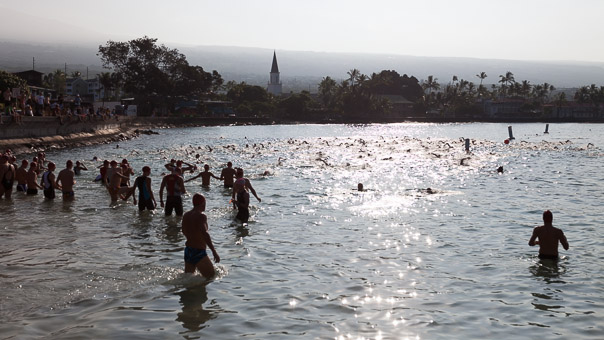 Swimming to the start line

244 people entered the race so it was a pretty small field compared to the 2000+ that’ll be on the line next week. This would be a good opportunity to swim in a (relatively) busy ocean and get some drafting practice. 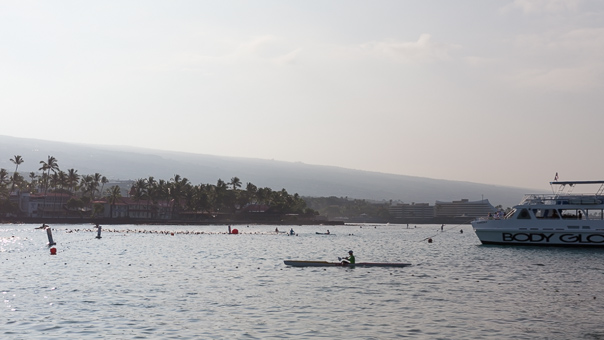 The start line is a little way out to sea

The starting signal went and off I went. 1.2 miles one way, turn round a big orange buoy and swim 1.2 miles back. The start wasn’t too hectic and I was able to control how much ‘crowd’ I wanted to swim with. The field thinned out fairly quickly and I kept finding myself near the front of what I believe were small groups. The reason I knew I was near the front (or at least I knew people were behind me) was because my feet kept on getting tapped. It’s great drafting for the person behind me and I have to just try to ignore it as best as possible.

The swim to the far turnaround buoy felt like it took forever. Maybe the currents were against us I’m not sure. It just went on and on! There was nobody right beside me so I did a mighty fine ‘roll turn’ around the far buoy and then headed back for shore (1.2 miles away). I hit the lap button on my watch so I could see how long it took later (it was 35 minutes 47 seconds to the turnaround).

On the way back there was a small group of us swimming together and I found a pair of feet to try and stick behind. Right behind me was someone tickling my feet every 5-10 seconds or so! I think the current must have been pushing us out to sea a bit because after a while we found ourselves close to some of the safety kayaks and as I glanced to my right I could see we were a fair way from the the orange buoys. A bit of a detour back towards the right direction and I started sighting directly on the finish area (part of the ‘King Kam’) hotel rather than the feet that were in front of me. As it turned out when looking at the GPS date from my watch post-swim I didn’t do so badly after all.

I’d say I swum about 85% of the second half on my own - something I’ll want to avoid next week (hmn, slightly better sighting and 10 times as many swimmers will probably help with that!).

As I neared the shore I could see the large finishing arch. I made land (hmn, isn’t that what explorers did, not swimmers?) and ran up the beach and over the timing mat. 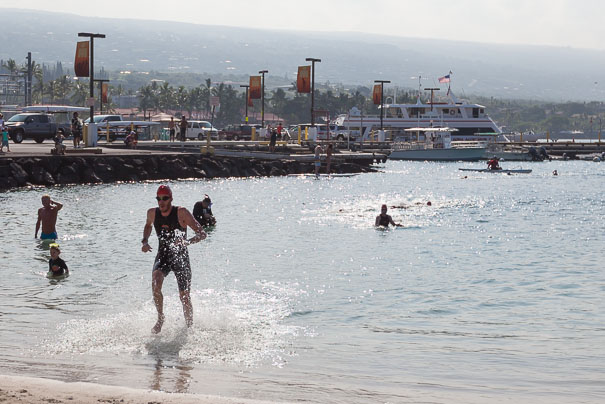 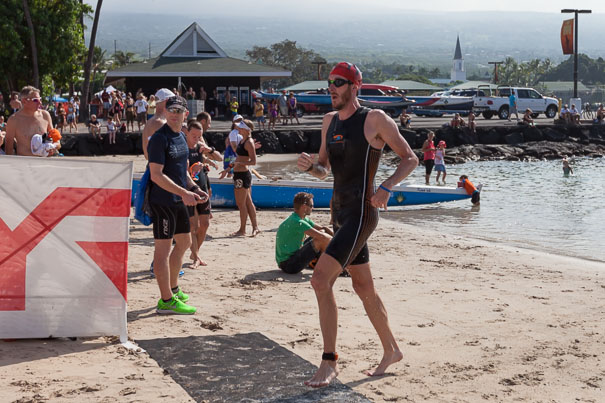 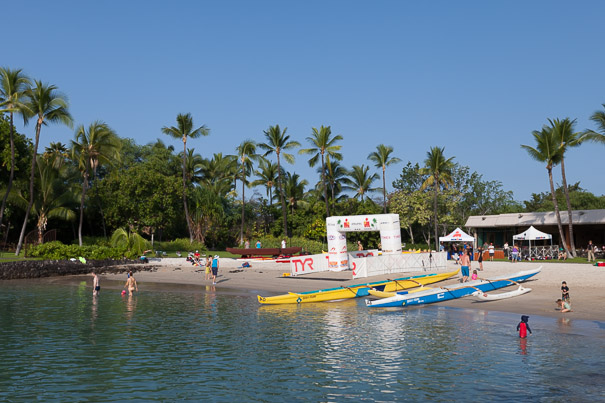 My time was 1 hour 10 minutes and 4 seconds(76th out of 221 finishers).For a non-wetsuit swim where I know I made mistakes I was pretty happy with this. It’s all about preparing for race day. So I swam the outbound part in 35:47 and the way back in took 34:17. This is all good.

I’ve been wondering about what kind of swim time I’d be hoping for on race day and hoped for something close to 70 minutes this morning. Being 10 seconds out is good enough for me. Anything close to this would be ideal come race day. The race was won by Pete Jacobs in 50:54. Matt from Team Freespeed was seventh in 55:54. Nice. 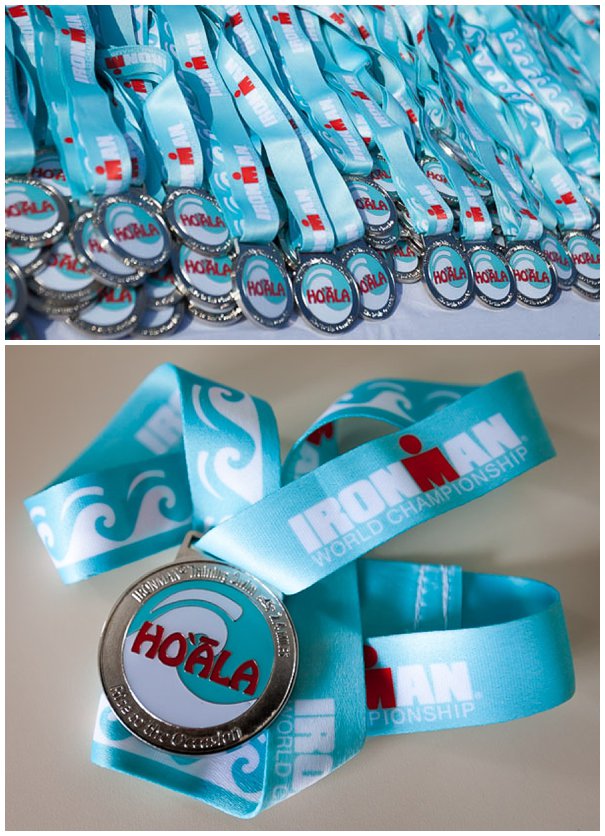 Post swim I hung around on the beach a bit chatting and then after getting changed had a takeaway coffee at a place over the road. A group of us the walked back down Ali’i Drive and Sharon and I headed home for breakfast - which we ended up having at about 10:45am.

After our late breakfast it was time for a little culture as we headed off to the Kona Historical Society centennial celebration of the Kona Coffee Living History Farm. You may recall that I went to a talk about the farm a couple of weeks ago. A few of the volunteer staff remembered me and were pleased to see a ‘tourist’ trying to learn and see a bit more about the island rather than just swim/bike/running. I got a few good luck wishes from people. It was nice. I know that lots of people go on about 100% Kona Coffee and it’s been great to learn a bit more about the history of coffee in the region and look around an authentic farmers home. It was really interesting. 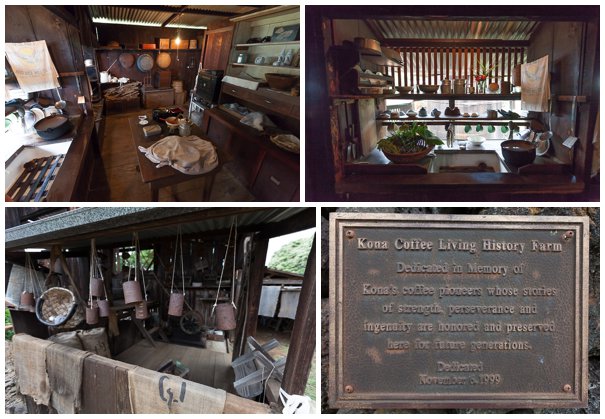 Back home for a late late lunch and then just an afternoon of lounging around. I’ll take these opportunities to rest as race week will be fairly busy.