This is the fifth and final one of a number of posts describing my day at the 2013 Ironman World Championship in Kailua-Kona, Hawaii. Previous parts arepre-race,swim,bikeand run. There’s also over 30 other daily blog posts from Kona also available to view as part of the Kona Diaries 2013.

The last post finished with the following “Stay tuned for another post where I tell you what happened between 5:30pm and midnight on race day…” - well, it’s about time I finished it off.

So, after crossing the line, being presented with a lei (and little sweat-towel) I walked with ‘my’ volunteer away from the finish line and to a table where a lady was continually pouring cups of coke. I found a chair just about within arms reach of the table, smiled a bit and had myself a few cupfuls.

I was then greeted by Jeff. He’s a chap who lives in our condo block. He’s one of the 5,000 volunteers at the World Championship. After a few minutes (and probably about a gallon of coke later) I moved off to the ‘recovery’ area. This is in the grounds of the King Kamehameha hotel and it was (as expected) really well organised. I picked up my pre-swim bag (containing dry clothes and a phone) and hobbled off (the blister or whatever on the sole of my left foot was really quite painful).

You don’t get your medal at the finish line - you collect that from a series of tables (organised by race number) and collect your finisher t-shirt at the same time. The t-shirt is really nice. Oh and as for the medal, well - that’s amazing! And so so heavy.

The ribbon rubbed on my sunburnt neck! After what I’d gone through today it didn’t matter in the slightest. I put my medal on, found the endless pizza, ice cream and chocolate milk supplies, dropped to the floor and had a little picnic and sent Sharon a text to say that I was fine and would be out to see her in a little while. 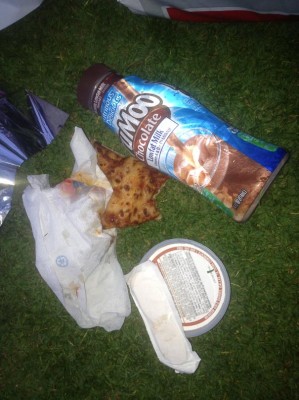 I couldn’t eat a great deal (which is normally the case right after a race - don’t worry, I make up for it later) so then got up and strolled back to where I’d seen Paul, Nico and Tom.

Carnage in the recovery area 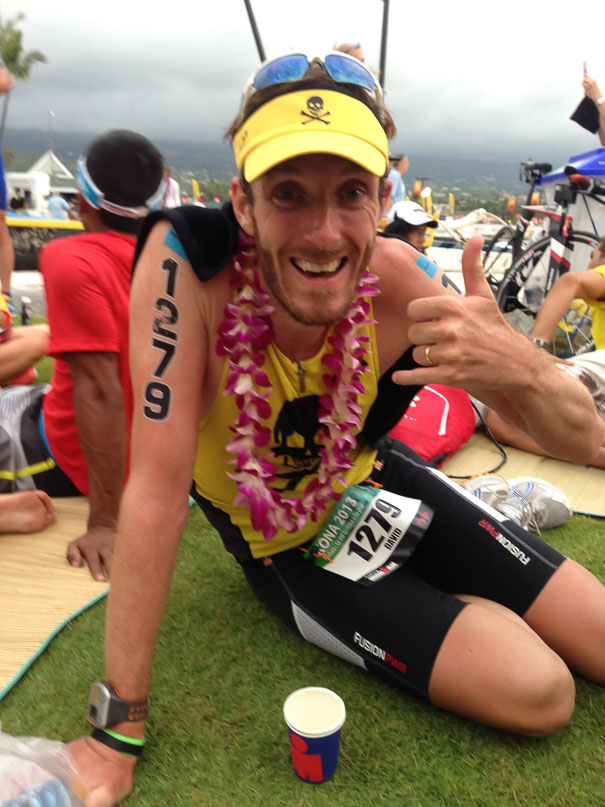 I had a quick post-race photo taken and then who did I see but Katie - you know - the volunteer lady who’s been stalking me all week! She was cheerful, I was grinning from ear to ear and I had my camera phone. Well, you know what happens next… 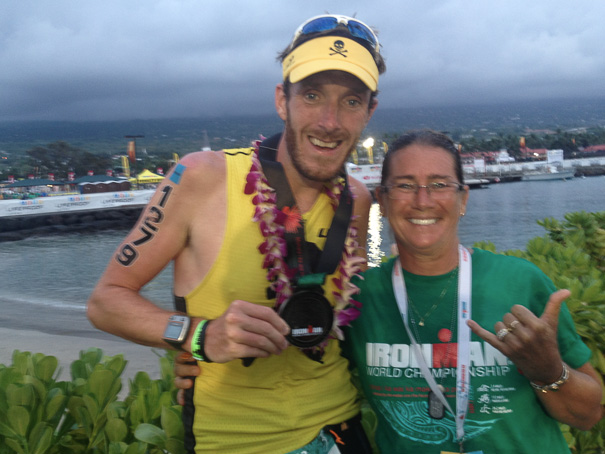 Eventually I got to collapse for a few minutes with the ‘lads.’ We shook hands (too tired, sweaty and no doubt smelly to hug!) and pretty much said all the same thing to each other “it was tough, it was hot, what a day.” 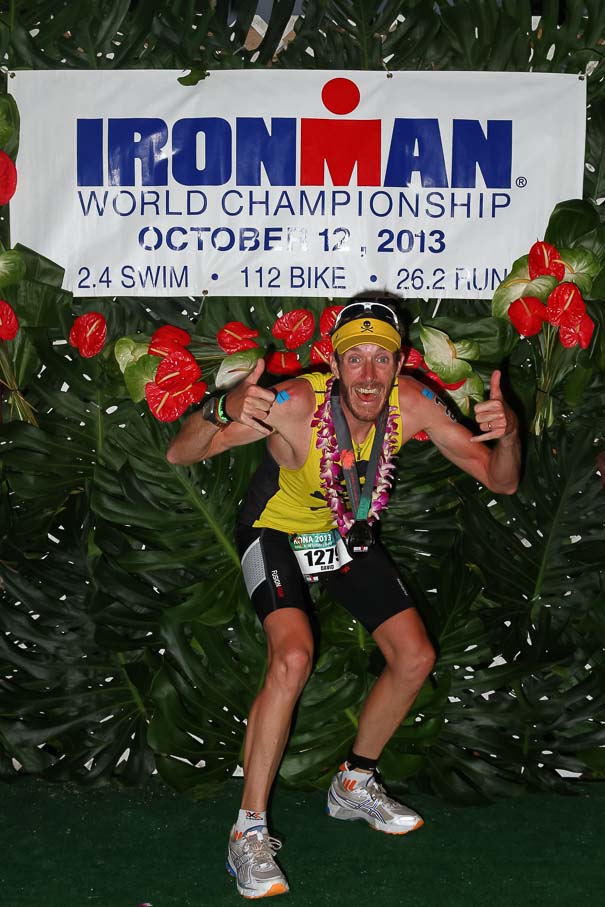 I then headed off to the changing room on the pier (where you shower/change after the morning swims) to get into some dry (and warm) clothes. My running shoes were heavy and wet and my socks were drenched. I pulled my left sock off to see the blister underneath only to be presented with a wrinkled foot that looked like I’d been swimming all day. Sharon later said that I had ‘trench-foot!’ I think she wasn’t far off. I also admired the excellent tan lines on my legs (that’ll be the waterproof once a day factor 50 doing a mighty fine job then)!

My shoulders were also keeping my nice and warm, along with my neck. Oh the joys of Ironman racing in the sun.

As I headed out of the finishing area I saw and chatted to Liz P. (a lady from close to where we live in the UK) who was battling to get into the medical tent for some ‘assistance’ - she failed! I got back onto Ali’i Drive and walked to where Sharon, Andy and Emma were. So many people would look at you and say ‘well done’ - I was smiling big time. People were running down the finishing chute, loud music was playing, the atmosphere was fantastic.

I found my crew (only a couple of hundred metres from the finish line), hugged, kissed and celebrated (and that was just with Andy!) sat down on the (rather sharp) coral wall beside the road and we had a bit of a chat. I was tired but buzzing. Sharon was about to head to a shop for a drink so I put my order in for a large bottle of coke. We watched, we cheered and then after a while I decided to head back to collect my bike. 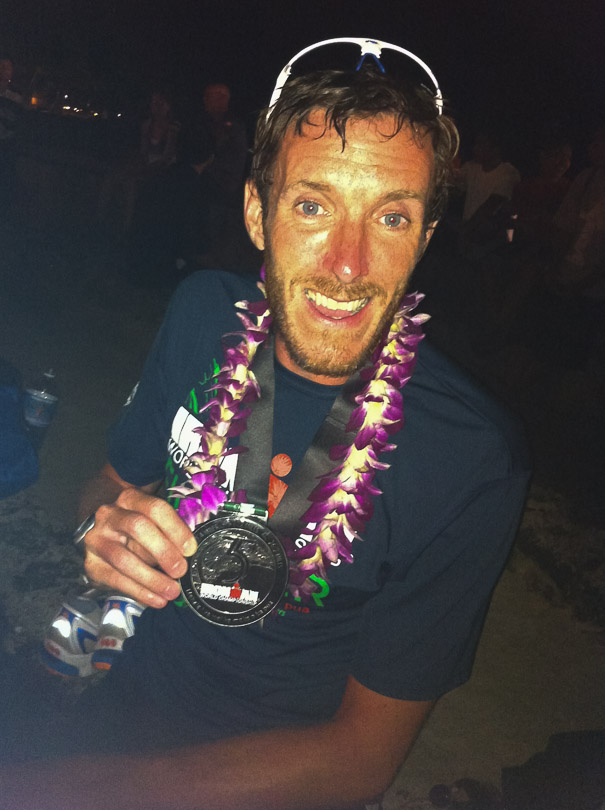 I then got one of the most ridiculous text messages that I’ve ever seen from Paul! 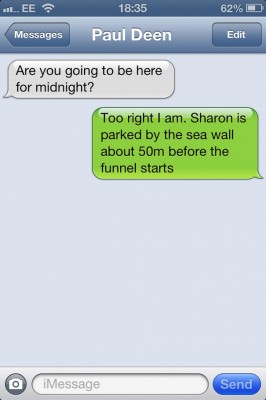 I headed back to transition, collected my bike and transition bags, found Paul and then headed back to our condo (that’s Sharon and my condo - Paul hasn’t moved in with us yet!). It was probably about 8pm at this point. We cycled (very slowly) along Ali’i back to the condo, dumped all of our transition bags that we’d been carrying on the bike (more things to rub on your sunburn), had a drink and then drove part of the way back into town. We walked (slowly) back to Sharon, proudly wearing our finisher t-shirts and medals and picked up a few beers from one of the local shops. 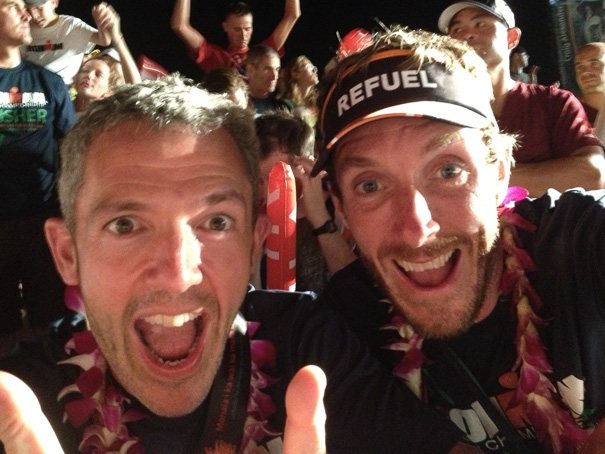 Deciding to get closer to the action we all strolled up closer to the finish line and found ourselves a few seats and a couple of spaces right on the side of the finishing chute. This would be our home until at least midnight - when the final race cut-off time of 17 hours is reached! Next thing I was called over by a rather tough looking policewoman who was standing in the chute. She congratulated me on my achievement and then told me that if I drunk alcohol in public she may have to arrest Paul and myself!

Our knowledge of American on-street drinking laws is minimal so Paul got to work and within seconds (well, a couple of minutes) made us look like the finest Ironman finishing hobo’s you’ve ever seen! 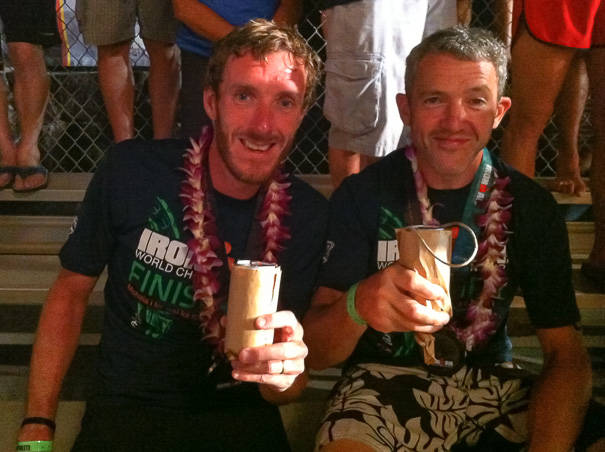 Note that Paul left the handle of the paper carrier bag when he created his secret beer holder device!

Hunger was starting to take over so Paul and I headed to the post-race athlete recovery area and had yet more chocolate milk and some hot food. He then headed off for a massage (I believe he was expecting to see the ‘Wattie Girls’ from the Thursdays Underpants Run) and I returned to our supporting spot.

On the way I saw Hanneke from the Netherlands (I didn’t realise at the time she was 5th in her age group overall). Awesome. 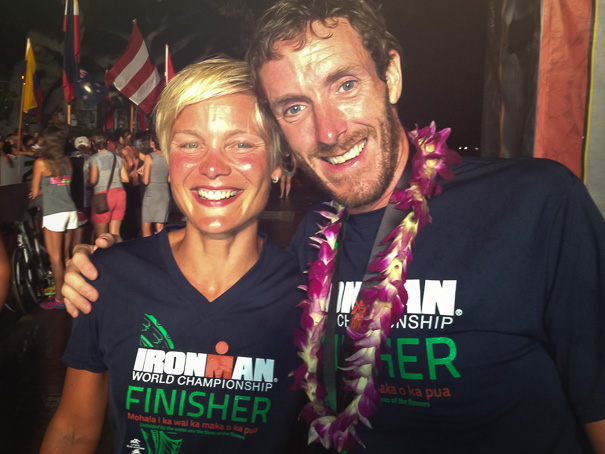 Back at the line and the party was still in full swing. The music was pumping, people were finishing the biggest race in the world, sponsors were running down the chute handing out freebies (read hats, visors and the odd t-shirt). It was brilliant. Ironman know how to put on a decent finish line party and I’ve not yet been disappointed. 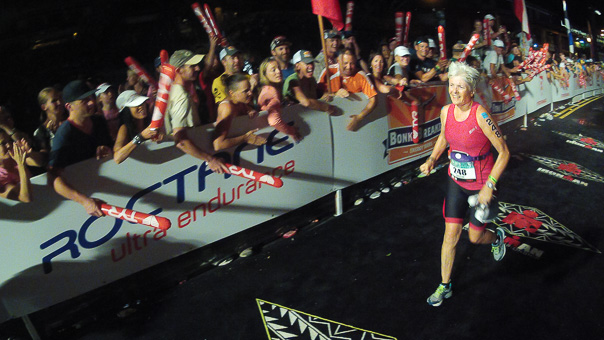 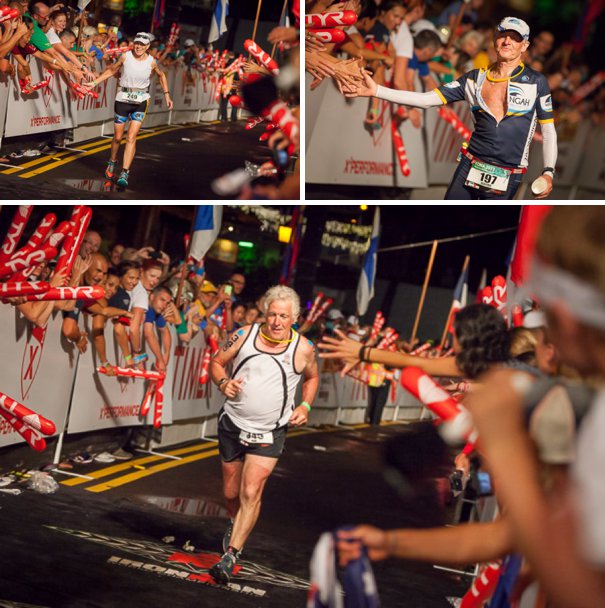 We slowly got to the final hour - it was amazing. Here I was, leaning over the side of the finishing chute, proudly wearing my t-shirt and medal and getting the chance to cheer in people who’ve done the same thing as me today - finished the world famous Hawaii Ironman. I was loving it. And beneath the pain on their faces I’m sure they were too.

During the final hour Mirinda Carfrae, the overall womens winner was at the finish line handing out medals and greeting the finishers. She ran out down the chute a couple of times (still clutching finisher medals) to give out some sponsors freebies and to high-five the crowd. 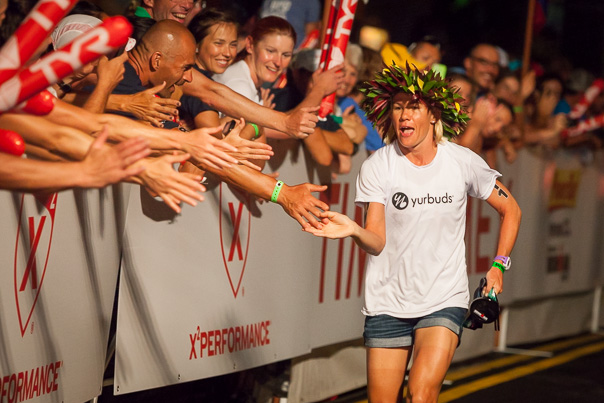 It was Andy, Emma, Sharon, Paul and myself having a laugh, a giggle and a sing-a-long all whilst screaming and shouting support to the people still out there running down the finishing chute to finish the race. 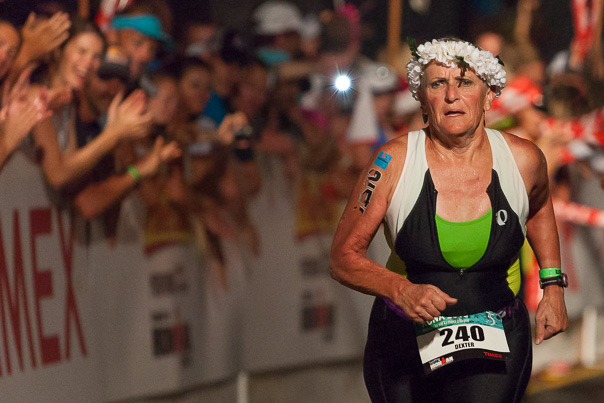 The 17 hour finish time cut-off (at midnight) was getting close. We saw 78 year old Harriet Anderson finish in 16 hours, 56 minutes and 51 seconds. In 2012 she finished in 16 hours 59 minutes and 19 seconds. She’s no stranger to the final hour of Ironman.

As the clock slowly ticked closer to 17 hours we heard that there were more people on the course trying to get to the line before midnight. Mike Reilly, the PA (and voice of Ironman) ran down the chute to find and try and bring the next person in before the cut-off. The crowds were going crazy when he found Karen Aydelott. Karen first raced in Kona in 1989 and finished the event 12 times before 2006. Whilst training for Kona in 2006 she was hit by a car. Two years later she had a leg amputated. She didn’t finish in 2012 and was back in Kona again this after qualifying (against able-bodied athletes) in Ironman Texas.

In sight of the finish line with two minutes to go, Karen poured everything she had into the effort. Race announcer Mike Reilly channeled crowd energy into her as the seconds ticked down to midnight. In pain and utterly spent, Karen powered forward, ignoring the clock as it hit 12:00:00, and arrived at the timing line 48 seconds after the cutoff.

From the sounds of the crowd, you’d have thought she’d just won an Olympic gold medal. 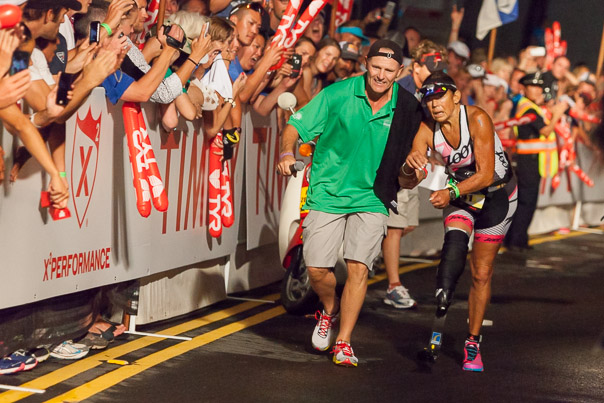 We screamed, we cheered, we waved our arms but unfortunately she missed the cut-off by 48 seconds - her race went wrong in the Energy Lab section of the run (16-19 miles) where she hadproblems with her prosthetic leg which necessitated changing to a fresh one - costing her precious time. It was so tough to watch.

A couple of minutes later the race officially ends and a fire-dance takes place together with a traditional closing song. 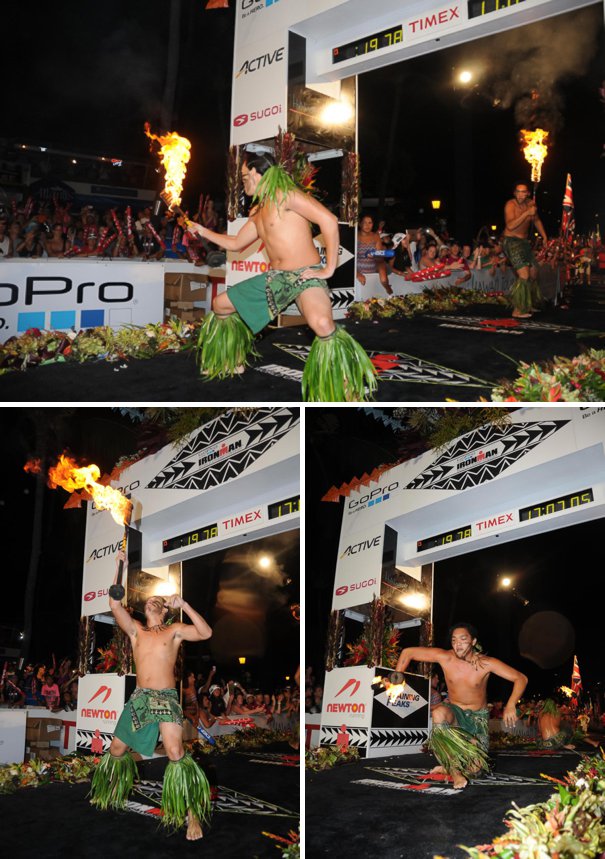 The music stopped and the crowds slowly started to head back home. Whilst walking back along Ali’i Drive we saw at least two people still racing to the finish. We stopped, we cheered and we encouraged them to get there - even though there were well beyond the 17 hour cut-off. Being out on the course for that long is something that I’ve never had to deal with. I don’t know whether I’d be able to do it.

We got back to the car, headed back to our condo where Andy and Emma jumped in their car for a journey back to their hotel that I think they probably hallucinated from tiredness the whole way. We then drove about four miles up the road and threw Paul out (somehow he managed to find his way back home and we saw him the following day!). Upon returning home Sharon and I had a drink, tried to relax a bit and then went to bed - not before seeing a message announcing that the Ironman Store opens the day after the race at 7am for all your Kona finisher items - so that was my post-race lie-in out the window!

What a day, what a race, what a place, and oh what a medal. This race was incredible. Everything I thought it could be and more. Much much more.