parkrun - you get out of it much more than you put in...

Since discovering Bushy Park Time Trial parkrun in 2006 we’ve got involved with the core team who put the event on each week. We’ve drunk coffee in Nero’s in Teddington, been on holiday (a week in Club la Santa on Lanzarote in 2007 and again in 2011), taken photos, marshalled, scanned tokens, entered names into laptops (remember those days), encouraged people in the funnel, made loads of friends and learnt that one of the best things about parkrun is everything other than the 5k bit in the middle when you put one foot in front of the other. We could turn up, run and then go straight home but by being friendly, chatting to people and offering to help we’ve got so so much more out of the event that we’d ever expected to. Through parkrun I discovered triathlon and from triathlon (and some training) I have been one of the fortunate ones able to run down Ali’i Drive in Hawaii on the way to finishing the Ironman World Championship last year. I love it, and parkrun is a staple of our weekends.

A few weeks ago a message found it’s way to Bushy parkrun from a family who run at St. Andrews parkrun in Scotland. They were visiting the area, were planning on running at Bushy and wondered if someone would be able to accompany their 10 year old daughter (there’s another two younger daughters as well) around the course (all under 11’s need to be accompanied) as she was too fast for her parents to keep up! She had a personal best of 20:45.

My name found it’s way into the frame and I jumped at the chance. I’d be more than happy to help out. A couple of message exchanges later and it was all sorted, Saturday 23rd March would be the day. Since agreeing, her personal best improved again to 20:17!

Arriving at Bushy shortly after 8:30am I met up with the ‘clan’ from Scotland (there were eight of them in total). After a couple of weeks of beautiful weather they must have brought down the cold windy air that we had this morning. It must have felt like home! 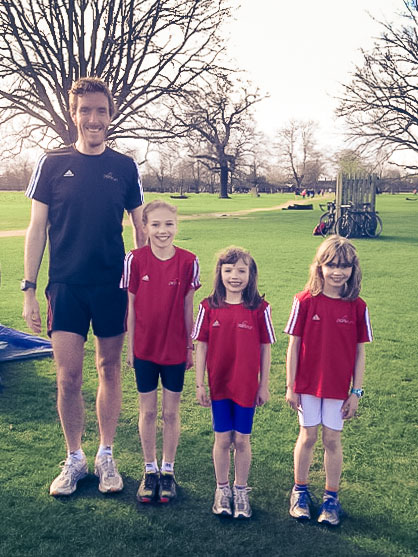 After introductions and a photo opportunity (“hey, look at this giant!”) we lined up on the front row and after an announcement from run director Ray that I was going to be ‘pacing’ a junior parkrunner around at close to 20 minute pace it was clear that the pressure was on! Not on Anna, but instead me!

A rather enthusiastic start (she went off like a bloody whippet!) I heard someone behind me say “that’s more like 16 minute pace” I had to race forward and suggest we ease off a little. We settled into a steady pace and we were off. 5k is a long way, and even longer if you’ve only got little legs (I’m not talking about myself here).

We got ourselves close to 20 minute pace and just pushed on. It wasn’t too busy where we were but no doubt much busier than it is at St. Andrews parkrun where they get on average just over 100 runners each week. Bushy seems be averaging around 1,000 each week at the moment!

A few people overtook us and there were a few comments made such as “wow, you’re doing amazing” which I think were aimed at the little lady and unfortunately not myself!

We ran well, there was no complaining (by me) and every now and then I’d give indicators of how far we’d run and how much further we had to go together with some words of encouragement. Coming round the final tree it was all or nothing and I’m pleased to say that she flew down the final straight at an amazing pace.

I was beaten, I was happy to be beaten (by a single second). We high-fived each other in the finish funnel, collected our finishing tokens and then cheered on her sisters and rest of the family who ran brilliantly. Anna deservedly got a lot of attention from people this morning, she got a new personal best time of 20:05 and an age grading of 84.98%! This was the fifth best age grading of the day at Bushy and she nearly beat a lady on age grading who finished 6th in the 2004 Athens Olympic games triathlon!

parkrun - you get out of it much more than you put in.