I took part in this race (well, long training run for me) in 2013 as part of my Ironman/marathon preparation. I loved it. It was a cold and windy day but I really enjoyed it. A few months ago I entered the 2014 edition of the race for another couple of lovely 10 mile laps in the Surrey countryside.

My plan for spring 2014 was to run the London Marathon and try and get a fast time that will guarantee me an entry for the next two years. My run training hasn’t been that great this year as I’ve been having a bit of a right calf tightness problem that isn’t really going away as quickly as I’d like it to. Although having said that after last weeks long run of just under 16 miles (my longest since Kona) my legs recovered well and I got a couple of good runs in this week including my fastest parkrun time since August. I don’t think that I’ll be running the London Marathon next month as I’m not happy with the number of ‘long’ runs (read 20+ milers)that I’ve done so I’ll probably defer this place (I can defer once) until 2015 and have a proper go at the run next year.

So, this left me with an entry to the Spitfire 20 mile run today. What should I do. Well… if it was a 15 mile race then that would have been better for me but it was a lovely day, I felt OK so thought I’d have a go at a steady 20 miles and see how things went.

Sharon kindly drove us (that’s me, Kirsty and her mum) to the start and was appointed our official supporter for the day (and emergency contact written on the back of our race numbers). We arrived with plenty of time to spare, had a little wander around the airport at Dunsfold (where the race starts and finishes) and found an ideal backdrop for a ‘team’ photo. 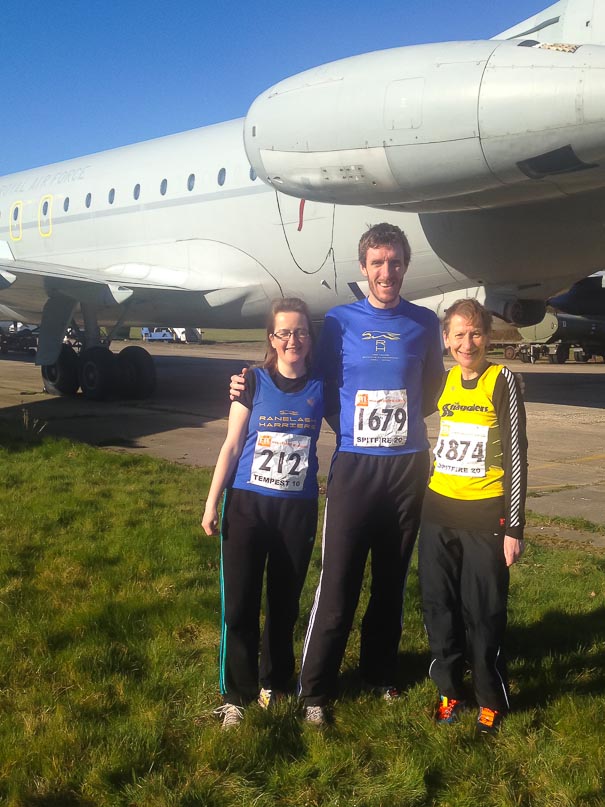 My plan was to run just under 8 minute miling (which would give me a finish time of 2 hours 40 minutes) but if I felt good then I might up the pace a little towards the end. 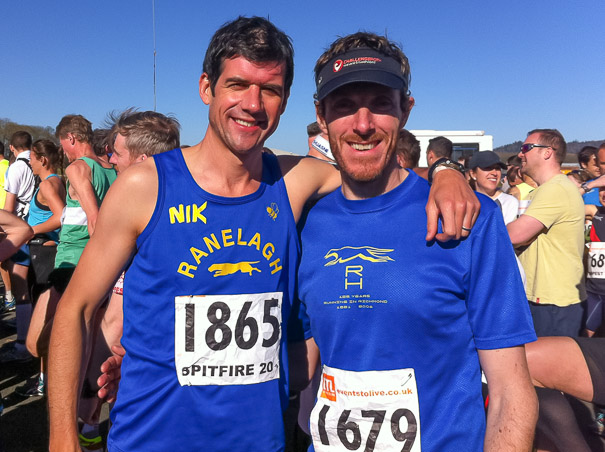 Fellow Ranelagh Harriers ‘buddy’ Nik at the start. I didn’t see him after the photo was taken!

I set off easy and got into a steady stride. My heart rate was nice and low and I was feeling very comfortable. I got chatting to another guy who was running and we kept each other company for about 10 miles or so.

I completed my first lap (10 miles) in 1:17:29 which is 7:45 minute miling. OK, so a little quicker then I’d planned. Anyone who knows me knows that’s pretty much to be expected! 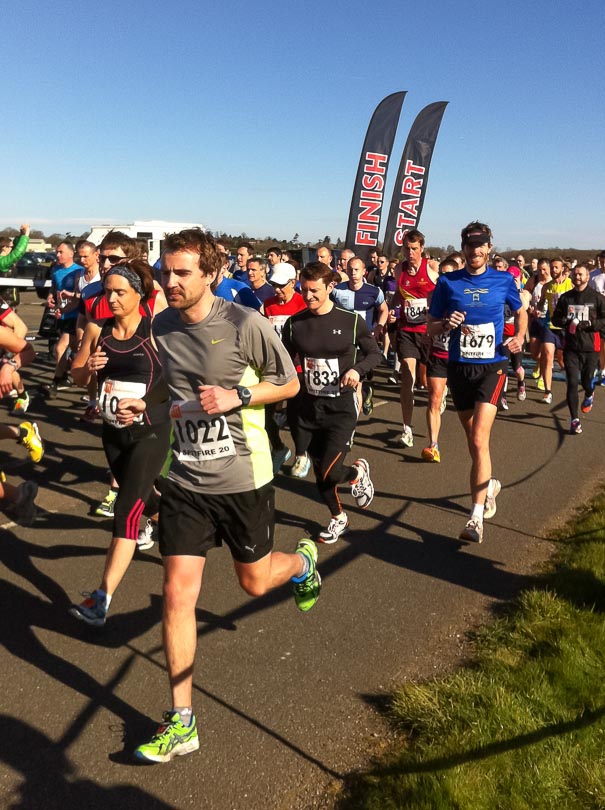 At about 17 miles I decided to increase the pace a little and pushed harder through to the finish. “It’s only a parkrun to go” were my thoughts!

I finished the race in a time of 2 hours 33 minutes and 57 seconds, meaning that my second lap was 1:16:28 (so a one minute negative split). That’ll do nicely. I also noticed that I was six seconds faster than last year! My overall average pace was 7:42 miling. Oops again!

I think the motivation for my negative split was the free chocolate bar that you get after you cross the finish line. Together with a couple of bacon sandwiches before we left and an ice cream on the way home made this an altogether excellent day out! 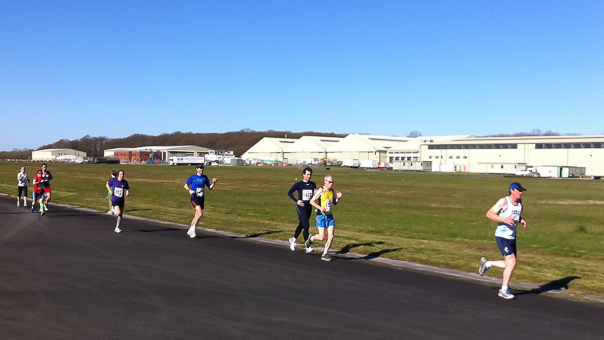