As I’m taking part in Ironman Wales in September of this year I always wanted to go and do a course recce before the event to get a feel for the bike route - which is by all accounts the toughest Ironman bike course on the circuit. Rather than do a self supported trip to Tenby to look at the course I decided at the end of last year to enter the ‘Long Course Weekend’ - this event consists of a Friday night swim, Saturday bike ride and Sunday marathon. You can also choose to enter as few or as many of the events as you like - and also do different distances for each.

Seeing as though this would be just under two weeks after Ironman France I decided on the full swim (2.4 miles), full bike (112 miles) and no running whatsoever.

So, Friday morning came and only a couple of days after getting my bike put back together after coming back from France I had it dismantled and back into Sharon’s car for the long drive to South-West Wales.

We arrived in Tenby to a lovely sunny day - I sorted the bike out, we went for a walk around town and got myself registered for the swim and bike parts of the weekend. I was given an assortment of number stickers, transfer and timing chips and no clear instructions on what needed to go where!

The ‘Wales Swim’ starts at 7pm (briefing is at 6:30pm) so we headed down to North Beach shortly after 6. The town was heaving with people - a combination of tourists, locals and people dressed in neoprene wetsuits. The swim venue is absolutely stunning from a spectators point of view - you can either go down on the sandy beach or watch from up above either in the town, along the harbour wall or many of the paths that lead from the town to the beach. It looked amazing.

I got myself neoprened-up and into the water for the compulsory swim warm-up. A few minutes later we were back on the beach for the briefing and after a 10 minute wait whilst we all shuffled really really slowly forwards we were off - just over 1,000 people - with just over 80% doing the two lap full distance (2.4 mile) swim. 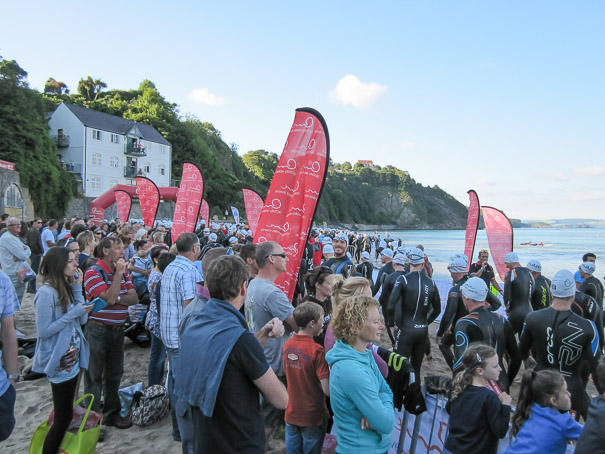 The swim start was going to be hectic with the first turn buoy only about 15 metres away from the start. Much that I despise starting with the fast boys at the front I decided to get stuck in, swim crawl/doggy/whatever stroke to the first mark, hang a sharp left then find clean water. It seemed to work. Within a minute or so I was swimming in clear water. Perfect. 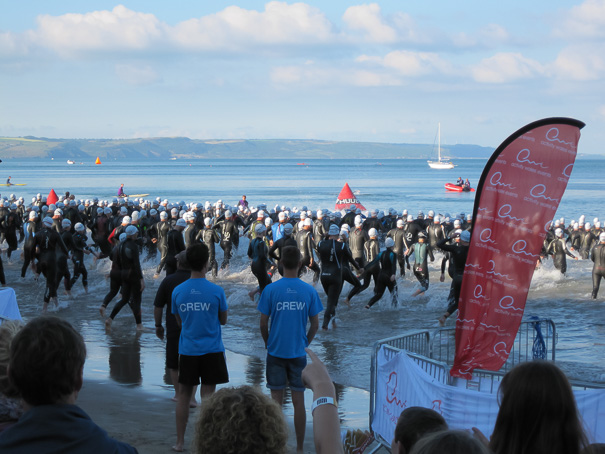 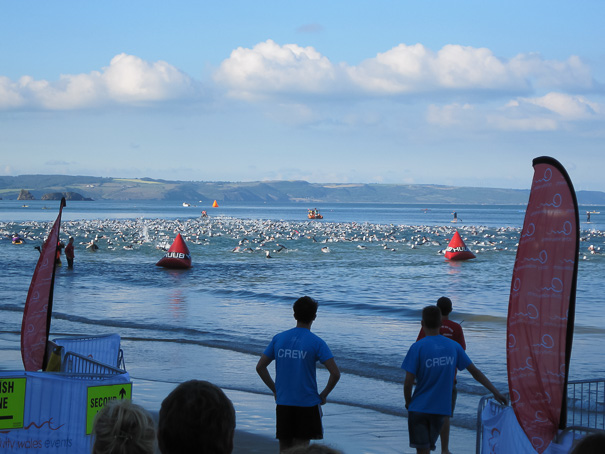 The first lap was fairly uneventful. You swim along the coast to the first marker, hang a sharp sharp right and then head back towards Tenby harbour, using the lifeboat station ramp as a landmark for sighting. Once you get there you turn right again and head for shore - directly into the slowly setting sun.

The visiblity in the water was really good - I thought the water was pretty cold (well it felt colder than the sea where we live in West Sussex) and I saw loads of jellyfish in the water. I think I probably saw about 100 of them during the swim. It’s funny as a couple of people I spoke to the following day hadn’t seen any. Maybe it’s my super clear new goggles that I’m using. Perhaps…

I got to the beach, run up the sand and along for the ‘Australian exit’ before heading back into the water. I glanced at my watch expecting to see something around 33 minutes (if I was swimming the same sort of pace as two weeks ago in France) and instead saw a number starting with 26! Well, either I’m swimming like a fish or the course is short. I suspected the latter. Either way it wasn’t the time to question what was happening - we’re all doing the same distance so I ran along the beach and back into the water for my second lap. 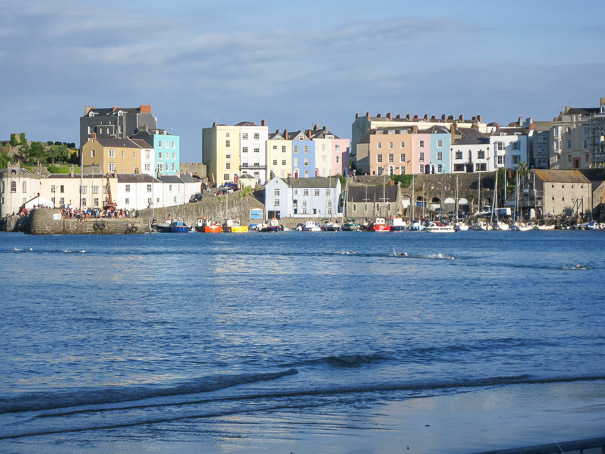 Much like in France a couple of weeks ago my (lack of) swim endurance showed itself again today - as I spent the second lap slowly being overtaken by people. I tried my best to draft off of ‘fast feet’ in front of me but I just couldn’t hang on. I swam a couple of minutes slower during my second lap and as I exited the water for the second and final time I almost found myself in a bit of a sprint for the finish line with another swimmer!

My swim time was 55 minutes exactly and I was 101st out of 841 finishers of the 2.4 mile swim. Now this time is ridiculously fast for me (based on my current fitness about 10 minutes fast I’d say). The winning time was a little over 38 minutes. After talking to a couple of different people the following day they claimed that the course was accurate and after getting home I looked at my GPS data from my watch and then drew some fancy lines using Google Earth to see what I could deduce. Well - I think we must have been swimming in a bloody great big whirlpool on Friday evening as it does seem accurate. Well - I’m not going to claim 55 minutes as a 2.4 mile swim time for me but I was happy to get out of the water sooner rather than later!

I collected my medal, a bottle of water and then we headed back to the hotel via the fish and chip shop for dinner - I needed some carbs for my long bike ride in the morning. 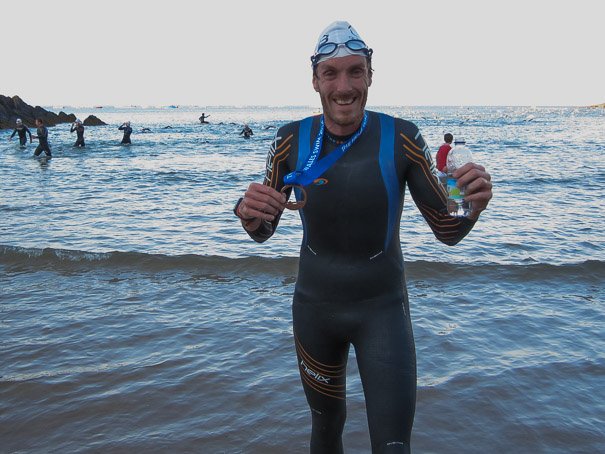 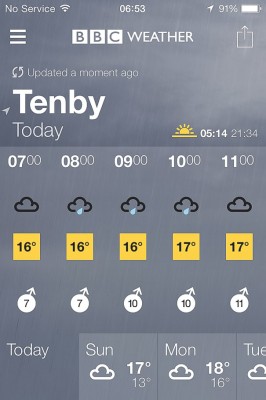 At 7:30am on Saturday morning in increasing drizzle I found myself along with quite a few hundred others stood waiting in the centre of Tenby for the start of the 112 mile Wales Sportive. Whilst waiting for the start I was asked ‘Are you David Rowe?’ - oh dear, what now! I then got chatting to a nice chap called Mark (I hope I’ve remember that right) from Kent and he’s read some of my other posts (including the Hawaii ones). I apologised for some of the embarrassing photos of me that I put online last year and then had a good old natter.

There were 70 and 42 mile options available as well (starting at later times during the day). At about 8:15am I started the ride and the rain decided to kick in good and proper as we left Tenby and headed West. 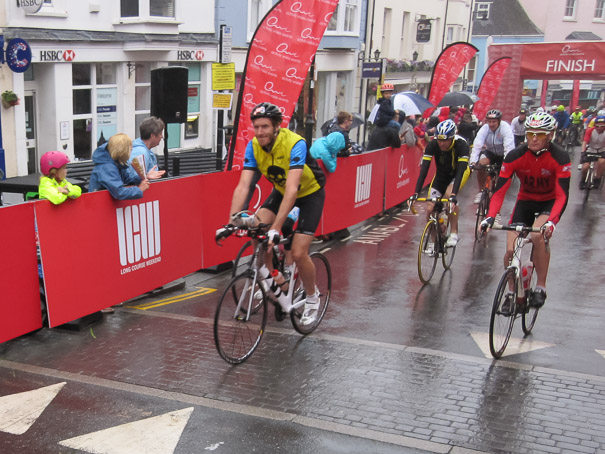 When there was a slight break in the weather the scenery was fantastic - but for the most part it was pretty bloody grim for cycling. Normally I’d refuse to go out in weather like today but as Sharon said to me - “Either you ride the 112 miles on Saturday or you can ride 260 miles back home on your own on Sunday!”

With an Ironman still in my legs from almost two weeks ago I was never planning on racing the sportive. I wanted a good steady ride but more importantly wanted to get an idea of what the course was like. You can divide it into three loops I’d say. The first loop heads West and is pretty fast, and second loop (which is for the most part repeated) seemed less scenic and much lumpier. It’s not a particularly fast course at all but and it is continually up or down with not a great deal of flat in-between. There’s a few climbs towards the end of each of the 2nd and 3rd ‘loops’ including the well known climb at Wisemans Bridge (I saw a road sign that said 16% incline) and then an amazingly supported climb in Saundersfoot, only a few miles from Tenby.

My strength was slowly being sapped as the ride went on - I did get a boost from some fantastic flapjacks (one with small bits of ‘Smarties’ chocolate in them) and an assortment of energy gels (chocolate and vanilla bean gels were my favourite) but the aid stations on the final lap only seemed to have water to hand out - far from ideal if you’re struggling in the latter stages of the ride.

At the end of the second loop as I headed through Tenby I stopped briefly to say hello to Sharon. This was also to remind me that I wasn’t racing and it was all about getting miles in my legs and getting a feel for the roads that make up the Ironman Wales course. 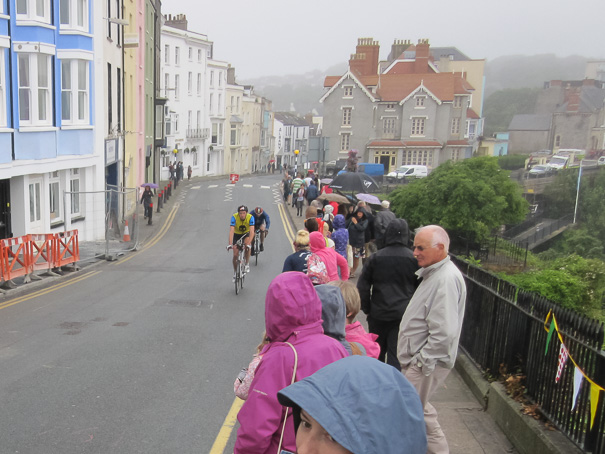 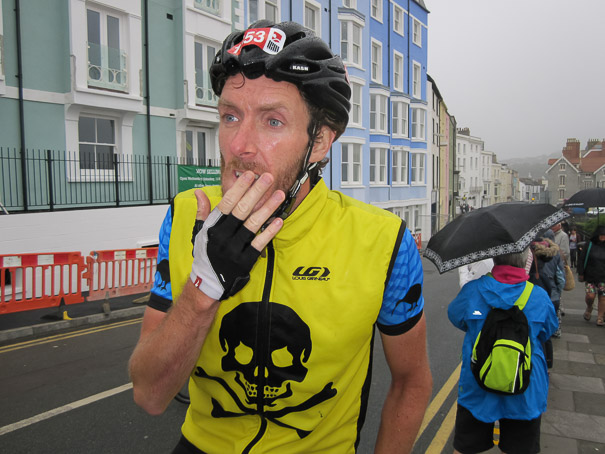 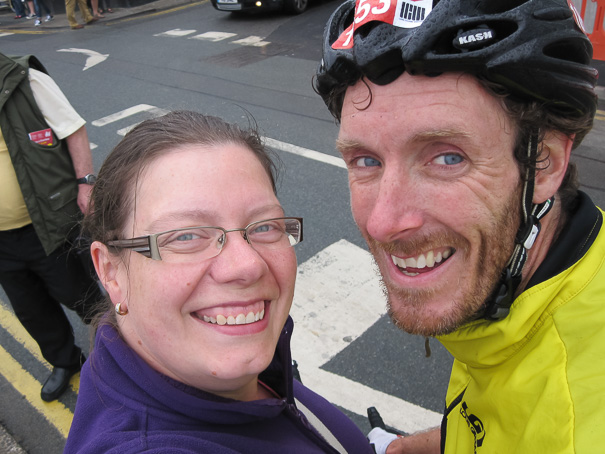 Throughout the day the rain came and went - when I say went it was more a case of just being drizzle, before coming back in force with some great big downpours. Skin is indeed waterproof - and 112 miles and over six hours in the saddle confirmed that to me but it was still a bit miserable at times - especially when everything that you’re wearing is completely soaked.

Six and a bit hours later I found myself wheeling into Tenby and to the finish line. I was presented with a medal, a bottle of water and a handful of twiglets snacks! I then met up with Sharon, took the bike back to the hotel and sat in a hot bath with a chocolate milkshake and a pasty for company! It was bloody lovely!

My bike time was 6 hours 15 minutes and this put me 54th out of 791 finishers. I did stop a couple of times (my actual riding time was 6 hours 7 minutes and 31 seconds) for food, drinks and a toilet stop but for the most part just got on with it. The sooner I finished the sooner I could get myself warm and dry. That was the main incentive to keep turning the pedals.

After a little post ride stroll around town Sharon and I met up and had a drink with Norm and Kate - two friends who were taking part in different parts of this ‘Long Course Weekend.’ It was great to see them both.

Sunday morning dawned with a leisurely stroll along the beach. The best part was knowing that I didn’t have to run a marathon (or half-marathon) this morning! Today turned into a rest day for me and after a full English breakfast we sorted ourselves out and headed on our merry little way home.

And when we got home, we went for another leisurely stroll along ‘our’ beach.