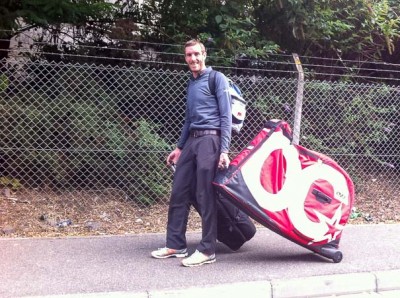 After spending the last few days trying to decide whether to take my fancy time trial bike or road bike I eventually decided for the road bike. This should be more comfortable for me over the next couple of weeks - so ‘Ruby’, my trusty Specialized Roubaix which I’ve had since early 2008 will be my friend for the next two weeks.

The bags were packed and first thing Monday morning I was on my way to Heathrow. The last part of the journey I took by tube train and after a pre-breakfast breakfast I got myself checked in and through to the boarding area for to meet up with Adam and Gary over a bite to eat.

We discussed how they managed to squeeze so much into oversized hand luggage and overweight bike bags (I chose to check another bag into the hold) and then joyously stepped onto the plane for just over nine hours of fun on the British Airways express to Vancouver.

The flight wasn’t too bad. It just went on a bit. Despite some dodgy photographs floating around on the internet I barely slept a wink. There was a mild panic when I had to fill in the compulsory customs form (normally Sharon does this kind of thing - as she does it properly) - once I’d borrowed a pen off of someone of course!

Bikes and bags arrived and the three of us headed out to be met by Dave (I should be able to remember at least one name then for the next couple of weeks) who loaded our bikes into his huge van and then sent us on the train to the hotel. We also hooked up with another ‘camper’ - Gareth - for the journey to the hotel. On arrival we had to immediately get our bikes built up as the boxes needed to get shipped to Calgary this evening. My bike was ‘built’, I shook hands and said hello to a number of strangers (including the legend that is Molina) and then got myself ready for dinner with the group at 7pm.

Bike setup (and everything else) room at the hotel

A nice civilised dinner followed by a group meeting and a few introductions. John and Scott explained a little about how the camp will run and that we get out of it whatever we want. If we want to ride easy we can ride easy, and likewise, if we want to smash ourselves with some hard biking then that’s perfectly fine. For me it’s going to be a case of taking one day at a time and enjoying it.

We’ve been told the initial plan for Tuesday which is as follows:

Once we get to Whistler we can swim/bike/run if we wish or just rest until dinner.