Today was billed as an easy day. This means that the camp minimums aren’t too bad, but there’s plenty of scope for others to tack on extra miles on the bike or do some running. The lakes round here are too cold for anything that resembles swimming so it’s just running and cycling for us today. We’re staying in Lake Louise for another night but going to another lake this morning for some fun and games.

A lie-in this morning led us to breakfast at 8am and then we set off on the bikes just after 9. A 15k (9 mile) ride up to Lake Moraine started things off. Nearly 400 meters of climbing in 9 miles (around 2.2%) meant a fairly steady climb to wake us up. It was very misty, the cloud was low and there was a lot of moisture in the air. It didn’t look like we’d be getting the views that could make this really scenic. 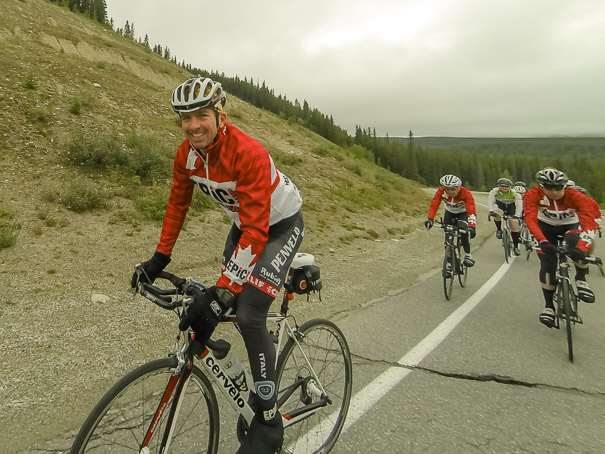 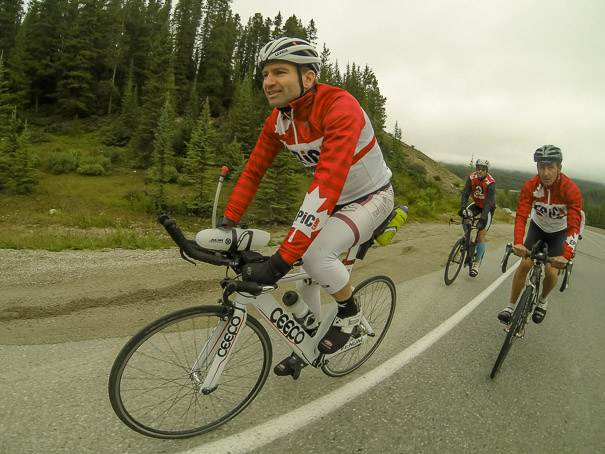 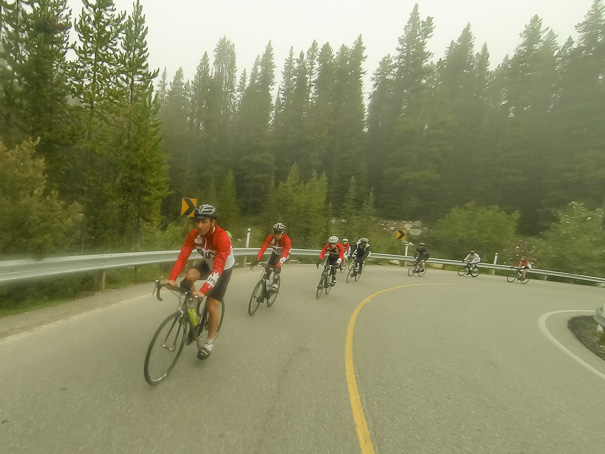 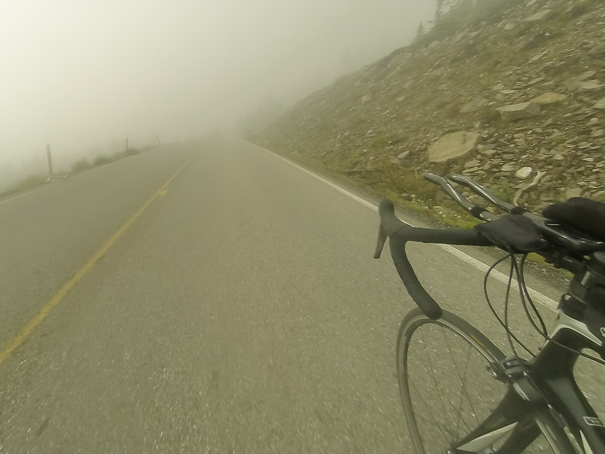 Once at the top we were met by Dave D. and the trusty U-Haul van that’s part of the support vehicles that have been looking after us the past couple of weeks. At the top he had our running kit that we’d loaded earlier and we swapped that for our bikes. 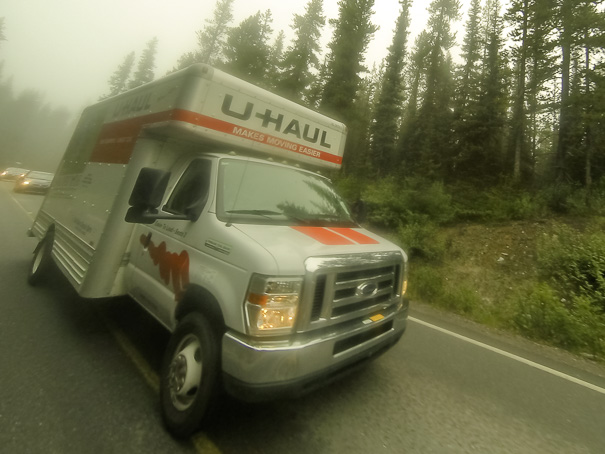 We then started a run/jog/walk/crawl/stumble along the Sentinal Pass - this would ultimately take us up to 2605 metres above sea level (8547 feet). I think this is pretty high. Before the run as we were getting changed I commented “I think the only time I’ve ever been up at this altitude is in an aeroplane.” Someone who shall not be named replied “What, you’ve never got high on crack before?” 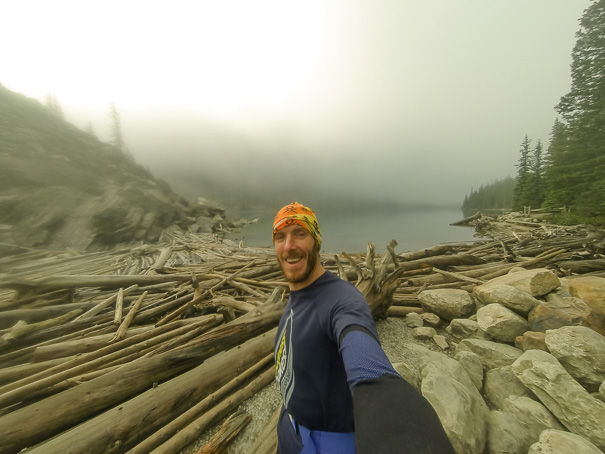 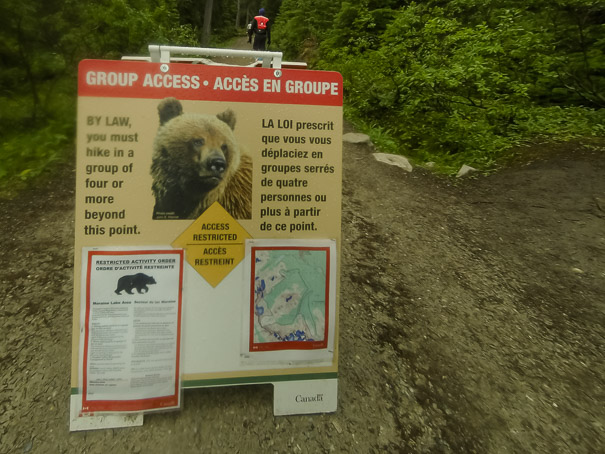 “The Sentinel Pass Trail is an alpine trail measuring 5.8 kilometres one-way with an elevation gain of about 720 metres. The Lake Louise mountain trail is considered a very difficult adventure with 3 main climbing sections on the trail with switchbacks.”

It was split into a number of different sections and boy did it climb up into the mountains. Some parts were like running uphill through forest, then open scenic parts and then later on baron exposed areas. We climbed up through the clouds and the views were spectacular. 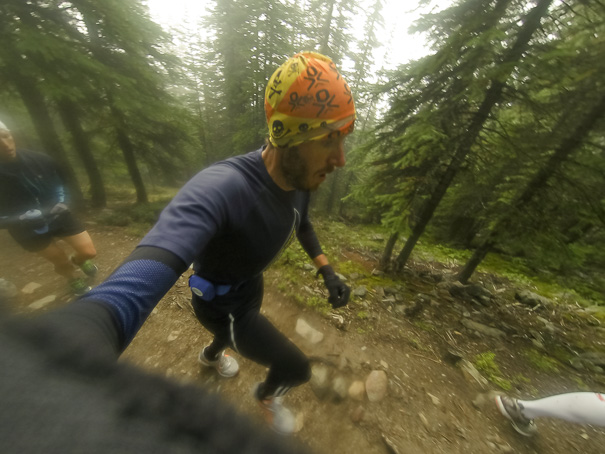 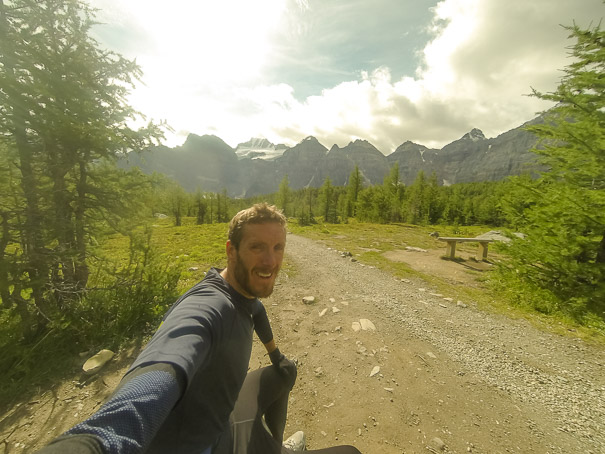 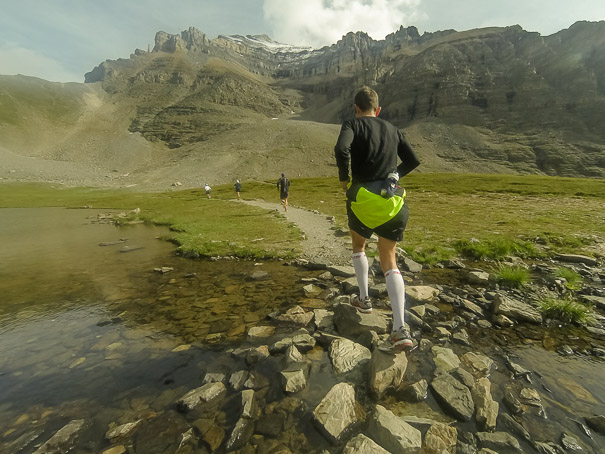 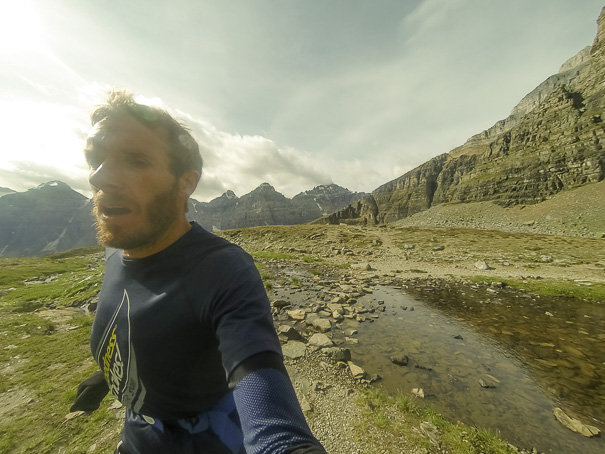 Towards the top of the pass there is a set of switchbacks on the side of the mountain. It was semi-loose gravel on a very steep mountain. Nobody hurt themselves. I’m surprised as it was pretty challenging - especially as we’re all pretty tired right now.

When we got to the top we had a few photos, and then headed down. It took me about an hour of moving time (not including some short stops) to travel the 5.8k to the top. My GPS claims it is 12.8% average incline. It was tough. The surface was pretty terrible at times too. A lot of walking took place. This ain’t ‘Epic Camp’ for nothing. 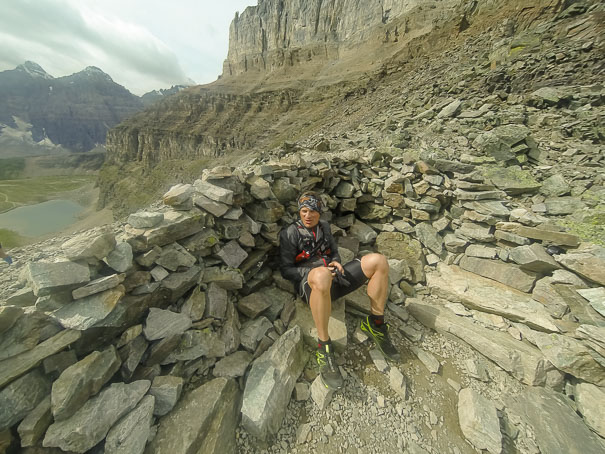 Gareth found shelter at the top 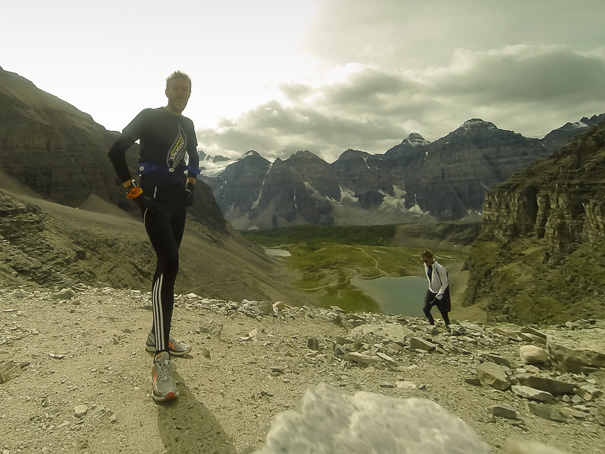 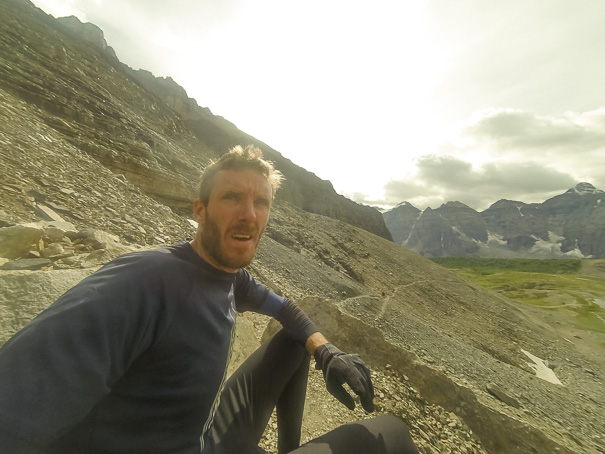 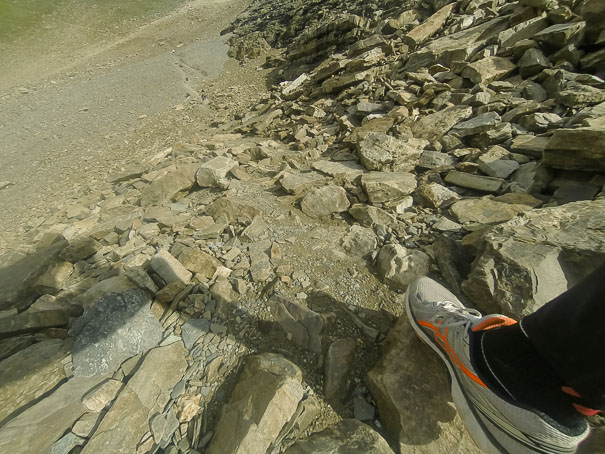 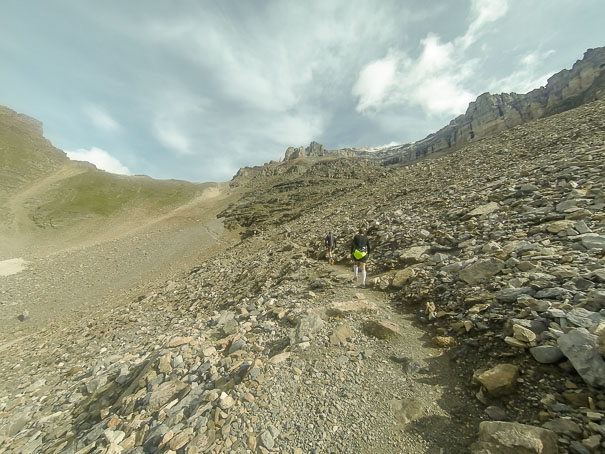 The views were amazing. Simply stunning. 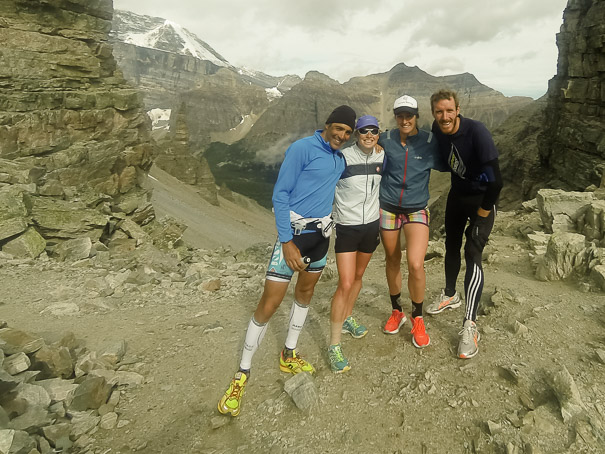 It was a little quicker to get down (44 minutes) and I only lost my footing once - so not bad going! 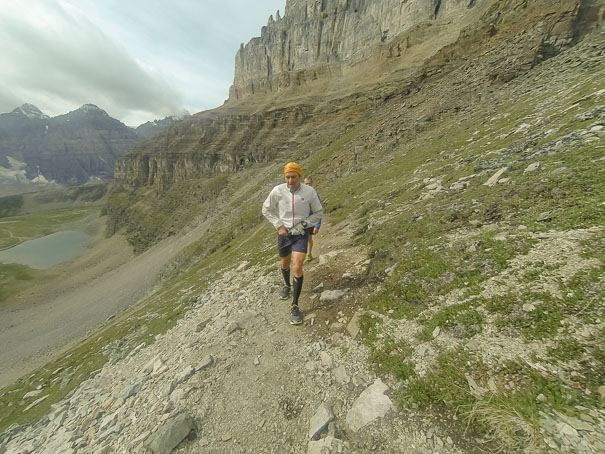 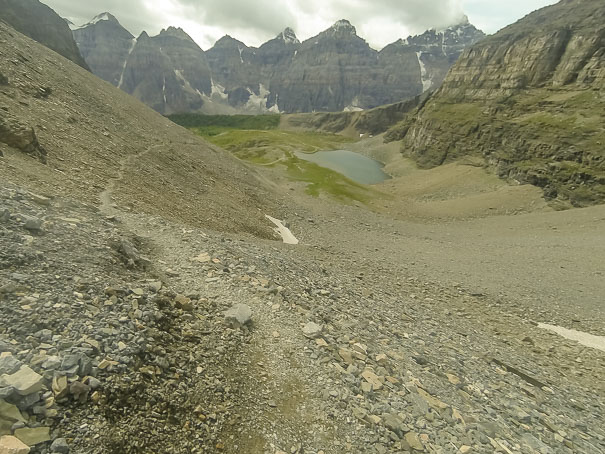 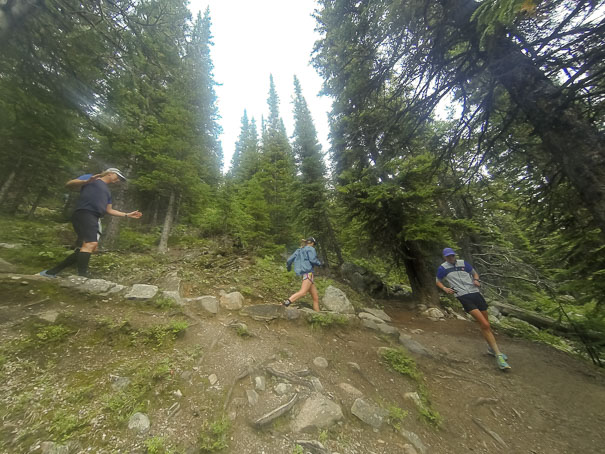 Once back at the van we got back into our bike gear and pedalled the mostly downhill road to the hotel. This was the minimum training for today. 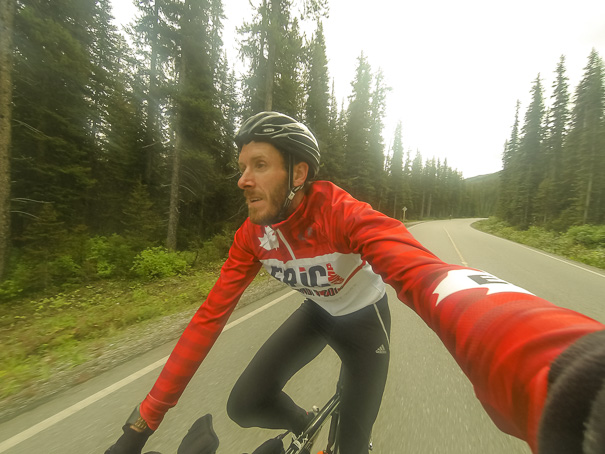 The ‘rest’ days where we stay for a couple of nights in a location seem to be the ones that kill me. I’m absolutely shattered today and could easily fall asleep given a bit of peace. I probably should sleep but we’re always finding something to do. I can sleep next week.

Now, as a little aside, before we set off on our bikes (post run) for the ride back to the hotel this morning I said to Louis, “Are you going to be doing a little extra tacking on today?” (he’s currently tied for the Over 45’s points prize) to which he replied “Why does everyone think I’m tacking on?” At lunchtime I saw him sat his in training gear and said “I see you’re still in your kit.” He just gave his shy little look and chuckled a little to himself. 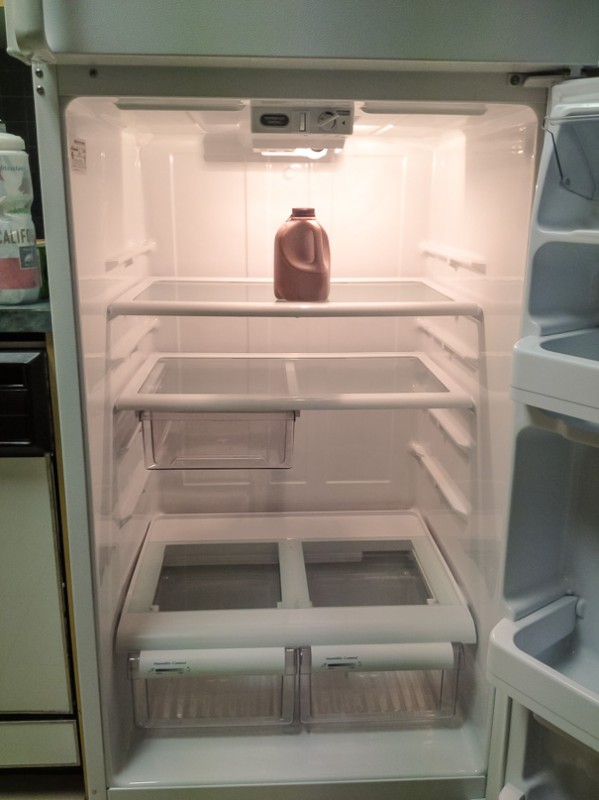 The fridge in our room contains all the essentials

Take this afternoon, a group of us (who chose not to ‘tack on’ extra training) took a ski-lift up a mountain to look for grizzly bears. We saw one. We were also treated to some amazing views. Scott chose not to join us on a bear hunt. Just after lunch he told us that because you’re not allowed to take glass (i.e., beer bottles) into the hotel spa and hot tub he’d put his into a plastic bicycle drinks bottle.

“If you need me, you know where to find me.”

Also of note this afternoon was Phil’s shocked face when he saw me eat a Mars bar in two bites. Seemed perfectly normal to me! 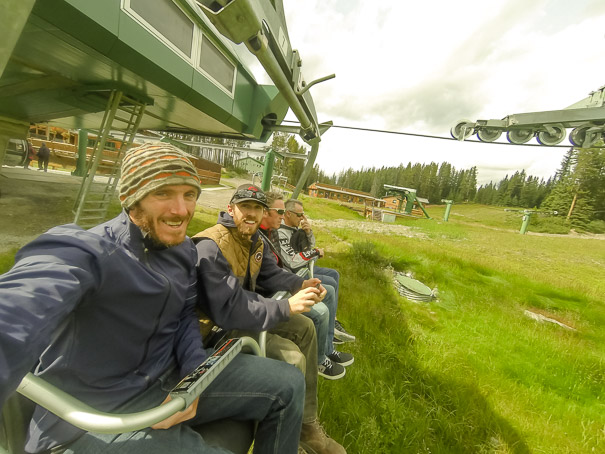 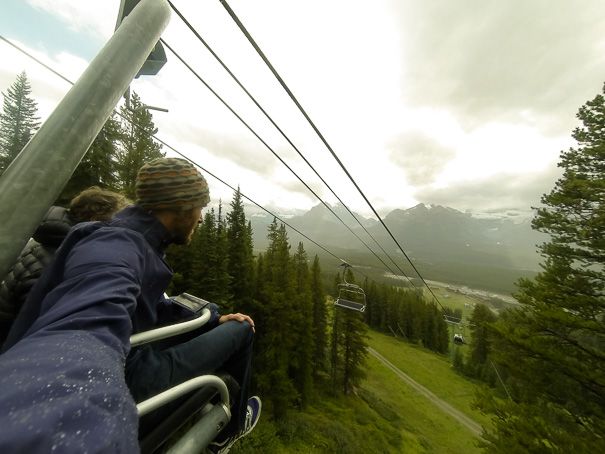 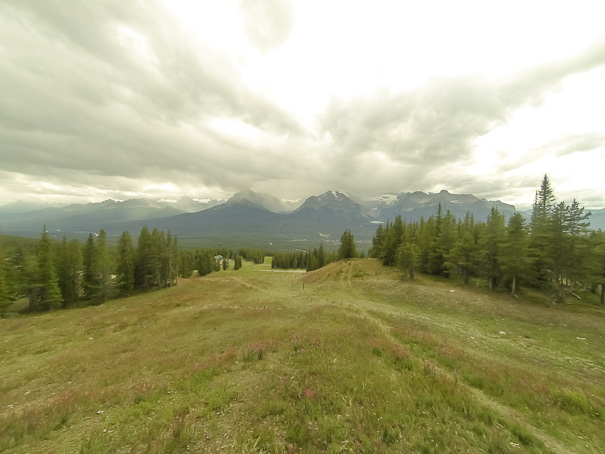 Although we’ve now been in Lake Louise for over 24 hours I’ve still not seen the lake. We’ve been assured that we will tomorrow (Saturday) - starting with a hilly run at 6:45am. What joy! Shouldn’t be too many tourists around though. 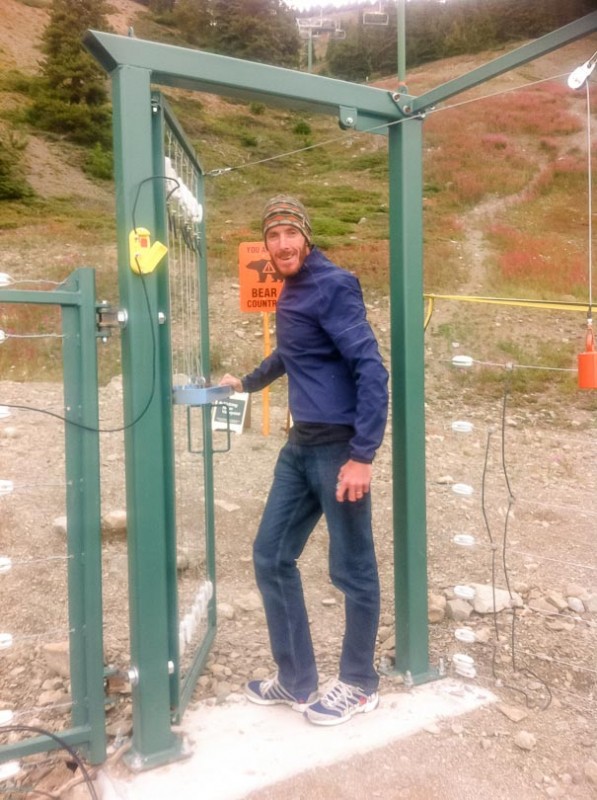 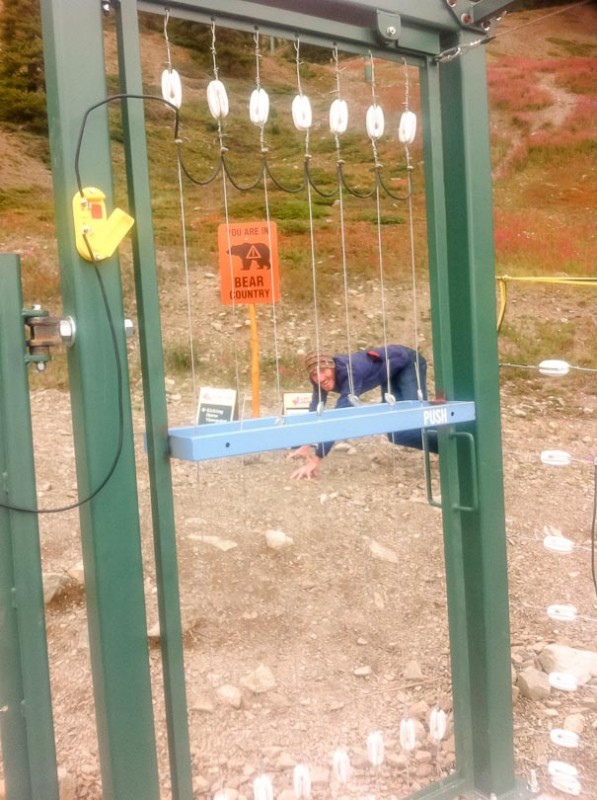 As we met up for dinner this evening I saw Louis and asked him if he did much this afternoon. He replied “Just doing some stuff. Keeping busy.” I found out later that he swam 1k in the 15m hotel pool and went for a run.

Dinner was Elk Burger followed by ice cream from a shop at the mall over the road. My perfect dinner.

Please note that Saturdays blog will probably be a little delayed as it’s the final day of Epic Camp and as soon as we make it to Calgary we’ll be having a couple of beers and falling asleep very quickly. I’ll try and get something online on Sunday night (UK time) and there’ll no doubt be a bit of a rambling post sometime after I get back to England.

It’s been an amazing camp. It’s strange that this time tomorrow we’ll have completed our camp and will be relaxing with no training planned for Sunday. I’ve met a fantastic group of people and after living in each others pockets for 24 hours a day for almost two weeks it’ll be really strange for it to stop in an instant. I’m really looking forward to going home and can’t wait to see Sharon, relax at home and take a walk along the sea front and down to the pub for a pint with Dad on Monday evening. It’ll probably just feel a little odd.