As last nights thunderstorm rolled through we woke up to a bit of drizzle. This open water lake swimming that I’ve been doing has given me a bit of a nasal infection (I’ve had it before a few times) so I’ve just started on some antibiotics. It’ll be cleared up no doubt by the time I get home. The box also says no alcohol to be taken at the same time. OK then…. ;) 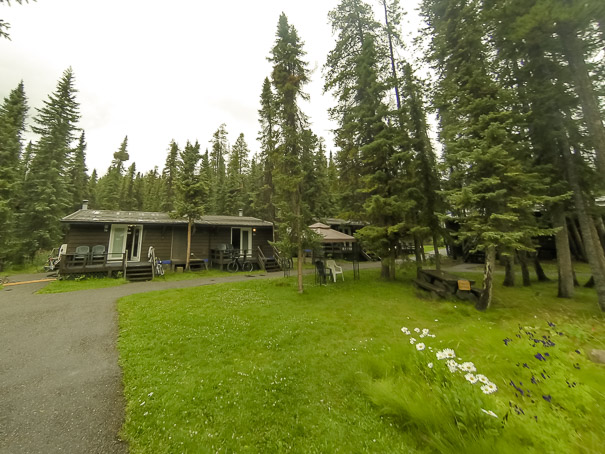 We stayed in these little cabins on Wednesday night

At 7am the group met in the car park for a just under 4k (2.5 mile) run to Honeymoon Lake. I can only assume it’s called that because a couple of polar bears went there on honeymoon - as the water temperature would be right up their street! A few camper vans were parked up by the lake so we had to be quiet as we got into our wetsuits and stepped into the water. 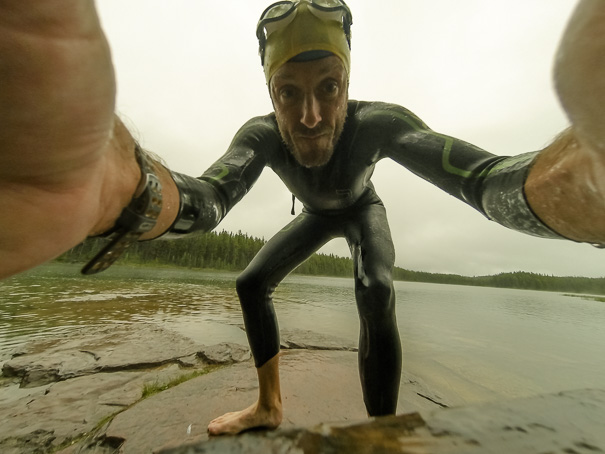 The creature from the deep!

John was first in and when the boss talks we all listen. He said something along the lines of “Swim 3k if you can, but if you get hypothermia then you can cut it short!”

It was fresh - bloody fresh in that lake. The water had all sorts of algae and stuff floating around in it and I had a right coughing fit after accidentally swallowing a mouthful. Not very pleasant. I followed the group for an anticlockwise lap of the lake and when we returned to the starting point I saw two or three swimmers had got out. My feet were numb, it was not fun. I remember at one point I stopped for a breather with Scott and Louis swam up beside us (for once wearing a full armed wetsuit - he’s been wearing a sleeveless one until today!) and just said “lets get it on bitches” and swam off. He just wanted to get it done. 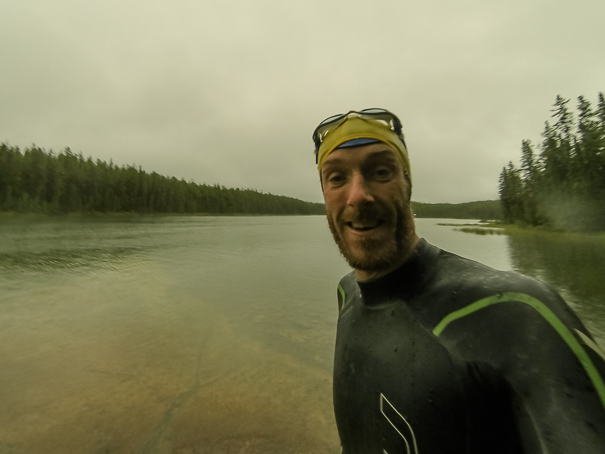 I decided to get out after 30 minutes (about 1.8k or so I’d guess) whilst a few others carried on. It was raining at this point and getting changed took quite a while as I was shivering in the cold. The run back was cold and my feet were numb and painful the whole way back to the hotel. This wasn’t a great start to a long day.

Back at the ‘ranch’ I got my bags packed and loaded onto the van. Doing this (loading your bags onto the van) earns you the right to have breakfast. If you try and have breakfast beforehand then points can (and will) be docked!

We set off at about 10am for the 177km (110 mile) ride to Lake Louise. We were told it might be cold. The following is what Wikipedia says about the temperature of the place:

“Lake Louise experiences a subarctic climate. Annual snowfall averages 3.3m and winter temperatures below -50°C have been recorded. Summers consist of frosty mornings and crisp, cool days. Snow can occur in any month of the year.”

Today’s ride would include cycling over a couple of rather large ‘lumps’, which would be contested for KOM points. The first one was at about 54k and the second at about 134km (where lunch would be served). After I had a good little result in yesterdays climb (and nice to get a namecheck in the blogs from Scott, Petro and Adam) I thought I might see how my legs would behave on the first of todays climbs. The only trouble today is that it (the climb) didn’t start very close to the start of the ride like yesterday. I expected the pace to slowly rise as we headed to the mountain and today did not disappoint! 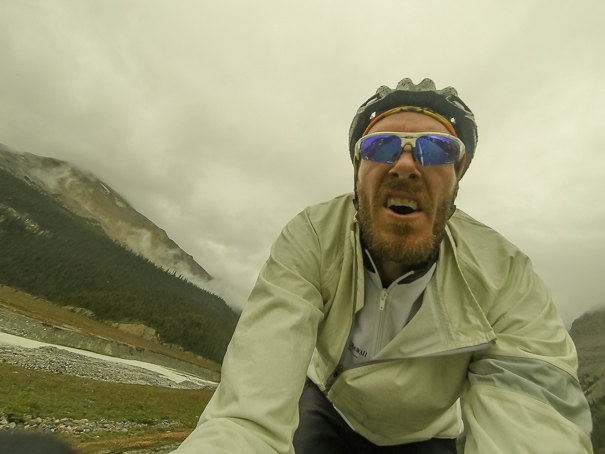 After a leisurely start we’d only gone about 7 or 8k when John N. hit the front hard. John B. jumped on his tail shortly followed by Zach (who’s won every climb so far). Groups started to appear and I jumped on in for the ride. I say ride, when it was really a bit of a crazy smash fest. I’m pushing harder on the flats to stick with the group than I was expecting to push on the climb. On a 170+ kilometer ride it’s not good to blow yourself to pieces in the first 20k. Never mind.

It was absolutely pissing with rain. There was a group of say eight or nine of us and we could hardly see ahead of us. The pace was pretty frantic. I’m not sure it was fun. At one point I found myself beside Shannon and said “Is this meant to be fun?” to which she replied “Yes, this is fun!”

OK, fair enough. I was blowing from all my gaskets at 20k into the ride - the climb didn’t even start until 38k and then it was a steep first part, a little descent and flat and then a gentle climb to the summit at 54k. Even if I managed to get to the end of this climb intact I still would have another 123k (76 miles) or so to crawl home!

There were one or two attempts of breakaways before the climb and we had to work to pull it all together. But by the start of the climb there were about eight of us together. Just like yesterday I did my own thing and pushed. I feltsurprisinglyOK although I had just had an energy gel a few minutesbefore and been knocking back drink whenever possible.

I had a great climb and slowly passed a number of the usual suspects. I remember passing Charlsey half way up a climb and he gave me some awesome support. Thanks mate. He wasn’t racing and had set off on the ride some time before us this morning, just going at his own pace. I eventually got to the top and crossed the imaginary line (Marks van) in third place. That’s one better than yesterday - and after quite a little bit of ‘fun’ in the rain on the way. I was really happy. 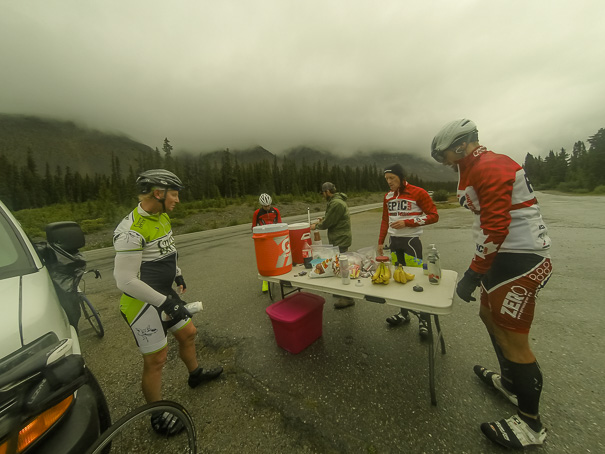 The aid station at the top of the climb

Now, going back a couple of weeks - before I left for Canada I packed in my bag some Mars bars and Snickers bars. I think I ate a mars bar soon after arriving in Vancouver and haven’t touched the rest. Today I put a snickers in my back pocket to have as a treat at the top of the climb - whilst everyone else is scrambling around for whatever is available.

Well, would you bloody believe it - I get to the top and on the table is a box of 48 Snickers bars. I’ve just carried one half way round the world to treat myself at the top of a hill and there’s a pile there already! Dammit. 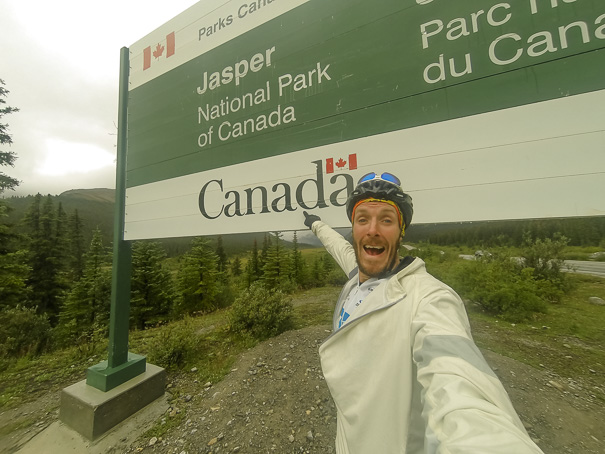 I told you I was in Canada. Now do you believe me?

I had my snickers, some hot soup that was there and shivered for a few minutes. Then we set off as the plan was for everyone to regroup at 100k before the next KOM climb.

I was absolutely soaked to the skin and the descent was freezing. It was cold, wet, windy and raining. Oh, and all my clothes were wet from a combination of sweat and rain. 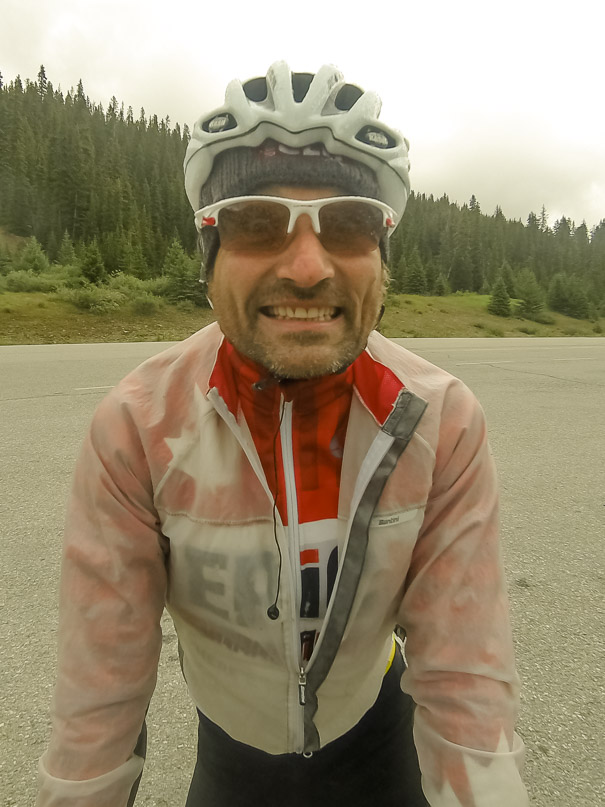 Adam B, the current points leader going into the final couple of days of training

A group of us pushed on and got to the 100k point to regroup. We stopped at one points as Petro had lost a contact lens (from his ‘good eye’). He got a spare from his saddle bag and then used my mirrored glasses as, er, a mirror.

Once we got to 100k because we were all so cold and wet John asked if people want to cancel the second KOM and roll on without waiting for everyone to regroup. There were mixed answers but Shannon and myself were ready to just head off and get to Lake Louise as quick as possible. We set off knowing that we wouldn’t be able to get points on the climb. It didn’t matter. The rest hung around and some bought overpriced coffee whilst waiting to regroup with the rest of the riders.

Apart from the rain and cold we had a great ride. I was freezing (although did change from my ‘rain’ jacket to my winter one at 100k - both were Rapha ‘wanker jackets’ though!). What I couldn’t believe was that Shannon and her husband Charlsey were riding in shorts. I think because they live in Brisbane they don’t own any winter cycling gear. Either that or they’re fucking nuts. I’ve no idea how they were able to ride today. Chapeau. 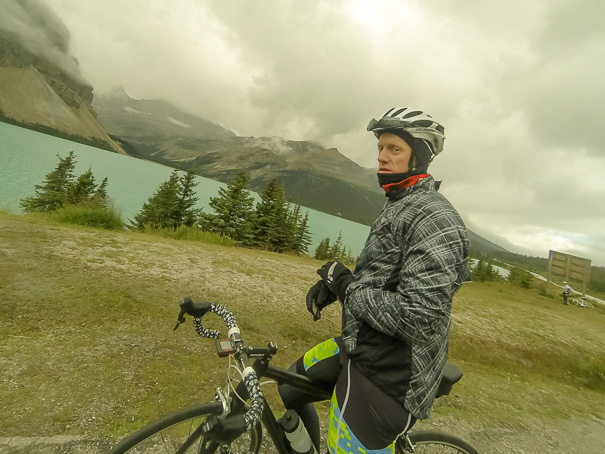 Zach, and a mountain, and a lake

The views on todays ride were pretty awesome. We cycled past glaciers, lakes, a campsite called (Mosquito Campsite) - er, I’d rather not stay there and I saw a couple of waterfalls. The cloud was very low and visibility at times wasn’t great but we did see some great sights on the Icefields Parkway - which according to the website is ‘The Most Spectacular Journey In The World!’ 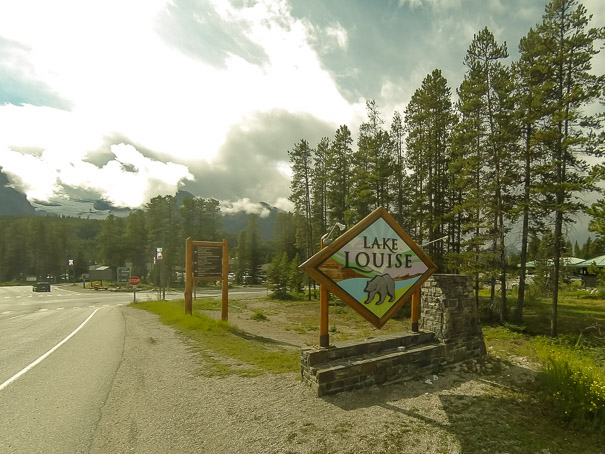 We arrived at a hotel/inn at Lake Louise just after 4pm after 110 miles of riding. Another six hours in the saddle and just under seven hours of exercise today. 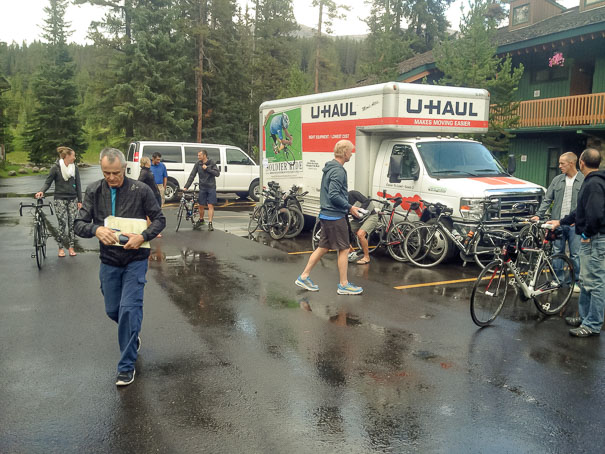 Walking our bikes to dinner. They didn’t eat with us - they stayed in a storage room in the main hotel block

Dinner was a superb buffet at the hotel followed by a walk into the village for ice cream. I bought ice cream, Adam bought beer and Scott went for a little tipple as he does. The man is a legend and it’s been aprivilegeto spend time in his company. 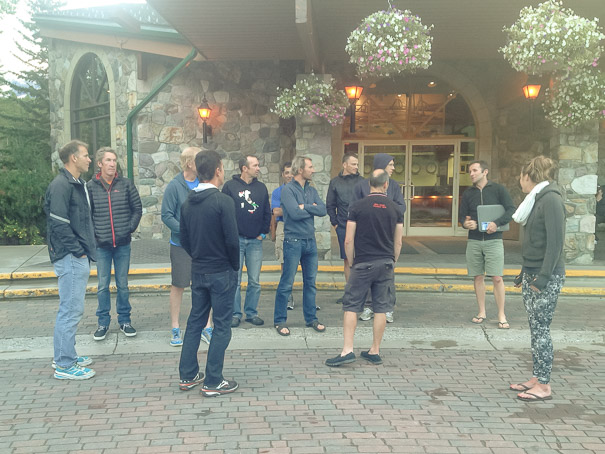 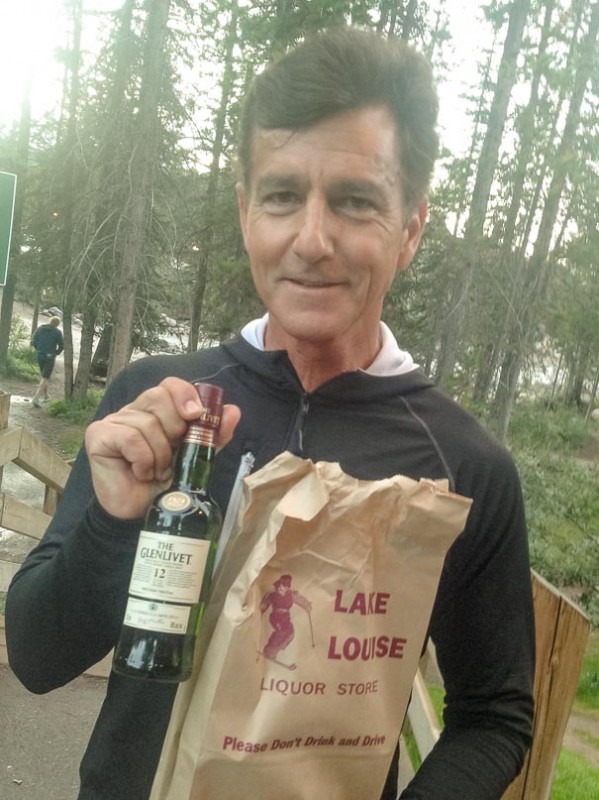 Friday is going to be a more relaxing day for those who want to do the minimums, a little cycle, a trail run and no swimming as the lake is too bloody cold. 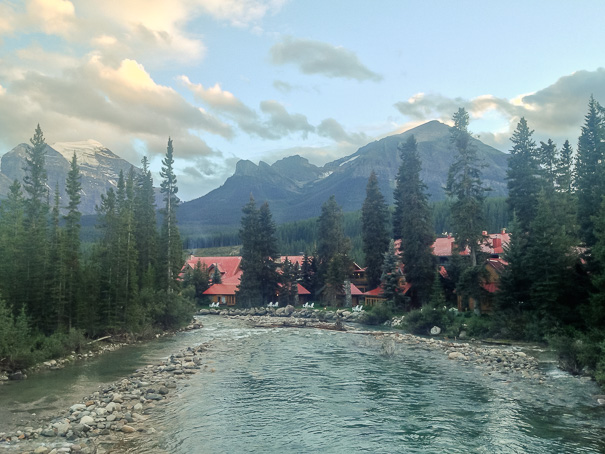