Tuesday night I was shattered. I was in bed by 8:15pm and asleep by 9. I woke up just before 5am so lazed around for about an hour before getting up at 6. Sorted myself out and then down with my bike shortly after 6:30am for the early activities. A pre-breakfast of toast and honey followed by a honey sandwich set me up!

We all rolled out and headed towards a place called Rainbow Park, situated right on the lake. We cycled straight past the entrance to the lake area and only decided we’d missed it after climbing about 750m up a steep(ish) hill! We rolled back to the lake, got ourselves into our wetsuits and prepared for the mini aquathlon (swim/run) race. 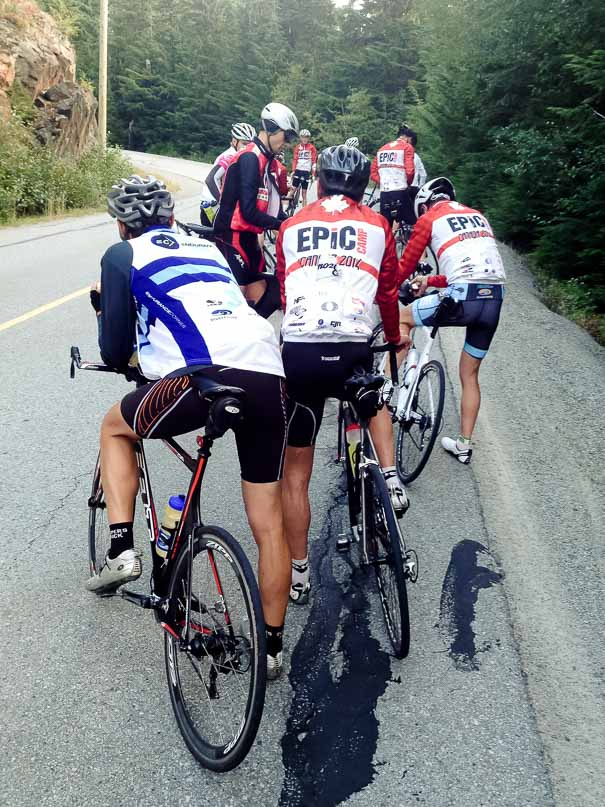 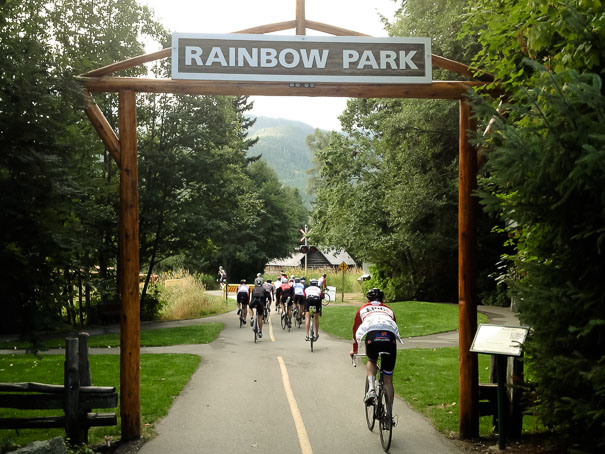 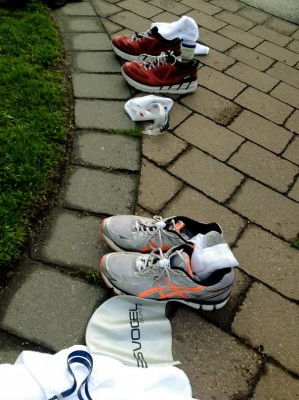 I prepared my transition area carefully. What better place to position yourself than right next to 1988 Ironman Hawaii winner (and I mean overall winner, not age group, overall, yes, did I say it, overall) Scott ‘The Terminator’ Molina! Perhaps a bit of his awesomeness would rub off on me. I did realise that there was no point looking for his red running shoes when I entered transition after the swim as he’d no doubt be up the road by then and all what would be left behind would be his wetsuit. Never mind.

We all made our way to the water. A make-shift course was chosen (swim out to the two moored yachts in the middle of the lake and then swim back). There was no time for a swim warm up and before long we were off. I thought I started pretty well. This unfortunately didn’t last long as I then started to get what seemed to be a bit of a panic attack. This is ridiculous. There’s only 19 of us in the bloody water. Ironman France a few weeks agohad around 2000! I think my wetsuit wasn’t pulled up enough and was restricting me a little. At least that’s the excuse I’m going for.

Gary and Adam sailed past me (well, swam) and after sorting myself out I carried on swimming and settled into a steady pace. Heading back to shore was interesting. I was sat on someones feet (I think it was Phil) and he was following Gary. This is Gary who can’t swim a clockwise course for toffee and is known to drift left. Lets just say he drifted left. I noticed this a little earlier than he did so was able to get to the beach not too far behind them.

As expected my running shoes were sat next to Scotts wetsuit. I got into my shoes and headed off for the 6km run - a small cone was put 1km along a beautiful little path. We’d run to the cone, run back and do this three times in total.

My run was uneventful. I like it that way. I ticked off a 6k run in just under 26 minutes and finished close to the back of the pack. Scotts run was more eventful. He tripped over his newly installed elastic laces and had what I understand to be a right tumble. He’ll no doubt write about this in his blog at some point. 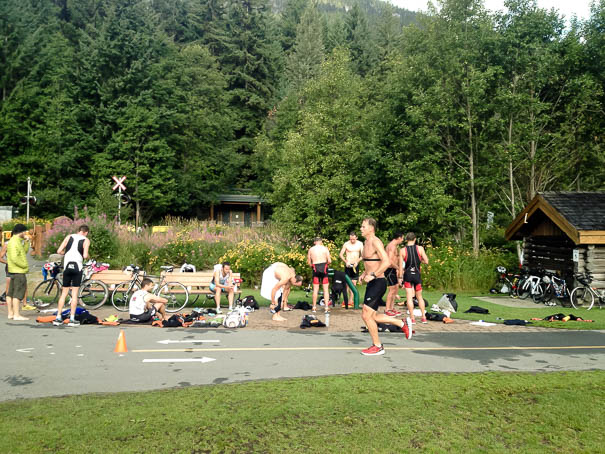 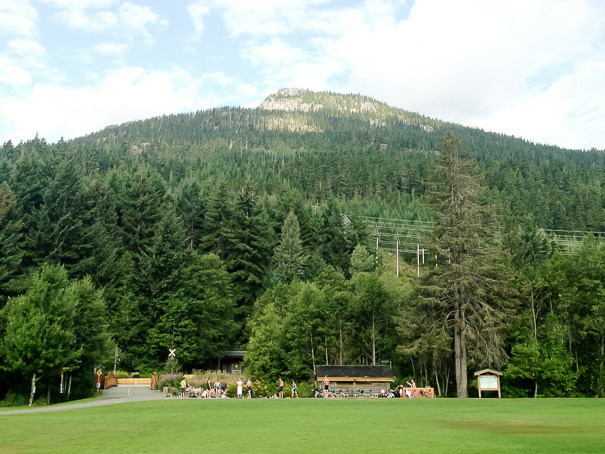 Post race we headed back to the accommodation, packed our bags and headed down for proper breakfast. A big (well, two) bowls of porridge with honey and nutella was the first course followed by scrambled egg on toast. That would hopefully set me up for todays ride to Lillooet.

At this point I’m probably going to give distances in kilometers - mainly because that’s what the signs over here say and that’s what the locals talk! For me it’s a nice change as they pass by quicker than miles. The only downside is that there’s more of them! 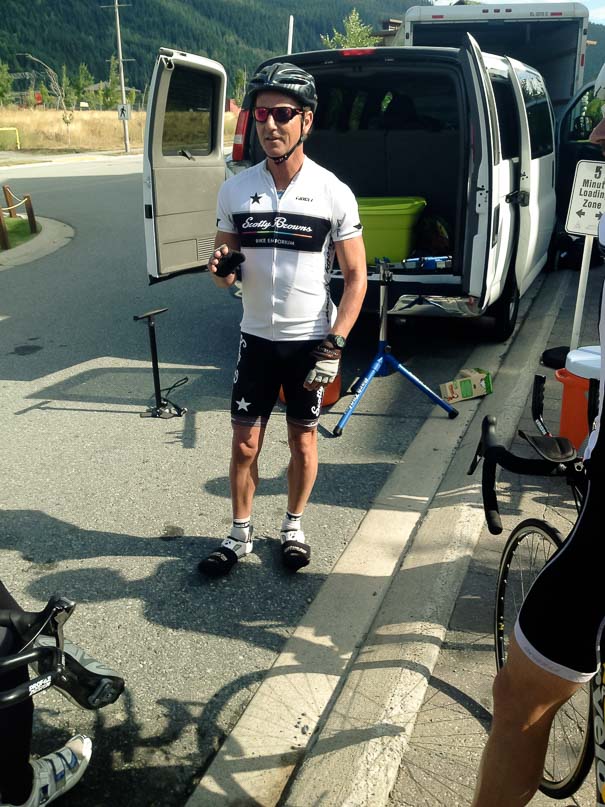 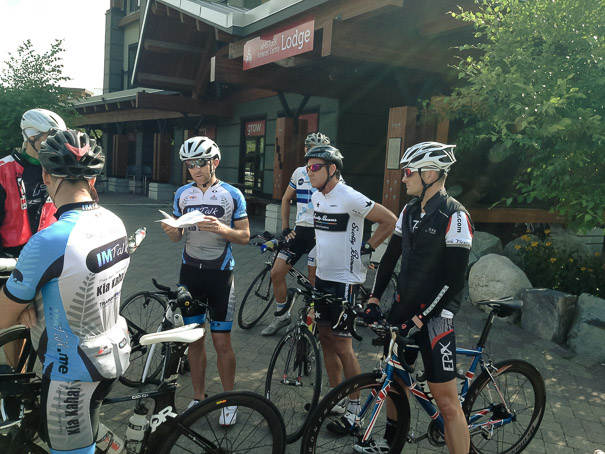 The ride started with a steady effort to the first aid station at about 52k. We got there, filled our bottles, shed any additional layers of clothes and prepared for the first main climb of about 13km (about 8.3 miles) averaging I believe 6 or 7%. This was where the first set of KOM (King Of the Mountain) points would be on offer. This was of course only of interest to the fast boys. 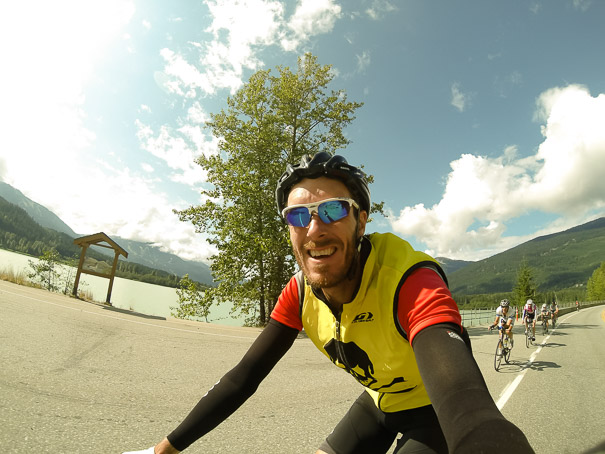 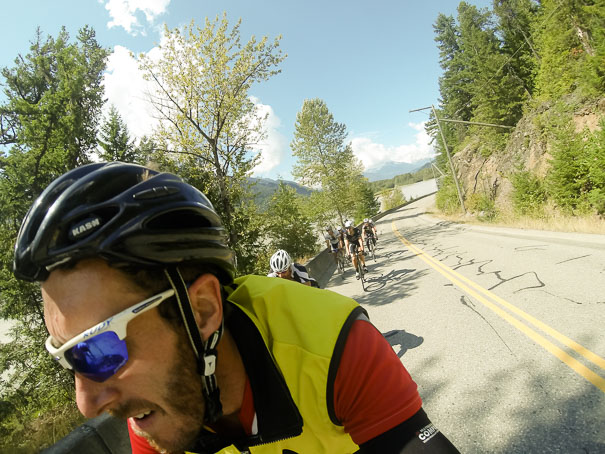 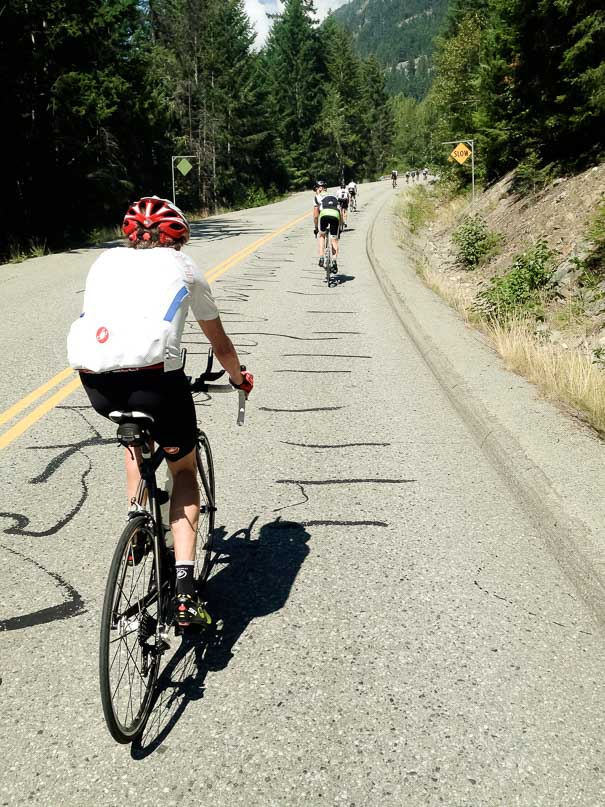 Early on in the climb. I slowly watched as almost everyone head off up the road into the distance

I started off slow, got slower but eventually found myself at the top after about 1 hour 15 of solid climbing. I overtook a couple of people on the way up (mainly because they were having a hard time of it having gone off a little quick) and once at the top I filled up my bottles, had a few crisps and cashew nuts, found some caffeine filled salt tablets and a pint or so of coke! We were only half way into the ride and had another 70k or so to go, but there was the promise of a lot of downhill.

I grouped up with Phil and Leah and we set off at a ‘gentle to steady’ pace. No heroics today for any of us. 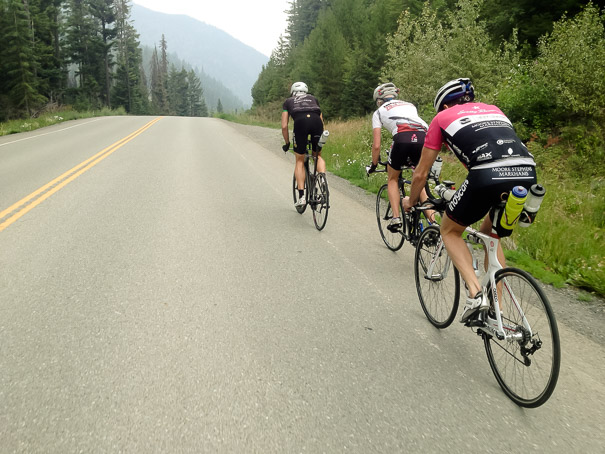 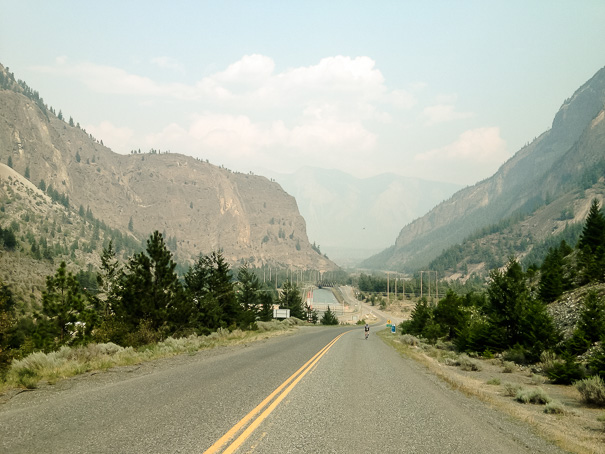 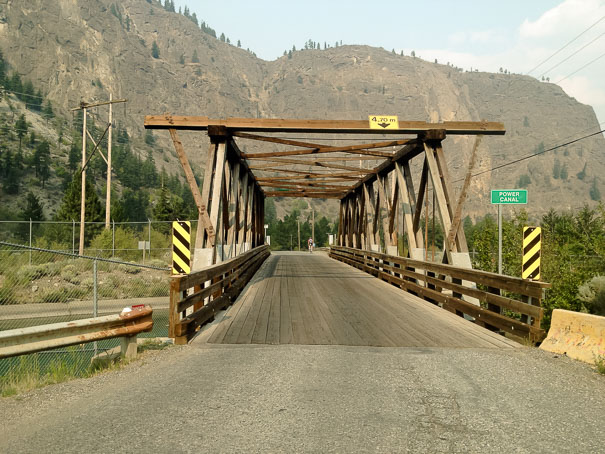 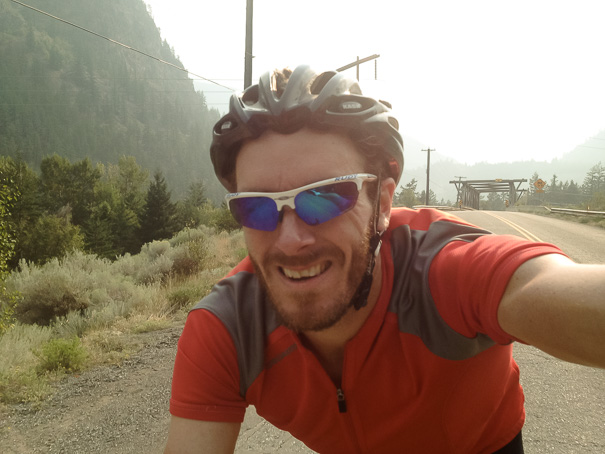 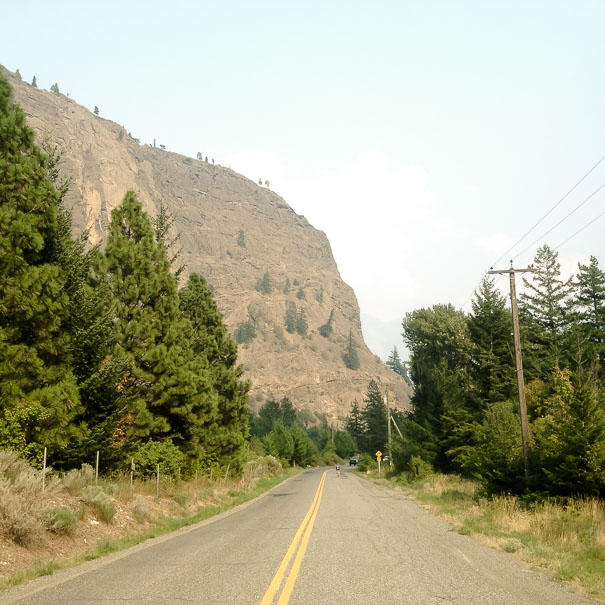 We had a good ride from here on and managed to pull in a straggler and then three became four. The group of us kept on pedalling and eventually after 140km (87 miles) we made it into town. On arrival we dropped our bikes off in the local video store - yes, we just parked our bikes in the middle of the shop up against the shelves of DVD’s. I thought video rental stores were a thing of the past but clearly not, although they do seem to double up as bike storage rooms now it seems! 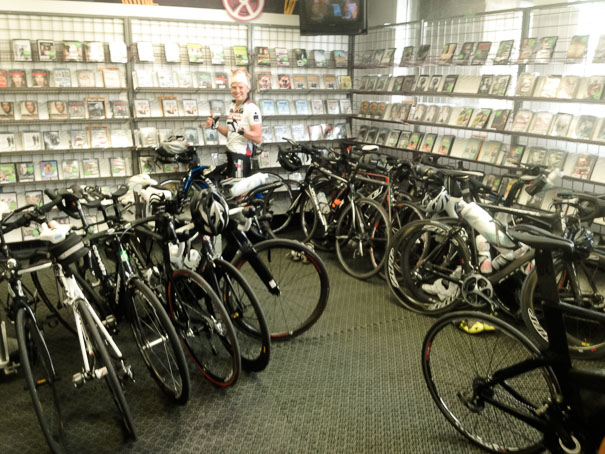 I headed back outside to a post ride feast and then got myself checked in (I’m sharing with Adam K. tonight) and freshened up before dinner at at a local restaurant. Just before I checked into the hotel/motel (or whatever this place is) Gary decided to go out on the bike to get some extra miles in so he could earn an extra point. He’s loving the competitive nature of this. I think he just wants to finish the camp with one more point than Adam. Here’s a photo of Gary about to head out with Scott looking on in the background. 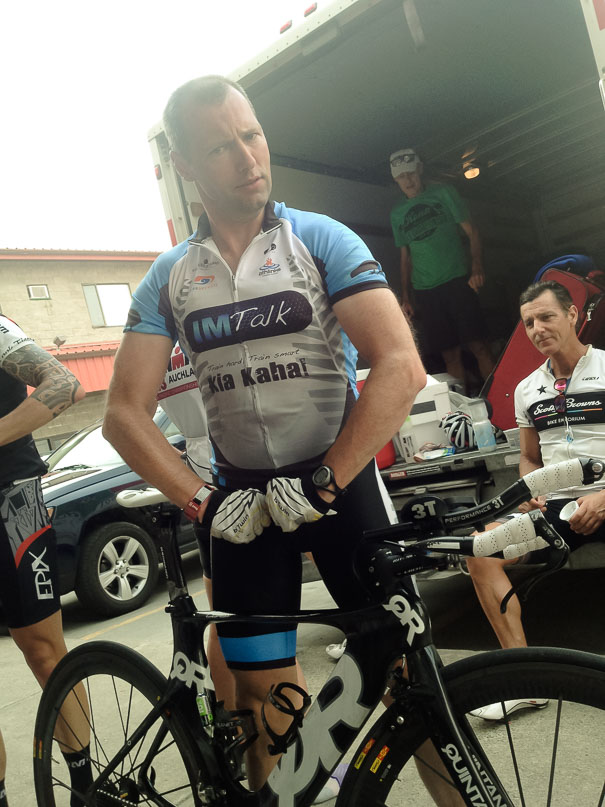 Gary heading out for a few extra miles

Todays riding (including riding to/from the lake first thing) totalled just over 160km, which is real money is just under 100 miles. Just over 6 hours 50 minutes of ‘out cycling’ time (including aid station stops) but 6 hours 4 minutes of actual pedalling. With yesterdays 4:13 of cycling we’re over 10 hours of pedalling in two days (and almost 175 miles). That’s way more than I do in a week back home. And a good week at that.

As I write this blog now (just before 6pm on Wednesday evening) I don’t feel as broken as I did yesterday. I think that if I play it sensibly, hang back and just get the miles in I may just make it through the cycling part of this camp. The swimming is more of an unknown as my shoulders will probably snap in a few days time from their over exertion and the running should (hopefully) be fine.

Two days in and I think I’m enjoying it here on Epic Camp! The scenery today was absolutely amazing. I did have plenty of time to enjoy it! It’s a bit like the west coast of the south island of New Zealand, but so far without the rain they get there for about 360 days of the year!