In June 2006 I went along to Bushy Park in south-west London and ran 5k. It was at a little free to run event called the Bushy Park Time Trial. A month or so later I’d got the running bug for sure so set up this blog to record what I’d been up to. Since then the Bushy Park Time Trial has changed massively. It became parkrun - and parkrun is taking over parks and open spaces around the world and it’s founder - Paul Sinton-Hewitt - was awarded a CBE in the Queens Birthday Honours this week. Sharon and I were fortunate to spend Thursday evening (the day of his investiture) celebrating with Paul, his family and a number of close friends. It was lovely and we’re so pleased for him.

Now although we have a lovely parkrun close to where we now live we decided that as it was the 10th anniversary of parkrun we’d go up to our old haunt of Bushy Park for a celebration. We’ve not ran at Bushy for about five months or so and there’s a lot of people who we’ve not seen so it would be a celebration of parkrun and a great catchup with friends.

It failed to disappoint on both counts. Over 1,700 people took part in the run (just slightly more than the previous record of 1,184 from January of this year) and it was amazing. The original 13 runners (and volunteers) from October 2004 were there to be celebrated and after the annual points competition prize-giving we were off.

The park was busy and the run was fun. The weather was ideal (until about 10:15am when the rain started) and after the run there was endless conversation, consumption of celebratory drinks and of course cake. We then retired to the cafe for more food and drink before Sharon and I headed home. We left home at 6:25am and got back at 3:30pm. That’s a record for a 5k run I’d say! 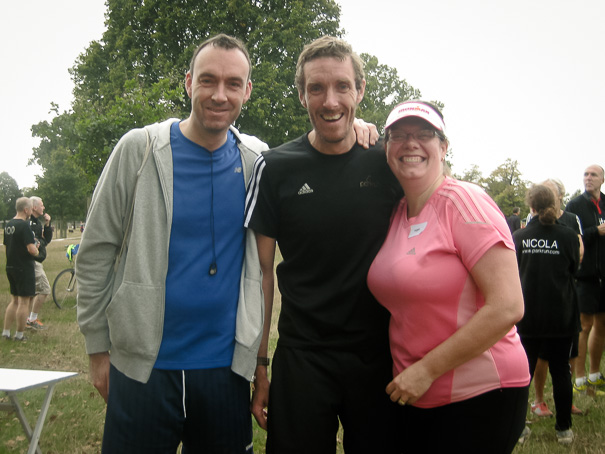