I’ve always said this is my favourite 10k race and had an unbroken streak between 2004 and 2012. In 2013 I had just finished Ironman Lanzarote the previous day and last year I chose not to run as I’d hurt my foot and with Ironman France only weeks away I sensibly chose not to race. This year I’d been working on the excuse about my dodgy left ankle - that’s been hurting since November. The latest on that is that I saw the doctor a couple of days ago and I’m going to be referred for an MRI scan.

He didn’t say anything about not running. Excellent.

I ran parkrun on Saturday (first run since parkrun the week before) in 22:18 and thought that if I could somehow double that I run about 45 minutes in the 10k that would be a great result. The weather was beautiful so Sharon and I cycled to the start (nice having a race two miles from home). After a little pre-race faff I got lined up for the start - and chose to be sensible and stand in the correct place based on time (at the back of the 40-44 minute group). 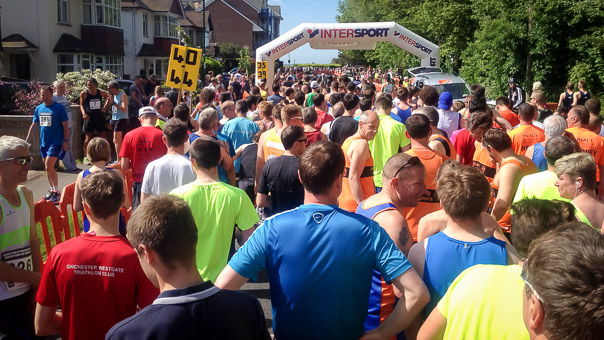 My legs were aching from Saturdays run but I’m sure a little mental toughness would sort that out.

The starting signal went and we were off. I just had to run just over 7 minutes per mile and tick them off one by one. So I did.

Seeing friends and family around the course was great. This is one of the reasons I love this race - as the support I get is fantastic. I ran the first 5k very close to Keith - who’s the head coach of the local running club and was running today for the 20th time! Well.. he knows bloody everyone. There were endless shouts of his name. Endless I tell you!

A sea breeze was starting to take shape so this means you get a little tailwind to the 5.5k mark and then it’s a headwind along the promenade all the way back. Lovely.

At the end of Limmer Lane by the ‘turn for home’ there’s an aid station. I hadn’t planned to have any water but saw Richard M. there (his wife organises the aid station each year) so thought I’d make use of the water services on offer. I took a sip from the cup and then poured it over me.

10 seconds later I was up on the promenade fighting into a cool headwind wearing a soaking wet top. Not my greatest move!

With an increasing headwind I chose to leapfrog my way up the field by sitting close behind people (let them fight the wind and not me) and then move up. It seemed to work.

Before long the crowds were getting noisier and noisier and it was the last few hundred metres before the finish. As I took the final turn I felt someone coming close up behind me so I went for a little sprint. Had the finish line been 2 meters nearer I would have beaten him. Never mind. It was all good fun.

I crossed the line with a chip time of 44:14 - a good few minutes off of my best time here but that’s not a problem. I came to have fun. I cam to see if my legs would work and my ankle wouldn’t fall off. Both of which seemed to behave themselves. That was more than I could have hoped for.

After I’d finished I went and cheered in many of the other runners out on the course. There were a lot of parkrunners out there today doing their first ever 10k. Many who’d only started running as a result of parkrun. I love this.

Being able to see their progress over the past year and cheer them over the line was fantastic. Almost as fantastic as the pint we had when a large group of us went to the pub post-race.