Today (Saturday) I was up bright and early (5:15am) as there were plans for this morning. You see, today is the first day of the official race week programme and it starts with a 2.4 mile swim race.

The event is called the “Ho’ala (Rise to the Occasion) Ironman Training Swim” and ever since I took part in the event two years agoI’ve been calling it the Koala swim!

Interestingly (or perhaps not) the north-west area of the island is known as Kohala. There’s a Kohala zoo and you see signs about on the bike ride to Hawi but unfortunately I don’t believe there are any bears to be seen.

Right, back to the swim. I did the race in 2013 and thought it was a great confidence builder ahead of the Ironman which takes place a week today. 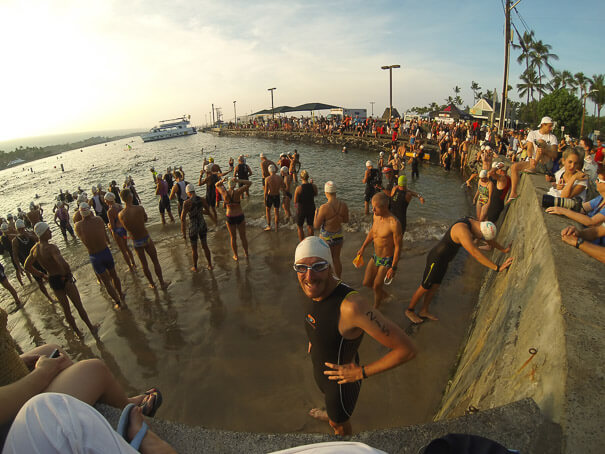 Seeing as though the last time I swum 2.4 miles was in September 2014 (yes, last year at Ironman Wales) this would be give me a good idea of my swim fitness. OK, I did swim a 2.4 mile race earlier this year but it was in the second fastest flowing river in England. I swam it in just under 50 minutes. This is ‘cheating’ though as the tide was running well in our favour. The only time I ever do an ‘over distance’ swim is if the buoys in the race are laid incorrectly!

Today I fully expected to swim closer to 1 hour 20 minutes. Two years ago I swam it in 1 hour 10 minutes. I am nowhere near that level of fitness at present.

So, the swim didn’t start until about 7:15am. It was supposed to start at 7 but because of the sheer number of people registering and entering on the day things were delayed slightly.

I got my race chip and t-shirt (I was very happy as its one of my favourite t-shirts so to get a new one is excellent) and then squeezed into my race kit.

I treat this event as a race day simulation in that I wear my triathlon race kit beneath my speedy swim skin as I will do for the Ironman. It’s all mental training. 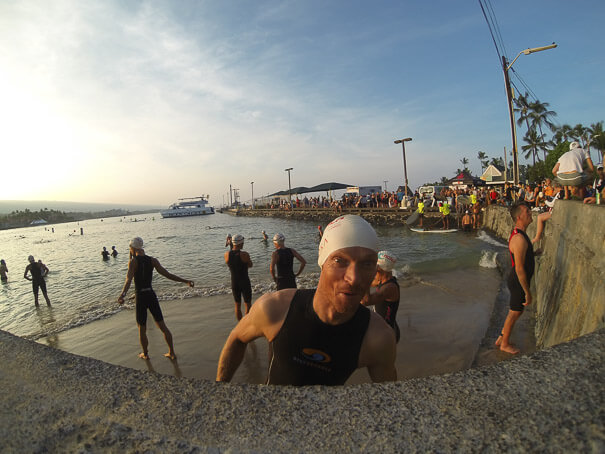 So at about 7am we (about 420 of us official entrants and a number of tight gits who didn’t want to pay) slowly headed out towards the deep water start line. As per usual I steered clear of the masses and found a quiet area. Perfect.

When the hooter sounded we were off. Every now and then I’d find some feet to draft off of. One chap I found myself behind was one hell of a kicker. There were so many bleeding bubbles it was ridiculous. OK so I’m trying to swim 2.4 miles but at the same time I want to see some of the fish swimming around the coral beneath me. I’m not here to swim through so many bubbles that I cannot see a bloody thing.

I reached the far turnaround buoy (which is the permanently moored Ironman full distance turn mark - indicating 1.2 miles from the beach/pier) and didn’t quite turn around - you turn 90 degrees, swim to another buoy and then turn back heading for home in just under 34 minutes. An hour and 8 minutes if it’s an even split would be brilliant.

The trouble is in the last two Ironman races that I’ve done I’ve swum slower in the second lap due to inadequate swim training and thus endurance. Today was bound to be worse as I’ve just worked out that I’ve swum on average 1.3km per week since the start of January (just over 54km swum so far this year).

Swim endurance is not going to be my strong point this year. That’s for sure.

The Ironman race now has separate male/female starts so I’ll be starting with all the hyped up blokes at 6:55am. Therefore when a trim young lady in a bikini came swimming past me I decided that these were the feet I wanted to follow. For about 20 minutes or so. In the race next week I’ll only have the chance to follow men, and as you (if you’re male) can imagine, the view is far less appealing!

Well, after 20 minutes of swimming very close together my fitness took its toll and I dropped back. And back some more.

The return trip seemed to take longer. I blame the tides. Or perhaps my fitness.

Anyway, I made it to the beach and finishing arch and crossed the line in a time of 1 hour 14 minutes and 33 seconds. This is better than I had expected to be so I was very pleased. Much that it’s nice to be faster every time you race I’m being realistic at the moment and know that I’m not as fit as I was in 2013 and fully expect my result today and next weekend to show.

It was good to see my old buddy and 1994 Ironman World Champion Greg Welch doing the commentary. I was more than happy to pose for a photo with him! 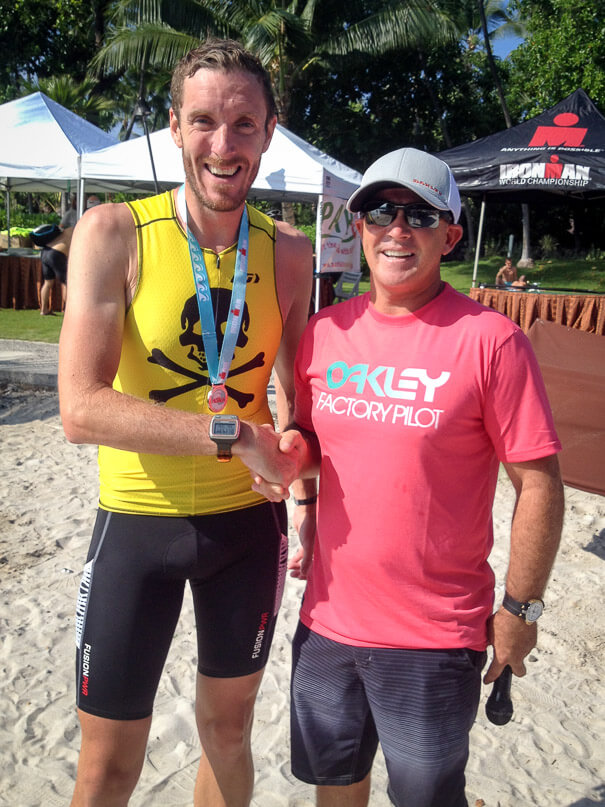 After a bit of chatting with friends we headed home to chill for a bit and I thought about going for a short bike ride.

Well… whilst thinking about going cycling I saw that there was an awesome freebie to be had at the Kona swimming pool today. First time Kona professional racer Callum Millward had some ‘trucker’ hats and visors to give away. He’s pretty popular on social media and makes some amusing videos (if you can understand his sense of humour).

Right… I’m all over this and getting myself a hat if possible.

So, I quickly got myself ready and headed out on the bike with the plan to get back to the pool in good time to make a rendezvous.

Sorted. I went for the hat.

I was first in line. In fact, there was no line! We had a bit of a chat and he knows pretty well our friends Jo and Matt from Australia who stayed with us for a few days in the summer. It’s such a small world and cool to make these kind of connections. 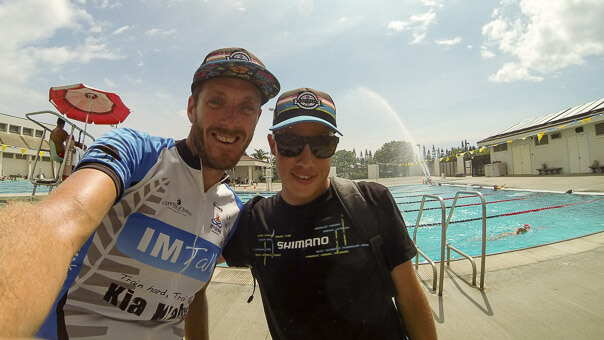 Being British I didn’t ask him for a visor for Sharon as I felt it rude to just try and take as much as possible. So I didn’t.

Sharon was very upset when I got back! Damn. I said we’d have to keep an eye out and see if there’s a chance to get a visor in the next few days. Everyone wants a cap so there’s bound to be some visors knocking about…

Later in the afternoon we got ourselves ready - Sharon in a new dress and myself in my new Aloha shirt and headed into town. You see, we’d bought tickets for the ‘Historic Kailua Village Lu’au’. A lu’au is a traditional Hawaiian party/feast.

I bought tickets for the event a couple of months ago as soon as they went on sale and have been looking forward to this for some time.

Upon our arrival as the sun was slowly falling from the sky we gave our names and were presented with beautiful fresh flower leis. The venue was right by the ocean and was in beautiful surroundings. 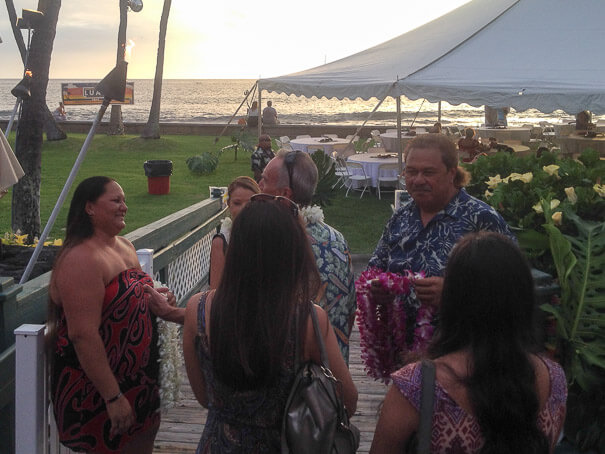 Tables were setup for eight people and we looked to find a table with some folk that we could befriend and join in with. We saw four people on a table, introduced ourselves, apologised for our strange accents and sat down. 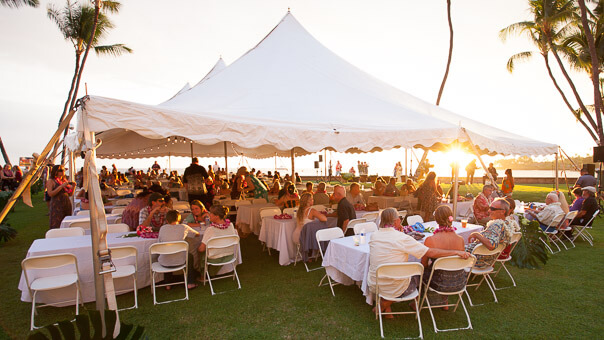 We had a great chat with the two couples (who didn’t know each other) and they both have timeshare-type properties in Kailua-Kona. I also got given one of the best business cards I’ve ever seen - when your ‘job title’ says ‘happily retired’ you know you’re onto something good. 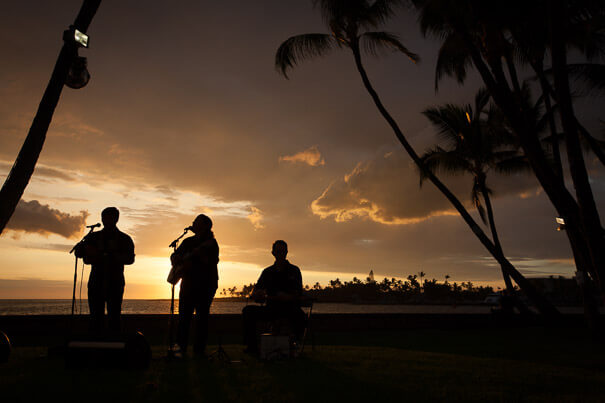 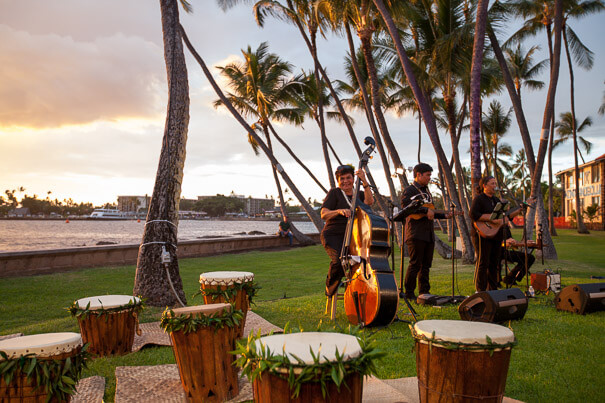 One of the couples help at the Ironman and will be ‘catchers’ - people who look after finishers as soon as they cross the finish line. They’re doing the late shift with the final race finishers. I really hope I don’t see them next Saturday evening! 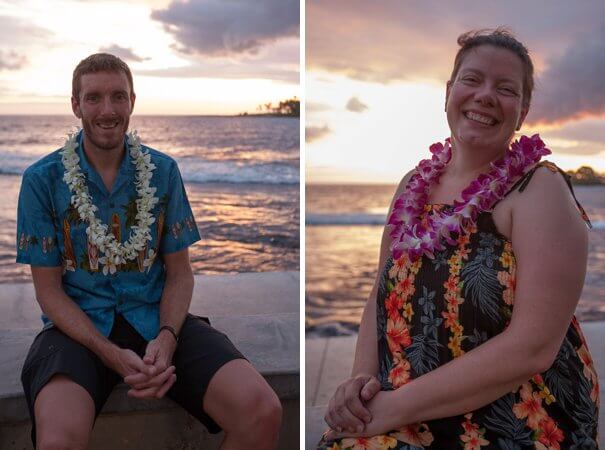 Bill (who gave me his business card) had an extra special lei on this evening. It wasn’t a flower one but one made from kukui nuts.

“The history of the Kukui nut lei dates back to the arrival of the early Polynesians to the Hawaiian Islands. They brought the kukui trees and nuts with them from south east Asia and cultivated them of the Hawaiian islands. The kukui tree is one of the most common trees seen in Hawaii’s forests. This beautiful tree has rightly become the state tree of Hawaii. The kukui nut lei was only worn by royalty in ancient times.” http://www.discover-oahu.com/kukui-nut-lei.html

I told him that I believed he was given the ‘posh’ lei as he seemed more distinguished and wiser than myself. I think he liked me sucking up to him and he then swapped my lei with his. How sweet of him. 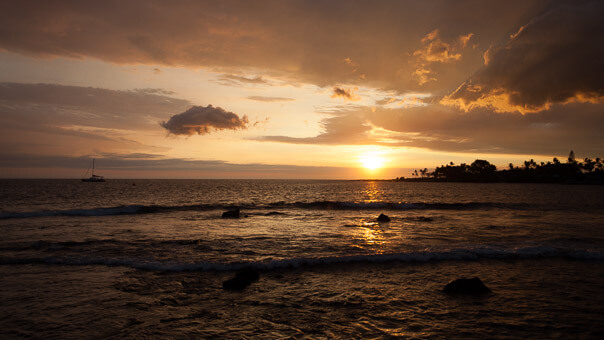 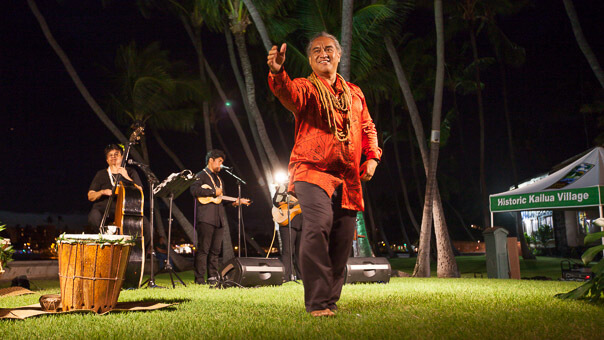 We had an evening of live music, hula and an amazing feast of food. Oh, and they had Kona Brewing Company Longboard lager at the bar. 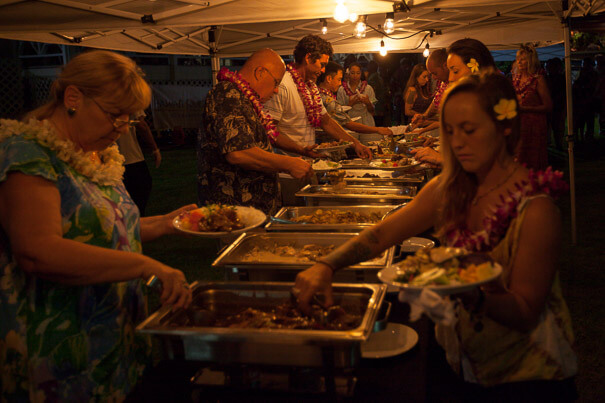 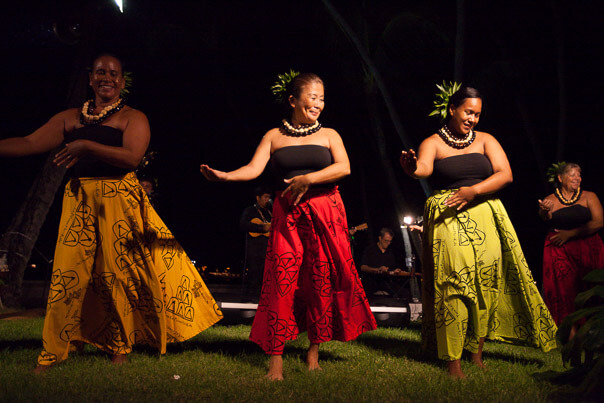 This is my kind of evening.

I’ve said before that the restaurants close early and this event followed a similar theme. It started before 6pm and we were done by 8:30pm. Which was good timing as it started to pour with rain.

It’s been fantastic to experience a little culture and go to a lu’au with local people from Kailua Village and not just people from overseas who are visiting on holiday (er, apart from us!).

As we left we were able to take the little ukulele that was used as the centrepiece of our table so that I can use it to serenade Sharon when we get home. Perhaps. 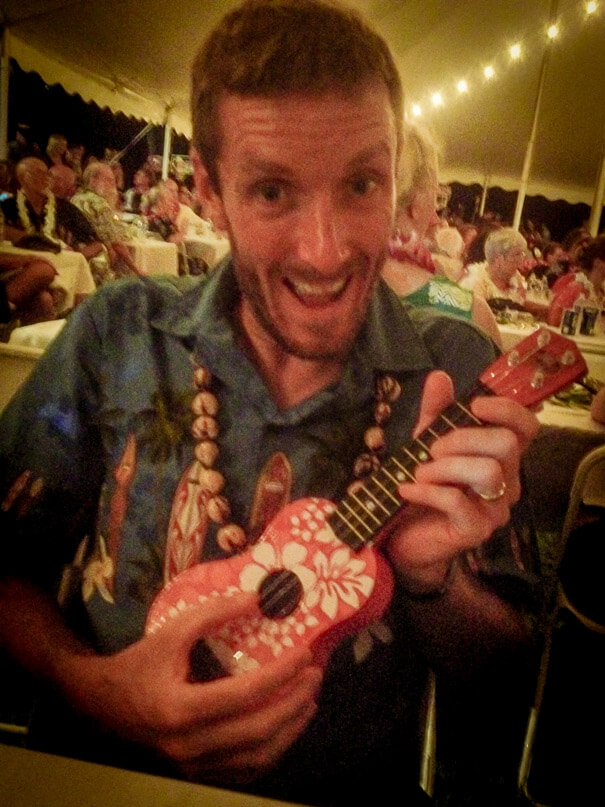 When we got back I took a look at the rain radar for the island. 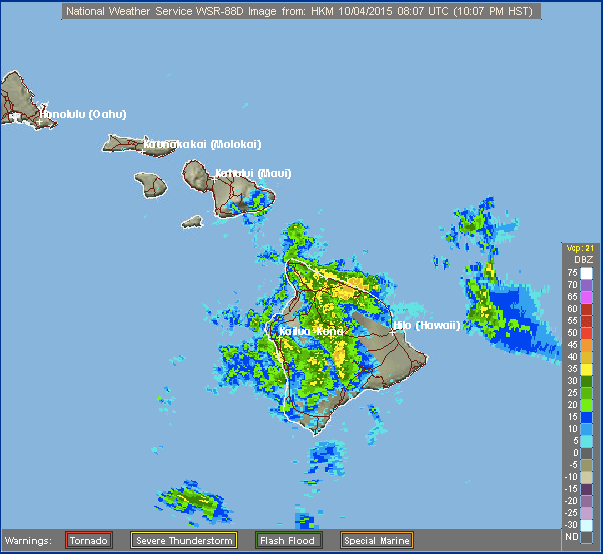 We had a fair bit of rain tonight. Hopefully it’ll cool things down a little for a little running event taking place first thing on Sunday morning…