Sunday morning before Ironman means the Path 5k (or 10k) road race - this time in its 29th year.

“Peoples Advocacy for Trails Hawaii. PATH is a non-profit bicycle and pedestrian advocacy organization headquartered in Kailua-Kona, serving the island of Hawaii. Founded in 1986, PATH’s mission is to safely connect the people and places on Hawaii Island with pathways and bikeways.” https://pathhawaii.org/

Sharon loves a bit of running medal bling so after the awesome medal in 2013 this just had to be one for the bucket list again this year. The event is well organised, well marshalled, in a beautiful location and there’s a stack of fresh fruit and drinks at the finish.

But first… the sunrise this morning. This was by far the best sunrise we’ve seen here since we arrived. The colours were amazing.

Back to this mornings race. The only downside is that it starts at 7:30am. Although this seems rather early this also gives you the best chance of cooler conditions. This morning Kona airport measured 83 degrees at 8:53am. The ‘heat index’ (what it actually feels like in the shade) was 89 and it topped off at 99 degrees for most of the afternoon.

Strolling to the start

Sharon was already registered and had collected her race number yesterday at the pier so we just had to go down to the start and wait for things to start. Charlie (who’s been mentioned a couple of times in the blogs this trip) was also there to run the 10k. 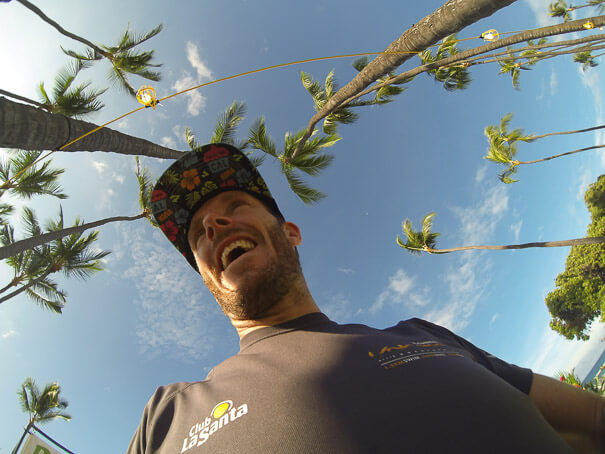 Prior to the start I’d arranged to meet up with Shannon and Leah - who were part of the group who I spent 12 days with in August 2014 cycling across the Rocky Mountains in Canada with as part of Epic Camp. It was lovely to see them. There’s a few of us from Canada here in Kona this year (not all competing, some just supporting) and I’ve also caught up with Barry and Rob so far. I just need to track down Douglas and I think that might be everyone who’s here right now. 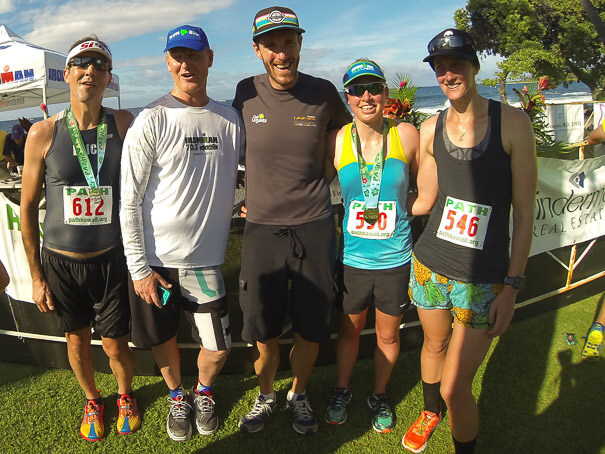 Whilst waiting around before the start a familiar voice came up and said to me “Hey, you’re back.” It was none other than Ironman CEO Andrew Messick. We chatted a few times a couple of years ago and he spotted me at Ironman France last year.

I suppose I must be pretty recognisable. Tall, more hair on my face that most triathletes have on their entire body. Yeah, I guess so.

It was good to fill him in with how and why we found ourselves back here for our second ‘once in a lifetime’ trip to Kona.

So at 7:30am the 5k runners set off on what is part of the Ironman marathon course. Ali’i Drive was looking mighty fine and the waves were crashing away in the background as the runners came past the first area of exposed oceanfront. 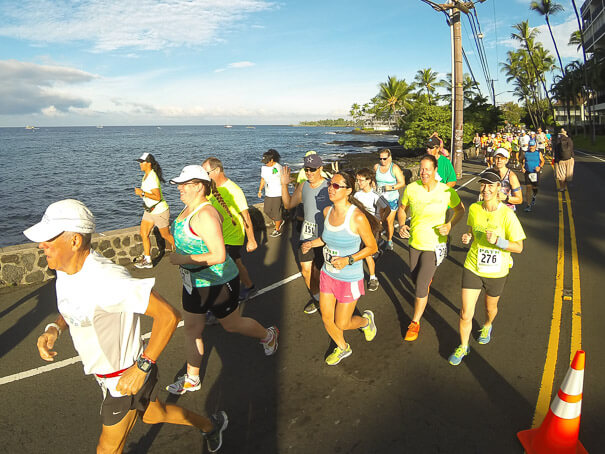 Sharon (near the left of the photo)

At 7:35am the 10k runners set off and then we had about 15 minutes or so to relax and wait for the 5k race leaders to head in. 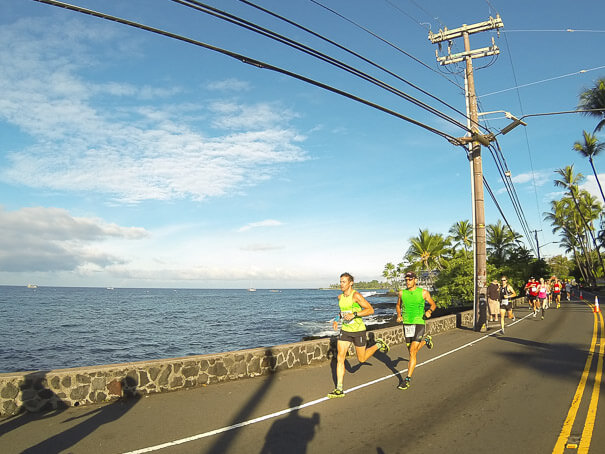 Charlie and Alain from Team Freespeed in the 10k

There’s plenty of support on the course for the race, especially in town and it’s a really nice thing for family members who aren’t doing the Ironman to take part in - and get an awesome medal. 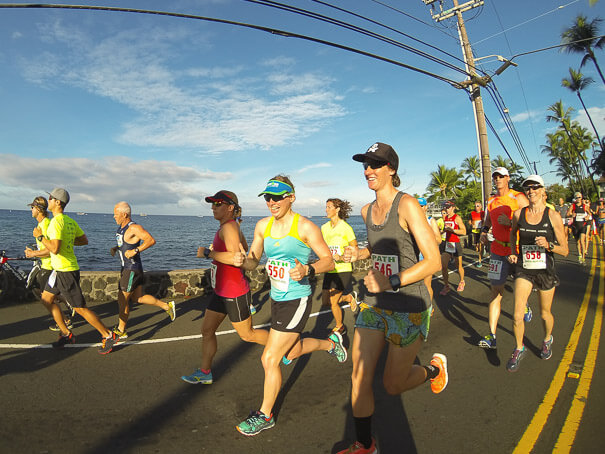 I found a good little shady spot close to the finish and waited for Sharon to come by. She came past, smiling, and at the same time flung an empty cup at me. Charming. 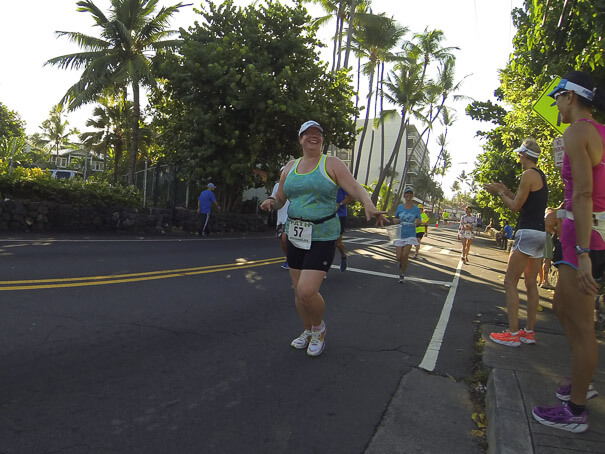 Round to the finish (what an mighty fine location for a finishing chute) and she was done. Proper done. 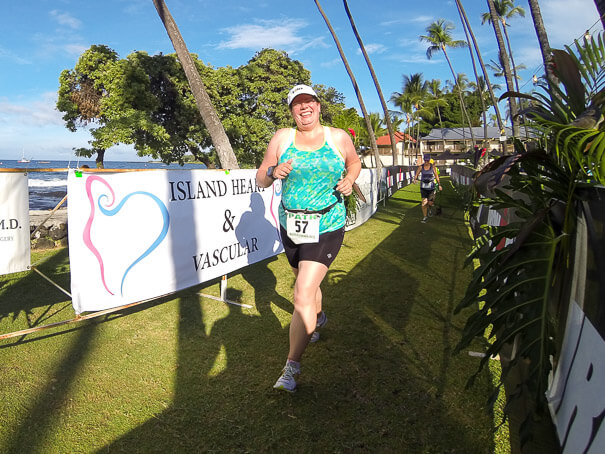 Medal received and all was good. 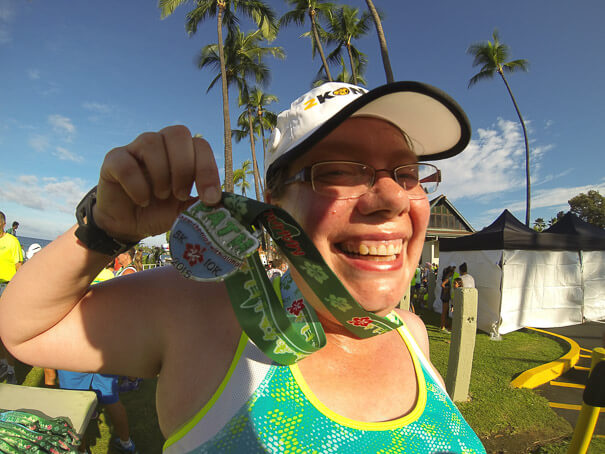 Only a couple of minutes later Charlie came in as the winner of the 10k race. Brilliant work there. It looked like he’s been swimming half way round the course as he was drenched. Still, that doesn’t matter when you’re on top of the podium. Well done. 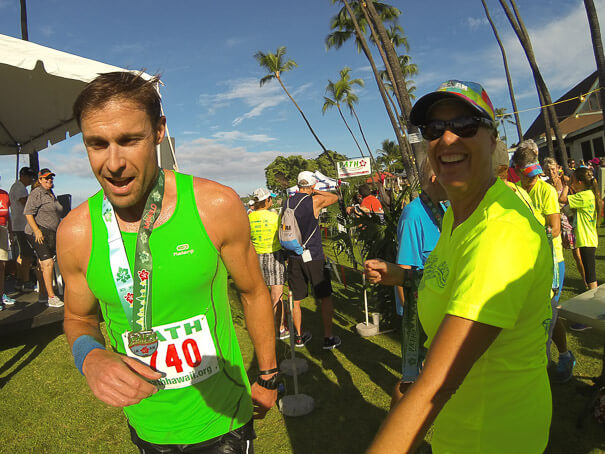 As the last runners were finishing the slowest prize giving to mankind then took place. Charlie got first overall and Leah and Shannon both got 3rd in their age groups. 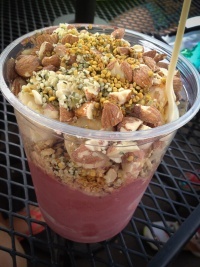 After that it was time for breakfast and we headed over to the Acai Bowl shop just over the road from Huggo’s restaurant. Mine included peanut butter, cashew milk, almonds, seeds, honey, granola, and banana. It was lovely.

Sharon and I headed back home for a planned day of doing very little.

Only a couple of hours later we found ourselves at the Kona Aquatic Center (swimming pool). Sharon’s not been swimming in a pool for probably a couple of years or so but it had to be done - as another opportunity arose to get hold of a running visor (which I didn’t get for her yesterday!).

It’s funny, I had a couple of people ask me today where I got my hat from as they really wanted to get them. It’s really not difficult if you want one.

We were at the pool until a good half an hour after you could get a hat/visor and there were still some left.

This cheered Sharon up no end which was certainly a good thing after I came back from my bike ride yesterday with only a hat for myself!

We then headed back into town to have a look at the Ironman merchandise tent. This place made a major dent in our credit card two years ago (well, it was a once in a lifetime trip) but we were much kinder to the plastic today.

I also headed over to the Rudy Project store and picked up a brand new bike helmet for $50 (this is a deal for Ironman competitors only). You can pick the same helmet up in the UK for around £100 so to get about 65% off of that price is damn fine (especially when the RRP is around £150). That’s another thing to squeeze into the luggage when I go home.

I also squeezed in a little shave ice drink whilst strolling around town - just to keep the energy levels topped up you see.

Back home, a little relax by the pool listening to the ocean and watching the sunset (which was very poor today) and that’s how another day drew to a close.

Monday is the start of race week proper so things will no doubt be a little busier over the coming days. It’s also really exciting as our friends Andy and Emma will be arriving to support at the race. They came over last time and loved it so much they’re back for more fun in the sun…

And to watch me suffer on Saturday!