Wednesday started with guess what… a swim. A swim to the coffee boat is about 450m each way so this is all good low impact exercise in advance of Saturday’s little race. Andy and I picked up a pair of free goggles as well out there from the good folk at Blueseventy.

In preparation for tomorrows ‘underpants run’ I needed to give my ridiculously small (read, size 30 inch waist!) swimming trunks a go. The lovely ‘Funky Trunks’ that I had last time seemed to have gone AWOL. I think I left them in Canada last year. This is very upsetting as I know there’s people back home (well, just one lady - Carol) who demand to see photos of me sporting these trunks.

Well, I picked up another pair of similar style (i.e., too small and skimpy) trunks two years ago in Kona so these are the new trunks for me. 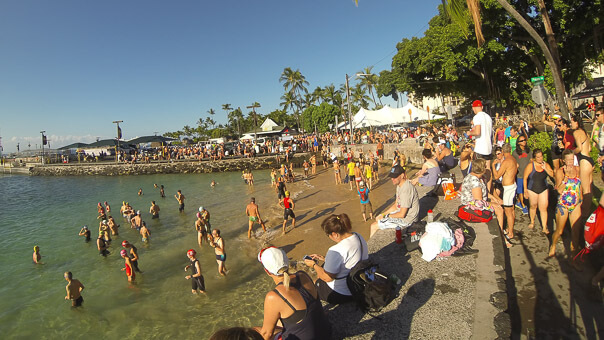 When I came in I saw a lady holding a little sign that said ‘Iron Lew.’ This was in reference to her father. You see her father is called Lew Hollander. He’s doing the Ironman on Saturday.

He’s done the race here in Kona 23 times. Aiming for a 24th finish on Saturday. 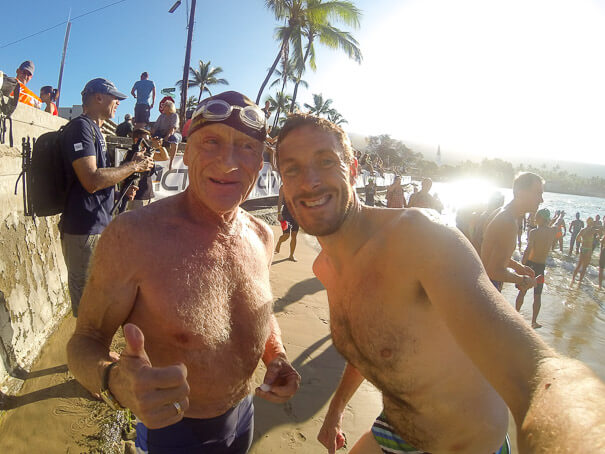 He’s a legend (you could tell that by the NBC television crew following him around and the queue of people trying to get a photo) and there’s a great article on the competitor.com website that is worth reading.

Andy, Emma, Sharon and myself then headed over to the lovely Daylight Minds coffee shop/restaurant for breakfast. This culminated in a meet and greet with defending womens champion Mirinda Carfrae - I got a nice signed photo to go by the indoor trainer at home.

The support crew then headed to Huggo’s for Breakfast with Bob. You see - in addition to some interesting interviews, a cool breeze and some shade there’s plenty of juice and fruit to be had there. It really does seem to be a bit of a Kona secret.

Whilst they went one way I went the other - back to the pier to register for the race. There was no queue whatsoever and I just went straight in, signed a number of forms (if you don’t sign them you cannot race - so I signed them) and then moved onto someone else, and then someone else, and then you get a really nice waterproof race backpack filled with all sorts of goodies (such as towel, a voucher for some new headphones, suncream, all sorts of things). 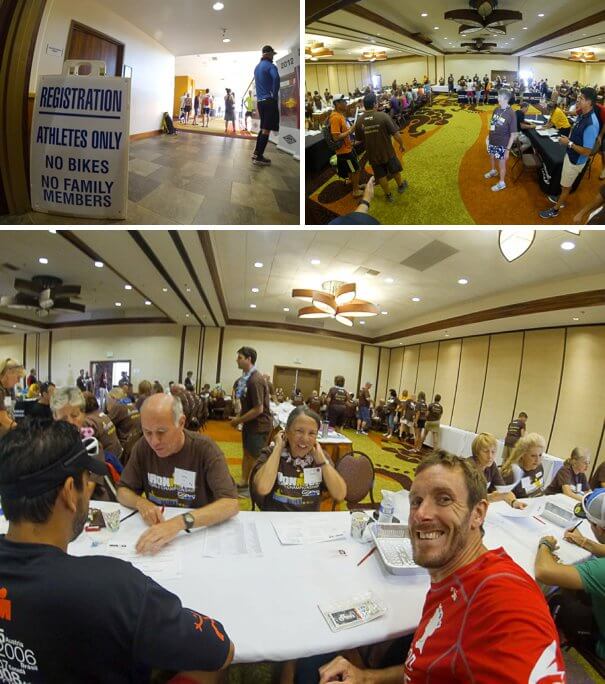 Whilst I’ve been here in Kona I’ve been keeping an eye out for a lovely volunteer who I managed to somehow bump into many many times in 2013. A friendly young lady by the name of Katie.

Well… you know where this is going don’t you. As I left registration there’s an area at the front of the main race hotel where you can leave bikes securely whilst you swim/register/whatever. One of the ladies there looked familiar. I went up to her and politely asked to confirm her name.

She went nuts! It was brilliant. It was Katie. She remembered me. She remembered that she’d seen me a million times during race week before. It was lovely to see her (any by the look on her face she was pleased to see me). This cheered me up no end (not that there’s much to be miserable about being here - oh, other than knowing that you’ll be running a marathon in 90+ degree heat on Saturday afternoon!). 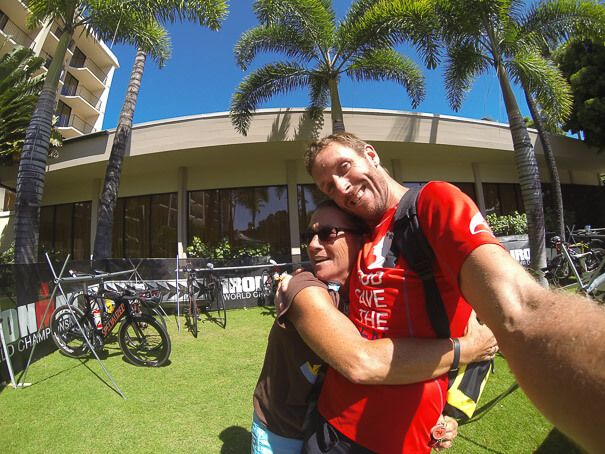 There’s also a huge sign (it gets bigger every year) with a list of all the registered athletes taking part on it. I found my name and took the obligatory photo. 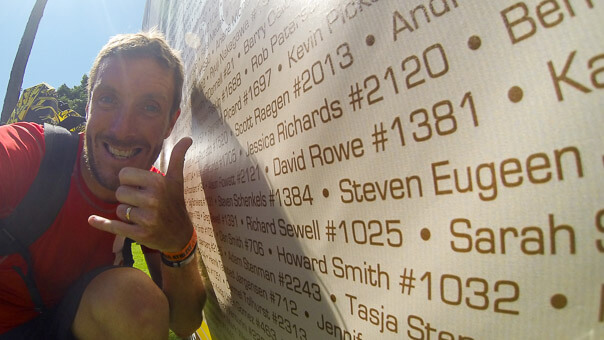 I then headed over to Huggo’s to meet with the ‘support crew.’ The first interview I saw was with a chap called Sean Astin. Apparently he’s an American actor famous for being in The Goonies and also the Lord of the Rings films. He gave a really interesting interview along with his coach which can be watched on YouTube.

There’s always a handful of celebrities in the race and he’s one of this years selection - which also includes Sunny Garcia and Gordon Ramsey.

Next up with Michelle Vesterby. She’s a great upbeat and funny character to have around - always cheerful and amusing. Her interview was funny as ever (she only said the ‘F’ word once!) and she was very impressed that we were sporting the temporary tattoos that she gave us the night before at the Expo! 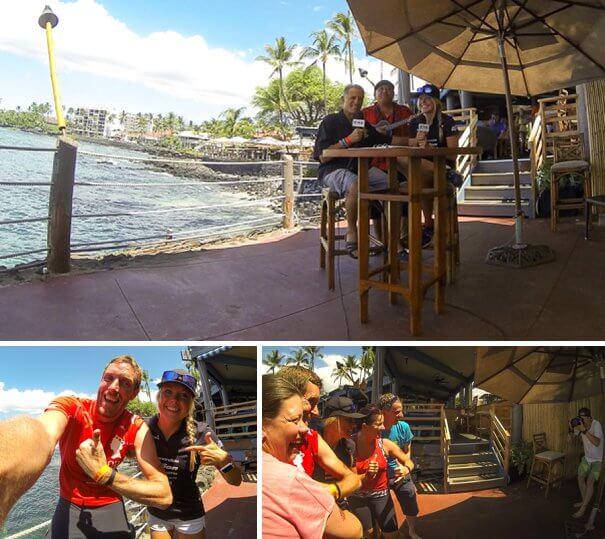 Following her was Daniela Ryf - she led the race until the final few km’s last year and is hungry for the title on Saturday. It could be an amazing race for the women this year. 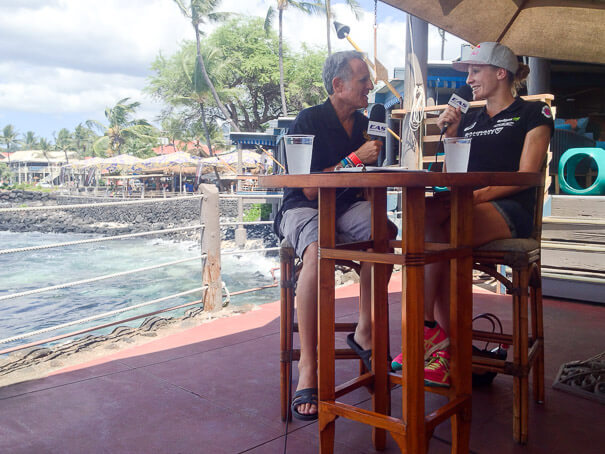 After her interview Sharon got a very hard to find ‘top trumps’ style card with her photo on it signed. This will make us millions one day and enable us to retire. Or perhaps not. 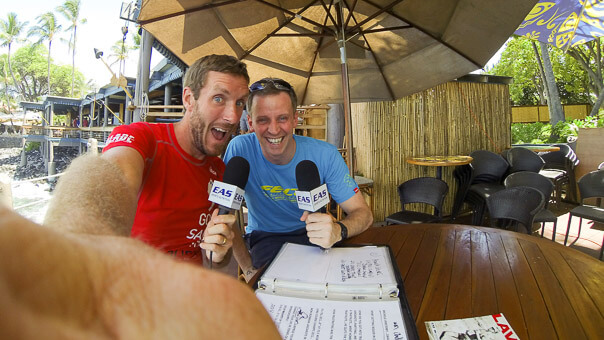 Breakfast with David and Andy

Sharon and I headed home for a quick bite to eat, I then nipped out for a 10 mile bike ride (just to keep the legs moving) and then headed back for a lightning fast shower before the next thing on the agenda!

We all met up about half a mile up Ali’i Drive to go to the Slowtwitch gathering. This is an annual event organised by a US triathlon website. I’ve been before and it’s a nice little event always in a fantastic location with food, drink and an amazing raffle for some superb prizes donated from companies within the tri industry. 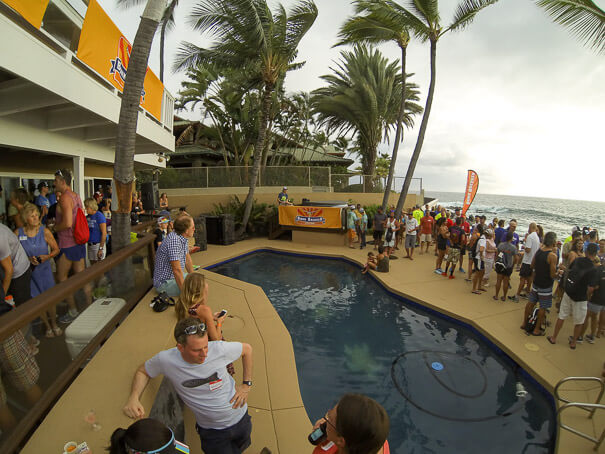 Speaking of drink, they had plenty of beer and also ‘nuun’ drink - this is a tablet that you put into water and it dissolves into a sports drink. At this party they made it extra special - they topped it up with vodka. A nuun cocktail. They were lovely. 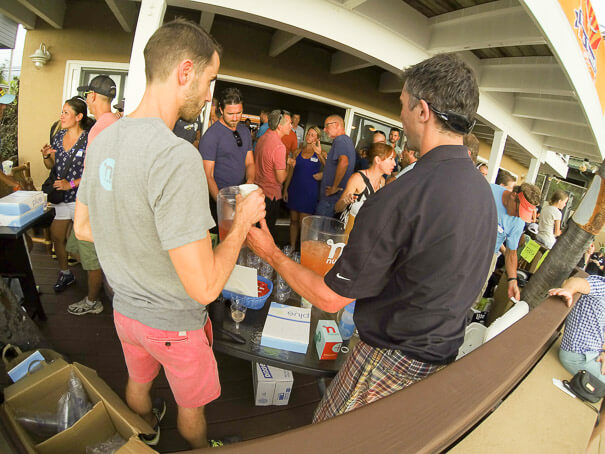 Zwift is a relatively new virtual reality type bike training application for your home computer. You hook it up to your indoor trainer and can train/race against people all over the world. I had a demo of the system which looked very smart (my computer at home where I train isn’t powerful enough) although riding on a stationary bike trainer in the heat wearing casual clothes made it stupidly hot. I was sweating for about 30 minutes afterwards.

They also gave me a demo of the system with riders wearing Team Freespeed kit. Now that looked smart. 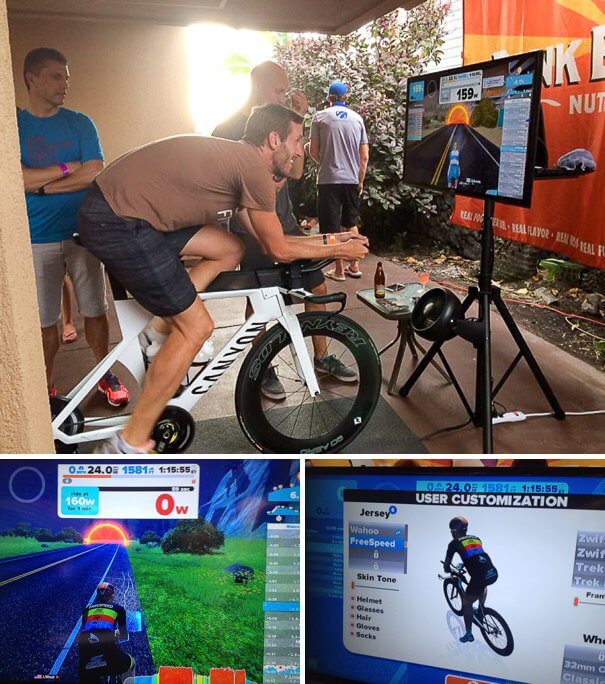 At about 6pm as the sun was setting the raffle took place. For the second time I didn’t win anything. The top prize was worth around 1600 US dollars. Not bad for just turning up.

As the evening drew to a close so did my eyes.

Surely Thursday would be a quieter day…