Guess what - yup, a swim kicked off the day at a little before 7am. All these pre 7am swims I’ve been doing this week are part of a clever little strategy that I’m working on. If I get the body used to swimming at this time when the (rather loud!) cannon goes off at 6:55am on Saturday morning (5:55pm UK time) even if I’m asleep my arms will be used to just swinging around and I’ll get through the 2.4 mile swim no trouble. 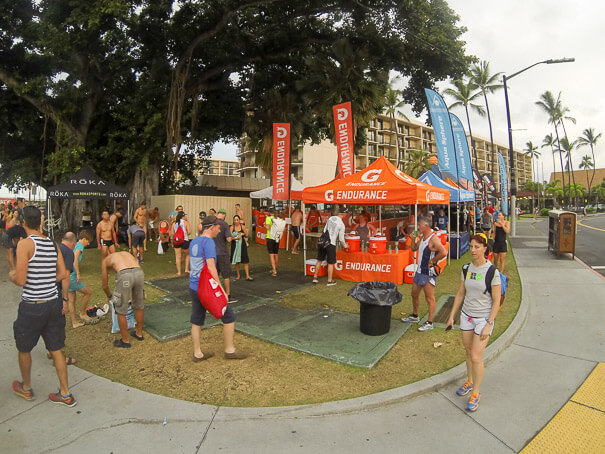 I had a good swim and spent a little time with some of the folk I went to Epic Camp with in Canada last year. It’s so nice to see some of the people here - even if they’re not all racing.

Once the swim was swum it was time to get ready for the underpants run. This involved me putting on some shoes. That’s all.

OK - so the trunks I’m wearing are not technically (or even close to) underpants, but they were part of the day in 2013 so they’re back again - even if I weigh at least 10lbs more than last time.

IF IT’S THURSDAY IN KONA, IT’S THE UNDERPANTS RUN!

The tradition continues into its 18th year! It is still only a $20 donation and with that you get your choice of a hat or visor from Headsweats, t-shirt from Greenlayer, socks or underpant. Please sign up early and let everyone know who will be in Kona about this great event and to come out and help us put the Kona Underpants Run on the map and raise money for the local charities!

The run conceived of in 1998 by Chris Danahy, Tim Morris, and Paul Huddle as a protest against wearing Speedos in inappropriate places (stores, restaurants, etc.) has morphed into an IRONMAN pre-event ice breaker and local fund raiser that has become an integral part of the Ironman World Championship event week. Supported by the McMichael family (owners of Pacific Vibrations), Cannondale, Head Sweats, Garmin, 110%, Surftech, Green Layer, Wattie Ink, Betty Designs, Wood Underwear and, obviously, Multisports.com, the event continues to grow with the mission of having a little fun while giving back to this great local community.

I turned into a bit of an underpants run whore for this event. I started with Petro from Epic Camp, then found Barry, then spent a bit of time with Jennifer and finished up as I should do with my good friend Paul Deen (and the rest of the BlackLineLondon gang). 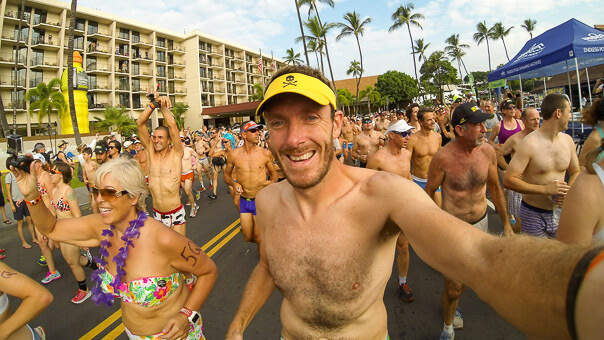 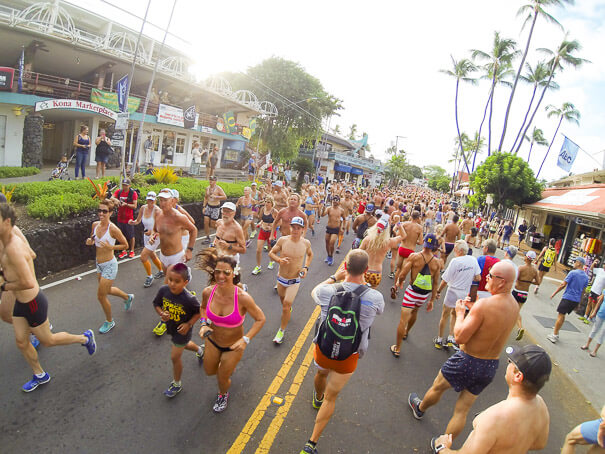 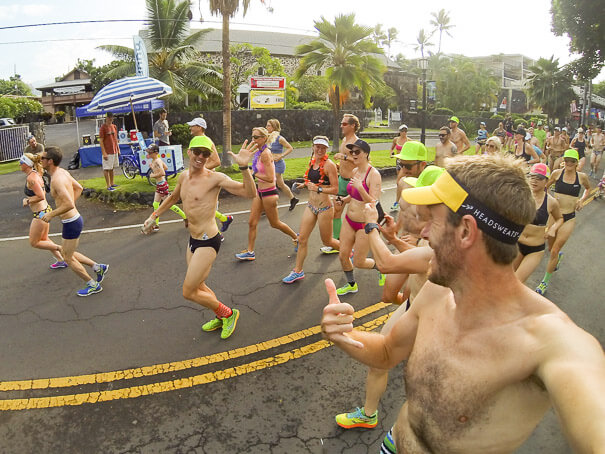 It was a lot of fun. 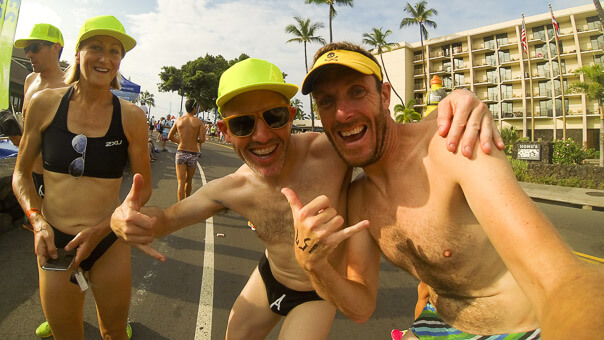 I saw Katie (the volunteer) again. It was her birthday. She almost got to see me in my full ‘birthday suit’! Lucky lucky lady!

After the run had finished a few of us found a chap who was handing out free stuff. I ought to take a look. Oh, I got given a lovely ‘wife-beater’ vest with’Moments of Kona’ on the front. Moments of Kona is a great website with some fantastic photos of the build-up to this great race. I’m sure half the people grabbing the freebie have no idea what it was all about. 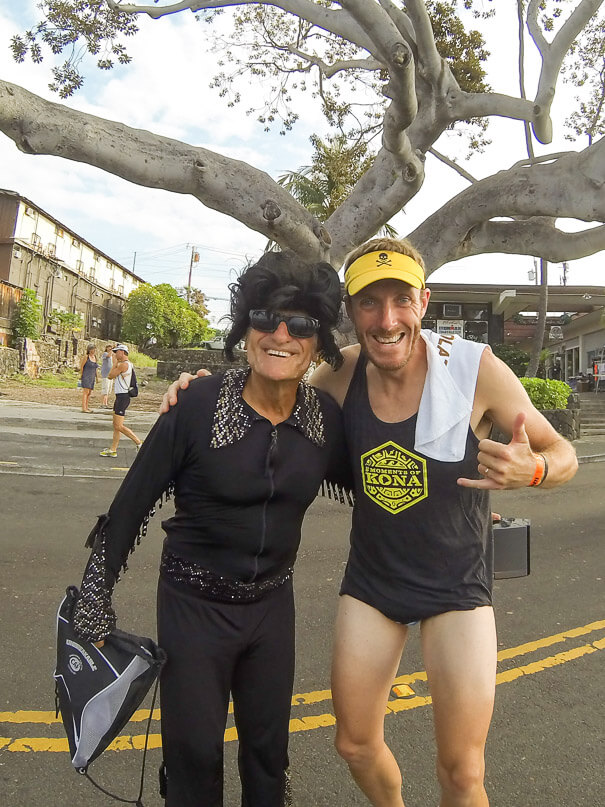 Bob Babbitt (Elvis) and me looking half naked (for a change!) 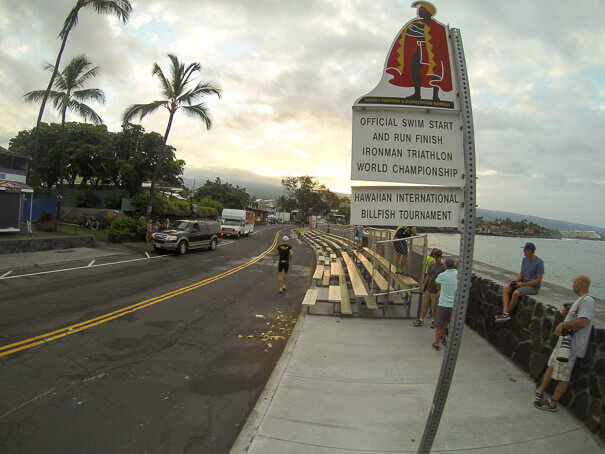 The finishing straight is starting to be transformed

Post run we found ourselves back at Huggo’s but this time I was there primarily to get myself a fancy ‘Kona 2015’ Cervelo (my bike is made by Cervelo) cap. There was a twitter competition being run by one of the pro athletes (Mary Beth Ellis) and I just had to track her down and tell her the answer to a question to get the hat. For a pretty sweet hat nobody other than Andy and myself were there. 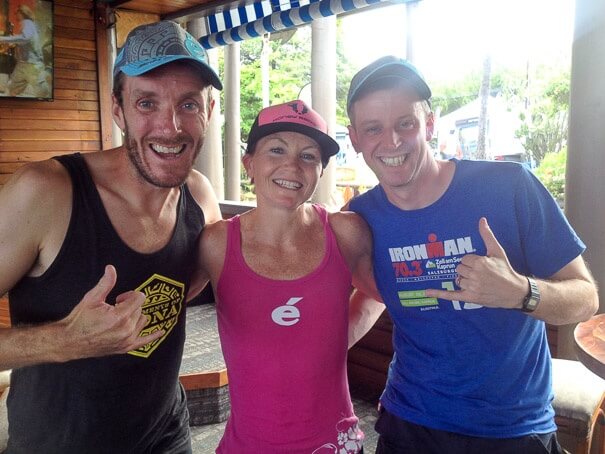 After watching a couple of interviews we headed to Lava Java for brunch by the ocean. This place is so so nice. 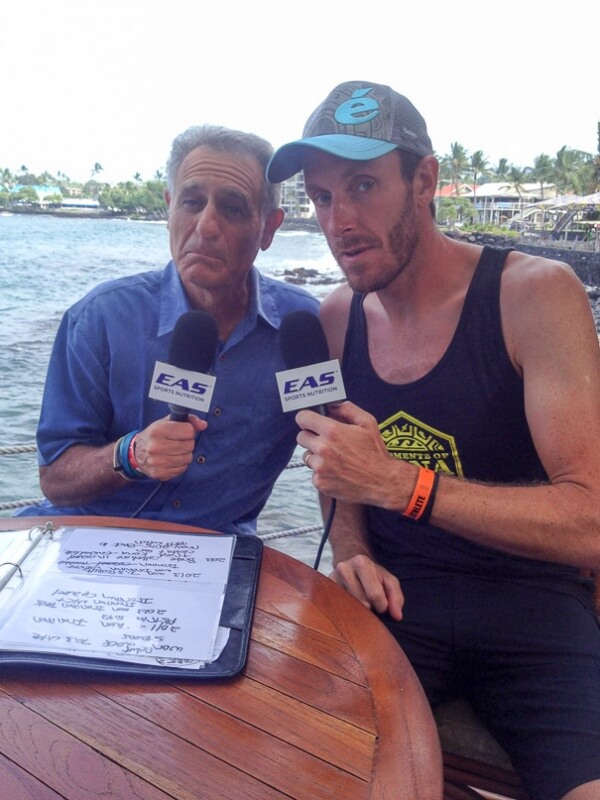 OK, so I do like a cup of coffee and/or an ice cream by the promenade where we live in England by the sea but this is lovely in a different kind of way.

We took (yet another) stroll around the Ironman Village (expo) and I picked up a couple of freebie t-shirts. Some stands just give this stuff out if you ask and others charge 15-30 dollars for t-shirts. I’ve got so much stuff but if a little wink and a few nice words gets me a freebie then I’m all over it - as you’re probably aware from reading these blog posts.

Next thing - wheels. I’ve got some lovely wheels for my bike. I bought them a few years ago and they cost more than a reasonable second hand car. The manufacturers have a store set up in town where if you take your wheels to them and give them 50 US dollars to donate to World Bicycle Relief they’ll remove the ‘Zipp’ stickers and replace them with some funky Kona Zipp stickers.

Seeing as though the stickers can be a pain in the backside to remove and that there’s a good charity behind this I gave them my wheels and a fistful of dollars.

The rest of the afternoon was pretty quiet. A little relaxing. Having a look through the registration stuff I was given yesterday and then heading back to town to collect the blinged up wheels. 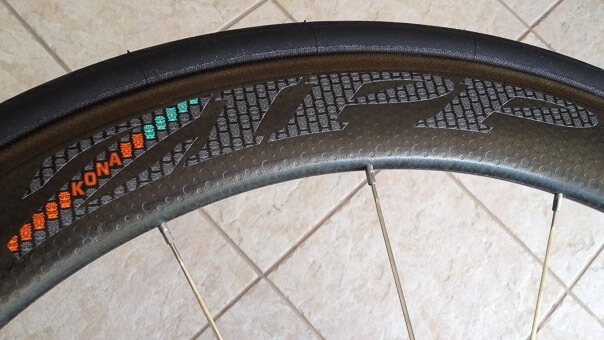 As the sun set (it seems to do so on a daily basis) I headed to the King Kamehameha hotel to attend the pre-race welcome buffet and race briefing. Sharon didn’t come (or fancy paying 55 dollars for some pasta - she’s been before anyway) so whilst she went out for dinner with Andy and Emma I had…. some pasta. 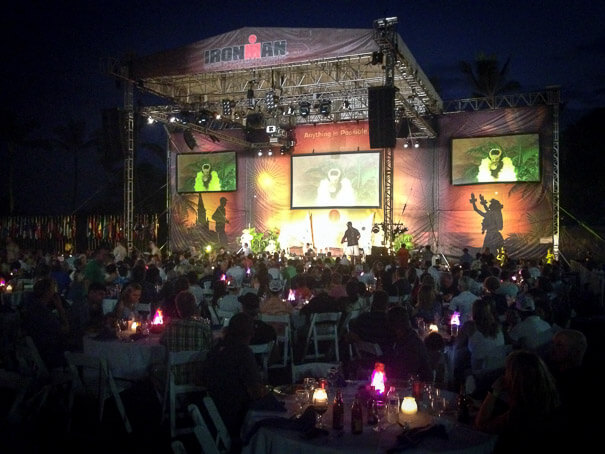 Actually the food was quite nice. I thought the event was pretty good - there was some traditional Polynesian dancing and then a number of interviews and conversation with the likes of Bob Babbit, Greg Welch, Lew Hollander, Paula Newby-Fraser, Craig Alexander and more.

The theme of this years race is ‘Onipa’a. This means the strength to remain steadfast, resilient and resolute.

Many stories were told and we also heard that Hector Picard, a double arm amputee is taking part on Saturday. When he rides his bike he changes gears with his chin and brakes with his knees! There’s an interview with him pre-race from Breakfast with Bob on YouTube.

At the end of the event I strolled back to where the others were having dinner and then we headed to a bar for an ice cold beer (Kona Brewing Company ‘Longboard’ lager for me) and then home for hopefully a good nights sleep (as I’m unlikely to sleep well on Friday night).