Thursday is our last day in Hawaii. We’re loving it here but looking forward to getting back to the UK as well. As our flight isn’t until this evening there was of course plenty to do! Especially when I’m involved.

We headed off in the car north up the Queen K highway up to mile marker 91 and pulled over. On the mountain (mauka) side of the road right beside the highway is a rather impressive (but collapsed in places) lava tube. 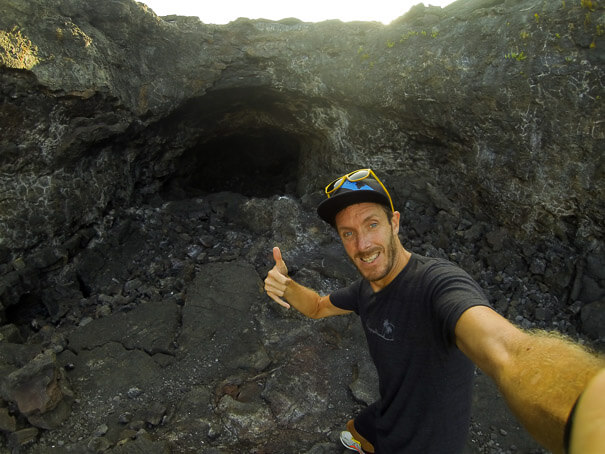 A lava tube is a natural conduit formed by flowing lava which moves beneath the hardened surface of a lava flow. Tubes can be actively draining lava from a volcano during an eruption, or can be extinct, meaning the lava flow has ceased and the rock has cooled and left a long, cave-like channel. 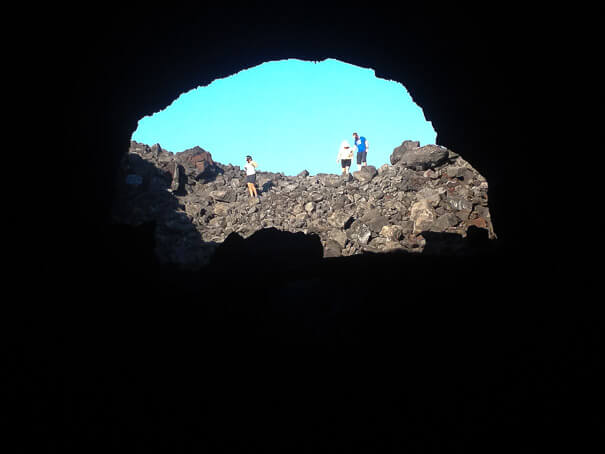 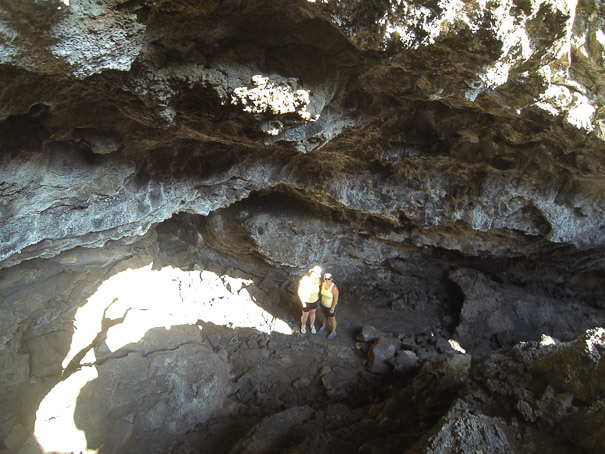 We climbed inside, crawled around a few rocks, hoped that it didn’t collapse on us and sweated profusely in the morning heat! 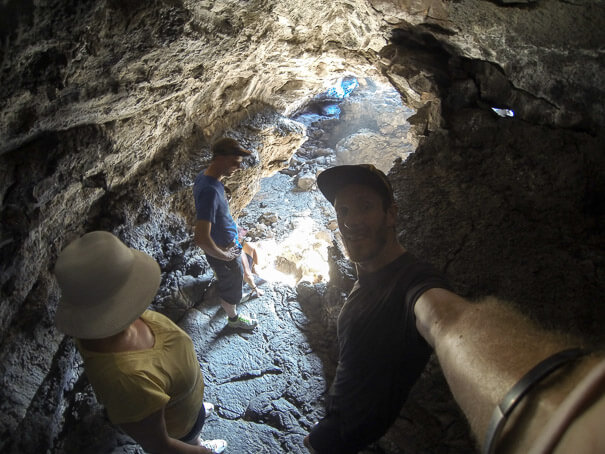 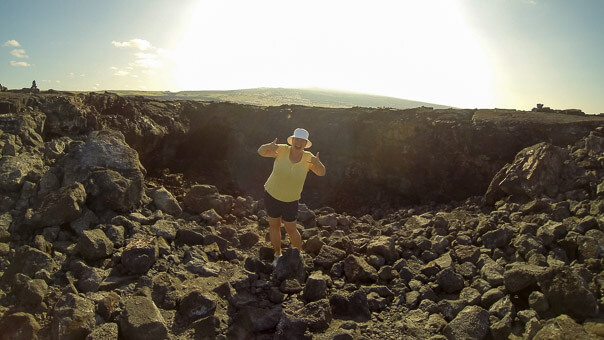 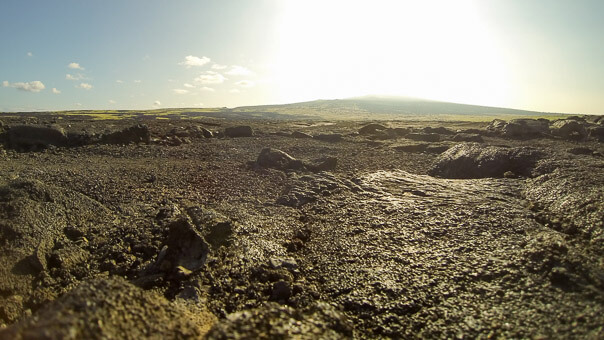 It’s not all sandy beaches in Hawaii

It was time to cool down so we headed a couple of miles further north to Kua Bay. This is also known as Manini’owali beach - and is part of Kekaha Kai State Park. We got there just before 9am and the bay did look truly stunning. 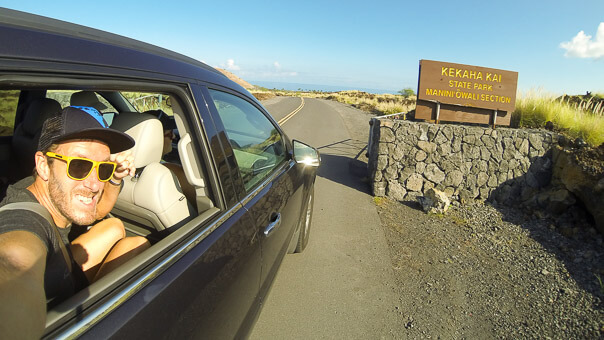 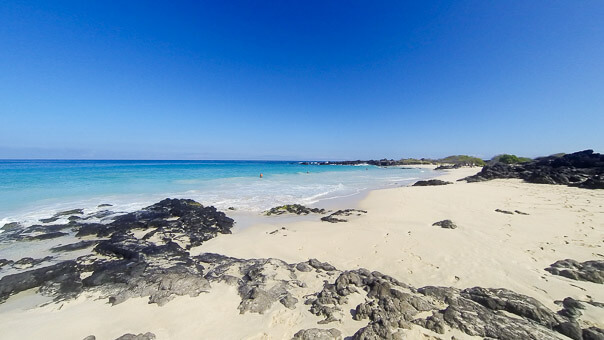 The ocean was a wonderful colour and very inviting - apart from the usual shore dump (which was pretty substantial when a set of waves came in). Andy, Emma and myself headed into the water to do a little snorkelling. Sharon relaxed on the shore beneath our beach umbrella. 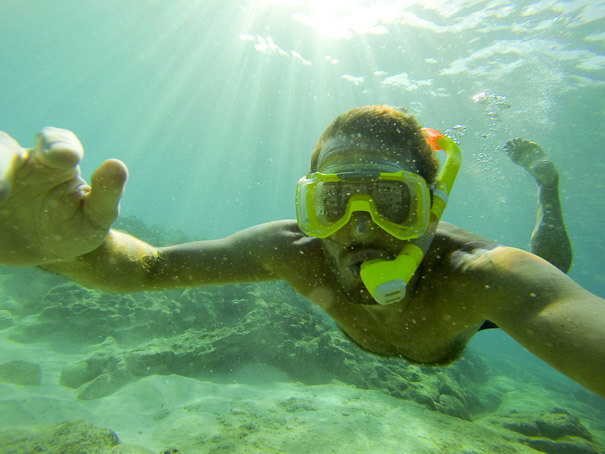 The water was incredibly clear but the swell was substantial enough that I didn’t want to get too close to the reef - as it was close to the shore and I didn’t fancy getting thrown onto a beach full of unforgiving lava rocks! 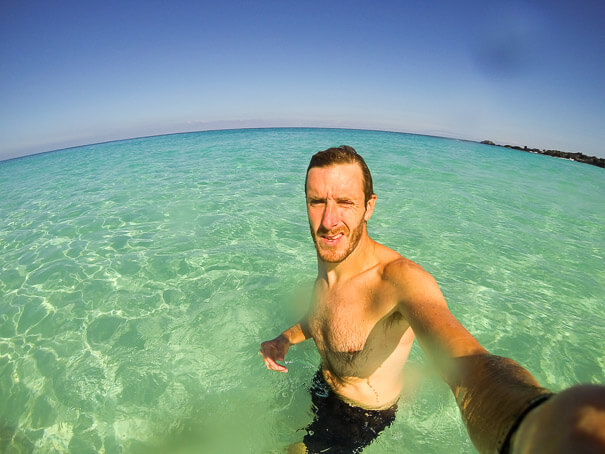 The snorkelling gear was returned to shore and I opted instead for a little play in the waves - trying to get any nice photos of them breaking. 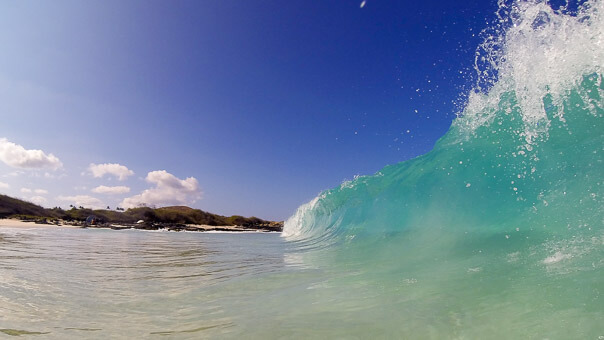 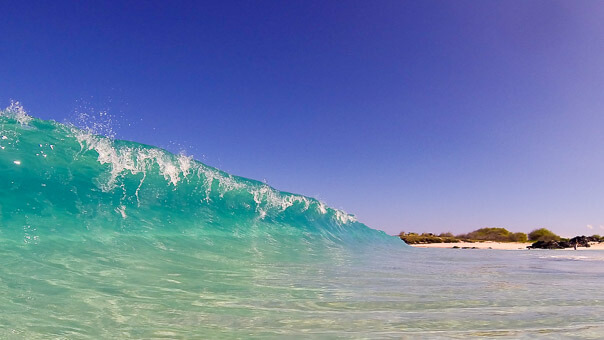 Whilst out in the water I saw a turtle swimming below. They seem to love playing near the surf and I think this is the second or third one I’ve seen this trip. 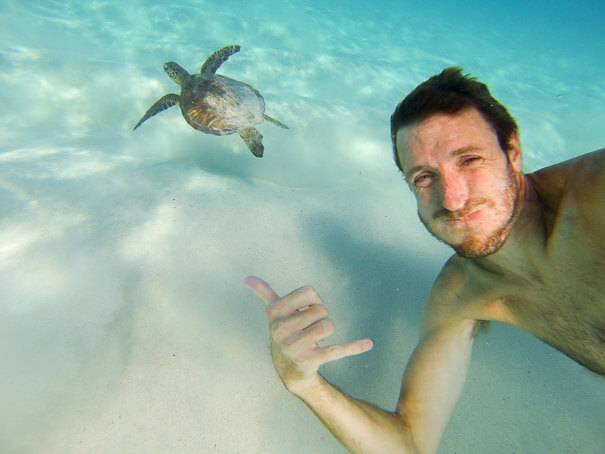 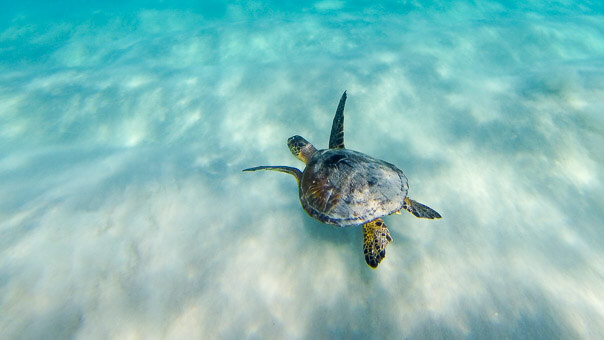 After getting thrown around in the waves and collecting half of the beach in my swim shorts we showered off (lovely freshwater showers beside the beach) and headed back towards Kona. 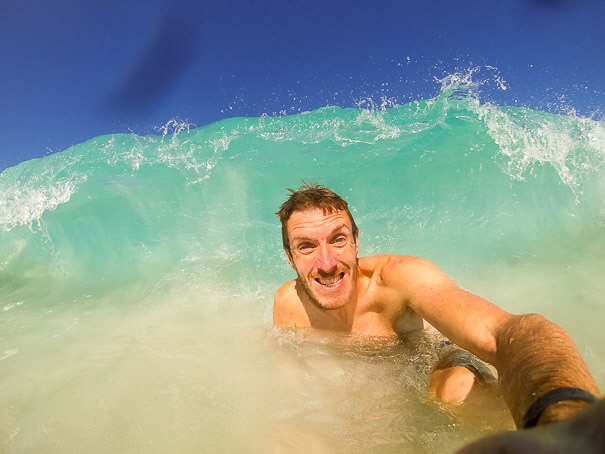 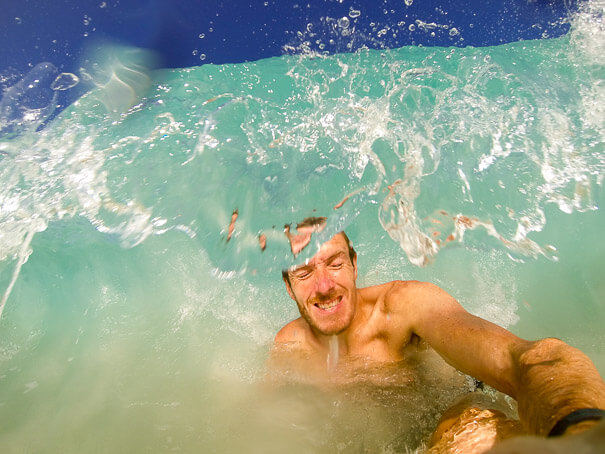 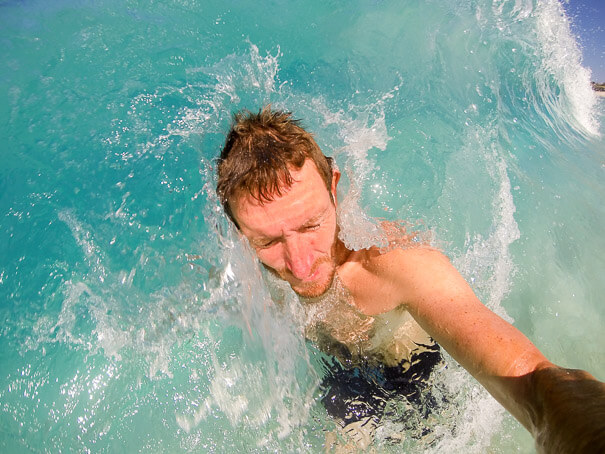 As we didn’t quite get a great snorkel experience, we decided to head to Kahaluu Beach Park towards the south end of Ali’i Drive. The snorkelling was great and when Emma rushed over to us telling us to follow her this could only mean one of two things - a shark or a turtle. 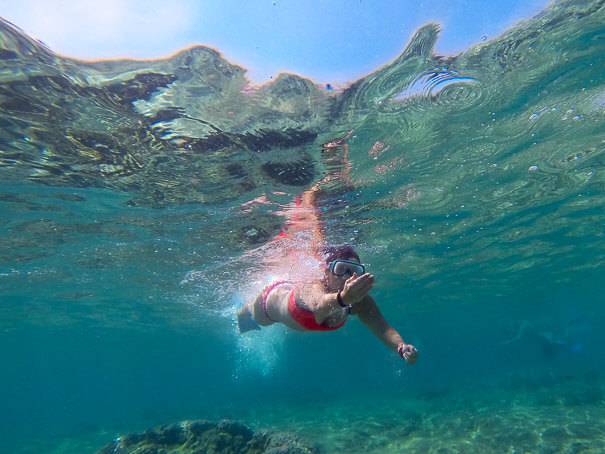 Thankfully it was a turtle. And a great big one at that. 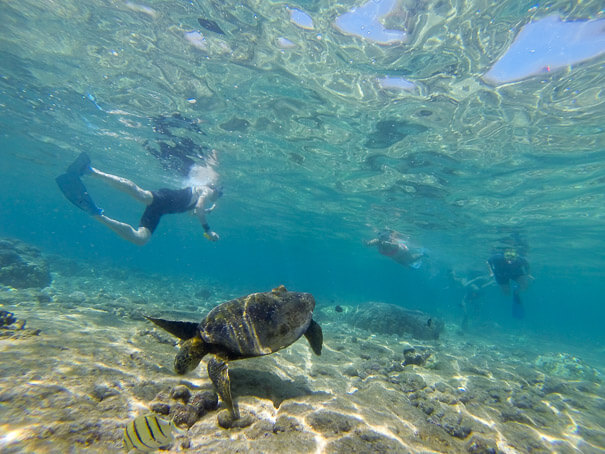 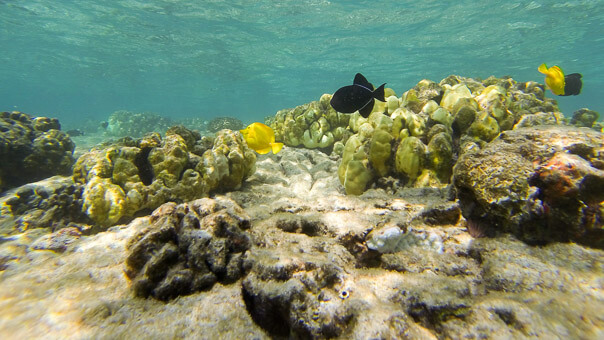 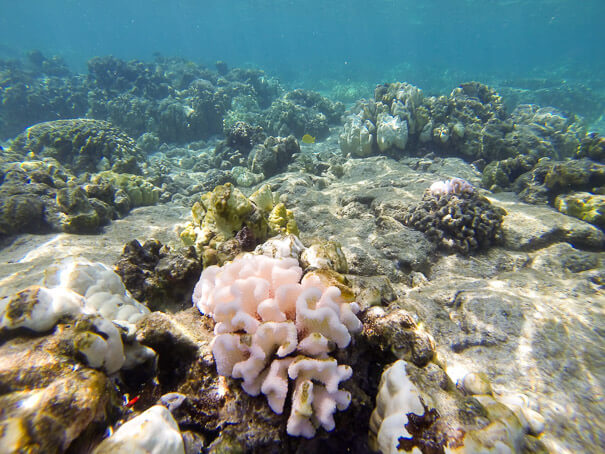 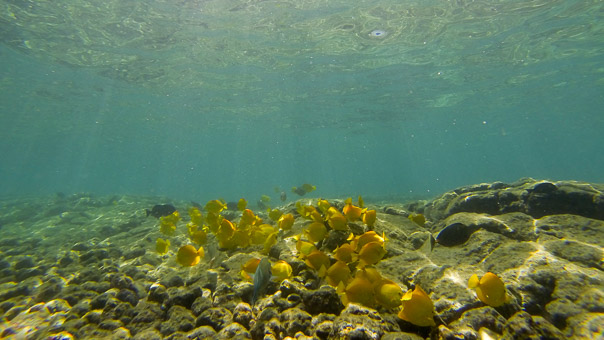 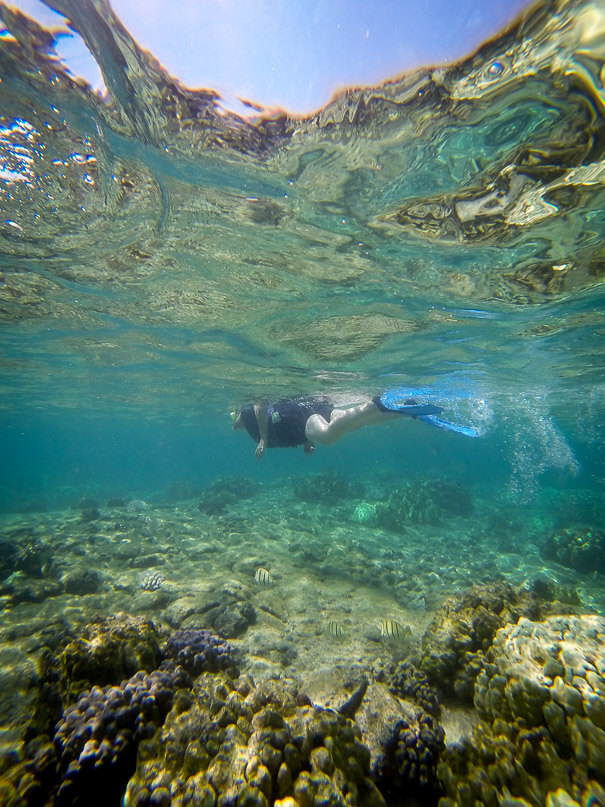 After the second swim of the day we headed back home for a BBQ to finish off some of the food we had in the fridge. We cleared up a good load of food, took a dip in the pool, I got sunburnt (just what you need before a long flight home) and then we finished the packing.

Once packed Sharon and I took another dip in the pool and then we sorted ourselves out and headed into town for dinner, just as the sun was setting. 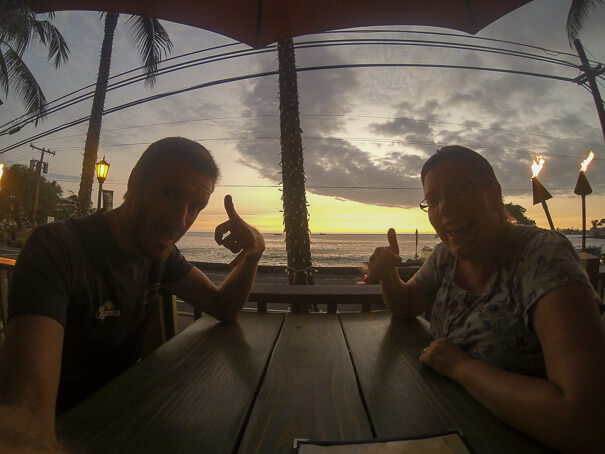 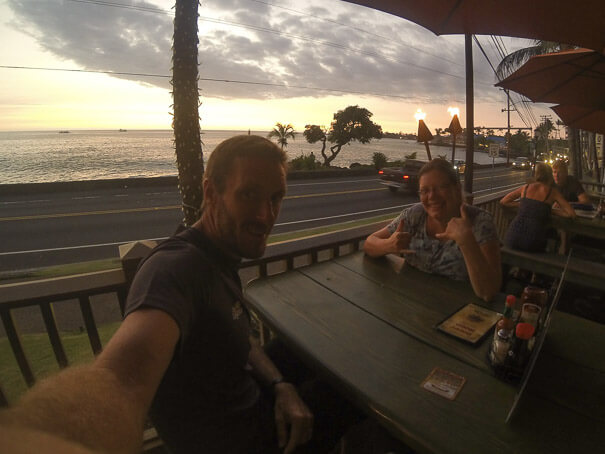 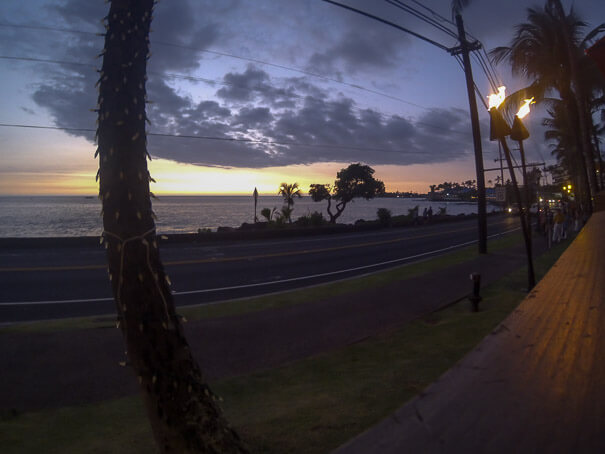 We then headed to the airport, returned the hire car and checked into our flights. There were a lot of Ironman people on our flight and plenty of bike boxes being checked in. I’m sure the baggage handlers are looking forward to things calming down soon.

Once through security was caught up with George, a UK competitor who we’ve met a few times over the last couple of weeks. He’s also been blogging whilst in Hawaiiand it’s been interesting to read the thoughts of someone else about being here. There’s been about four or five UK folk regularly blogging whilst out here - I wish there were more - at least there should be a few post race reports to read in the coming days as I enjoy reading about what others think of this place and race. 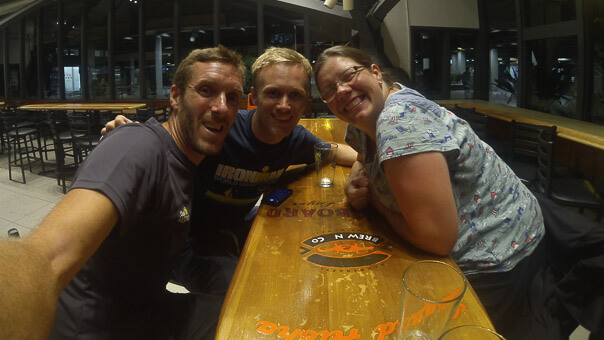 The flight left at 10:25pm. We’re then heading to Los Angeles, then to Dallas and finally on to London. We did a ‘two change’ return last time to avoid a nine hour layover in Los Angeles (we’d just rather be ‘moving’) and fancied the same again this year, but using a different airport (Dallas) ‘mid-journey.’

Right now as I get ready to hit the ‘publish’ button it’s Friday afternoon (this blog is really about Thursday) and Sharon and I are at Dallas Fort Worth airport after 5.5 hours to LA and 2.5 hours to here. We’ve got about 9 more hours in the air before we land at Heathrow.

Once again this has been an unforgettable trip and we’ve had an amazing time. It was a different experience doing ‘Kona’ for the second time - not worse, not better, just different. We spent 21 nights in Hawaii and feel ready to come home. We’re looking forward to wearing a few more layers of clothes (including my new ‘trucker’ caps) and relaxing over pint or two at the local sailing club.

One of the sad things is that the 30 second walk to the ocean from our condo is going to take all of two minutes when we get back home. We can still hear the ocean (the cold English Channel) when we go to bed though.

Race report to follow in the coming days… and possibly a video as well.