Hmn, this report is a little late so it’ll be brief! With the announcement of a race called the ‘Felpham Five’ - which is a five mile beach run very close to our house I decided to try a beach race for myself. I’d run a trial run of the five mile route for our local race and it was fun but I wanted to see what a beach run was like in a race-type scenario.

So we headed all of about 4 miles from home to Littlehampton for the running of the Arunners Beach Run. This was an evening race and the weather was pretty good. Rain had been forecast and there were some mighty black clouds over the hills of the south downs - but thankfully they never arrived.

Starting with a small lap of a field and then up onto the promenade and then down onto the beach the fun began! The tide was out (which is rather handy for a beach run!) and it was very wet. The sand was that ripply type the holds plenty of water. There were patches of seaweed as well to content with - but thankfully no rocks. 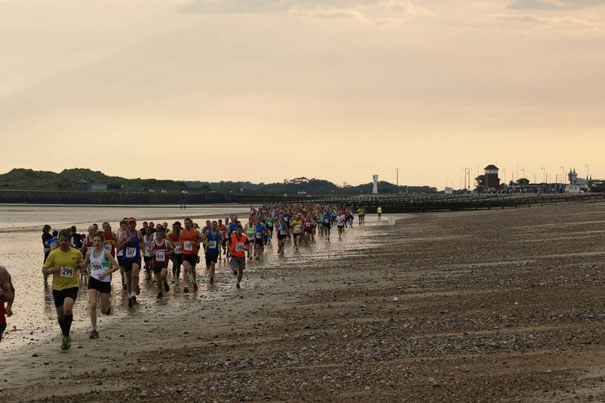 It was wet, it was messy and then after a about 1.3 miles you run up the beach and a horrible shingle area and then run about 1.5 miles on grass and then it’s back down the beach for the return journey. I didn’t realise how much the beach running would take it out of me. I was shattered and were were only 3 and a bit miles in (the race is 4.75 miles - according to my GPS).

It was tough, really tough. There was a strong field of runners and by the time I got up to the finish (after running up more stones up to the promenade) I felt destroyed. Sharon said I looked terrible!!

I crossed the line in 73rd place with a time of 32:22 (the winner finished in 26:33). It was one hell of a tough old race. And I was filthy from the salt water and sand that covered my legs.

Straight after the finish I saw Ben (the race director of the new Felpham Five event) and immediately offered myself as a volunteer for his race - anything not to have to run!!