Right then, this blog is overdue a little update I’d say. I did sneak in a post about getting to my 500th parkrun a couple of weeks ago but other than that all has been suspiciously quiet - mainly as I think I’ve retired from this long distance nonsense.

After Kona in October 2015 I thought I’d have a year or two off. I did. It was lovely. There’s far too many distractions around the house, with the local sailing club (I’m on the committee there) and going windsurfing! Anything but triathlon. Well… I’ve been running and cycling a bit, but not too much.

I did a couple of small triathlons very close to home (i.e., within half a mile of the front door!) and trained for the Brighton Marathon in 2017 and 2018 - both scuppered by injury. Training went pretty well for Brighton 2018 until I tore my calf muscle the day before - I’d been and registered and everything! Doh.

I did enter a half iron-distance race in May 2018 - the Swashbuckler. I’d barely run (as the Brighton Marathon that I pulled out of the day before was only five weeks before and I was resting my poor calf). But I had a good swim and bike and struggled on the run.

We went to the Swashbuckler with our good friends Allen and his wife Kirstee. He’d done Ironman UK in 2017 and had entered it in 2018. We suggested that a non-UK Ironman would be a great thing to do, and that the ‘pirates’ were going to Lanzarote in May 2019. He then said….

Oh bugger. Retirement over. Sort of. 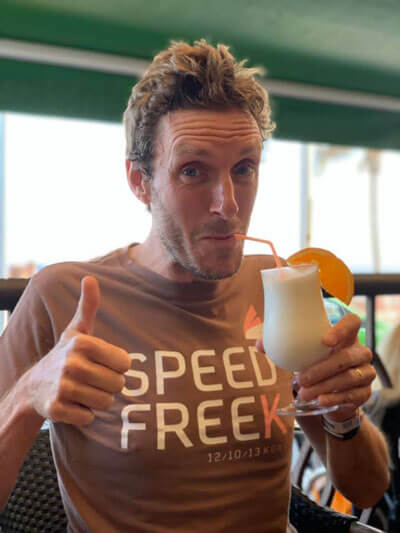 Grand plans were put in place. I bought a smart bike trainer (they’re not that smart as you still have to pedal) and attempted to follow a bike training program for a few months. It was hit and miss but I did ride a fair bit (in the garage) over the winter to keep my fitness up.

As the sun started to shine (and the race date started to rapidly approach) I got outside for a few long rides. I managed one ‘100 miler’ and a few shorter rides. I rode some hills. A bolt snapped on my aero-bars a week before flying to Lanzarote - I bought a replacement part and had to replace the gear cables on my bike. I even changed the cleats on my bike shoes - the bolts were rusted to the shoes. Oh, and I bought a new cassette for the bike to give me an extra gear (as I am getting old) - I’m now riding a 53-39 up front and a 12-30 at the back (rather than 11-28). Everything other than myself almost feels new and fresh.

Swim wise (you know I love swimming) I joined our local pool and bought a book of “12 swims for the price of 10” in April 2018. So… here we are in late May 2019 as I write this the day before Ironman Lanzarote and I’ve still got six swims left on the card. Oops. I did swim 3k once so that’s good.

Running had been going well until February when I managed to pull (or do something) to my right hip flexor. A few weeks off and a trip to a chiropractor got me back to being able to run. I’ve run two 12-milers and managed a total of 204 miles so far this year. An average of 10 miles a week. Hmn…..

We flew out to Lanzarote on Tuesday morning. It was more middle of the night as the flight was just after 6am but we’re here. I registered for the race on Wednesday morning and then Allen and I rode 30 miles of the course (one of the hilly bits - it’s all hilly - at the top of the island). We felt good. Especially after the huge burger and beers we had in Teguise after the ride. We met up with a good friend of mine from my windsurfing days - he lives here in Lanzarote and owns a couple of restaurants - it was great to catch up with him. It’s been too long. 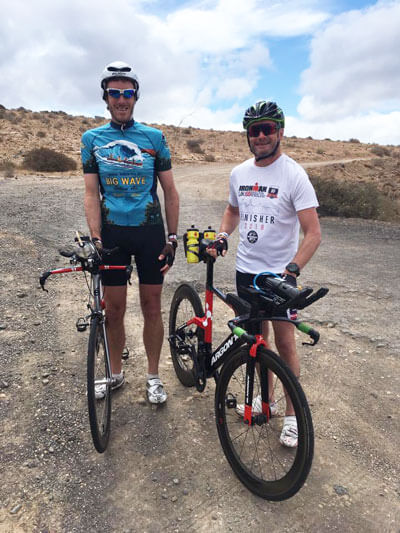 Before getting almost blown off of the road. About 100 times!

On Thursday morning we went on a guided swim of the course. It’s a two lap swim that totals 3.8km. We swam one lap. Before the start there was a chat about starting positions, tides and currents. It was really useful. Kenneth Gasque - who setup Ironman Lanzarote back in 1992 came along and wished us luck. He’s a bit of a legend when it comes to Ironman and he’s being rewarded with this in Hawaii this coming October he will be inducted into the Ironman Hall of Fame - well deserved. The swim was great and we were joined by Bart Aernouts (2nd place in Kona 2018) and his coach (and previous two time Hawaii winner) Luc Van Lierde who also chatted to us and spoke about this weekends race. 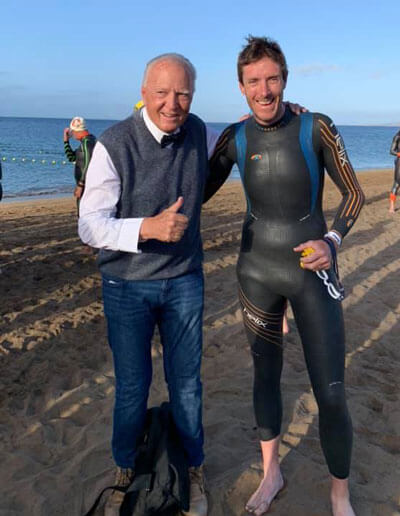 The weather was a bit cloudy for the first two days but since then it’s been pretty much wall to wall sunshine. It’s hot. It’s also ridiculously windy. This is my fifth trip to Lanzarote and I’ve not known it so windy. On the bike the other day some parts (going downhill into a headwind) were terrifying. I just have to be careful on race day and hope people around me are careful too. I just need to get to the run in one piece. Then it’s a run, jog, walk, shuffle and crawl to the finish. That’s the easy bit!

Apart from all that doom and gloom that my training has been, as I sit here on Friday afternoon (the race is tomorrow, Saturday) I am excited to get started. I’m hopeful of a swim that’ll be just under 1 hour 20 minutes. If my bike is 6-6:30 then if I run a four hour marathon I’d be finished in hopefully around 12 hours. I’d be very happy with that. If I’m an hour slower I won’t care either. I just want to finish with a smile on my face. I won’t be smiling later in the run - that’s guaranteed but will at the finish. Sharon will as usual be a nervous wreck during the day but she knows I’m relaxed about it and will do whatever I can that I have control of to be able to finish. She’s helped get me to the start line and she’ll be there at the finish for me. Thanks.

I’m also really looking forward to popping into a tiny little English pub/bar that’s a couple of minutes walk from where we’re staying. We went in there last night for a pint and I cheekily said to the landlord… “I hear that if you do the Ironman and come in on Saturday night with a finishers medal you get a free pint.” He looked at me, had a think and said “yes, we can do that”. Someone then leant over from the other end of the bar and said “I’ll buy you a pint as well if you finish.” So I’m all sorted for post race drinks! I will get that pint and take a photo. Stay tuned.

My race number is 1211. There’s a tracker on the Ironman website (hopefully this link works). It’ll be a long day. I’m really excited to be toeing the line again - and especially wearing pirate kit (there’s over 20 of us pirates taking part tomorrow) and I’ll do my best.

See you on the other side.