So… we’d been doing a few training runs in readiness for a relay race in September and things were going well - and then I saw online that the London Marathon was going to be a “virtual race” this year (unless you’re Kenyan whereas you get to run laps round a park in London instead).

This didn’t interest me at all - until I saw that everyone gets a technical tee shirt and a medal if you finish. And it is only 20 pounds to enter. Bargain.

So, thinking of training… normally it would be nice to have a good three-week taper after building up the mileage. This clearly wasn’t going to be possible, so I decided to just increase the miles every week, pretend I’m training for a 50-mile run or something like that and just do a 26.2 mile run one week. Perfect. 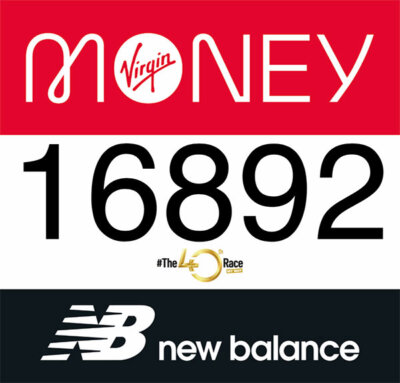 An official running number came through the post and I’d wear it on the day - just in case I see anyone else wearing a number and be able to give some mutual support. I’m sure there were going to be a few Tone Zone runners out and I planned to run at least the final few miles (up to ten perhaps) on the promenade close to home so it would be a good place to spot other idiots out running.

Where to run the first 15 or so miles was playing on my mind. Recently I’ve run West towards Pagham and East towards Worthing. The latter is a much clearer route without too many road junctions and pavements to trip you up, so this was probably going to be the plan.

Now the weather…. let’s just say that the words Storm Alex repeated over and over on the news were not what I really wanted to hear. I’m getting text messages off of my windsurfing buddy asking if I fancy a Sunday morning sail. Yes, I’d love one, but I’m planning to go out for a bit of a long run instead.

Time targets… in reasonable conditions I think I’d be capable of somewhere around 3 hours 40 minutes - so the plan is to run with that in mind. I don’t really care if I end up being an hour slower, I’m just treating it as a (very) long run but with a bit more thought put into drinks and energy gels than usual.

What time to start… We both wanted to get going early and suspected that we wouldn’t sleep particularly well - the howling wind and rain when the sea-front and beach is 100m in a straight line from your bedroom window makes us partly exposed to the elements (this explains why everything outside of the house goes rusty overnight - “it’s the sea air” apparently!).

An alarm was set for 5:30am. We woke at 5am. I didn’t want to head out in the dark as there’s no streetlights for a good section of the route I had in mind and it wouldn’t get light until after 6:30am. This gave me time for coffee, porridge and final race weight movements (yes, plural!). I put a couple of drinks bottles by the front door for later collection and took two with me, holding them like wrist weights. 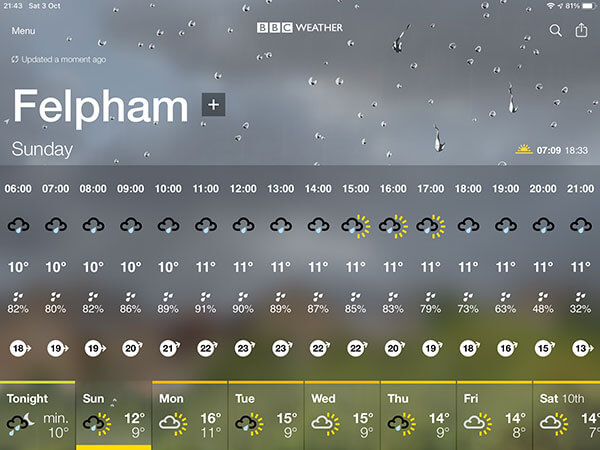 I liked the simplicity of this. No trains or car journeys to the start. No hanging around. We walked out of the front door, and three or four minutes later we were running. 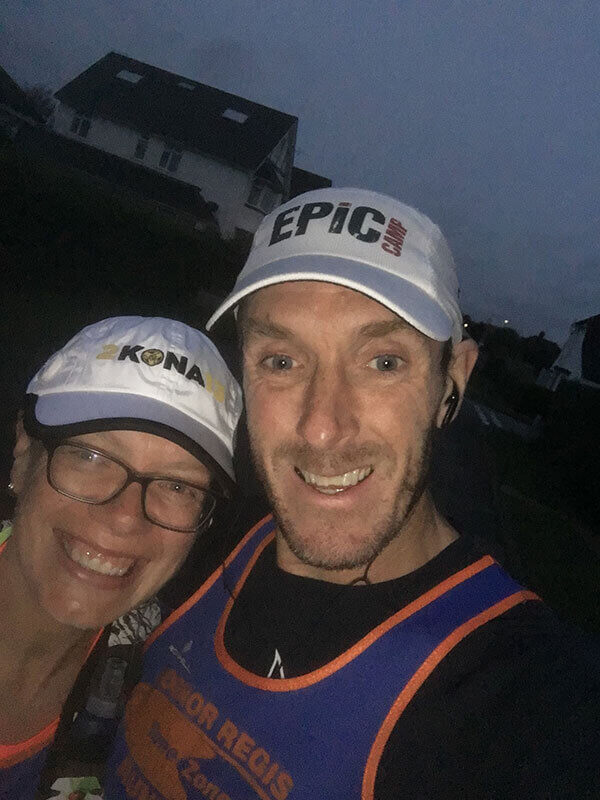 London Marathon provided an official smart phone ‘app’ which would be used to track your time and distance using the GPS on the phone. My faith in the app was at rock bottom levels, especially as it was only made available about three days before the race and we also had to update it again the day before! Oh, and there was no opportunity to a practice run or anything beforehand. The London Marathon Facebook page was filled (and still is) with people complaining about the app.

Sharon and I lined up at the start line - an imaginary line on the seafront promenade and set off at 6:49am. The weather was a bit breezy and the odd bit of spitting rain. It could have been much worse, and as I write this at 3pm the same day I’m bloody glad I’m not out there right now - the weather is truly fowl.

With a strong wind forecast (and quite clearly here right now!) I didn’t want to spend too much time on the sea front running into a headwind. The first 10 miles of the route would be mostly with a tailwind to just past Littlehampton. I’d like to get to about 10 miles, then head back home (another 10 miles, this time with a headwind!), pick up a new water bottle and then find 6.2 miles locally, but ending with a lovely 3 mile tailwind run along the promenade home.

I set off quite quick - nudging under 8 minutes per mile for the first couple of miles. I felt good. If you’re fit enough (or think you are) to run a marathon then you should be good for the first few! I eased off slightly and got into a rhythm. Before long someone came running past me - it was one of the speedy runners (Christo) from our club who had a marathon number on. Good stuff. It was lovely to see someone else wearing a number. But would I see many more?

With it being early on a Sunday morning, windy and a bit wet the pavements and promenade areas were not busy - just a few runners and dog walkers out and about. For entertainment I put on the IM Talk podcast (the only one I listen to) and just got on with it.

At around 10 miles I turned around and had to contend with an above 20 miles per hour headwind for a few miles. The headwind was ridiculous along the Littlehampton seafront. On the plus side I did see quite a few other marathoners which really did give a motivational boost. Sharon was one of these runners and it was great to see her - especially as she’d been grumbling about a poorly hip lately. I saw our friend Kirstee who was taking part and headed towards me. I’d seen her husband (Allen) a little while beforehand.

Out of town and back on the long road back to Felpham/Bognor. I’d deposited a drinks bottle a few miles ago and on this out-and-back section I would collect it again after finishing the one I was carrying. Thankfully the bottle was where I’d left it and I carried on, sipping a little every now and then. I saw Allen for the second time.

My energy gel ‘strategy’ was to have one at around 5 miles, 10 miles, 15, 19, and about 22. I normally have some very old out of date gels from Ironman days but today all but two were in date (as in sometime this year!). A couple were best before 2018 but in my terms that’s pretty much A-OK.

At about 19 miles I found myself back home - but in a good way - to swap out a bottle for a fresh one. I’d drunk about 750ml so far and thought another 500ml would get to 26.2 miles. On a warm day (today was about 10 degrees c but with a ‘feels like’ temperature of around 7c) I’d drink a fair bit more than this.

As part of “operation avoid the bloody headwind on the seafront” I headed inland. Took a gel (this one was a ‘mocha coffee’ one - which was so thick it was ridiculous), washed it down and then ran through the local village churchyard - blowing a little kiss to my mum as I passed by.

I did consider running into Hotham Park to do a few laps of the Bognor Regis parkrun route but with all the lovely trees in the park there I didn’t want my GPS to under-measure and make me run any further than I had to. So I avoided the park like the plague.

I wanted to get to around 23 miles before heading back along the promenade home (with a lovely tail wind). Due to an earlier miscalculation (marathon brain) I did a loop (about half a mile) of one of the local ‘gardens’ in Bognor (I saw Allen again, loitering) and then headed back onto the promenade. Not before having my final gel - this time a double espresso flavour. I think it was double-thick as well - and was even worse than the last one.

I saw a local bootcamp type class taking place and all the people stopped to give me a little round of applause/encouragement. When I said I only had three miles to go they were impressed. To be fair so was I. Wearing a number was such a great thing to do. I saw a few people out windsurfing off of Bognor Regis Sailing Club. This was a good sign that it was windy. But not ideal for running.

Back along the promenade in Felpham there was great support for some other runners - they had banners and all sorts. They gave me a good cheer as I went by.

The last mile seemed to take forever but eventually my watch beeped 26 miles and after yet another slight miscalculation I found myself back into the headwind for the final few hundred metres up the promenade. It wasn’t quite like turning into the Mall in London after 26 miles but as a sense of achievement it was right up there. This was self supported, in miserable weather, on your own.

I looked at my watch as it said 26.22 miles and that was it. I stopped my watch, then had a little sit down on the promenade wall. About a minute later Andrew, a friend who lives close by, appeared and took my official finishers photo! 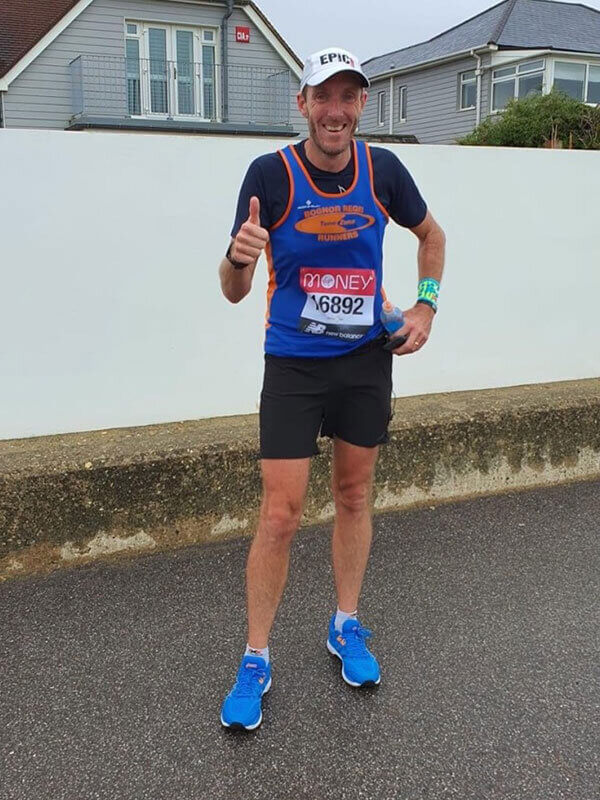 My watch time said 3 hours 35 minutes and 11 seconds. The official app said 3 hours 32 and 24 seconds (using the GPS on my phone). I’m probably going to go with my watch time as I can at least see that overlaid on a map - the app doesn’t seem to provide any such capability to see exactly what it recorded.

Could I have run faster? - had I trained more (I hadn’t even thought of taking part until five weeks ago) then no doubt yes. I could have had time for a proper taper as well. Instead this was just increasing long runs over the past few weeks. I didn’t destroy myself out there today, I ran within my means, but 26.2 miles was plenty enough. The balls of my feet hurt (they’d been hurting since about mile 10) and I’m just not used to being on my feet for this amount of time.

I’m super pleased to have completed another marathon - this is my fifth standalone marathon - the last one being 2013 in London. In a few weeks time I should get a medal and t-shirt through the post - which quite frankly was the only reason I entered the race in the first place!