In 2019 I took part in this four person relay race from Worthing to Brighton of (approx) 10 miles each. I only did it as there was the promise of a burger at the finish. The burger was lovely and I wrote about it (and the run that led up to it) in last years blog.

This year the organisers worked really hard to ensure that the event could be run in a Covid-19 secure manner and with everything that’s been going on the world it was great that the event was able to take place.

One of the members of our established relay ‘dream team’ from last year was unable to run this year so we had a vacancy - which I ‘encouraged’ my wife Sharon to fill. This years run was from Brighton to Worthing (so in reverse to last year) and we’d all run the same legs as last year - but obviously in the other direction. So if last year the leg was downhill, this year it would be uphill. That kind of even things out, right?

Unlike last year we decided to do some training on the route in advance - to remind ourselves of the hills that make up the South Downs Way and to help with navigation. We didn’t run the first leg in training, but ran leg 2 (Allen), leg 3 (mine) and the final leg (Sharon’s) twice. We were so much more prepared than last year - and hopefully the hill training would help.

Race day dawned, in fact we were up before dawn with a bloody 4am alarm clock on a Saturday. It’s a bit like Ironman’o’clock. Breakfast was consumed and off in the car to the David Lloyd club (a gym) in Brighton for the 6:30am start (Kirstee was off first at 6:42am as part of the wave starts that were in place for this race). 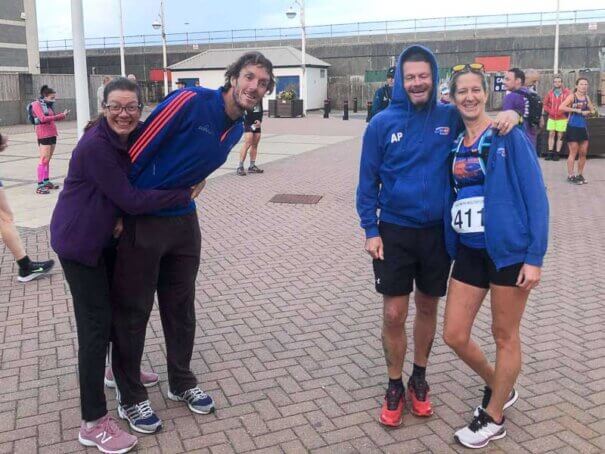 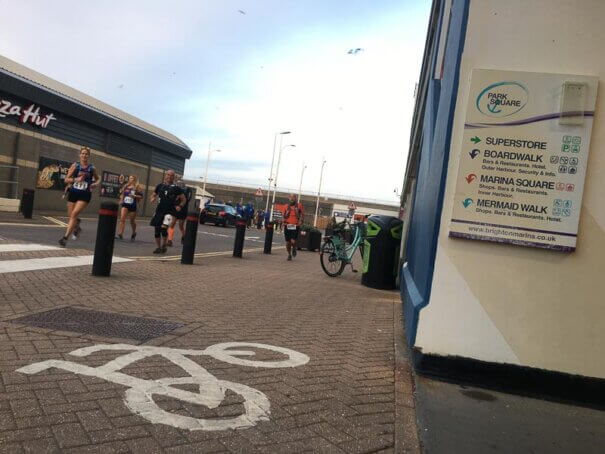 Kirstee (far left) heading for the first turn after the start… through a car park!

The weather was fresh but due to warm up and with a bit of a headwind for most of the days running. Kirstee set off first and that was our cue to get in the car and head off to a rendezvous point a few miles away on the climb out of Brighton.

A stunning sunrise up above Brighton 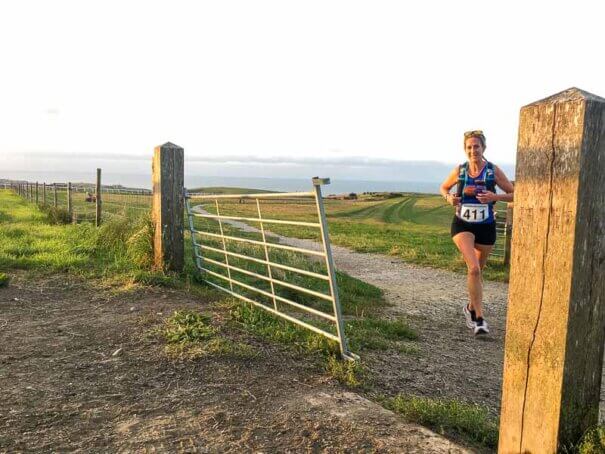 We saw Kirstee twice during her leg and then drove up to Ditchling Beacon for the handover to Allen. We squeezed into the last available space in the tiny car park and waited. It was still pretty cool up on the ‘Downs’ so it seemed sensible that Allen put some arm warmers on. Sharon ate her breakfast (cold Ready Brek) and I helped water some bushes as a result of some excellent pre-race hydration!

Before long Kirstee made the switch to Allen and away he went. 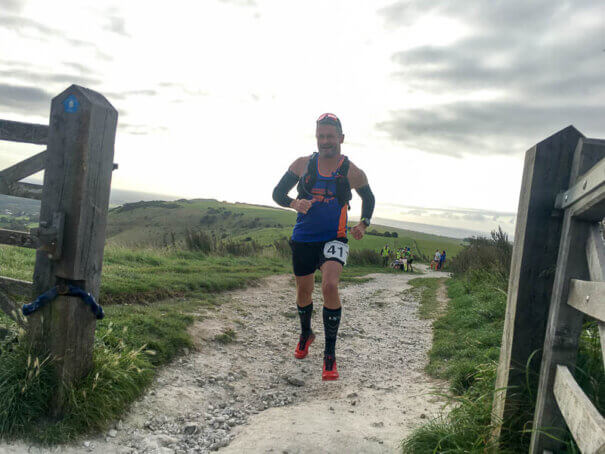 We then headed back to the car to then work out where we would see him mid-way during his leg. We worked out where we saw him last year (going the other way) and headed across to Devils Dyke.

As he came running by the temperature had really warmed up - which is why Allen shouted to me “Watch out… Incoming…” and threw his arm warmers in my direction. He was looking strong and headed off for the final few miles before handing over to me.

Back in the car again and off to the start of leg three (my leg). I think we only had about 10 minutes to spare after arriving but I was able to do a couple of minutes warm-up, get my running backpack on (containing the essential list of things you had to carry - such as space blanket, water, dry clothing, printed route map, hand sanitiser and more) and got ready. I knew my leg would be hard work (it’s a fecking nightmare to be honest) so opted for a Bjorn Borg style headband to absorb the sweat that was going to making a presence before long.

Allen appeared from over a big hill and before long he’d crossed a busy main road and made the handover to myself - with a “Covid secure” elbow bump! 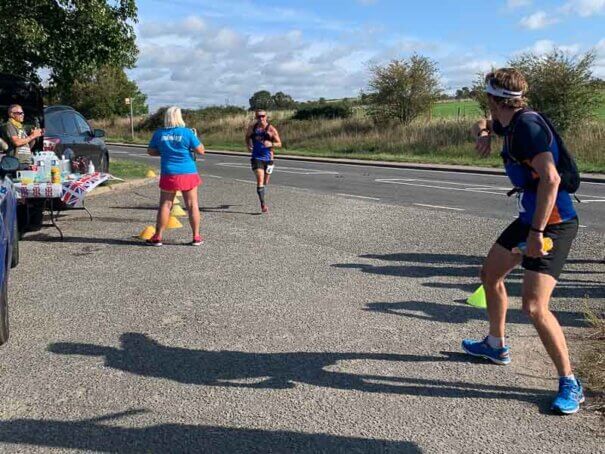 My leg was just under 11 miles. With five out for the first five and a half pretty much being straight uphill. It was nasty. We’d run it in training (which was good as this time I had a good idea of what I’d let myself in for) but oh it was tough. I overtook a few people in the first mile (perhaps I was being a little over enthusiastic) and then the climbing began. At this point I had to try and pace myself - especially as I knew there was a monster of a climb at about eight miles in.

For the next few miles it was literally a case of pushing up the hills and constantly keeping a very close eye on the terrain, as it was ankle twisting underfoot conditions pretty much every step you took. That’s the beauty of off road running - it’ll make or break you! I was hoping for the former. 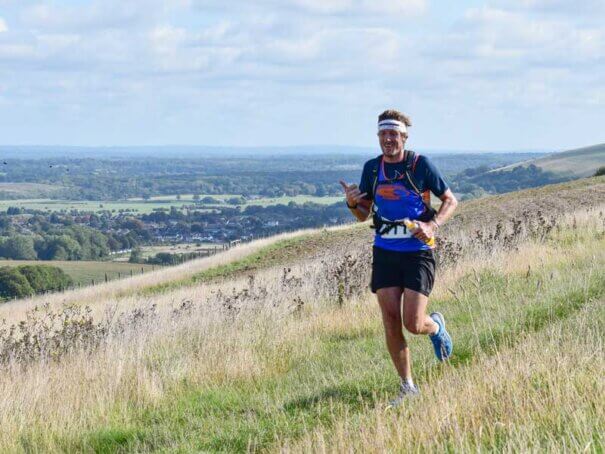 Just before six miles in you then get a very steep downhill section. I had to run down here - very carefully - and at the same time trying to avoid the stream of people on mountain bikes coming up the other way - some riding, but many more walking as it was so steep. You then head onto a road section for a short while which was most welcome. At this point I saw the rest of the support team (Sharon, Kirstee and Allen). They asked how I was doing and my only response was that it was so much harder than when we ran the leg in training (as I didn’t stop every few minutes for a rest!) - this was non stop fun/punishment.

Shortly after seeing the others I began the final climb. This is about a mile long at an average gradient of 8.9%. At about a third of the way up I somehow managed to take a tumble - I think I just tripped over. I made a good stunt-man type roll, emitted a bit of a loud groan and got myself up and continued heading uphill. A minute or so later I caught up with another runner - who then ran up the hill with me. We chatted a little and it turned out he was the leader of the 41 mile race - chapeau.

Eventually I made it to the top and then it was (just) a little over two miles to the finish of my leg (at Kithurst Hill) and the handover to Sharon for the final leg. 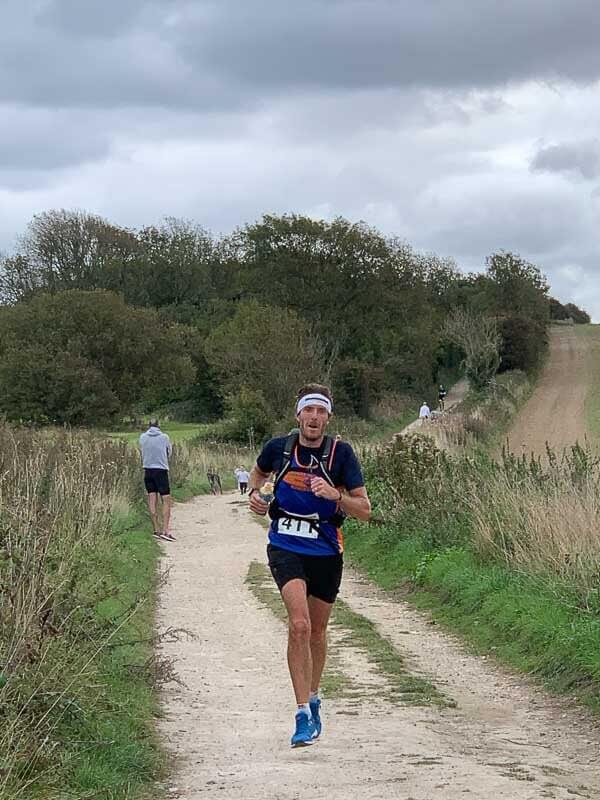 I pushed on to the handover point and my GPS recorded a time of 1 hour, 30 minutes and 33 seconds for 10.9 miles. My heart rate averaged 170bpm for this - which for 90 minutes is quite some effort, and my pace was 8 minutes 17 per mile. I was very happy with this and I felt I’d certainly earned myself a burger at the finish! 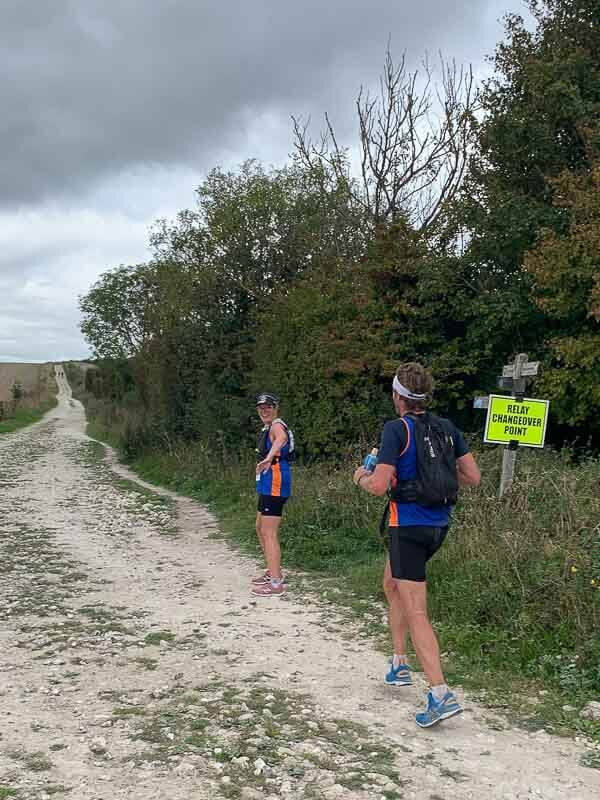 Sharon set off on the final leg and we headed in the car to find a point a few miles away to cheer her on. Before long she came by looking strong. As a relay team we were doing well. Kirstee, Allen and myself then headed off to the finish in Worthing (at the David Lloyd club) to await Sharon’s arrival. 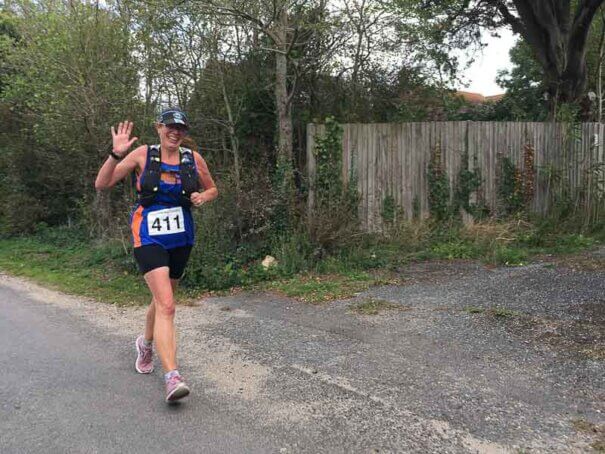 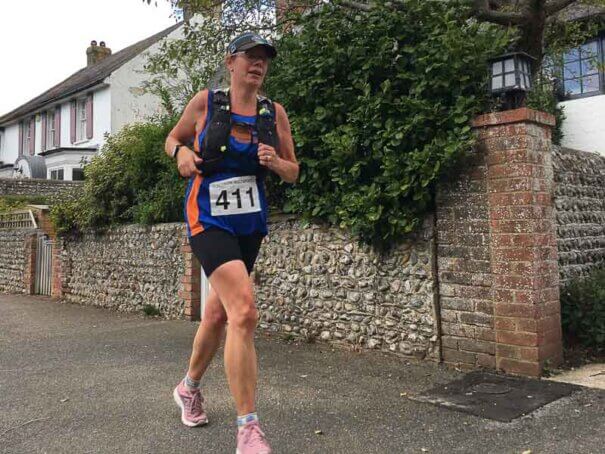 Before long and with the help of ‘find my friends’ we knew she was nearing the finish so were there to cheer her in. The weather was lovely and sunny and the finish and post race ‘area’ was in one of the outdoor tennis courts at the gym. We were then able to collect our medals and the all important burger voucher. Burgers were cooked to order and hit the spot perfectly. 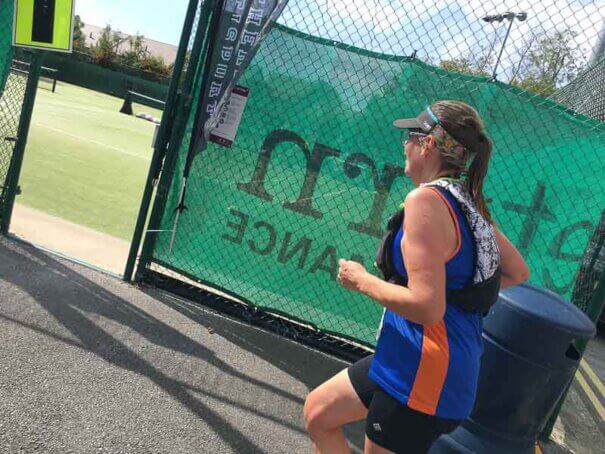 Our total time for approximately 41 miles was 6 hours, 17 minutes and 38 seconds. We were the 10th team home and the third mixed team.

We’re only in it for the burger.

After getting home and having a little snooze we headed out as a team for yes, another burger!