By David on 9 April 2007 david triathlon 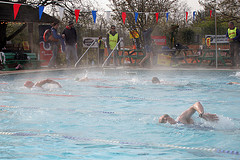 Easter Monday is a day that you rest and feel guilty about all the chocolate you’ve been eating the past day or two. Well, not in this household! Sharon was up at 6:20am to go to work, and I got up shortly afterwards. Why you ask? I’ll tell you why - to go spectate at the first race in the Thames Turbo Triathlon 2007 series of races that are not far from where we live.

En route I picked up Danny and then Kirsty, and headed to Hampton Open Air Pool. Now that we’ve started swimming on a regular basis, and I know how to ride a bike, the idea of this morning was to have a look at what goes on at these events and think about whether we’d be good enough to enter one. Well, I can firmly say that we are. Any swimming stroke is acceptable, you don’t need to do “tumble turns” at either end, and you can stop for a breather if you wish. The swim is 426m, about 17 lengths of a 25 meter pool.

You then have to go grab your bike and cycle 21km. I don’t have a racing bike, and neither did many of the people competing. All I’d need to do to my bike is get some road tyres on it and make sure the gears and brakes are working!

Once the cycle is over then you have to run a 5k race. For me this will be the easy part, followed by the cycle then the swim. The event today seemed really friendly and we bumped into a few fellow runners we know from our running clubs and the Saturday time trials which was good. I took a few photos of the event this morning (mostly of the swimming as that was more fun to watch) and they can be found at davidrowe.co.uk.

So, the upshot of this is that both Kirsty and I have now entered race three of the Thames Turbo Series, being held on Monday 28 May! What have we let ourselves in for…