So, today was the day of my first Thames Turbo Triathlon. I was up at 5am and eating a bowl of porridge by ten-past. After leaving home in the car (with my bike on the roof rack) we picked up Danny (who was supporting) and the three of us headed to Hampton Open Air pool. Registration was simple - show your face and you’re in! Especially with the weather we had - around 7 degrees and strong strong wind and rain. It was bloody horrible. Ho Hum. 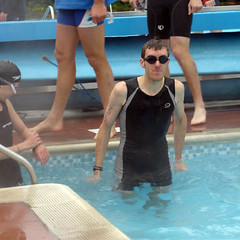 After getting my bike “racked” in the transition area and ensuring I had everything (shoes, socks, glasses, number) in the right place for after the swim it was time for the 6:45am briefing. Shortly afterwards it was time to queue up for the start (I was in the first “wave” of swimmers), and by about 7:10 I was in the pool and off. After shivering in the cold air the pool was delightful. I was really enjoying it. 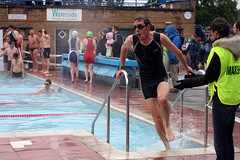 At the end of the first length I managed to swallow a mouthful of water which wasn’t particularly pleasant, so was coughing and spluttering a bit before I could settle back into a rhythm. I had to be conscious to pace myself in the swim, as I had the cycle and run ahead of me. Throughout the swim I could hear support from the likes of Sharon, Kieren, Stuart, Nicola and Danny - which was most appreciated.

A few minutes later it was out of the pool and into “transition” (getting ready for the bike part), with the clock still ticking. I fumbled a bit with my shoes and socks - I guess I should have had elastic laces after all. With cold hands doing a double knot and tucking in the laces so they don’t get caught in the bike chain took a bit longer than I’d hoped. Then it was on with the wind-sheeter jacket, attach my race number and out onto the bike route. 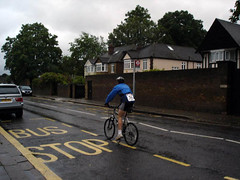 I don’t have an expensive racing bike but I do have a pretty decent mountain bike, and together with some road tyres it was pretty quick (at least by my standards). Maximum speed on the bike was just over 30km/h (around 19mph) and although I was overtaken by a handful of guys on fast (and no doubt very expensive) racing bikes, I overtook about the same number of bikes as well. The route was rather scenic, and you had to have your wits about you because of the speed bumps and huge puddles from the rain. It was extremely windy on the course, and you are not allowed to draft off of other cyclists - otherwise you get a time penalty.

After finishing the bike route you have a 7 minute “non-compete zone” where you cycle back to the bike-run transition. I took this opportunity to get my legs spinning fast in a low gear to get the legs ready for the run that was ahead. At this point my shoes and socks were soaking wet because of the puddles and rain, so not the greatest for running.

As I was ready for the run (i.e., I didn’t have any fancy clip-on cycling shoes) all I had to do in transition was rack my bike, remove my jacket and gloves (I should have removed the gloves earlier as that cost me about 15 seconds) and get running. Running is my favourite and strongest of the disciplines and I was looking forward to this. 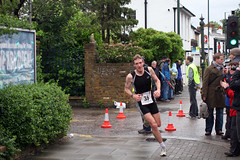 My legs didn’t feel too bad going from bike to run which was good. The first km was run in about 4 minutes 24, which was slow but understandable as you have to stop and go through a gate at one point as you head into Bushy Park and also because I’d just been cycling and wasn’t settled into running. Once settled it was easy to find a strong pace and push on. The next kilometer was done in about 3:45 which I was very happy with. Nobody had a chance of getting past me and over the 5k’s I overtook maybe 7 or 8 people - what a great feeling. 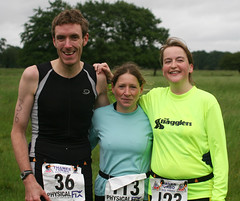 My “support team” was there at just after the 2k and 4k markers and then at the finish - and boy was I happy to get over that line. It was then straight off to cheer and watch Suze and Kirsty who were both on their running legs.

After they finished it was back to the pool for a well earned sausage and egg baguette, and some flapjacks made by Kirsty. Lovely.

My times and positions were as follows…

I’m very happy with this result - especially with my 5k time of 21:06 (including transition from the bike). Although only 233 people finished, there were around 380 entrants, but I guess the terrible weather put them off. My ‘el-cheapo’ triathlon suit from Aldi supermarket held up, and I think I’ll be putting it to good use in race 4 of the Thames Turbo Triathlon Series in August. Bring it on :)

Finally, it was great to have plenty of support around the course (and photos from Sharon, Stuart and Kieren) and also from the marshals who volunteer to help, get soaked through in the rain and still cheer you on. Amazing effort. Thank you.