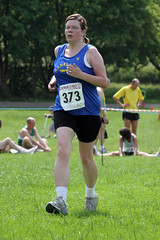 Hello Sharon here! I made it to the start line this morning after a few horrid days of foot pain (I will be getting it investigated this week) culminating in tears on the train home from the Derby yesterday thinking I couldn’t run today. I had a plan though, I would run if there was no pain this morning and also if the first mile was alright. Both boxes were ticked and I was off. I was advised by a friend not to run today and maybe I shouldn’t have but I know I have a few weeks off racing now, until July 1st in fact, so I will hopefully have a good chance to rest!

I ran much of the race with John, who I know from Bushy Park Time Trial but somehow I ended up over-taking him about 6 and a half miles in, which was very odd. I “blame” it on the Lucozade Carbo Gel thing I had at 5 miles (although I need to work on getting it into my mouth without dribbling it down my top, shorts and leg)…

There were quite a few nasty hills but I didn’t stop and walk once, not even during mile 8-9 when I knew there was apparently a hill to be reckoned with. This combined with my “wheels falling off” between 8-9 should not a good combination have made but I was OK, I kept plodding on.

The foot held out, didn’t cause me pain at all really during the race but afterwards I am now a bit limpy but in less pain than I was yesterday. I dunno. I am thinking it is possibly linked to a sore hip and time for new shoes.

Now, onto the timings. I finished in 1:54:14 (by my watch as it took a while to get over the start line), which the eagle-eyed amongst you will have realised isn’t a PB. This is the first race I have run and not got a PB. You might think I am down-hearted about this but nope. I ran a race that last night I didn’t think I would be able to as my foot was so painful, it was hilly, it was baking hot (and I really prefer the cool and even a bit of light rain) and I was only 2minutes 7 seconds slower than my first 10 mile race. Oh and as an aside, “Well Done” to Danny Boy with his trophy and “Well Done” to Kirsty who got a PB and also managed to avoid David taking photos of her by running so fast, must have been that new top Kirsty!

So here’s to the next 10 miler (probably the Cabbage Patch Ten in October)…and before that a nice rest sailing, running and mountain biking….did someone say rest?