No BPTT update from me this week as I had chosen instead to run in the Baker Cup, which is one of five Ranelagh Harriers handicap races taking place each year. The following explanation is pinched from the Ranelagh Harriers website: 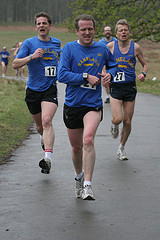 “The Baker Cup is a 3 mile handicap on the road, which brings to a close the current cross-country season. Runners are given a handicap allowance dependant upon their ability, with the slowest runner going off first, and the remainder following at 10 second or greater intervals. The fastest runner, the ‘scratch man’ goes off last. If everyone runs to the form predicted by the Handicapper, Mike Rowland, then they should all finish together. The winner receives the Baker Cup, which is presented at the annual prizegiving, and is held by the recipient for one year. Medals are awarded to the second and third, and also to the three fastest men and three fastest women. The Baker Cup was first competed for in 1911, having been presented to the Club by Fred W Baker in 1910.”

As I am slow, I was the second adult to set off. I had almost 3 minutes to catch up on the runner ahead of me and was very very aware that very shortly I would be being hunted down by the other 30-odd runners. Also in front of me were some younger runners who were all “guests” and hence not eligible for the cup - although I didn’t know this for sure at the time, as they were not sporting the usual “G” on their backs.

The course is only two laps and only 3 miles long but was still pretty tough. The hill up to the Royal Ballet School, into the wind, twice, was enough to turn my legs into the consistency of jelly! The best (or worst!) bit is that there are 4 turning points in the race, so you can see how close people are to catching you. Quite disconcerting.

About 2 and a quarter miles in I finally managed to catch the runner who had gone off before me, who gave me a cheer of encouragement as I passed her. At this point, it briefly flashed through my mind that I might be in the lead. I pushed that thought to one side and pushed on up the hill. 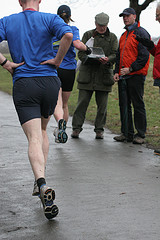 Soon enough, I was at the final turning point, which was about a quarter of a mile from the finish line. I could see how close the runner behind me, Andy, was - and I know how much faster than me he is. I tried my absolute best and dug in deep. I was aware of someone shouting to me that Andy was just behind me - it turned out that the “someone” was Paul Sinton-Hewitt who organises the Time Trials we are such a fan of. I then heard David’s voice positively bellowing that Andy was right there. I pushed and pushed and thought the finish line would never come. Then it did and it was over. I almost collapsed in a heap - Andy *did* collapse in a heap. I was shattered. Then for the best bit. Someone told me I had won!! I had won the Baker Cup! I could hardly believe it. I have tried to work really hard on my running for the past year and this is certainly a good reward. 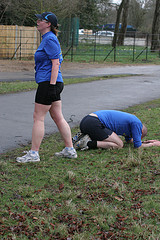 The official results show that I had won the Baker Cup by a margin of only one second! Yikes! In reality I think it was less than that…

The only sad thing is that I shall not be at the Baker Cup Supper and prizegiving this weekend, as we are elsewhere (more on that next week). However, my Ladies Captain Marie says she will collect the trophy for me. People keep telling me what an amazing trophy it is, so I look forward to seeing it and polishing it for a year. Photos of it will no doubt follow if it is as spectacular as I am being told it is…

A number of photos from the race can be found at our photography website.