This past weekend saw us visiting my parents on the south coast of England and to take part in the 2008 Bognor Prom 10k road race. This was going to be my fifth year in succession running this race and it has to be my favourite 10k race (and course). I’ve steadily improved over the past five years and I hoped that on Sunday I’d be able to continue the trend.

Because I’ve wanted to improve each year on this course I had planned to target my training towards this race but injury in March ruled that out. My plans shifted from getting a PB (personal best) to getting round in as close to 40 minutes as possible (my 10k PB is 38:57 - from July 2007). I’ve had about four weeks of reasonable (albeit low 20-mile-per-week) training but still felt that this was achievable.

Sharon and I were joined at the race by fellow club runners Danny and Kirsty - Danny having finished 8th last year and Kirsty, a first timer to this race - as she’s normally taking part in the Green Belt Relay during this weekend.

Saturday night dinner was spaghetti bolognaise, and Sunday’s breakfast was porridge, washed down with the ever faithful Lucozade sport drink! We then made our way to the start.

This is very much a local 10k race, and the number of club runners is much less in comparison with many other races (take the Elmbridge 10k as an example of a ‘club runners’ race). Because of this there was plenty of room in the starting area where I took position around the 40 minute estimated time mark. Danny was ahead of me, and Kirsty and Sharon somewhere behind.

As the start gun went (it took me all of about three seconds to cross the line) I chose not to get carried away with any tussles and racing in the early part and just settle into a comfortable pace. I hit the 1k mark in 3:48 which was slightly faster than planned but early enough to make amends. It’s funny as this first kilometre felt really easy and I could have run much quicker (but then again, this is a 10k race and not 1k!). 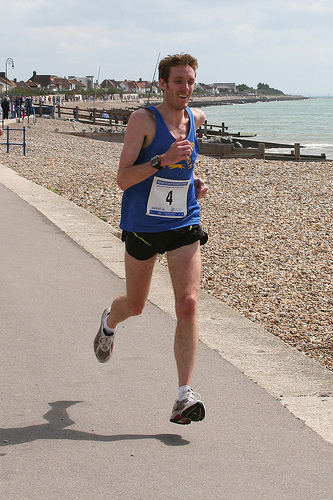 As we headed east through Bognor Regis and towards Felpham village I just settled down and overtook a few people, albeit gently. My mum was just past the 2k mark (she was marshalling) and my dad at about 3.5km.

I went through 5k in 19:45 - I would have preferred it to have been nearer to 19:30 but as much of the first half is running into a headwind I was OK with how things were. Shortly after 5k the runners head onto the promenade for the final 4.5km back to the finish. At this point the sun was shining, the tide was in, there were lots of people supporting and everything was good - well, apart from me busting-a-gut in this race! I didn’t really get into any individual races with people although I do remember running alongside Epsom & Ewell runner Mark Alden. He glanced across, saw my club vest and new that I was from his neck of the woods (South-West London) and offered a word of encouragement. After a brief ‘grunt’ of acknowledgement I then slowly drifted ahead of him.

As I ran past Felpham Sailing Club (where I’ve been a member pretty much since about 1985) my name was announced over the tannoy/loudspeaker system to lots of cheering and applause - it was great (for about 5 seconds!). A little further on I passed my dad again (who was on ‘camera duty’). From here on in was a long and extremely tough slog to the finish. I slowly but surely edged forwards and crept past a few people - in fact I don’t believe anyone overtook me at all in this race after the first km which I was very pleased with. I also know that I didn’t look over my shoulder to see behind me at all during this race - what’s behind is behind me, I’m only interested in what’s ahead. 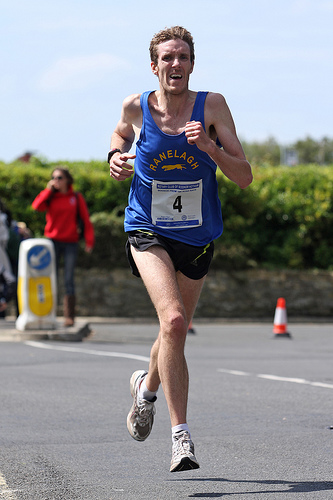 The course is jam-packed with supporters for the final 800 meters or so which is really uplifting, and as I crossed the line my watch was 39:17 - ten seconds quicker than last year. I’m very happy with that. My time was 20 seconds off of my personal best (from the Elmbridge 10k last year) and to be close to my 10k best time is really encouraging (although I know I should really be much faster). I finished in 54th place out of 1302 finishers which I certainly cannot complain about.

Out of interest, my splits are pretty even (there’s about 16 seconds discrepancy in there because of the difference in distance from my GPS but generally it shows that I was pretty consistent.

Now, over to Sharon…

Sharon here now…so after several weeks of poor training and a shocking half marathon last weekend, I was what you might call a tad apprehensive about this race. I had a conversation with ‘Coach’ on Wednesday night which said something along the lines of I wanted to finish under and hour and I was kind of planning on doing 2x 29 minute 5k’s, as that should have been achievable given my current level of *ahem* fitness.

The day started in the usual way with my usual pre-race bowl of oats-so-simple, made in it’s usual specific way. I am so pernickety. Before we knew it, we were off to the start line (all dressed in blue, a first!). After a gentle, short warm-up, Kirsty and I decided we needed a final visit to the portaloos. We had minutes to spare and realised we hadn’t said “good luck” to David and Danny. So we raced off to find them at the front, then I dropped Kirsty off in the correct spot, did a ninja start line move (!!) and found my way to the right pen.

We were off. It took me almost a minute to get over the start line. David had warned me it would be a bit windy in the first half and to take it easy. I felt pretty comfortable to start with which was good. My Achilles wasn’t bothering me, which was great and nor was my ankle, also great. The wind wasn’t too bad actually but there were a couple of km’s where I was definitely slower (as you will see later from my splits) and I think it must have been the wind. There was lots of support on the course from friends from our sailing club, as well and David’s mum, dad and family friends too, which was nice. Can’t say I was looking my best for them though! 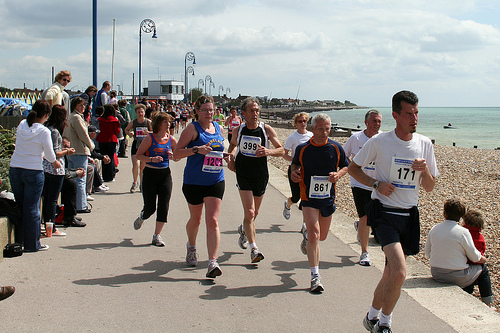 Not a lot to say really about the race. It was windy to start, then it was hot and sunny. The only bit of the race I can really remember in detail was the final third of a mile. I had started to try to catch people who were fading (must get woman in silly teeny shorts, then catch woman with annoying jingly keys and so on) and next thing I heard Kirsty shouting at me to find more. A little further around and there was David shouting at me not to look at my Garmin and to catch the man in the stripy top. I am pleased to report that I did as I was told. LOL! I felt quite sick when I crossed the line, haven’t felt like that in quite some time. I removed my chip, got my medal and went to get a drink. By this point David had found me and we had a little, “how did you get on” chat. He was pleased with his course PB I think. Me too.

I’m pleased to report that my finishing time was 58:05 - a long way outside my PB (by over three minutes) but good off the back of the last few weeks. What is interesting is looking at my position compared to last year. Last year I just scraped into the “top” 75%, this year I finished 864/1302, meaning I finished just in the top two-thirds. A big improvement. Don’t you love how statistics can be manipulated to say what you want them to…

See you on the Prom next year.

As for the others - Danny, returning from injury after his recent 2:40 time in the London Marathon, finished in 12th place which was a great run - well done mate. Kirsty ran just inside of 50 minutes - three and a bit minutes outside her best time over the distance but after recent injury trouble she was happy with the time.

Some more photos from the race can be found at our photography website.