Today it is seven weeks away from the 2009 London Marathon and many people who are training for the event are putting in their longest runs around this time (normally in the region of 18-20+ miles).

A few weeks ago Roger W. suggested to a few of us runners that we have a little group run in Bushy Park a few weeks out from London. His description was as follows:

Similar to the parkrun ethos, its free, its simple and just for fun (well, unless you’re chasing a personal best time and running hell-for-leather!). We also wanted it to be low key so it wasn’t really advertised outside of a small group of people.

So this morning, the skies were blue (it was a little windy though) and was ideal weather to go and get a long run in. Sharon and I set off to Bushy Park and arrived just before 9. After a group photo we set off at all our different paces and got going (with a number of other runners joining in along the way)… 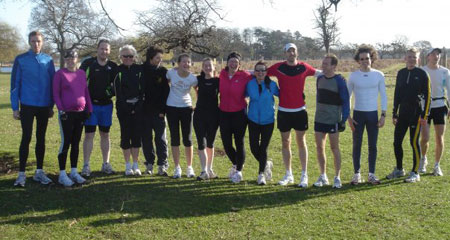 It was good fun doing this ‘out and back’ type course as you kept on seeing the other runners and their encouragement really helped.

My running recently has been terrible in regard to marathon training because of a problem with my left knee. I did manage a couple of 7 mile runs during the week and although I should be doing 20 miles today I would have been happy with anything above 10.

At the end of my fourth ‘lap’ (about 12.5 miles in) most of the others had finished running and were enjoying a little picnic on the grass. As many of us ‘runners’ came past you’d get an almighty cheer and clapping from them. I’m not sure what the other park visitors thought we were all up to.

After grabbing a quick drink from the car I continued running but had to give up about half a mile later. So, just over 13 miles done - which was great compared to my recent training (and after a good 50+ mile bike ride in the Surrey Hills yesterday) so I was happy with that.

As for my London preparation its not so good, although I don’t plan on any kind of taper before the race (which gives me an extra 2-3 weeks training when you compare to normal marathon schedules) but it’s still looking touch and go as to whether I’ll make the start line.

Yes, its a nuisance but my number one priority for this year is the Ironman triathlon I’m doing in July. I would love to have run a marathon before I do it as part of the Ironman but maybe I’ll have to wait till ‘race day’. Ah, the lure of the unexpected… could be fun!

As for Sharon’s run - after not running much at all in January/February the plan was for something really easy - so after running the Bushy parkrun 5k yesterday just running two days in a row was something that she’s not done in a long while. After the first 5k she retired to the picnic area and helped support everyone else out on the course, which was most appreciated.