Here’s the first post from ‘race day’ at Ironman Switzerland, starting with the pre-race and swim… 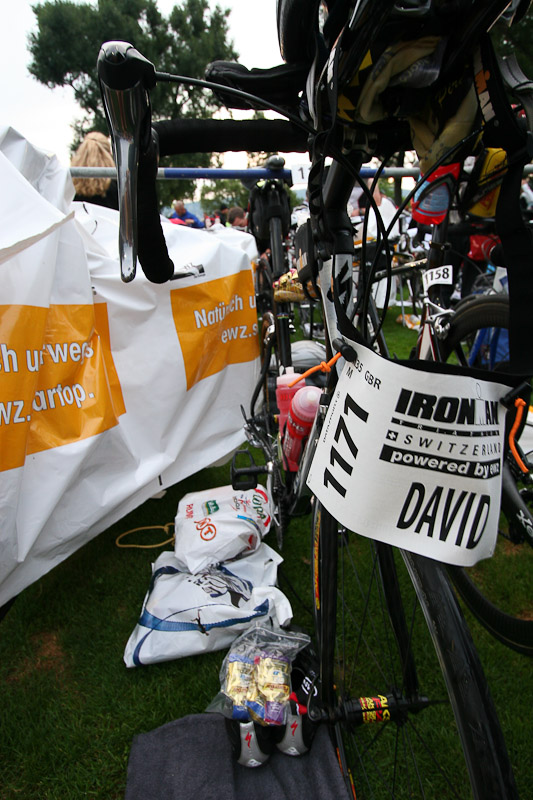 My bike, racked and ready in transition.

After a 4am alarm call I was down having breakfast at 4:30am. The breakfast of choice was porridge with sugar, followed by toast and washed down with coffee. We then gathered my things for the day, I put my tri-kit on and put on plenty of sun-cream.

Sharon and I then walked down to the transition area where I sorted out all my gear, putting gels, Powerbars and drinks onto my bike, getting my bike shoes and socks ready, and preparing my running gear (shoes, socks, hat) for later.

I had my running gear in a plastic bag in case it rained over the next 8/9 hours or so until I needed it!

Whilst I was sorting out my gear, Sharon rushed to the lakefront and took some absolutely stunning photos. 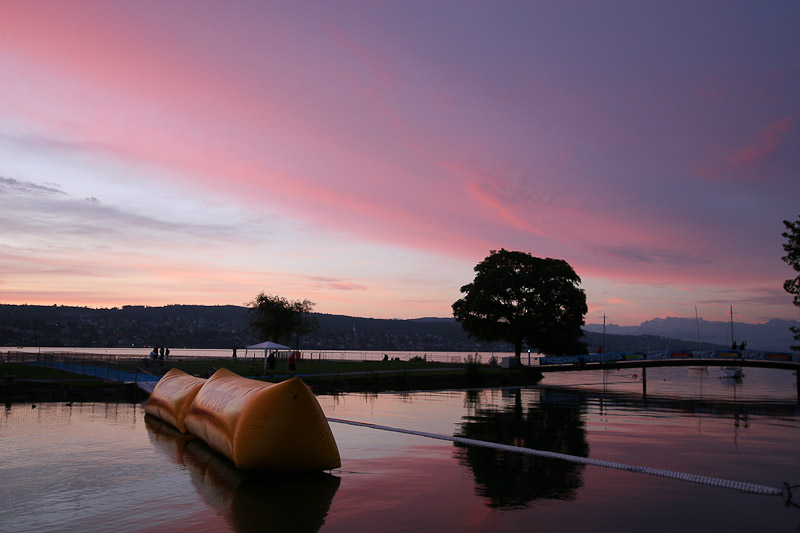 At the same time I had the other camera in the transition area and took a few photos - here’s one of people preparing. 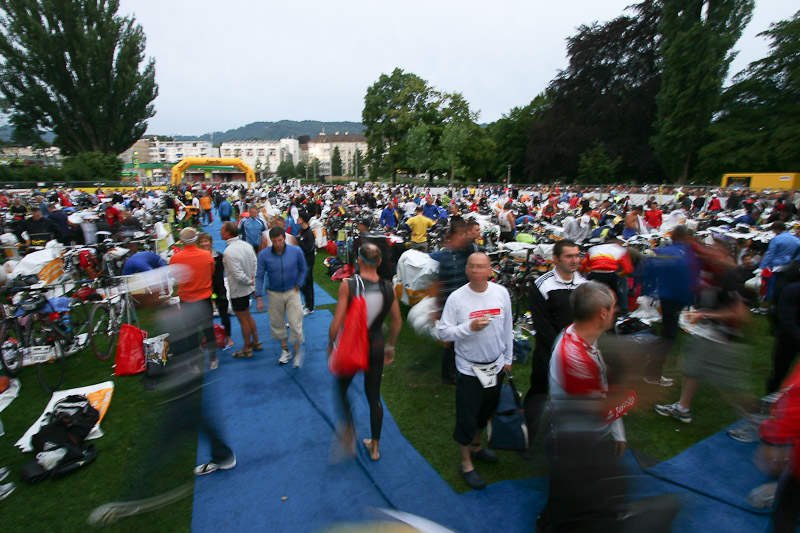 Hustle and bustle in the transition area.

Looking at the race maps the far end of the beach was where the men and womens start were divided by a virtual ‘line’. My plan was to start there and stay clear of as much trouble as possible as I’m not a fan of mass starts. 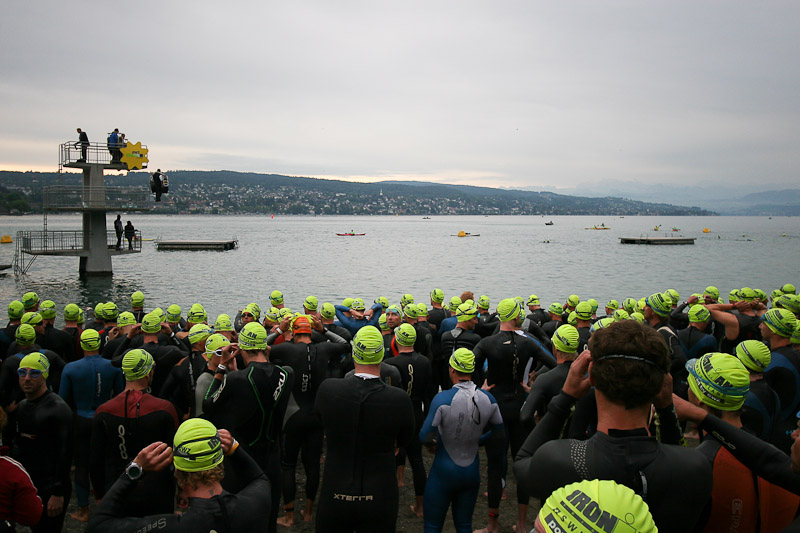 Minutes before the start of the swim.

After visiting the portaloo’s by transition and chatting to an American couple who were both taking part in the event Sharon and I headed to the beach area. En-route I stopped to put my wetsuit and swimhat on, have an carbohydrate/energy gel and then I joined a bit of a queue (through a gate) to get to the beach. At this point I knew it was all for real and I was about to race an Ironman event. The beach was busy with athletes and spectators and we both walked to the far end. It was now just before 6:55am at this point. As I turned to face the water there were hundreds of athletes standing on the beach - a helicopter hovered above and the announcements were saying that the professional race (which starts at 6:55) was about to get underway. We heard the start, I kissed and hugged Sharon and then walked onto the beach. In the swim you are just another person, with no identity. Everyone pretty much had a black wetsuit on and we all had the same swim-cap. We were then allowed to get into the water and swim out to the deep-water starting area.

I swam towards the women’s starting area (in the plan it would be quieter). I heard the 2 minute warning, then the 1 minute, and then it was GO GO GO. It was busy, but didn’t seem as busy as the start of the Bala triathlon a few weeks previously and I very quickly settled into a comfortable pace. There was some touching going on but nothing extreme. 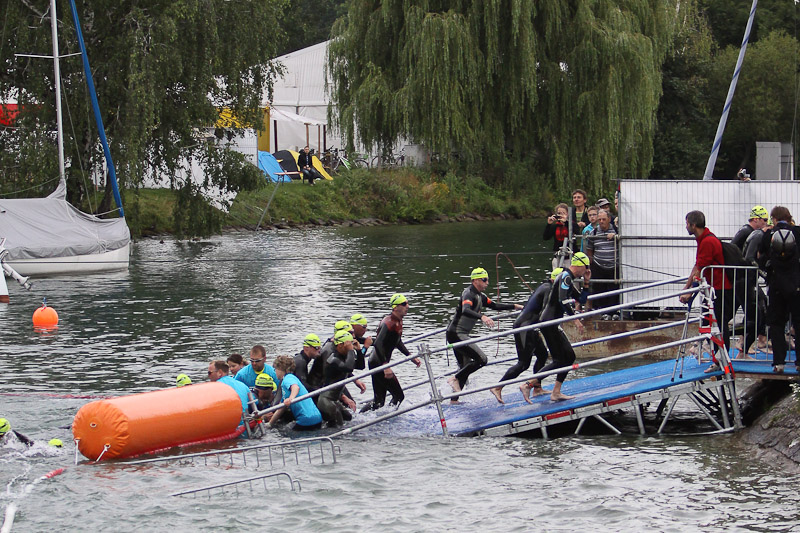 At the end of the first lap of the swim.

From here I just ploughed on and swam the first lap of the course. At the end of the lap we all have to come out of the water, run/walk across a small island, then its back in the water for a slightly longer second lap. As I crossed the island I saw a ‘Go Pirates’ sign and shouted the same. I saw Aitch screaming out support which was great. I jumped back into the water and continued.

The second lap seemed a bit busier - I spent much of it swimming very close (a couple of feet away perhaps) to two or three others. On the way back to the shore I swam a very straight line (that is, if the marker buoys were in a line!). About 100 metres before the swim exit I decided to really get kicking with my legs - a technique I’d read to get the blood moving so that you feel less dizzy as you get out of the water and run to transition. 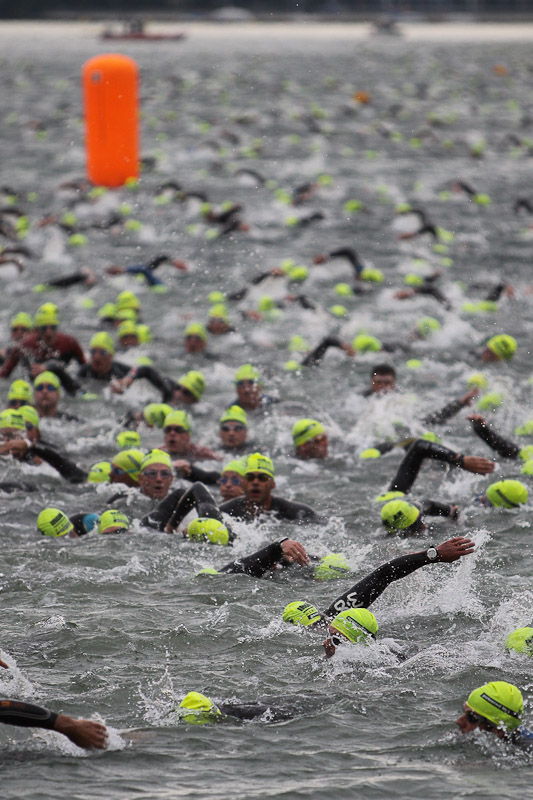 Heading towards the end of a lap. The reason people are looking up is to ‘sight’ - to see where they’re headed. Its not like a pool with lines on the bottom!

It was a great plan but after about 5 seconds I got cramp in my right calf, and then the left calf. It was hideous. I had to turn around, crouch in the water whilst holding my feet to try and alleviate the pain. I couldn’t outstretch my feet because it hurt so much. After maybe 30 seconds I had to get on with it and swim to shore, although I don’t think my leg technique here was the most efficient.

In my recent lake training swims I was doing about 4.4km in 1 hour 18 minutes. Convert this to the 3.8k Ironman distance (2.4 miles) and we’re looking at about 1 hour 7 minutes or so. My official swim time was 1:08:25 which I was extremely pleased with. I swam well within my means the entire way round in order to conserve energy for later. A great start. 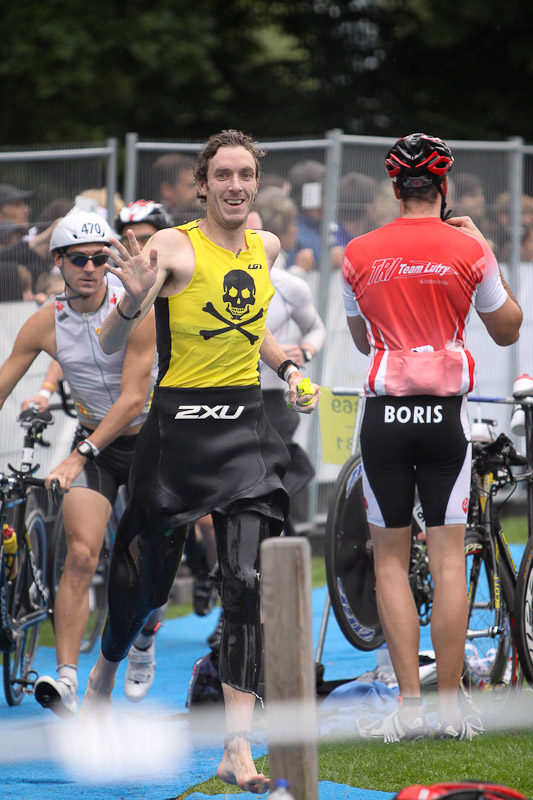 Running to my bike after the swim.

As I headed out of the water I immediately started to unzip my wetsuit and get it down to my waist. I knew exactly where to head and ran easy straight towards my bike in the other side of transition. I saw Sharon in the distance and waved at her then turned to my bike. Turn GPS on, wetsuit off, helmet on, socks on, bike shoes on, stand up, grab bike and go.

My T1 time was 2:16 which was pretty good going. It was 10 seconds quicker than the Bala triathlon and I’d say there were pretty similar length transition zones.