Firstly, if you’ve not seen the pre-race or race day - swim entries, feel free to do so to get a little background on how I got to here. 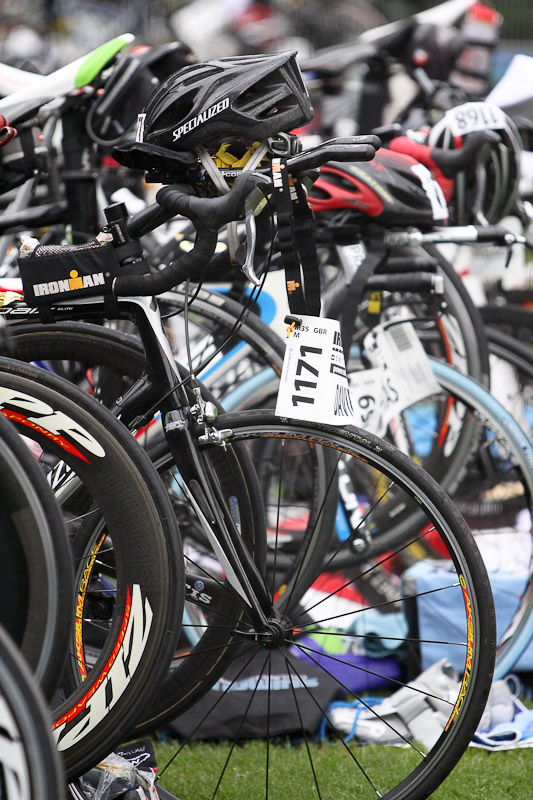 My bike, before its 112 mile ride through the Swiss countryside.

After coming out of the swim and transition I was feeling good. The swim wasn’t hard work (apart from the cramp at the end, which did worry me a little - as I wasn’t sure how it would affect me on the bike) but I was feeling good and ready to pedal a ‘few’ miles.

The bike leg was a two lap course with a total of 112 miles of cycling. The profile showed that there would be a total of 1260m of climbing across both laps. Not flat, but not too hilly either. As someone told me before the race, they thought it was a “fair” course.

As I headed off onto the bike I knew the first 18 miles were flat as we rode along the side of Lake Zurich. It was busy, and at times I was very close to the middle of the road as I overtook two or three people to my right. As I pulled in front someone else would overtake me and this cat’n’mouse game would continue for much of the entire bike leg. About 10 miles in I narrowly missed a crash. Two guys about 20 feet in front of me going about 22-23mph clipped wheels and they both fell down and slid along the road. Looking at my GPS logs my heart rate jumped and my speed dropped for a few seconds. There were marshalls very close by and I waved at them but they couldn’t have not heard it - the echo’ey sound of a full disc wheel sliding across the road sounds, er, how should I describe it, er, expensive!

I pushed on and overtook Nicola shortly afterwards. I cheered her on (and got the same in return) and continued on my way. At about 18 miles we turned inland where the course gets a few hills and turns/roundabouts in it. It was fast paced (at least for me) and my was to keep my heart rate just above 130 BPM as much as possible on the flat sections. At about 22 miles in I saw Stuart (Hollywood) in the distance and caught up with him. We exchanged a few words - I remember him saying that Duncan had passed him a few kilometers ago and I moved ahead. 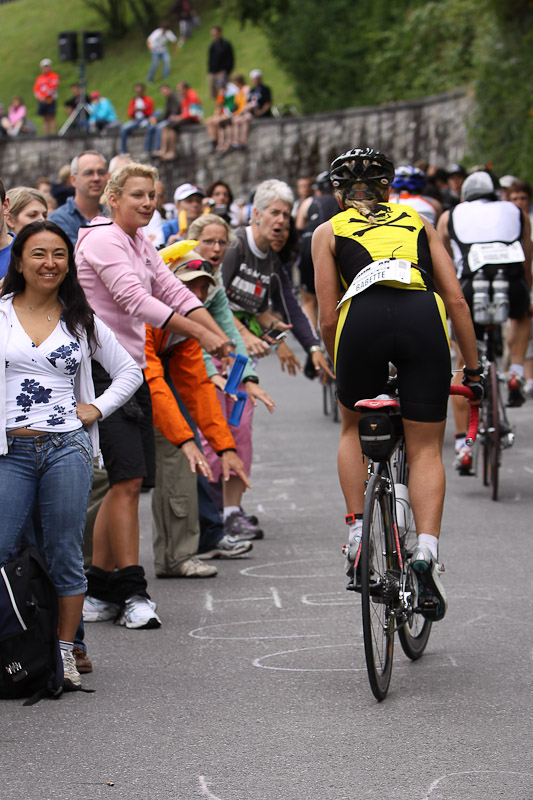 Now seeing Stuart worried me. Although I beat him at Bala this year over a half-IM distance race I didn’t expect to see him so soon. I honestly believed that I would maybe catch up with him early in the run, and then later on his Ironman (IM) experience would get the better of my ‘rookie’ status and he’d get me back sometime after 20 miles. When I went past him early on the bike I thought that I must be going to fast. However, I felt fine, and just continued. It turned out he’d missed the start by a minute or so and that helped explain why I saw him so early on. A few miles on I caught up with, and passed, Duncan. At this point I was first Pirate! Eeek.

There were a couple of long uphill drags (but the support from locals shouting ‘Hopp Hopp Hopp’ was great) - and the corresponding downhills seemed to be much steeper and last a lot less - you just raced downhill for a few seconds and then it was flat/bumpy again. We soon (about 43 miles in) turned back to the lake waterfront and headed back to the start/finish point and past it towards ‘Heartbreak Hill.’

I’d ridden up the hill on both Friday and Saturday and it wasn’t that tough, especially when compared to the earlier hills. On top of this it was the main spectator spot on the course. At the final turn I could see Pirate supporters ahead and I knew Sharon was in there somewhere. I stuck my arm in the air from a distance and they saw me very quickly. Riding past them was awesome - the cheering, the screaming, the support, it was ace. 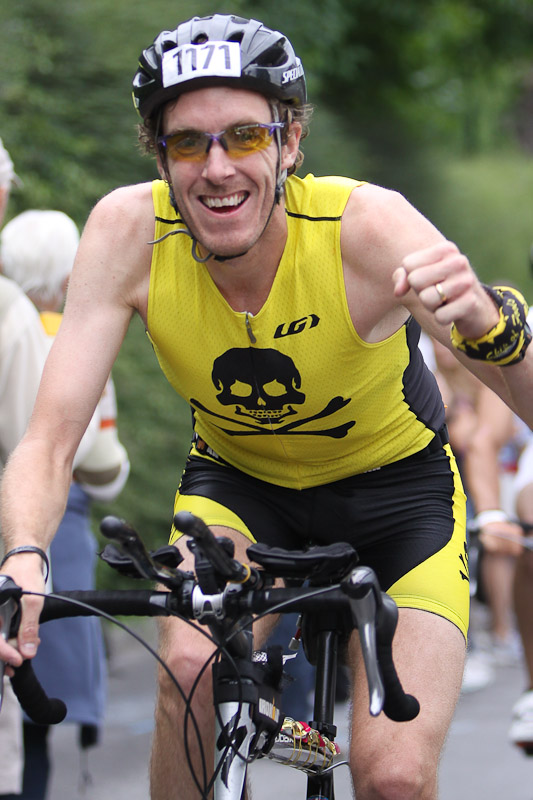 Heading up Heartbreak Hill on the first lap.

As I passed them the road narrowed and as I headed to the summit the crowds filled the road ‘Tour de France’ style with it being just wide enough for single file cycling towards the top. It was crazy. I gave it my best pirate ‘Aaaarrrrrrgggh’ and got plenty back!

Over the top of the hill and it was a fast downhill and then back to the start/finish area to start the second lap. My first lap time was 2:41:27 with an average speed of 20.8 miles per hour. Average heart race was 138 BPM with a maximum of 166. I was 776th fastest on the bike for my first lap.

During the second lap my speeds started to slow slightly. My heart rate remained steady but I was just a little bit slower. I guess tiredness was catching up on me. I was happy to remain at this speed as one of the most important things in a race of this length is to get to the marathon run in good shape and not be exhausted from the swim/bike legs.

Once you get on the bike you need to start eating to prepare yourself for the marathon you’re going to be running later in the day. I had some flapjack with me (lovingly made by Sharon), together with four gels and a couple of powerbars. I also had two large bottles of Powerade on the bike before I set off. In total on the bike I believe I had 7 gels, half a banana, 3 Powerbar bars, some of the flapjack, plenty of Powerade drink and some water. 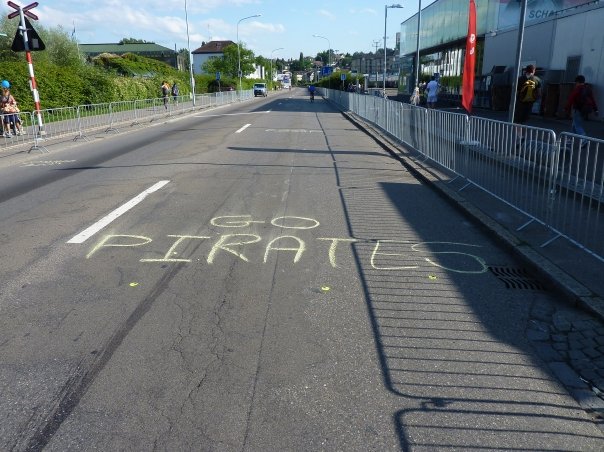 “Go Pirates” chalked into the road.

In longer races as well as nutrition, its good to have a plan for getting liquids out of your body, if you know what I mean. The swim is a perfect place to get yourself ready for a long bike ride so as I headed in towards the end I had done what was necessary! Whilst cycling its a different story altogether. I could slow down and stop, park the bike by a bush/tree and have a wee, or as many other people do, just get on and pee on the bike! Yes, it sounds pretty disgusting (wallowing in your own urine) but if you want to save a few minutes on the bike leg, then this is the way to go. There were a few tips on the IMTalk podcast some time ago but the best way to learn it through practice. So, part-way round the first lap on a downhill, I stopped pedalling, and got on with it. An instant time saving. From here on in I took every opportunity on some of the downhills to pee, and my most memorable/funny moment on the bike was when I was bent forwards ‘doing my thing’ and there was no doubt some spray coming back from my bike (this is a great technique to stop someone from drafting behind you!) and as I glanced to my left a Scandinavian fellow overtook me, looked across at me and laughed. He clearly knew what was going on and found it amusing - much like I did! 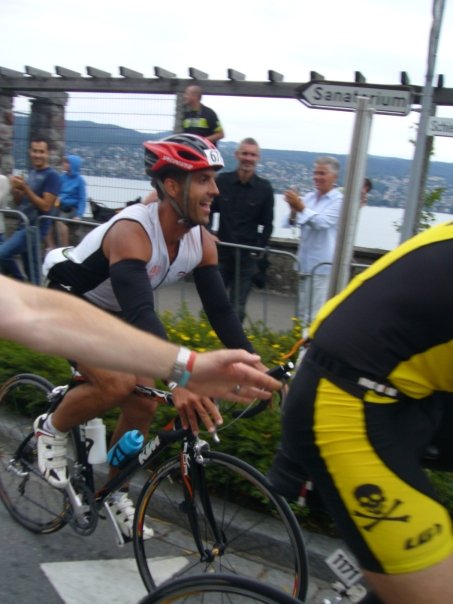 On the receiving end of a helpful shove up to the top of the hill! (photo by Pete C.)

Towards the end of the second lap as I headed up ‘heartbreak hill’ the crowds had subsided and it was a much quieter (but still really busy) affair. Just before I got to the top of the hill the Pirate support was still in full force and I got a helpful push/shove from James. A steady final couple of miles got me back to transition 2 feeling pretty good although my stomach wasn’t feeling great - just a bit of pain, most probably from all the energy food I’d been eating!

I was extremely pleased with my bike split - especially when I don’t have particularly fancy bike kit. So, my bike costs just a little over a thousand pounds but that’s on the cheaper end of the scale. Many people were riding 3/4/5 grand bikes with super expensive deep rimmed or disc wheels.

Transition 2 involved getting the bike back on its rack, then shoes off and running shoes on. I chose to change my socks at this point as some people have said that clean socks for the run can be a good thing - even if just to have something ‘fresh’ on your feet. I grabbed my run hat, put some vaseline where I didn’t want any rubbing, grabbed my GPS (I had two Garmin GPS’s on the day, as I was unsure whether the same battery charge would last the whole distance) and set off. As I started to run out of transition I saw Duncan (another Pirate) coming in with his bike. He wasn’t far behind me and after transition he was 2 minutes 18 behind.

My T2 was 3:30, which I know I can improve on. I could take my feet out of my shoes right towards the end of the bike stage, not change socks, and take vaseline on the run to sort out potential chaffing whilst I’m on the move.