It’s been over three weeks since the 2010 Bala Middle Distance triathlon so perhaps this is a reflection piece. Well, it’s not - I’ve just been too busy recently to write anything down!

Sharon and I left for North Wales mid-morning on Friday and after a leisurely drive we arrived at the camp site late afternoon. The weather was lovely and there were a few other ‘pirates’ already set up and relaxing so they were able to watch Sharon and I put up our tent in this highly pressured situation!

On Saturday I went for an easy spin of part of the bike course, partly to test out the fancy deep rim HED race wheels that Andy had let me borrow for the event. About 18 miles done and all seems well with the bike.

Sharon and I then did a little sight-seeing and had a watch of some of the action at the National White Water Centre. One day I think we’ll have to get a bunch of us out on one of the rafts.

After a quick spot of lunch it was time to register for the race. I jogged the 2.75 miles from the campsite to the sports centre whilst Sharon cycled alongside. After registration we met up with many of the other pirates for the traditional Saturday afternoon swim in the lake. The water was cold, and certainly refreshing. The weather was stunning so we spent probably a couple of hours or so relaxing by the lake. After running back to the campsite Sharon and I then headed out to get our pre-race meal….. In the past I’ve tried pasta, rice, etc. but thought we’d go for an altogether different option - fish’n’chips. Actually I had a large sausage and chips but you know what I mean. There were certainly plenty of carbs to be had from the chips. I’d soon find out if it was a good decision or not! 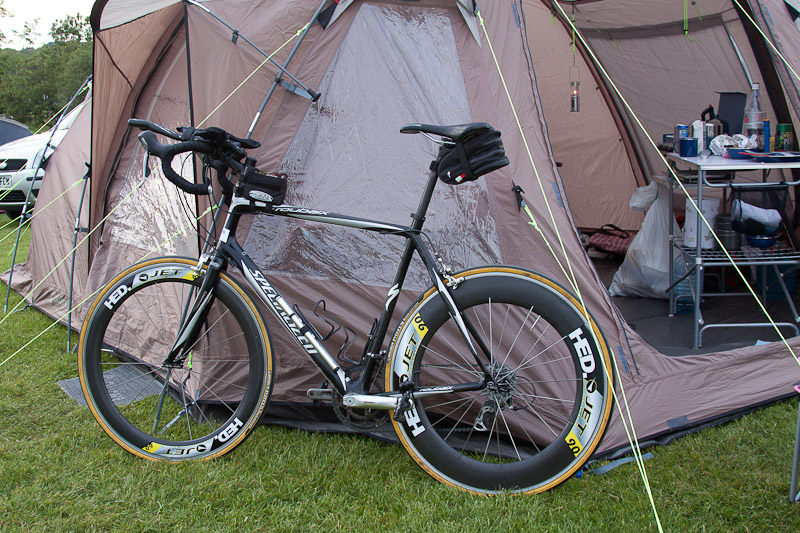 Sunday morning and an easy ride to the start. Sharon followed in the car with my transition gear. Got myself body marked with my race number and then setup in transition - including walking the route from the swim exit to my bike to make sure I knew where to go.

I do this everytime - that is, get myself into a bit of ruff’n’tumble in the swim. I normally do this on purpose so it will make me more confident when it happens again. I think I’m getting better at dealing with the kicks and punches but it’s really not my idea of fun! 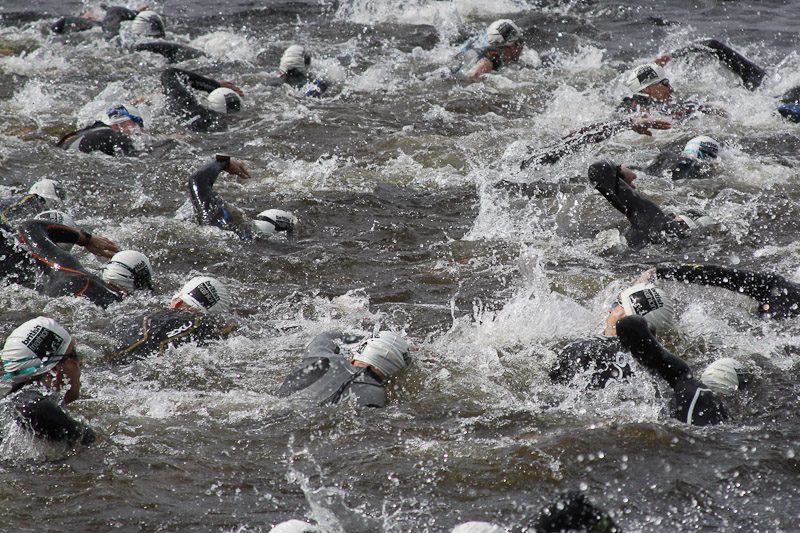 The water at the start was as always very shallow - not much more than waist deep. So much so that a few seconds after the start Sharon saw people walking rather than swimming through the melee! The water was fairly smooth (nothing like in 2009) although there was a bit of a breeze coming in.

I decided to start near the middle of the start line and right on the front row - expecting a bit of action from the go. The plan was to swim hard for the first 50 meters or so and then find a fast swimmer to draft off of for the next 1,950 meters. A great theory! I swam hard, and then a couple of seconds after easing off I started feeling arms and legs and people starting to swim all over the top of me. At one point I went to breath and got pushed underwater so ended up taking on board about a pint of lake water! A few seconds later I decided that this wasn’t for me so I swam to the outside edge of the pack and swam on my own. In fact I had clear water until the first turning buoy. The rest of the swim was uneventful. I didn’t enjoy the first few minutes of the swim and it took me a while to get settled.

My swim time was 36:04, my quickest ever swim at Bala, although two years ago I hadn’t done much open water swimming before and last year the conditions were rough, but I’ll take this time quite happily. I was 234th out of 626 (including relay teams) in the swim.

The bike is always a tough one and there was a bit of a breeze this year to make matters worse. The weather wasn’t hot sunshine like in previous years but it wasn’t too cold for just my tri shorts and top. Nutrition wise something wasn’t right. I had a bit of a stomach ache during a good part of the bike. I don’t know why (surely not last nights dinner) but this made it harder for me to take my gels onboard and I gave up on my PowerBar bars after a single bite. I drunk plenty of sports drink so at least that was good, but my stomach wasn’t right and I hoped it wasn’t going to give me trouble during the run. 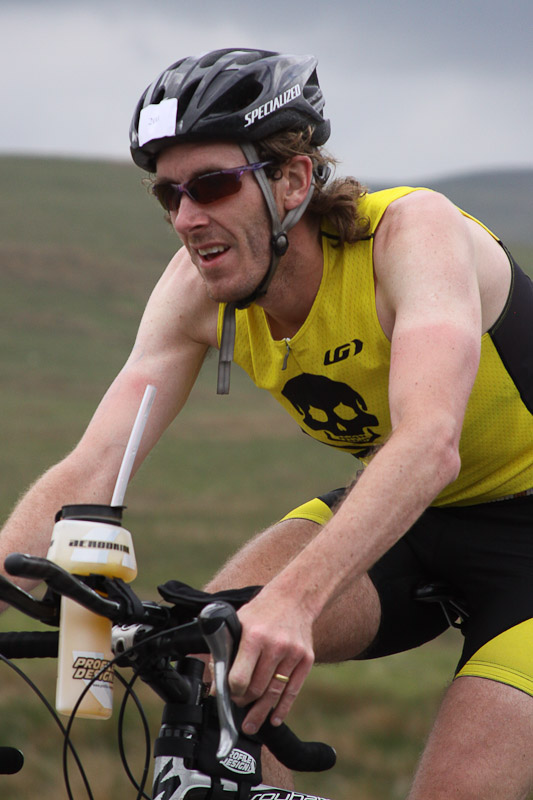 On the bike…together with tan-lines from the day before!

Shortly before the turnaround the lead female (Louise Collins) flew past me on the way to a 2:24:45 bike split. The women started a few minutes after the men and she was absolutely flying. I’m not surprised after only a few weeks before she finished 2nd female overall at Ironman Lanzarote.

During the second half I battled on. I had trouble getting my heart rate up and being able to push hard but I did what I could. Once I’d past about 39 miles (and the biggest climb of the day) it’s all downhill back to Bala so I pushed harder and had an enjoyable end to the bike. Maximum speed on the bike was 40.8 mp/h.

I’m not sure if I really enjoy the run or not at Bala. I love running but this is a tough old course. It’s relentless and never ending up/down/up/down. About 1k into the run I was getting plenty of pirate ‘aaarrrgghhh’ support from people on the early part of the course. As I’m strong on the run and have more of a background in this sport I enjoyed it when I went past a chap who moved over slightly to let me pass and said to me “I read your blog and there’s no way I’ll be able to keep up with you.” I thanked him (whoever you are) and continued on.

The first half of the run was mostly into a headwind and also has most of the climbing in it. It was tough. I overtook quite a few people in the first half and very few people went past me. This is how I like it :)

After the turnaround I knew I was on the ‘home straight’ so was able to push on with it. A veteran competitor from Oxford Tri club came past me and I decided to stick with him as much as possible. I kept close for as long as possible but during the final mile or two he drifted away. I think only one other person overtook me during the second half of the run. 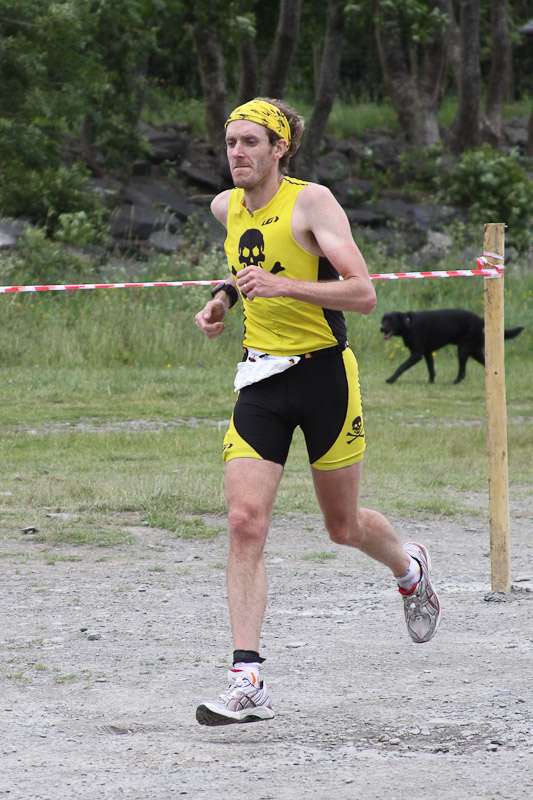 The pirate support was great during the run and I was able to cheer ‘Go Pirates’ every few minutes to people running the other way. Now that I’ve done it (three years in a row) I really wouldn’t want to do this event not dressed in the ‘classic’ yellow/black pirate combo! It rocks.

My run position was 94th out of 624 runners - clearly my best discipline.

It was a relief to be headed to the finish after a very tough race and when I crossed the line I was very pleased to find that my overall time was once again sub 5 hours. I was happy with how the run turned out - with it being my fastest time here at Bala. Next year I’d like to dip under 90 minutes for the run.

Race wise I would have liked to have been quicker on the bike. My cycling has gone pretty well so far this year and I thought the race wheels I’d borrowed would have made a big difference. Well, maybe they did (it was windy out there so made things tough). I guess I’d need to ride the same course in similar conditions again for a time comparison to be more measureable.

After the prizegiving Sharon and I bought some food in a local shop and headed back to the campsite to relax and have a beer with many of the others who were staying over on Sunday night. It was a lovely relaxing end to a good weekend - well, when it wasn’t raining and we all had to squeeze into our tent whilst we waited for the weather to clear!

On Monday we took a very leisurely drive home. We drove down through Wales and then across to Ross-on-Wye for lunch followed by a walk at the top of Symonds Yat - where we saw some peregrine falcons nesting on the cliff site. We arrived back home at about 6pm ready to unpack and prepare for the week ahead at work :(