After cycling this event in 2009 as part of my Ironman preparations I was back again for more fun in the hills this year. A tough 20 mile run on Friday followed by a swim and two 5k runs on Saturday ensured I was sufficiently knackered coming into this event. This is good for me (apparently) and will make me stronger (apparently)!

A small group of us set off at about 8:25am for this 105 or so mile hilly ride. The weather was great - cloudy, a light breeze and not too hot.

Within about five miles my legs were telling me that there were tired and aching. Hmn, not a great start. After a while they started to feel better - I guess they just weren’t warmed up for cycling.

There were a few groups of people chain-ganging their way round the route but as I’ve said before this isn’t really for me as it won’t reflect how I ride on race day. 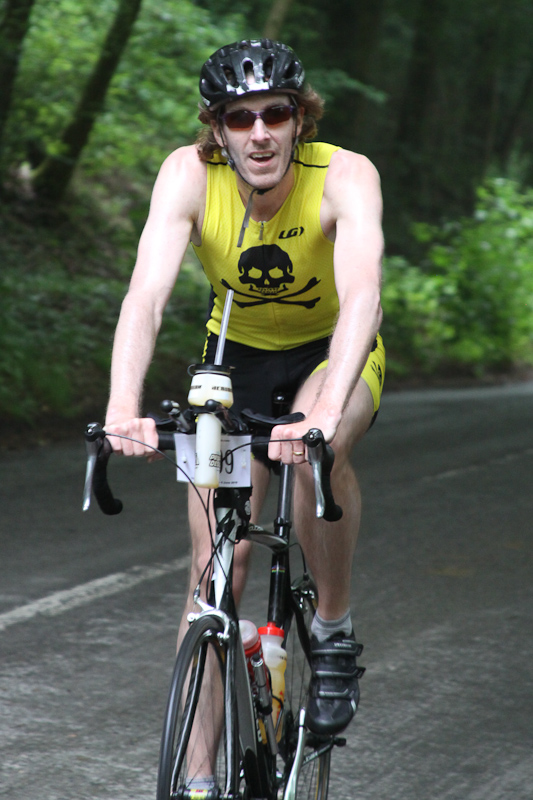 I found this a pretty tough ride. Sharon was armed with her camera at the top of Whiteleaf Hill (at around 60 miles) and when I got to her she asked “Are you alright D?” - I said I was but Sharon thought I looked terrible and really cold. I wasn’t cold but could have quite happily jacked in the ride about 10 miles ago. However, if I did take the easy option and drop out I’d feel bad and like I’d wasted an opportunity for some good training. Deep down I knew that this is one of the most important rides of my training year and it will make me stronger. Hill wise, race day will be much easier than today - that’s for sure.

After the second feed station at 75 miles I started feeling much better. All was going well until 90 miles. Half way up a short sharp hill the bike just didn’t feel right. I knew I had a rear puncture and hoped I could get to the top of the hill before having to change it. Within about 30 seconds I could feel the wheel rim on the road so it was time to get straight off and fix it.

According to my GPS it took my 9 minutes to replace my inner tube. I need to make this quicker. One thing that slowed me down was unscrewing the CO2 cannister from the holder on the bike. Next time in a sportive/race I’ll have them in my saddle bag instead.

It’s always demoralising watching people cycle past you as you’re at the edge of the road making repairs but once back on the bike you want to reclaim as much lost time as possible. In an Ironman when there’s a marathon to run at the end it would stupid to do that but here I knew I could push a little harder - and I’d just had about 10 minutes rest!

The final 15 miles were great. There were very few hills and I felt strong.

So, all in all coming off the back of a big few days of training I was 10 minutes faster in ride time than in 2009. I even managed run of just under a mile back to the car after I’d finished.

Will I be back next year…. If I’m Ironman training then almost certainly.