After putting in a great effort at the Wedding Day 7k race a couple of weeks ago and the fact that this years Ironman efforts are over with for now (well, I’m doing a half Ironman in three weeks time but I can blag that, right?) I’m thinking about getting back into PB shape over 5k. Last year I got my 5k best (17:53) at the Bushy parkrun 5 year anniversary in October and I keep telling people that I’m waiting until then to give it another go.

This weekend we had a couple of friends (Tom and Helen) staying over, both Ironman athletes with Tom being third place male overall at the Outlaw triathlon race last weekend (I’ll be writing about this race in the coming days). His 5k best is 18:17 from a couple of years ago. He was impressed that I came back from Challenge Roth a few weeks ago and ran just over 18:30 a week later and he (and I) wondered if he too could pull out a great performance.

Friday night was off to a local Italian restaurant. I’m not sure that the beers were ideal preparation but Bushy parkrun is never really an ‘A’ race - it’s just that if you drink the night before you’re unlikely to be on top form at 9am on Saturday. 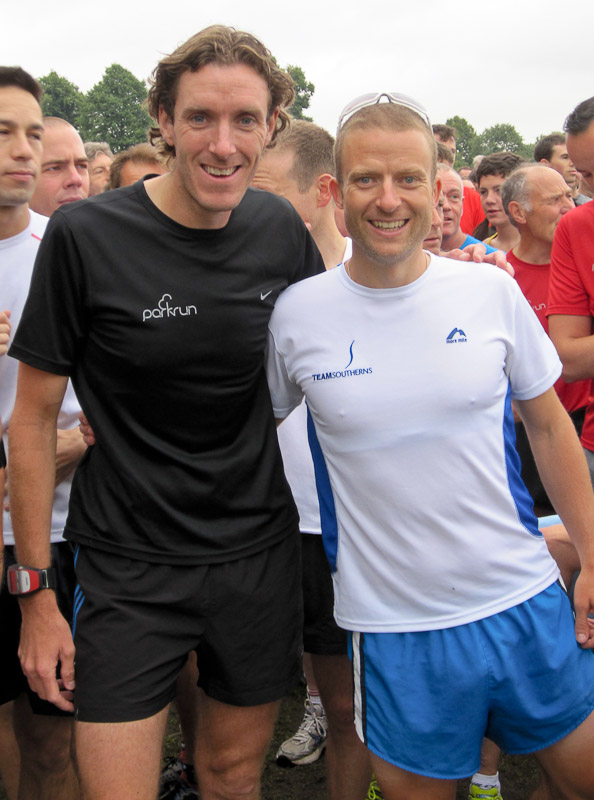 David and Tom (Williams) on the start line

As Tom and I lined up on the startline he asked me what I was going to aim for - I said about 18:30 and agreed that would be fine. After a few award presentations (Paul, the founder of parkrun had completed 50 runs so was presented with a t-shirt) we all set off - and were honoured by the presence of 5000m Sydney 2000 olympic silver medalist Sonia O’Sullivan running alongside us.

Somewhere close to 3km Tom pulled up beside me. I said something like ‘I think we’ve gone off a little too quick!’ His response was along the lines of ‘we’ve done 3k, no way we’re giving up now.’

We worked together and encouraged each other along from 3-4.5k. It was really hard work and my heart rate was sat at about 185bpm.

Coming round the tree near Hampton Court Gate there was another runner right in front of me. Tom was just starting to fall back at this point and I heard a shout of ‘Go Dave’ to which the guy in front of me put his foot down! He was pretty tall and I’m always a fan of getting a good draft off of someone so I tried to sit behind him. That didn’t last long.

Before long I was in the final straight - I wasn’t sure how close to 18 minutes I was going to be (as we were still both running much faster than originally planned) and as I crossed the line my watch flashed 18 minutes, 0 seconds. Result. HR averaged at 180 and maxed at 190.

This is my best Bushy parkrun time since October 2009 and I’m really pleased that I was able to get this time - especially after a solid 60 miles on the bike the previous day.

Tom couldn’t quite stick with me (fair dues though, he did podium the week before) but came through with a time of 18:14, which is a new personal best (PB). Smiles all round.

That was the extent of my exercise for Saturday, and then Sunday morning it was off to Richmond Park for a 13.5 miler which I pushed pretty hard for the second half.

So, right now training is going well. Lets see how long I can keep it up for as consistency is the key.