So, after a far from ideal Brighton Marathon last weekend my choice of recovery was to get back on the bike for the daily 13.5 mile each way commute into London. I decided it was easier to cycle on Monday rather than go on the London Underground. I made the right decision - at least on the way into work!

The way home was against a strong headwind the whole way. My quads (the only part of me that was hurting after the marathon) were destroyed and I was really struggling. All I wanted to do was get home! As I got through the front door to be met by Sharon I remember my words being “please take the pain away!” Remember - most people run marathons for fun! Although she couldn’t take the pain away I was pointed in the direction of a bottle of Mount Gay Barbados White Rum which certainly helped - that’s for sure…

Back on the bike for the next few days and I slowly gained full control of my legs and was able to walk up and down stairs unaided by a banister!

Saturday morning it was back to Bushy parkrun for my first run since Sunday. The plan was an easy run but that soon changed!

Prior to the run I was introduced to ultra running legend Bruce Fordyce and his wife. He was in the country after running the Paris Marathon the same weekend as Brighton and was then going to run the London Marathon the following day.

This man has serious pedigree - he’s won the 56 mile Comrades Marathon nine times, with eight of them back to back! According to Wikipedia he also holds the world 50 mile record. Well, he decided to have a little spin of the legs before the London Marathon.

Just before the start I asked Tom what he was looking to run - he said around 18:30. I told him to enjoy his run and tell me about it at the finish. I was going for something much slower - although I didn’t know what! It all depended on how my legs felt.

Well, clearly my legs felt pretty good as I raced off at somewhere around 18-18:30 pace. Seems like the fast twitch fibres were still in good condition… I was ahead of Tom but had no idea if he was close by. At around 3.5km Tom appeared beside me and pushed ahead. I stuck as close as I could but just couldn’t keep up the pace. Next thing another chap in a red t-shirt and a parkrun baseball cap came alongside me - it was Bruce Fordyce - and looking super comfortable. He got past me too and I had to really push to stay close to them. 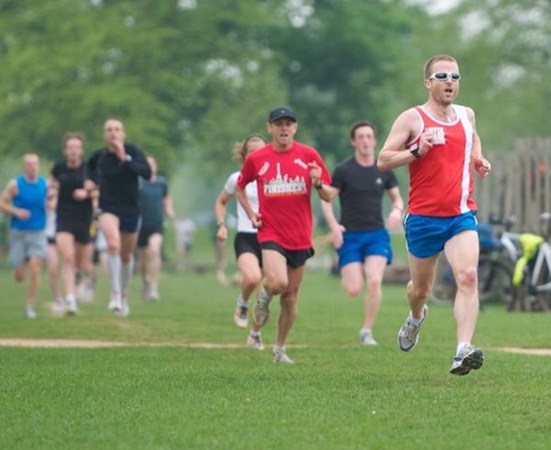 I had no chance of getting past them again so just pushed hard (i.e., not ‘really’ hard) to the finish and crossed the line in 18:34. Tom finished in 18:26 with Bruce one second behind. The following day Bruce ran an excellently paced 3:36 marathon in London.

I love parkrun. Since I started I’ve had the honour to run with Olympians, Commonwealth medalists and now Comrades winners. All for free. How cool is that!