By David on 1 May 2011 david ranelagh harriers

Just over a week ago whilst stuffing myself with food at a BBQ the lovely host Duncan M. said he was going to be running the Sutton 10k a week on Sunday. Hmn… this could be a bit of fun. I’d planned to do Black Park parkrun on Friday (a Royal Wedding special), Bushy parkrun on Saturday and then why not throw in a tough 10k to finish things (and me) off on the Sunday. Genius!

So, let’s talk about the warm-up to Sunday…

Friday morning I met up with Danny and Kirsty and we cycled the 17 miles over to Black Park for their Royal Wedding parkrun. The run kicked off at 9:30am and my plan for both this weekends parkruns was run close to 20 minutes. A solid run had me finishing in 19:34. That’ll do nicely. After a bite to eat and watching some of the early wedding action on my iPhone we cycled back on the lovely quiet roads - remembering to ring our bells at any sight of bunting on peoples houses. Much fun was had (by Kirsty and myself) - Danny didn’t seem quite as excited about the Royal Wedding as we were. Our timing was also perfect as I made it back home in plenty of time to see ‘the kiss’ - oh, and to watch it all over again and again! Buntingly good fun.

Saturday it was back to the regular haunt of Bushy Park. An easy ride over there on the mountain bike, a steady 19:53 and then ride back home. Two races - well, parkrun’s are not races, but an individual time trial ;) done.

Oh, in between all of this I managed to ‘win’ an entry into Monday’s Thames Turbo sprint triathlon race which is held only a few miles from home. My bike and running is going OK - my swim isn’t but it’s only for fun, right! My three ‘race’ weekend suddenly turned into a four race weekend - ‘The Quadruple!”

Sunday morning arrived and Sharon and I drove over to Sutton for the 10k. I raced this last in May 2007 and this was where I first went under 40 minutes - 39:45 to be precise.

My current 10k personal best is 38:54 on a tough course and I’ve had that since August 2008. The only 10k race I ever do nowadays is the Bognor Regis 10k and normally I’m either in the middle of ironman training or coming back from injury - or its blowing a gale by the seaside so I normally just dip under 40 minutes there.

This morning, although pretty windy I felt that I should be able to run a couple of 19:30 5k’s back to back so should just aim to push hard (but not too hard) early on and see what happens. With the company of other club runners nearby (Duncan and Bill) who are both capable of similar times I should have some company on the run.

As we set off we soon established a pack of Ranelagh Harriers runners - Duncan, Bill, Trevor, John and myself. Chris B. sped off into the distance and I didn’t see him until after the finish. 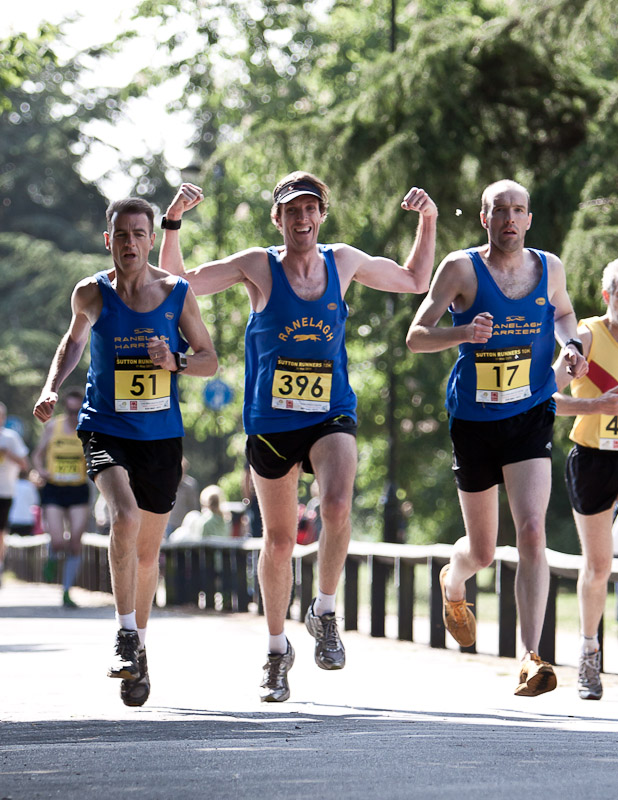 This is a three lap course and much of the second half of each lap is slightly uphill and into a strong headwind (about 15mph or so this morning). We stuck together as best as possible, all pushing hard and trying to keep up with one another - which was a great help. The first lap felt pretty easy. I had to hold back on my pace as I’d be needing my energy later on and the support on each lap as you head through Beddington Park was great. Sharon was taking photos and Kirsty (who’d run to the race to support) seemed to be wearing my clothes to keep herself warm!

We went through the 5k mark in exactly 19 minutes (by this time it was Duncan, Bill and myself - Trevor had run off ahead a couple of km before). If I could just do this again this would be perfect - although the 5k point is just before the uphill/headwind part which I’d only run once and had to do twice more. I expected there could be some drop-off because of this.

Keeping up the pace was getting much tougher on the second lap and by the third lap - when we were overtaking many of the much slower runners I certainly had to dig deep. Bill had drifted off the back of us and it was Duncan and I shoulder to shoulder. Just after 8k I moved ahead along with a guy from Clapham Chasers running club. About a minute or so later Duncan re-appeared with a second-wind. He muttered something along the lines of ‘I almost lost you then’ and it was good to have him back. The thing is, he then started running off ahead and I just couldn’t keep up with his pace. 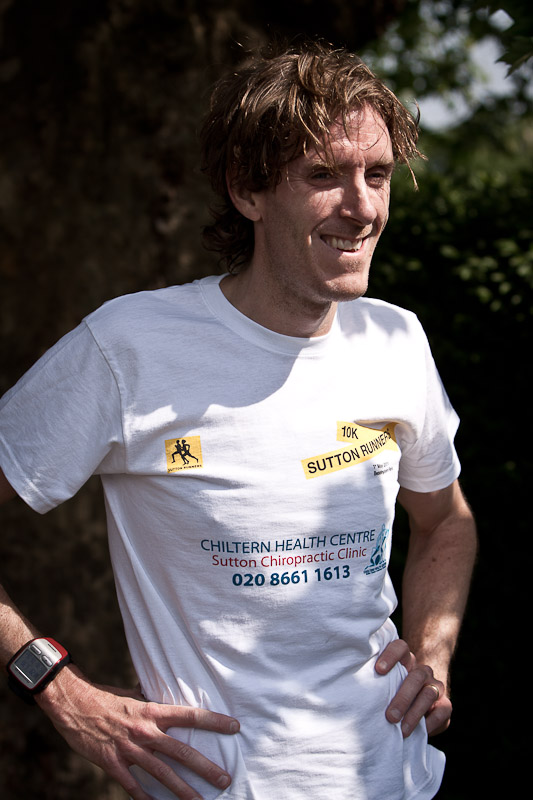 As we turned into the park the wind eases off and it was just a case of getting to the finish as quickly as possible (which is actually what I’d been doing for the past 35 minutes!). I knew I would get a PB and as I ran under the finishing clock to see it say 38:27 that was good enough for me. My overall position was 49th out of 422 finishers.

I love 10k’s but on the other hand I hate them as they’re such hard work. Never mind… only a couple of weeks before the Bognor 10k - oh, and a little triathlon in the morning!