By David on 15 May 2011 david ranelagh harriers

This weekend I was back down on the south coast for one of my favourite running races of the year - the Bognor Prom 10k - held in the seaside town of Bognor Regis.

I rarely race over 10k - for the main reason that its such a bloody tough distance. You run at close to 5k race pace…. twice! Normally the Bognor 10k is pretty much my only 10k of the year however a couple of weeks ago I found myself running the Sutton 10k race and found myself getting a well overdue personal best of 38:27 in tough windy conditions. 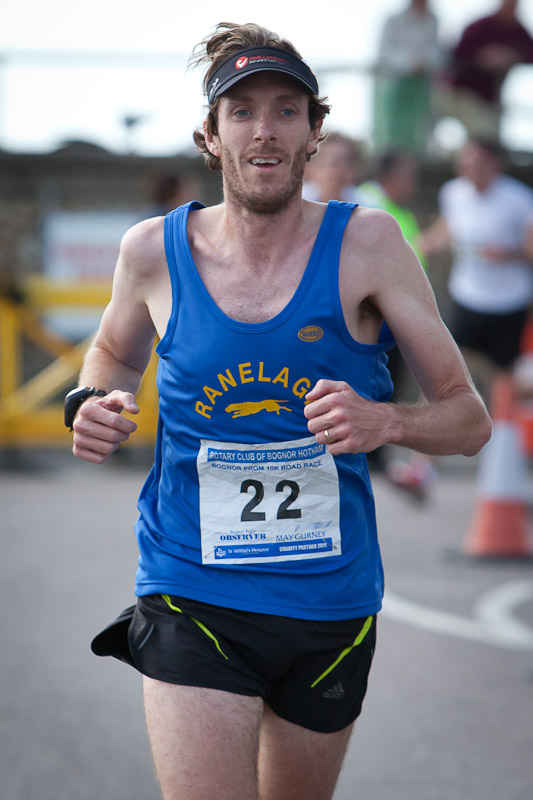 Sunday morning arrived and with a 10:30am start I could have a leisurely start to the day. Sharon was on my mum’s bicycle so cycled the two or so miles to the start whilst I jogged alongside her. The weather was lovely sunshine but with a 10-15 mph WNW wind. This meant that there would be a headwind during the second half of the run (but nowhere near as bad as in previous years).

After a good warm up I lined up at the start, about two rows back from the front. The first km of this race is very twisty-turny and with a large group of people who race off the front it gets pretty congested. As I had started a little further forward than in previous years things were a lot better this time around.

I went through 1km in around 3:50, which was right on with my pacing plan. I wanted to run two pretty even 5km splits of 19 minutes. I ran 19 minutes for 5km at the Sutton race a couple of weeks ago and planned to do the same again today.

As the km markers went by I continued to hold my pace. There were no groups of runners around me and unfortunately nobody to draft off of. I’d say that I ran the entire race on my own.

The support on the course is fantastic (as always) and I knew that I’d get some good cheers from Sharon (at the 2k and 7k points), and then my mum (4k) and dad (6k) as my parents were marshalling. 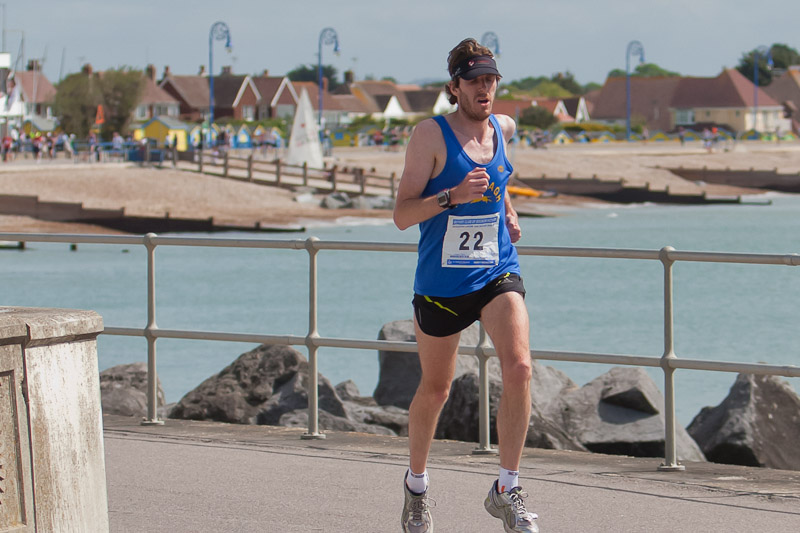 I went through 5k in about 18:57 which was bang on target. After 5.5k you turn back onto the promenade for the long slog back to the finish - almost entirely alongside the sea.

I was still running on my own and there were a few individual runners up ahead of me. I was desperate to close the gap and get on the back of someone and get a bit of a free lift/draft during the windy parts that were coming up.

The trouble was, every time I managed to close the gap and get behind someone, they were running slower than I wanted to and I didn’t feel that hanging right behind them would have given me any overall benefit (I’d use less energy but I’d be running much slower - which isn’t the idea). So it turned out that every person that I caught up with, I ended up pushing straight past them and doing my best to make sure that they couldn’t try and sit on the back of me! Yeah that’s mean but this is racing… it’s not a knitting club :) 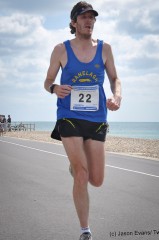 The last few k’s were tough - really tough - but I knew I had a chance of beating my previous personal best (38:27) from a couple of weeks ago. I just had to keep focused on good running form and leg speed. There’s a photo of me deep in the ‘hurt box’ at around 9km in over at flickr.com thanks to Jason Evans. I was deep in concentration and able to grunt occasionally in thanks to people cheering me on!

The crowd support was fantastic throughout and during the final few hundred metres both sides of the road were filled with cheering supporters. I continued to catch up with (and overtake) runners who were ahead of me and as I came round the final corner I caught sight of the finishing clock - 37:58, 37:58, 38:00…. doh! I pushed on and crossed the line in 38:03 - which is another personal best by some 23 seconds. Certainly no complaints there. I finished in 21st position out of 1,486 finishers.

So, after my eighth Bognor Prom 10k race I’ve got myself a great personal best from no dedicated 10k training. Who knows what 2012 will hold…