Bank Holiday Monday’s mean one thing if you live in South West London - it’s the day of a Thames Turbo Triathlon race - which run every bank holiday. Last week I was watching and took a few photos (see my photography blog) but this week I was on the start line…

I’d not planned to be racing today but earlier in the week I managed to ‘win’ a place through the good people at For Goodness Shakes. The trouble was that I’d run a 5k on Friday, one on Saturday, ran a 10k PB (personal best) on Sunday and here I was today, er, slightly non-rested for a triathlon!

It was windy - very windy today (the Met Office observations had the wind speed at 17mph but gusting to 31mph) so the bike was going to be fun, with the entire second half of the ride (as its an out-and-back course) being directly into the wind! What joy.

I was up at 5:20 having my coffee and porridge and shortly after 6 cycled the 4.5 miles down to the pool. I got everything set up in transition and awaited my start (which was at about 8:25am). This gave me a chance to catch up with friends and watch the first ‘wave’ of swimmers start the race. 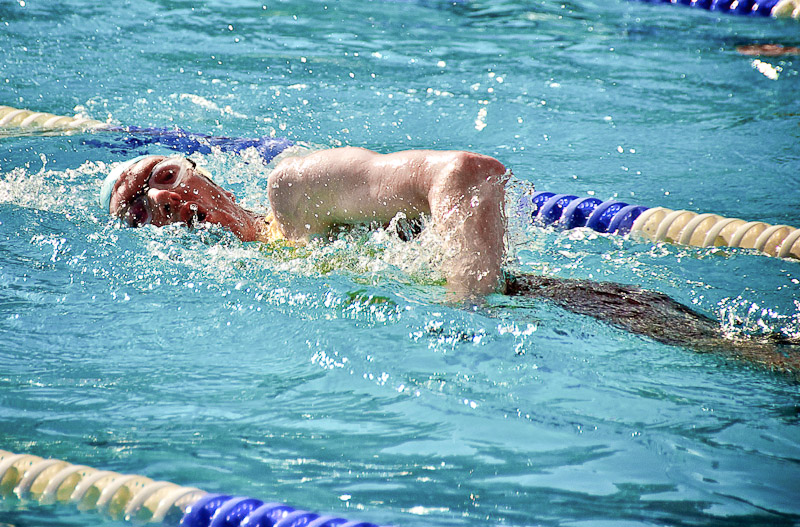 I must say I wasn’t particularly prepared for the swim - the last time I went swimming was on 25 February and all I did was float around and chat with Danny for an hour. Well, I did manage about 10 or 12 lengths but that was it!

So… my plan for the race was to just get through the swim, ride my little heart out (even though my legs had taken a right punishment over the past few days of running) and as for the 5k run - just treat it like a parkrun - I can do those with my eyes closed!

The swim was uneventful - which I was happy about. No carnage whatsoever. The only trouble I had was getting water in my right goggle about four times. Once out of the water it was a quick transition and then onto the bike. My swim time including transition to bike was 9:06 (8:50 in August 2010 and 9:17 in May 2010). 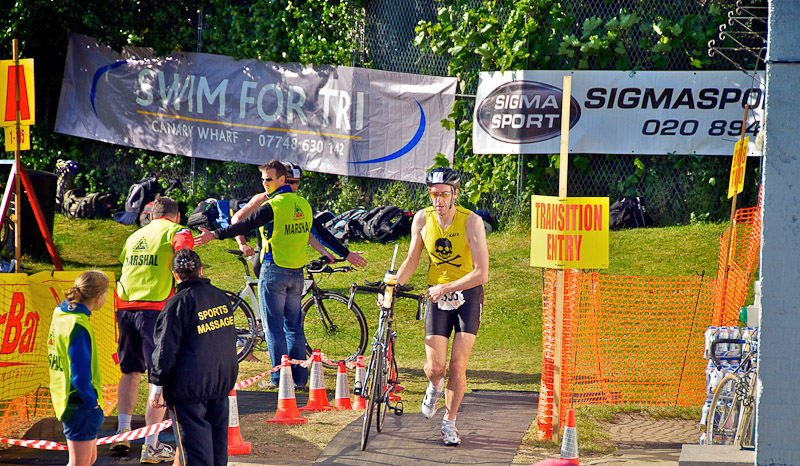 I knew the bike was going to be tough but it made no difference to my strategy - push hard - and when it gets tough push harder (incidentally this is probably what Sharon says to her pregnant women at work when they’re giving birth!). Heading to Hampton Court roundabout I got a feel for the headwind. Bloody horrible. After turning 180 it was the long (fast) run to the far end of the course (about 8.2 miles into the 13.4 mile(ish) route. At the traffic lights into Lower Sunbury I saw the lights in the distance had just turned red. I eased off ever so slightly and by the time I got to the lights they’d gone green again. The marshal on the corner shouted out ‘good timing’ to me :)

As I turned at the lights I went past a man who’d previously sped past me (and had been caught at the lights). Once he got back up to speed he came past me again. He slowly raced off ahead of me and I couldn’t keep up with his pace. Nobody else caught me up on the bike and I overtook a good 5-10 or so other cyclists who were ahead of me.

The last few miles of the bike were into the strong headwind which at times really pushed you all over the road. It was hard hard going but I knew there would be the ‘7 minute non-compete zone’ at the end of the bike which would give me a chance to relax and prepare for the 5k run.

My final bike split was 35:20, which I was really impressed with considering the windy conditions. This was the 22nd fastest bike split of the day (or 21st if you discount the one relay team that was faster).

Comparing some stats for the bike leg…

For the geeks out there… finally, I have some actual power data from todays ride. I need to continue reading this power training book to make full sense of all of the data but the overall stats are that my normalized power (NP) for the bike leg was 310 watts. My peak 20 minutes gives an NP of 313 and peak 30 minutes is NP 311. My average speed was 23 miles per hour. Getting there…

After getting to the end of the bike you have seven minutes to fight the traffic and traffic lights to get back to the transition area. It was an easy ride back where I took on some sports drink and got ready for the run. As you head back into transition the clock starts ticking again and its back to full effort. A quick change into my running shoes and I was off!

About 750m into the run I could hear footsteps closing in behind me. I had to dig deep to keep the chap at bay and was happy to be able to maintain my pace throughout (and not get overtaken). I now think that being in the second wave of starters at the Thames Turbo races appeals to me as I get to see (and overtake) many people on the run - which is great for motivation. 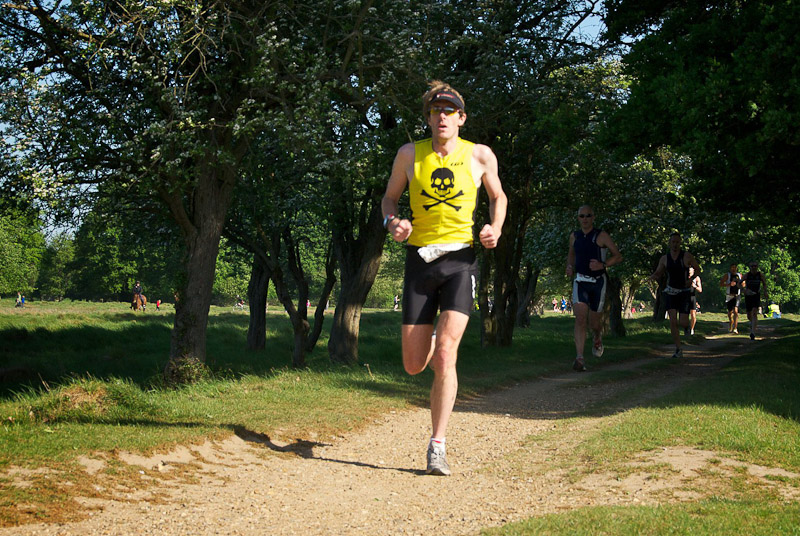 As I crossed the line the clock stopped and my time was 1:03:59. Somehow in these challenging conditions I pulled out a 38 second personal best! Result. I was 20th overall (19th if you discard relay teams) and 9th in my age group (Male 30-39).

I firmly believe that my recent regular bike commute into central London has really helped me with my cycling and my recent marathon training helped with my running. My lack of swimming hasn’t held me back too much, but with the news that my local pool has just re-opened after being closed for over a year this means I can get a few more swim sessions in for the triathlon season ahead.

Finally I will quickly thank all the marshals and supporters who were out on the course today, especially Danny, Kirsty, Roger, Gill, Nicola, Stuart, Grant and Guy.