In 2009 and 2010 I took part in the excellent Chiltern 100 cycling sportive event. It’s not a race - just a good organised ride over a rather challenging route (read more about it in my ‘09 and ‘10 reports).

As I’m not racing an Ironman distance race this year I chose not to do the full 100+ miles (which is now 111 miles due to a change of race HQ) but instead opted for the ‘medio’ route - a mere 75 hilly miles! This would be my longest ride since Challenge Roth (112 miles) from July last year (I’ve ridden no more than 60 miles in one ride since then) so was sure to be a good little endurance test. Although I’d been cycling a lot on my mountain/commuting bike into London for about 6 months or so - endurance was the main thing I don’t think I have - so this would be a good test. Sharon and I arrived at the event HQ with plenty of time to spare before the start of the ‘medio’ ride which gave me time to realise that my clothing choice was very wrong for the conditions! I had opted for shorts and my triathlon racing top (no sleeves) and with the moderate winds and cool air, this certainly didn’t seem ideal. My only choice was to go back to the car and grab a cotton t-shirt out of the back and wear this on top.

I believe I was the only person wearing a cotton tee during the event and I bet many people thought I just didn’t have a clue about proper cycling gear! At least I wasn’t head-to-toe in ‘pro team’ kit (Sky, Liquigas, etc.)!

OK, from here on in I’m going to be spouting out a few numbers. Not the usual heart rate stuff (especially not in this post as I left the heart rate monitor at home!) but more related to cycling power output. There’s going to be plenty more of this over the coming months so if you’ve no interest in this kind of data then feel free to skip the cycling posts in future.

After a 55 mile ride to my parents a couple of weeks before which I found really tough for the last few miles I decided to try and ride as much as I could to a steady power (215 watts - around 70% of my FTP) as this was similar to my 55 miler. I was prepared to slow right down on the uphills in order to keep the power as low as possible. The plan was that people could happily ride past me at these points and in the latter stages I’d still be able to maintain power and pass them all again :)

So… I set off and the job was just to concentrate on power. Out on the road it’s tough to stay steady because of all the different variables at play (wind, traffic, junctions, hills, etc.) but I tried my best. When it came to the climbs it was pretty much impossible to stick to 215 watts without slowing to about 2 mph and falling off (which I didn’t) - I just rode as slowly as I could to stay upright! Because of the number of hills (the race pack says 1760m of climbing) this pushed my average wattage up and looking at my data for the first four hours of riding (I’ll tell you why in a minute!) I had an NP of 224 watts.

I chatted to a couple of other riders on some of the tougher climbs (as I was riding ‘easy’) - one nice chap who chatted about Ironman racing and another guy who shouted to all around him at one point that ‘this is just like climbing the Zoncolan’ - which almost made me fall off my bike with laughter! 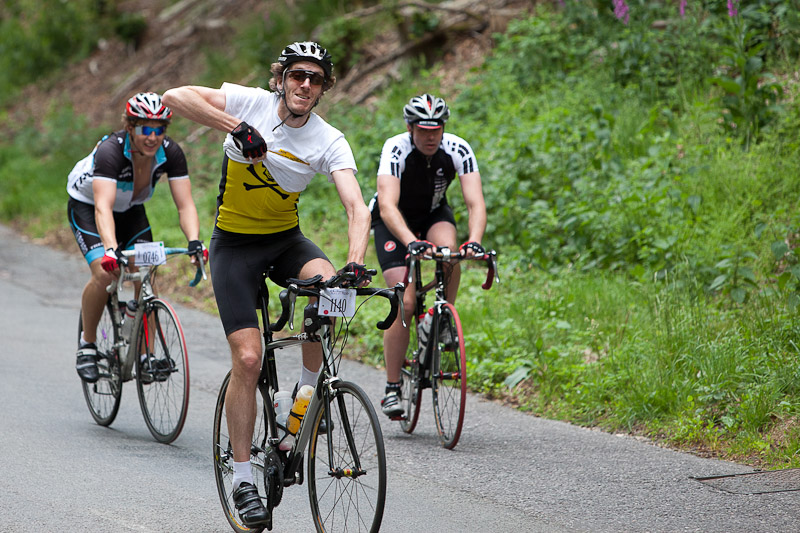 At the four hour point (after stopping very briefly for a quick toilet break and drink refill which will have cost a few minutes) I was just over 64 miles in (so 10 miles to go) and in the back of my mind I had my first thoughts about my overall time. Sportive events normally provide some timing ‘standards’….

“Although Sportives are non-competitive, riders often like to set themselves targets to aim for. The table below shows the time and average speed required to achieve either the Gold, Silver or Bronze standard at this event.”

The gold standard for the medio route was 4 hours 40 minutes. With 10 miles to go I thought I could have a good chance of getting this - however, with the refuelling stop I wasn’t sure exactly how much time I had and I also wasn’t sure about the hills in the final 10 miles.

I had a quick think and thought - ‘sod it, lets give it a go - I’m only 10 miles from the finish.’ So at this point I put the hammer down and started pushing hard. I was constantly overtaking people in the last 10 miles although it did seem that quite a few people were starting to put some extra effort in.

In the last 2 or 3 miles there were a couple of guys ahead of me who were pushing real hard and trying to work together. I’d ridden the entire ride on my own without any drafting whatsoever and had to push really hard to get near to them.

With under a mile to go I caught up with the two guys just as the one on the back shouted to himself something along the lines of ‘keep going’ - or something just as motivational! A few seconds later he stepped off the gas and I was beside him. I said ‘come on, less than a mile to go’ and his response was ‘I just cannot do it!’ so I pushed on and tried to get close to the guy ahead.

We ‘hammered on’ till the finish and as we crossed the line we stopped, shook hands and congratulated ourselves for a job well done - and a ‘gold standard’ time.

Looking at the data from the final 10 miles my NP was 276 watts (up from 224 in the first four hours). Overall my NP was 232 watts - understandably more than my original plan to go for 215. Once I understand more about the figures and the graphs that I can get out of these sessions I’ll be able to pinpoint things I’m not doing right in order to get better.

So in summary, I rode much better than expected. If I can keep this fitness up (and build upon it) over the next few months then I hope to put in a good Ironman bike split next year. Only time will tell…