If you live anywhere near Bushy Park in Southwest London and enjoy running and socialising then the Wedding Day 7k race is one event that needs to be a firm fixture in the calendar. Since discovering the event in 2007 I’ve run it four times now (missing out in 2009 as I’d only recently completed my first Ironman triathlon and didn’t want to race so soon afterwards - something that didn’t bother me in 2010!).

Recently my 5k times have been good and after a cracking run last year I felt that I should be able to better that performance if everything went alright on the day. I actually had a pretty lazy week of exercise having been working away from home (lots of travel messed things up a bit) and enjoying the delights of hotel food so I’d either arrive at the start feeling lethargic or fresh. Only time would tell.

After the 2010 ‘fun’ that I had racing with Duncan M. from Ranelagh (see last years blog for that) he decided to adopt a different, but perhaps more sensible strategy. Rather than race it like a 5k and die towards the end he was after even splits and if all went to plan he’d come cruising past me close to the finish. Interesting tactic… however, it could just work.

Conditions were ideal, a light breeze and temperature probably close to 20 degrees. A lovely summer evening (for a change!) and a good crowd of over 400 runners. I was lined up on the front row and as the start signal went we were all off like rockets (kind of!). Naturally getting carried away with the faster runners I settled into a pace that although comfortable at the time I knew I wouldn’t be able to sustain. After about a half mile I eased back ever so slightly. I was still at around my 5k personal best pace and it took a while to gently ease back some more. It was good to have a few other runners around me at the same sort of pace so we were all pushing each other pretty hard. 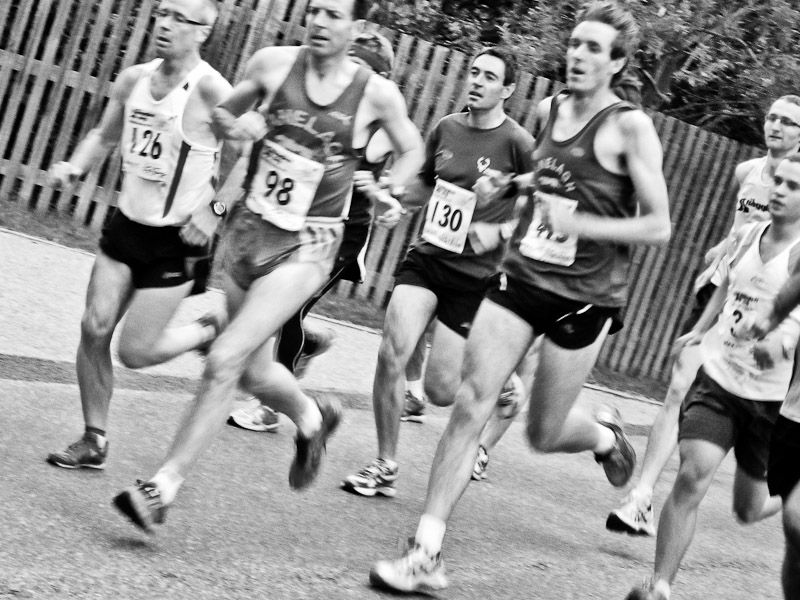 At around 3k I saw the first casualty - a chap who had gone off way too quick early on and was paying for it - unfortunately well before the half way point! I had no sympathy as he was wearing an MP3 player with music blaring out (I could almost make out the words as I ran past him). So antisocial.

At this point I was running close to Mark H. from Ranelagh and a chap from Cambridge Harriers. The guy from Cambridge pulled ahead and I sat right behind him. As we turned off of the grass alonside Chestnut Avenue and headed back into the park he started to open a gap which I wasn’t able to close down on. It turned out that he had a fantastic second half and gained quite a few places on me. Nice one.

From here on in I was running alone. I went through 5k in around 18:05. This was three seconds slower than in 2010 but I was feeling a little stronger this time around and I remember how much of a struggle the last bit was last year. Hopefully this time I was more under control.

The final 2k were hard work. I was slowly closing in on two or three men ahead of me and as I headed into the finishing straight I’d got past two of them but one put in an almighty sprint finish to take me before the line.

This wasn’t really an issue as I crossed the line in 26:08 - a 17 second personal best on last years time. I certainly cannot complain about that. I finished 29th out of 487. Although my time was much better this year I was further down the field. Last year I was 19th out of 505. As for Duncan, he just wasn’t feeling it on the night so was unable to test out his even pacing strategy against my ‘go like a nutter and hang on for dear life’ approach.

Following the race it was time to enjoy a picnic out on the field in front of the cricket club with friends. As with last year (and the previous times that I’ve run this race) it was back to Bushy parkrun the following morning where I ran a nippy 18:33 which I followed up with a 50 mile bike ride. Busy busy busy.