By David on 2 September 2011 david triathlon

After taking part in Thames Turbo race 2 earlier in the year I decided to enter the August Bank-Holiday race as 1) they’re great fun, and 2) it would hopefully get me in the swimming pool again as I’m rather slack when it comes to swim training.

I’d planned to kick start my swimming a few weeks ago but whilst doing some maintenance work on my brothers mountain bike I somehow smacked my ribcage against his bike, which caused a great deal of pain for a good 2+ weeks. Coughing, turning in bed, sneezing - all really painful. The pain started to get less and less and this meant I had to go swimming again. I managed three swim sessions (in just over a week) prior to this race which is pretty good for me!

From a self-timed 400m time trial swim at the pool at the start of the week I swam a steady 6:50 which was the same as I’d estimated for the previous race - so it looks like my 400m time hasn’t changed in the past few months. That helped no end with my swim confidence going into this one.

Once again I was in the second swim wave but I’ve decided that apart from the long wait from signing in to the actual start I’m happy to go in the busier second wave. It’s not busy as such in the pool, but there are lots more cyclists around my speed to work with (or against).

Happily I had a good uneventful swim. I felt comfortable throughout and didn’t get overtaken. I did catch up with one swimmer ahead of me and rather than overtake him (he was very similar speed to me so it would have taken quite some effort) I conserved some energy and just swam right behind him for the final two lengths.

Transition 1 was fast and efficient, with the only pause being when I turned on my ‘on-board’ video camera! More on that later.. I also didn’t wear socks this time round as I have some triathlon specific cycling shoes (and running shoes) that don’t seem to rub when not wearing socks. My swim time (including transition to the bike) was 8:40 (53rd fastest). Looking back… May 2011 (9:06), August 2010 (8:50), May 2010 (9:17). These previous times did involve me sitting down and putting on a pair of socks - which because of the times there show that my August 2010 swim was very good indeed (I’d estimated 6:40 for 400m for that race). Note to self… must swim faster - or give myself a faster swim estimate so that I can really push hard to keep up with the people around me. 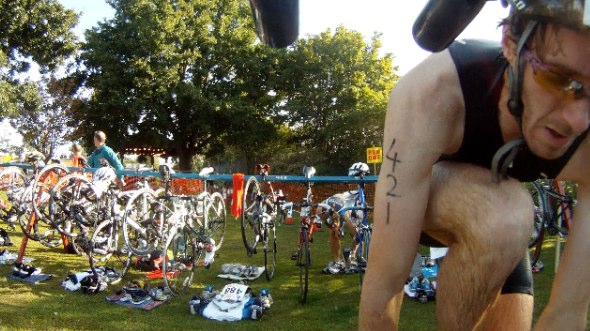 As I got onto the bike I found myself in lot of traffic heading down the main road from the pool. It was not safe to try and overtake the cars so I just pedalled steadily alongside them until I got onto Hampton Court Road. At the roundabout by Hampton Court I then had to slow down as there were people at the pedestrian crossing! Very frustrating.

Before long it was back to full speed and racing towards the dreaded traffic lights at the turning to Lower Sunbury. As I neared the lights there was a large van ahead that slowed down as the lights were red. I eased off the speed knowing that the lights would be green before long but I then was shocked that the flippin’ van was also turning left. I and two other riders were then stuck behind the van for what seemed like ages. I think I only lost about 20 seconds during that segment but it was long enough!

Once the van had turned off into another road it was back to full steam ahead. There was a bit of back-and-forth between myself and another rider but when I saw him slow to have some drink I pushed hard past him and gained some valuable time. I didn’t see him again.

It was just a case of head down and push hard all the way to the turnaround point. This first half of the bike route was into a slight headwind and I knew that it would feel easier on the way back - well, I’d be pushing just as hard but hopefully going a little quicker with the wind behind me. It wouldn’t ‘really’ be easier. As I did the 180 turn at the roundabout I saw Dean, a fellow competitor who I seem to race close-by at these races quite often. He took a tight inside line and got ahead of me.

I chased hard behind for a couple of miles or so. As he overtook one chap ahead of him the guy being overtaken changed gear quickly, pushed hard and sat right on Deans back wheel - big time drafting. I didn’t want to be anywhere near such activity (!!) so dug in and got past them both. I then kept pushing all the way to the finish.

At the end of the bike leg you get 7 minutes to return to transition 2, where the run begins. I rode gently back to transition ready to give it some in the 5k. The best sight of all was when I ran in with my bike to put it on the rack and there were no other bikes around! This ‘never’ happens with me - so clearly I had a pretty good bike leg! Transition was nice and quick and it was off on the run I went. My bike split was 34:48 and 15th fastest. 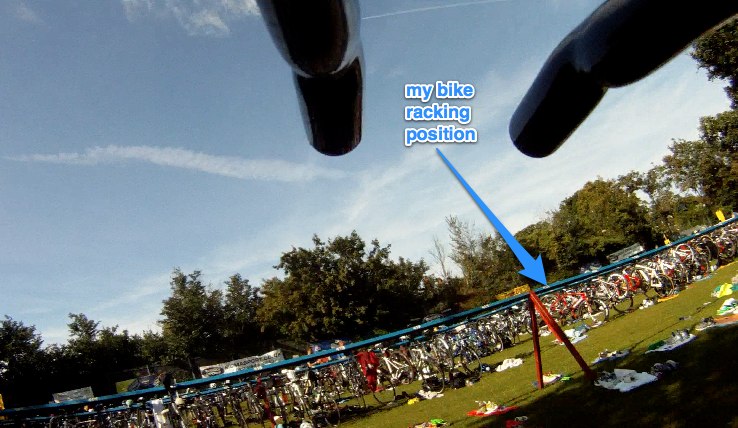 My increase in speed certainly is related to the increase in cycling that I’ve been doing the past few months and also (at least I hope) related to the new ‘go-faster’ wheels that I recently bought. One thing I do know is that because of the traffic on the course I did lose probably in the region of 30-60 seconds on the bike. Give me a traffic-free route and I’ll smash my time (hopefully!).

Onto the run… Normally there’s quite a few runners around during the run (one of the things I like about being in the ‘second wave’ of starters) but today it seemed really quiet. I overtook a few (much slower people from the back of the first wave) but there was nobody close to me that was anywhere near my pace. I just had to get on with it and run as best I could, overtaking (and giving support if I had a spare breath) to other runners.

On each lap I had some fantastic screams and shouts of support from family and friends that were really appreciated. The final push came to the finish and I crossed the line with a run time (including transition) of 18:57 - 12th fastest of the day.

The results came out later in the day (all times are from the provisional results) and my overall time was 1:02:25, 15th overall and 9th in my age group.

I’m really happy with how the race went and as this is really the start of my triathlon season (I’ll be training during the winter for a big race in January) this is a great boost for me.

Finally, for anyone who’s interested - here’s my full power data from the bike - viewable at the TrainingPeaks.com website.

Finally I mentioned something earlier about a video - well, here’s the video I took during the bike using a camera fixed to the aero-bars at the front of the bike (or click here to view it at YouTube.com).