Dear Reader, let me set the scene. After “discovering” running and losing weight back in 2007, I have had a couple of years unable to run for one reason and another, which I won’t bore you with. Back in April, I was trying to decide whether or not to take up my deferred London Marathon place from this year and run in 2012. I was 4 stone overweight. So, I joined Weight Watchers and started to run a bit more. I decided that if I could run a “reasonable” Half Marathon at Bedford today, then I would train for London.

We last ran this race in 2007, and it was then that I set my Half Marathon PB. I haven’t bettered it since, admittedly I’ve only run two more Half Marathons since then. My training has been reasonable, I have lost (so far) 41 pounds in weight, so I was feeling almost prepared.

Fast forward to this morning - I was terrified. In fairness, I’ve been terrified for the last few days! I was feeling the pressure (from myself, no-one else might I add) and I was happy to see some friendly faces in the form of lots of the Pirate girls - and even happier to hear from David who had arrived safe and sound after cycling to Bedford from home this morning, as part of a brick training session.

We lined up on the start line, I saw some Ranelagh pals which was lovely. We were off! I can barely remember details of the race and it’s less than 12 hours ago. I set off in a melee and clocked my first three miles starting with a 9. That sort of wasn’t in the plan. Ah well, I was having a nice time - then I saw the first hill of the race, a short, sharp incline. Up and over I went. The next couple of miles were fine, little bit windy and a bit of a drag up a dual carriageway (speaking of which, if a race asks you not to wear an MP3 player for safety reasons and you wear one anyway, would it serve you right if you didn’t hear a car and got squashed on aforementioned dual carriageway?) slowed me a little but I felt OK.

Mile 7 to 8 I really didn’t feel OK. What a horrible, headwindy, drag upwards. I decided that once I got to mile 8, I would have the gel I had in my pocket. I don’t really “do” gels or drinks when running but I felt I needed it. I somehow got it into my tummy (bleeurgh!) over the course of a quarter of a mile, timed it like that so I could have some water at the drinks station. I actually think it helped, whether it’s a placebo effect or really did, I don’t mind. Still bloody horrible though.

The next few miles just passed in a blur - every now and again I would glance at my watch and think, “ooh, perhaps I’ll get a PB” - but then I remembered that my Garmin was recording the miles slightly early (as it did in 2007), making the total distance 13.2 miles, which then had an effect on my finish time. Mind you, working that out whiled away a few minutes ;) I was happy again to see the 10 mile marker, just a parkrun to go. Hooray. I carried on, feeling strong, when suddenly at 12.5 miles on my Garmin I thought, “Oh no, my wheels are coming off”. I could have sat down at the side of the road, I just wanted it to end. In 2007 I employed the, “Paula Radcliffe Counting Method of Distraction” at mile 10. This year, it wasn’t until mile 12, so that’s an improvement at least ;)

Before I knew it, I was heading up the final incline to the finish, I just couldn’t do any kind of a sprint finish, my legs were well and truly done for. I saw David and heard him telling me to push on - all I could reply with was, “I’ve done a PB!”. I had. A PB of over 3 minutes - giving me a new Half Marathon best of 2:08:26. Totally over the moon. Totally. If you don’t believe me about how over the moon I was, the photo below taken seconds after the finish shows it pretty well :) 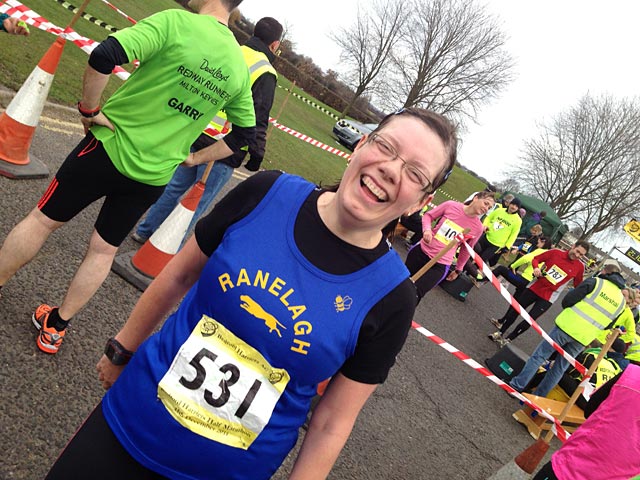 A bit of milling about, a coffee, some catch ups and cheering in, out for scampi and chips and we were homeward bound. What a day!

If you’re interested in such things, below are my splits from this year. I’ve looked at my mile splits from 2007 - and the obvious gains were in the tougher bits, although there’s a general gain on every mile.

This year I finished 1322/1523 and I was 76th in my age category. I guess that after scoring myself a shiny PB, it means I will be training to stand on that start line at the London Marathon in April…