So… after months and months of saving, planning and a rather long flight from London to New Zealand (where we didn’t really get any jet-lag!!) Sharon and I have been doing lots and lots of travelling in our campervan and sightseeing. During our first week here we visited places including Mount Cook, Queenstown (including the awesome Shotover Jet boat ride), Doubtful Sound (lovely overnight cruise), Milford Sound and after temperatures ranging from absolutely freezing cold (full winter gear on) we’re now in the shorts and t-shirt weather of Wanaka. This is the location of Challenge Wanaka - an Ironman distance race that takes place on Saturday 21st January.

Wanaka as a town is lovely. Not too big, not too small, situated right on a stunning lake with mountain ranges all around. It truly is a stunning location and I can believe it when it is referred to as “The World’s Most Scenic Iron Distance Triathlon.”

After tons of driving/sightseeing and a good dose of rain (i.e., about 48 hours worth of the stuff - non-stop!) training opportunities have been rather limited (my running mileage for last week was about ten miles in total!). My bike has only just been put back together after flying it round the world (which only cost £35 when we checked in at London - bargain!) but first things first, the Radio Wanaka 5km Fun Run on Monday evening.

It’s amazing that the whole town is fully behind Challenge Wanaka. Event flags are flying on lamp posts all down the high street - the regional newspaper had a 12 page event ‘pull-out’ in it a few days ago with details of the race and a full entry list - my race number is 358. The local radio station is always talking about the race and what’s going on in town this week. It really is something special and amazing to be a small part of it all.

Sharon and I arrived in Wanaka on Monday afternoon to be met by blazing sunshine and a very light breeze. Going out for an evening run was meant to be refreshing! 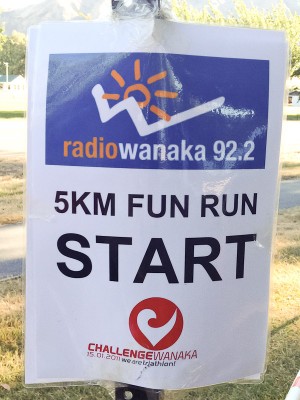 We jogged down to the lakefront and paid our 10 dollars each (about £9.50 pounds or so) for the two of us to register. The money all goes to a local cause so that’s good. Well over 200 people signed up for the run (or 5k walk) and it was really really warm.

When I went off for a warm-up Sharon kept an eye out for any serious looking athletes and she spotted a few out there. We had a race briefing where we were told that the course had changed slightly to make it a more accurate 5k and before long we were lined up.

Right in front of me were a group of young lads (early teens I’d say) and one of them had a Triathlon New Zealand Squad vest on! Hmn, this could be interesting!

So… the hooter sounded and away we went. A group of four pushed hard from the start and I thought I should try and stick onto them. After about a quarter of a mile I noticed that I was running about 5 minute 15 second milling, which is something like low 16 minute 5k pace. Not bloody likely I’d say!

I eased off slightly and dropped back to sixth place at a pace I was more comfortable with.

About a minute or two later a shout from behind us said “You’re going the wrong way!” - oops! We all turned around, then followed this chap (who was going mighty fast) as he led us back to the ‘real’ course. Sharon had run the correct course all along and it was only a large group of us at the front of the race (I mean fun run) that didn’t turn off at the correct place (the lack of a marshal or sign didn’t help!).

Anyway, back onto the course and before long the positions had re-established themselves and I was in sixth place and the fast guys were back at the front. At this point there were plenty of marshals in place and we were led in the direction of a golf course. We literally ran up a grass bank and across the middle of the course - including one of the putting greens from a hole. I was probably 15 feet away from a golfer as he just watched us all (whilst waiting to take his shot) run across his lovely course!! From here we headed off onto a lakeside path and into the grounds of a local vineyard.

Vineyards like to be positioned on hills. Oh dear. Next thing we were directed up a dusty path and it was hard going. The weather was baking hot - the sun was out and there was nothing ‘fun’ about this run! Well, it was fun but in a painful kind of way!

Eventually we headed back onto the path close to Lake Wanaka and back in the direction of the finish. I spent much of the race running close to the chap in 5th place and in the final km I edged ahead of him and pushed on to take 5th spot. The slight course ‘directional issue’ didn’t make a difference to the overall placings so that’s good.

It was a great fun event, lots of people at the finish supporting and spot prizes for a number of the runners (sadly Sharon and I didn’t win).

Sharon finished in 29:19 and her GPS said it was 5k spot on. Lovely. Her first words after finishing when I asked how it was were “Hot, it was hot.”

We then jogged (very) gently back to the campervan site, had dinner and watched the sunset. Lovely.